Michael Armitage: ‘Can an art space function in the same way as a chapel?’

Michael Armitage: ‘Can an art space function in the same way as a chapel?’

The artist weaves multiple narratives to evoke the complexity of East African society. Here, he talks about his exhibition The Chapel, at the South London Gallery, and how it gave him the chance to think about religion, spirituality and politics in a new way 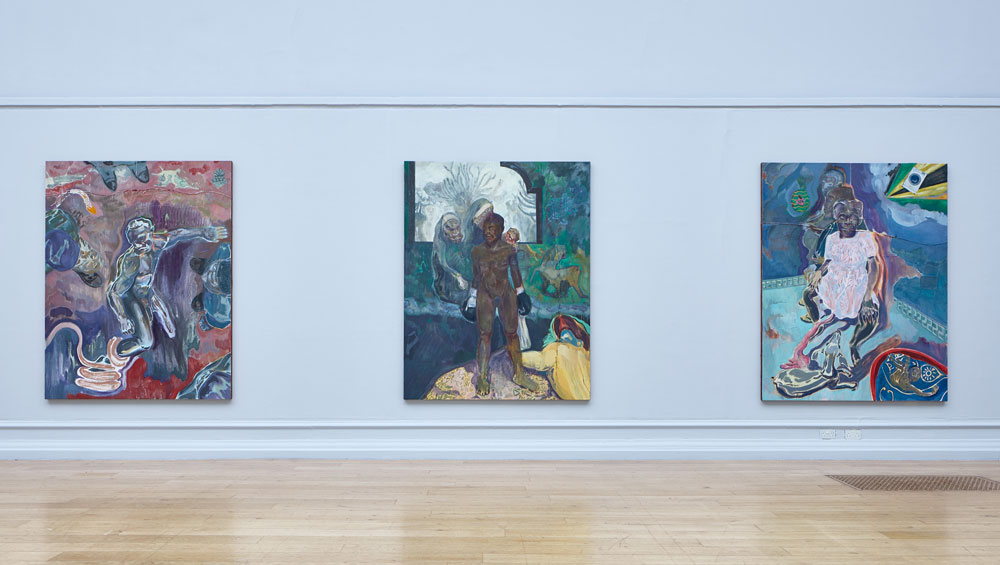 Michael Armitage was born in 1984 in Kenya and studied painting at the Slade School of Fine Art (2003-07) and the Royal Academy Schools (2007-10). Although he has been based in London since his student days, his work remains situated in East Africa. His current solo exhibition at the South London Gallery, Michael Armitage: The Chapel, absorbs the chapel-like qualities of the gallery space, where his paintings explore Kenyan culture and religion as the context in which to look at mental health issues in East Africa. The elegant large paintings made on Ugandan lubugo bark cloth, traditionally used as a burial cloth, also reveal the influence of western art history. His works are replete with stylistic traits of artists from Goya to van Gogh. In terms of their emotional tenor, his large paintings resonate with the drama of Paul Gauguin’s Vision After the Sermon (Jacob Wrestling With the Angel) (1888). The painting Nasema Nawe (“I’m telling you”) was inspired by the highly sexualised Baikoko dance in Tanzania; Gauguin’s masterpiece provided a visual means of exploring the significance of the dance.

Armitage’s paintings are physically beautiful, yet they address the controversial issues of the ethics of representation, of sexuality and mental health issues, in art and in the media, weaving multiple narratives to evoke the complexity of East African society.

Janet McKenzie: Your exhibition at the South London Gallery is confrontational, yet the way you have used the chapel-like space asserts a respect for the sensitive issues you have chosen to explore.

Michael Armitage: I was thinking about the South London Gallery’s main space having proportions that are similar to a chapel. It gave me an opportunity to work thinking about religion, spirituality and politics in a way that I hadn’t really done before. So, some of the paintings shadow Christian imagery and narratives while others are born of thoughts to do with spirituality and belief. I also had this question in mind: “Can an art space function in the same way as a chapel?” 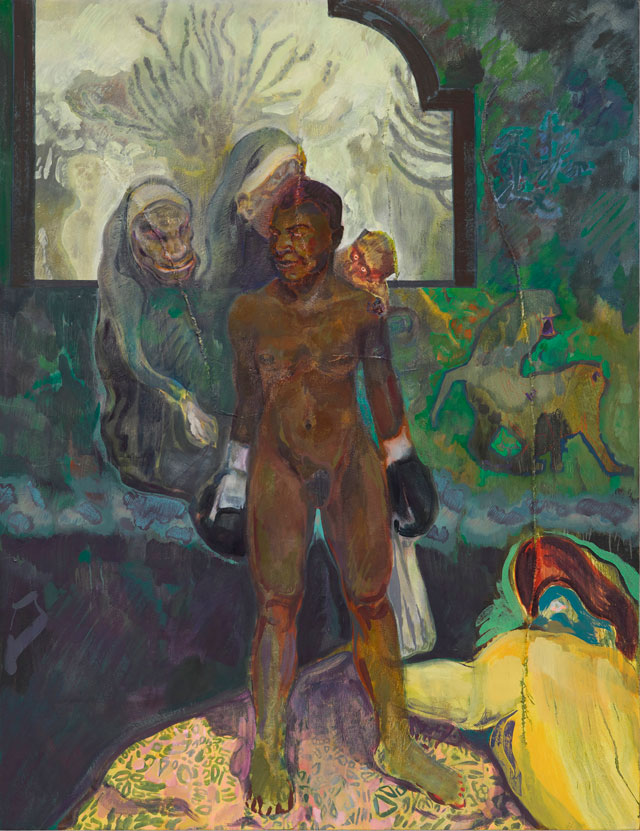 JMcK: You are addressing the invasive manner in which mental health issues are presented by the media in Kenya, such as the case of the former world-boxing champion Conjestina Achieng?

MA: With the painting Conjestina Achieng, I wanted to have elements of the painting that suggested that Conjestina, the central figure of the painting, had been given the role of village idiot by the local media (under the guise of public interest, she was repeatedly filmed and interviewed in an institution and at home while going through episodes of paranoid schizophrenia). This led me to Jean-Antoine Watteau’s painting of Pierrot, a fool figure who is often mocked yet always trusts his tormentors: by using this composition, I wanted to draw parallels between the treatment of Pierrot and Conjestina Achieng. 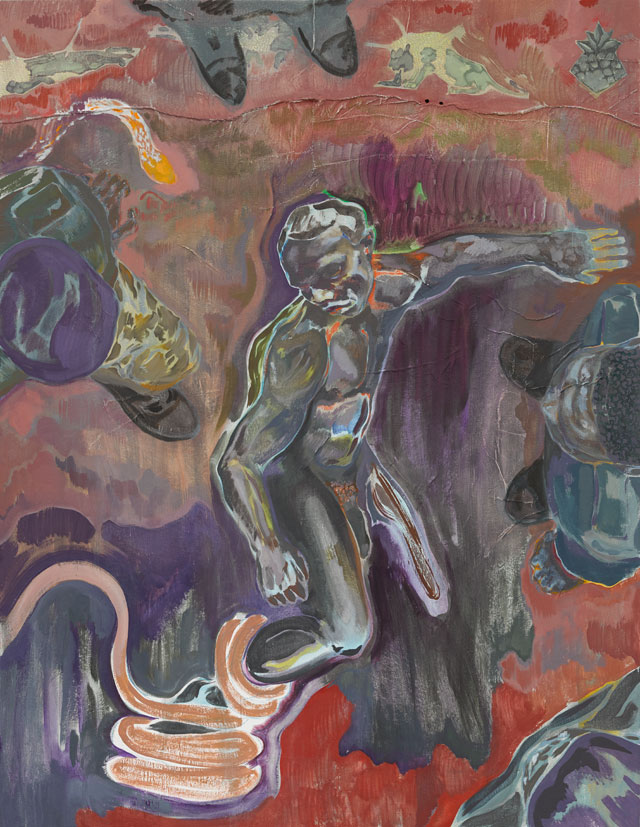 JMcK: What role can an artist play in Kenyan society in raising awareness of the limitations of the media and social problems?

MA: An artist’s role is defined by the artist and how they wish to live and express themselves. There is no set role for artists.

JMcK: You recently made a painting of one of the four terrorists who carried out the 2013 attack on the Westgate shopping mall in Nairobi killing 67 people including a group of children. What is the significance of the title: Hornbill (21st – 24th September 2013) (2014)?

MA: The title is in two parts: “Hornbill” refers to the folklore of a bird being the first creature to inhabit the universe, giving birth and then, soon after, dying, leaving her child grief stricken. From the sorrow of the little bird, the Earth was formed and the bird buried its mother in her beak, becoming the hornbill. Using the folklore and a stylised image of a hornbill, I made it the patterned structure of the painting that decorates the bar. It was a way to have the grief of the children who lost their mothers when the Westgate shopping mall was attacked during the filming of a children’s cooking programme represented in the painting. And “21st – 24th September 2013” was the date of the Westgate shopping mall attack.

JMcK: The painting Necklacing (2016) is based on your witnessing the horrific practice of necklacing when you were young, while Accident (2015) has its roots in the fact that you miraculously survived a plane crash with your family. Your paintings are a synthesis of abstract and figurative, romantic in appearance, that might belie the confrontation of mortality at such a young age.

MA: My own mortality has never really bothered me, whereas the loss of a loved one has much more profound effects. Either way, I don’t know how helpful autobiographical links are to the narratives in my work, but, when I make a painting, experience and memory does play a role in choosing images or the composition. 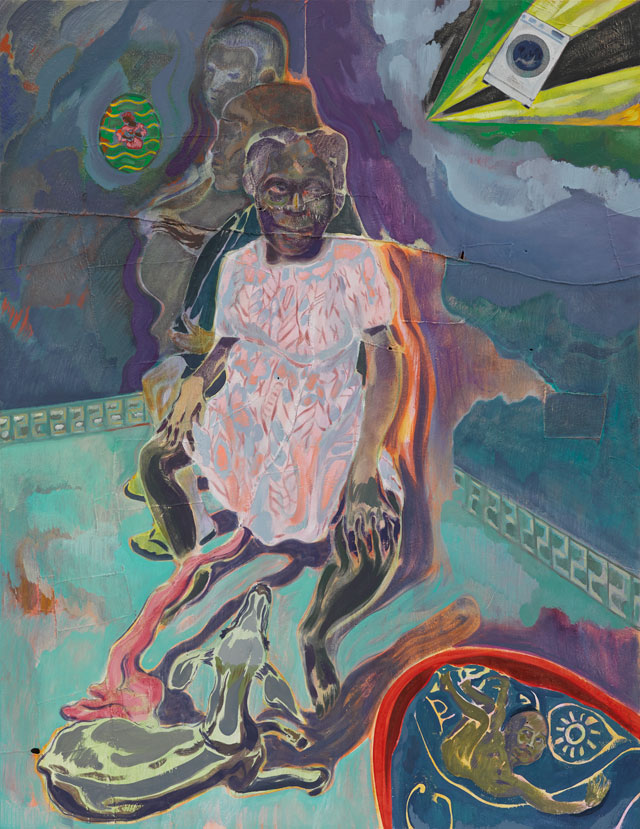 JMcK: You have recently instigated an African arts event of great significance. Can you explain how you came to organise The Gathering and how you hope it will evolve?

MA: The Gathering is a space for artists that are from, or are working in, Africa to get together outside an institutional or commercial framework. The emphasis is on the growth of critical discourse and to provide a space for artists from different parts of the continent and at different stages in their careers to get to know each other. We had 52 artists and practitioners from 12 countries come together for a three-day retreat. We are in the process of organising the second Gathering and hope it will continue to happen every 18 months to two years.

• Michael Armitage: The Chapel is at the South London Gallery until 23 February 2018.