This first survey show for the artist features work from 1989 to 2015 and reveals the experimental nature of her use of scale, colour and materials 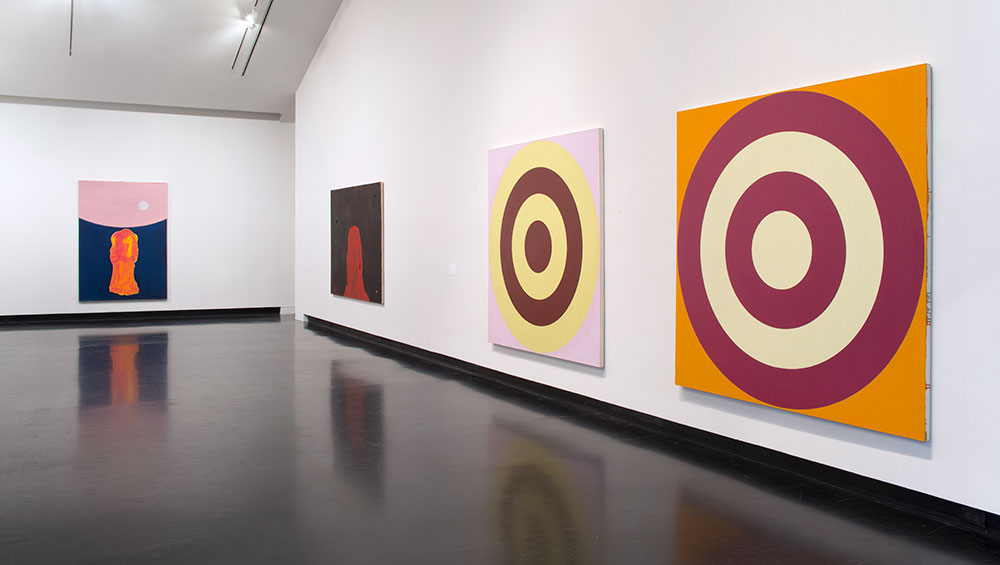 Mary Weatherford: Canyon-Daisy-Eden seems to be an exhibition full of conundrums and oppositions. On the one hand, the paintings seem bold, even confrontational; on the other, there is a certain reserve, elusiveness and ambiguity. Ranging from abstract to representational, the silken to the roughed-up, their imagery hints at secrets, their surfaces strewn with private symbols and encoded visual language, clues to more biographical readings. Titles and text matter, although they, too, are enigmatic. Canyon-Daisy-Eden, Weatherford explains, are the names of paintings and, together, they form a brief poem. But I suspect that Weatherford is an unreliable narrator, deliberately so, and that the mingling of the fictive and the real constitutes a great part of her work’s pleasures, of its uncanniness and resistance to revelation at the same time as it reveals. 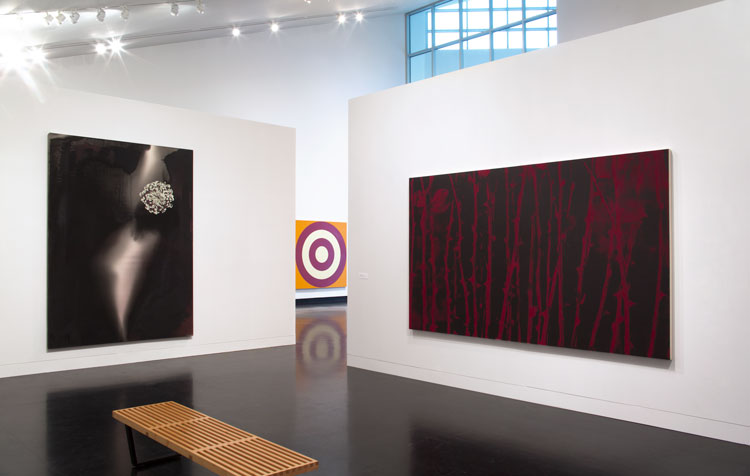 Opposition also applies to scale. The paintings’ assertiveness is due partly to their size. Several here are three metres (10 feet) across, and she can go much further. Weatherford has said that she has always been comfortable working large. But then she might zoom down to formats a couple of handspans in measurement. More than two dozen of such (mostly) smaller works are installed together salon-style, functioning like a lexicon of her practice. Or she might detail, placing objects such as sponges on the painted surface, just so, or tiny shells and the minuscule starfish that abound, say, in the immersive, blue-washed vertical, 10.26 (1998), which Weatherford uses as an emblem of self-regeneration and healing, of recurrence. She elides sea and sky, water and air in this ethereal, levitating painting, and the starfish become stars, myth. 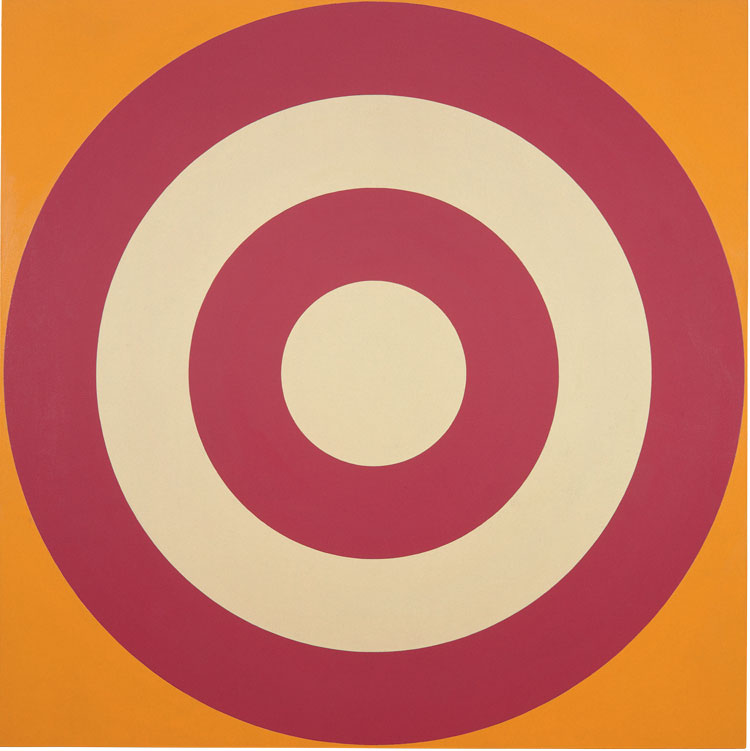 This is Weatherford’s first survey exhibition. Co-curated by the Houston-based Bill Arning and Ian Berry, the director of the Tang, it is on view at the Tang Teaching Museum and Art Gallery at Skidmore College in Saratoga Springs until 12 July, and features work from 1989 to 2015. The earliest are a pair of handsome target paintings and part of a series based on opera and ballet heroines, their geometry accompanied by a story. The canvases, alternating broad rings of slightly raised yellow and maroon on a monochromatic ground are a nod to Jasper Johns and Cady Noland, although not intentionally, Weatherford says.  But provocatively titled Nagasaki, the targets also conjure the city destroyed by the dropping of the second atomic bomb three days after Hiroshima as well as the setting for Puccini’s Madam Butterfly. In addition, the circles suggest tree rings, or “circular time,” as Arning describes it, the peg on which the overall installation is hung, and not on a chronological order. The works, Berry adds, are visible from several vantage points within the divisions of the gallery to encourage a sense of continuity that is not strictly linear in sequence. 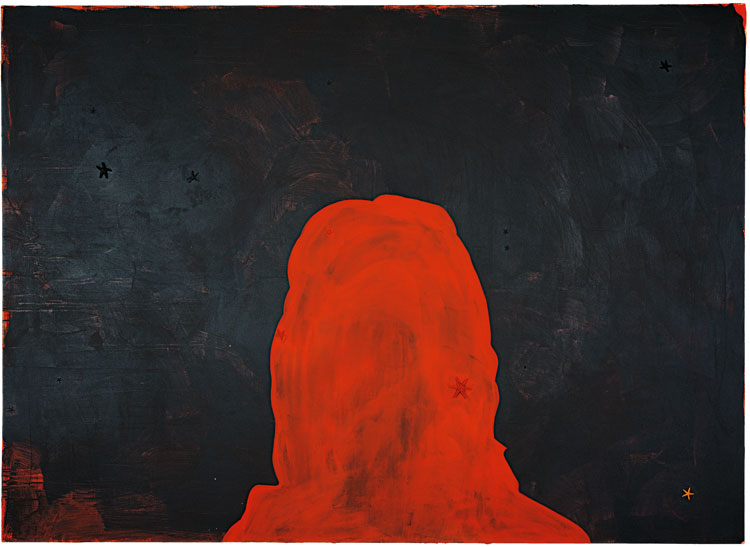 From the Cave Painting series, there is Big Red Margaret Head (1997). It’s the first and portrays what seems to be a solitary giant head. Occupying nearly a third of the picture plane, wrapped in a red scarf (we might think burqa today), it seems to look into the beckoning, seductive blackness of the ground. It is named for her sister and pinned with a starfish, its poignancy all the more powerful since the feeling it emanates is mercurial, as it reverberates between intimations of mortality and immortality, of agency and fate. 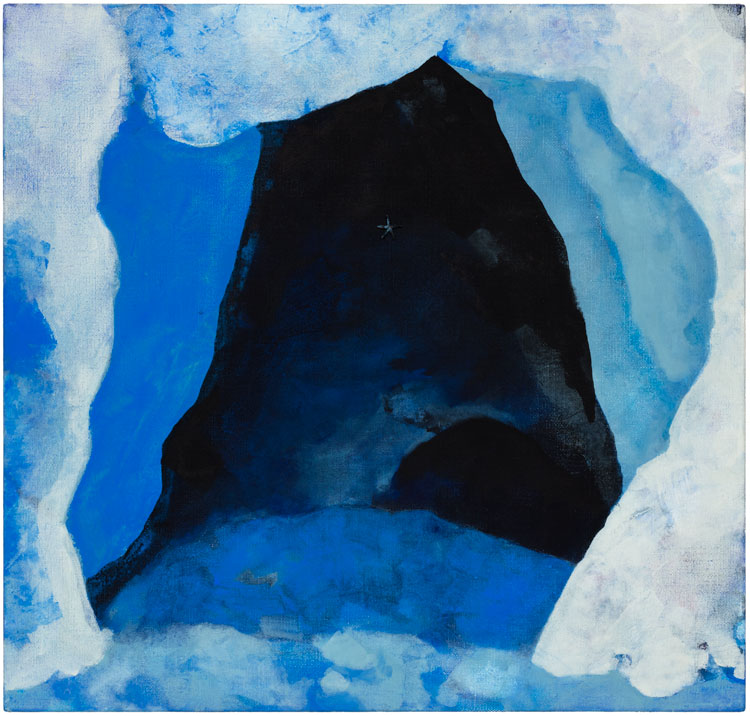 Another from the series is Georgia (2010), in shades of blue, black, white and grey, named for O’Keeffe, in which the central space of what suggests a grotto is both a void and opaque, sheltering and yet ominous. It reminds us that grotto is a corruption of crypt and also the root for grotesque, grotesquerie, linked to the irregularity of forms that characterise the baroque and rococo. 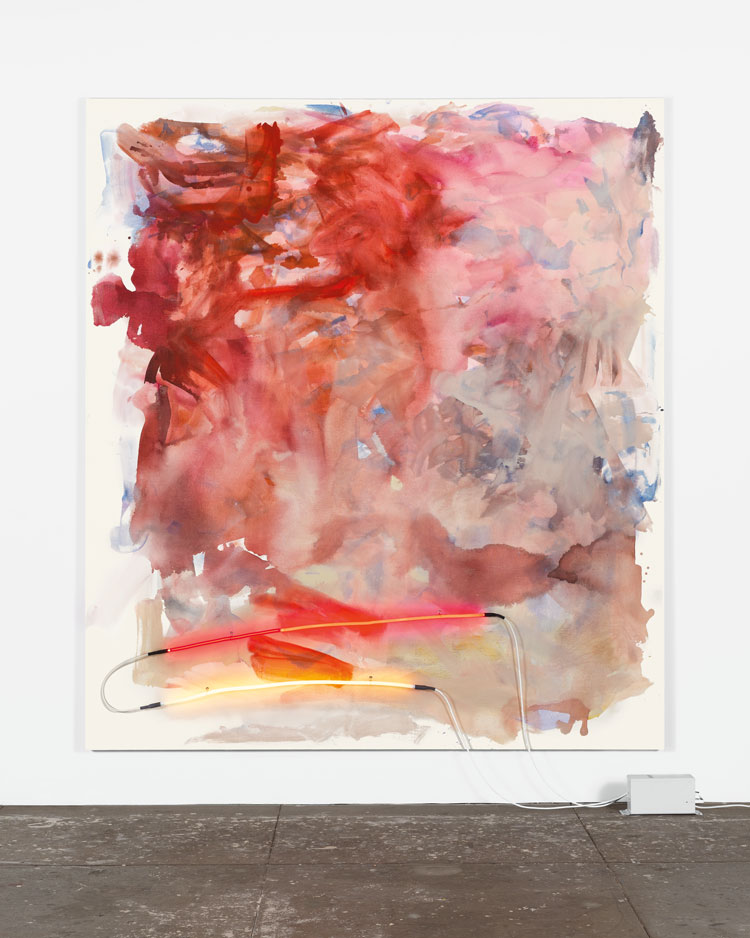 But it is the three works from the series begun in 2012, the Bakersfield Project (shown at Gagosian Chelsea in 2018), that are the highlights of the show. Inspired by the bright illuminated signage of the city, Ruby 1 (Thriftimart) (2012), Canyon (2014) and Lovely Day (2015) are made of marble dust stirred into white gesso for subtle shimmer and Flashe, a signature medium, which Weatherford loves for its malleability, richness and range of colours. The paint is sponged, smeared, poured, wiped, going from gossamer to matte, the colours strung across the spectrum, mutating from diaphanous to plush to dense patches of paint to bare support, in conversation with Helen Frankenthaler and Joan Mitchell, among others. To these surfaces, slender neon-filled glass rods, which are made to order, and their dangling cords are added, like three-dimensional line drawings hovering in space, emitting sizzling, quicksilver streaks of luminosity, the urban intersecting with nature, her own lightning fields. They also made me think how site-specific Weatherford’s work is, how steeped in romanticism, there at the edge of the continent where American dreams begin and end. 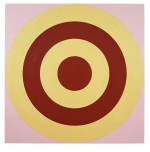 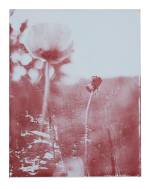