In this gem of a show a handful of Yiadom-Boakye’s paintings and etchings beckon you into their space, captivating you with their imagery 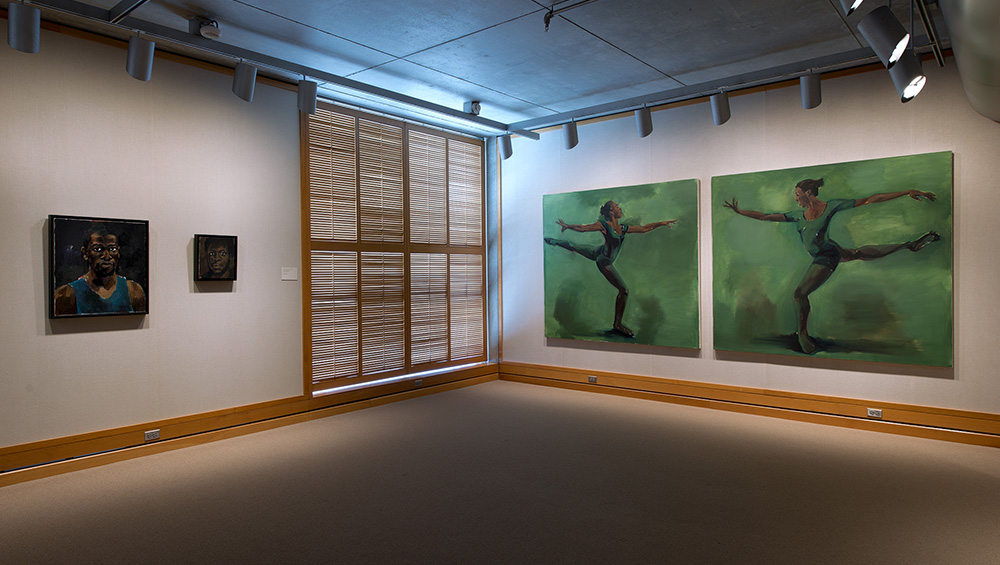 Lynette Yiadom-Boakye’s gem of a show at the Yale Center for British Art (YCBA) is just right – not too big, not too small. Curated by Hilton Als, a Pulitzer Prize-winning author and a longtime staff writer for the New Yorker (in conjunction with the artist, the centre and its chief curator of collections, Matthew Hargraves), it is the second in a series of three dedicated to contemporary female artists working in the British Commonwealth. Its impact is all the more potent for that distillation, in which less is more rewarding, a pleasure rather than slog. These paintings and etchings from 2012-2018, beckon you into their space and, once there, you are able to give them quality time, captivated by the imagery, the suave, lissom brushwork, the deftness of the mark-making.

The highly acclaimed London-based British-Ghanaian artist (whose work was on view at the Ghana Pavilion’s all-star debut – which included John Akomfrah, El Anatsui and a pavilion designed by David Adjaye – at the Venice Biennale this year, as well as in a slew of other highly visible venues) seems to be on everyone’s radar of late. She calls herself a portrait painter, although that might seem deceptive at first, since portraits are usually defined as likenesses of actual people, painted from life – or photographs – and all hers are non-existent, as she also emphasises. Yet the designation is purposeful, since they are likenesses of people she invents, retrieved from memory or found images, the “portraits” ultimately determined by the process of painting and its requirements. Yiadom-Boakye (b1977, London) seems to feel her way through the painting, brushstroke after brushstroke, gesture after gesture, confidently but with sensitivity, attuned to her medium. Raw and refined, she is known to complete them quickly once she begins, often in a day, alla prima.

She has said that because these people aren’t real, that “gives me freedom … But they’re not fantasies either, they are the reality that is the painting.” And while they are not portraits in a narrow sense, they can be read, speculated on, decoded, identified with as we would parse a portrait, a novel or a biography. She considers herself as much a writer as she does a painter, her poetry and prose published in her catalogues to accompany her paintings. Words and paint together form the language that informs her art, her elliptical titles also integral to that exchange. Thanks to authors and artists, we often know invented personae better than real ones, since we are privy to their acts, thoughts and feelings in ways we can’t know people in reality, no matter how close they are to us – or perhaps because they are so close to us.

In these half-dozen paintings, Yiadom-Boakye’s increasing mastery of her medium is unmistakably evident as is her interest in western representational painting of the late-19th and early-20th centuries. Her works, often compared to Sargent, Whistler, Manet, Hopper and others – she cites Chris Ofili and Lisa Yuscavage as contemporary influences – are as luxuriantly, sensuously painted as theirs, but with an edge, a deliberate dissonance that has formal and metaphorical implications. The streaks and glints of bright white that pop out here and there are the most arresting, but dabs of pink, a spot of red or green also appear in unexpected places, like pinpoint detonations lighting up her muted colour schemes, suggesting that darkness is complex, multi-hued and luminous. Her “small fry”, as Henry James called his creations, are no longer the caricatures of her earlier works, but more fully realised, ravishing in their physical prime – and acutely conscious of self. Some are the midst of an action, such as Harp-Strum (2016), a diptych, the most instantly eye-catching of the works on view, occupying an entire wall. Two dancers face each other, joyfully, triumphantly extended in an arabesque, their bodies tensed, ready, it seems, to leap into the other’s picture plane. Their energy is reinforced by the ground, a storm of lush greens warmed and cooled, advancing and receding, opaque and translucent.

Another, Amber and Jasmine (2018), in a medley of bewitching colours, catches a swimmer on one knee, preparing, most likely, to dive into a pool that is beyond the frame of the picture. One hand cups her chin, deep in thought, her eyes downcast, as if considering multiple strategies, the athlete as thinker, a fusing of the vita contemplativa and the vita activa, her position, amusingly, a little like Rodin’s Thinker.

Others are more wholly contemplative (although there is always an ambiguity in the scene), such as the gorgeous 1 pm, Mason’s Yard (2014). The stylish woman in it sinks into her opulently upholstered chair, her white floral-patterned dress dissolving into its similar fabric. There is so much to delight in here, such as the exquisite heap of white brushstrokes draped delicately across her knees (dress), and the staccato of red, then white (polished toes, bare feet), resting on furred gold (rug), toggling between the precise and the vague, abstraction and representation in a dialectic tug. Her hand, too, touches her face (Yiadom-Boakye’s hands are characteristically eloquent). But is she pensive or does she hear something, someone offstage? Is she as much at ease as she seems? The ground is divided into three converging planes of clouded colours, just enough to indicate space, a room, but nothing too specific as it, too, slips into the abstract, another of the artist’s hallmarks.

Greenhouse Fantasies (2014) presents a man in a teal-coloured tank top, the painting otherwise composed from tones in an impressive range of browns and blacks, with other colours layered beneath. The expression is wary, watchful, questioning as he looks directly at us, his lips imperceptibly parted, a focus on eyes and lips seems to have engaged her almost from the beginning. The eyes here are exaggerated, a dense bright white, as if ironically acknowledging a cliché, the slur about the whiteness of black people’s eyes against the colour of their skin. The palette of The Needs Beyond (2013), a closeup of a male face, is equally rich and even darker, except again for the startling whites of his eyes. He, too, looks hard at us, subtly confrontational, reversing the query, questioning who we might be.

The wonderful sequence of black and white etchings installed in a grid, are works in their own right, not studies, and balance out the show. They are equally tightly framed, like headshots, composed from a flurry of scratchy, incisive lines. At first, they blend into each other, but soon enough, they emerge as disparate personalities, challenging us to see and acknowledge their individuality and diversity.

I have not mentioned that all the represented figures are black, but anyone who is familiar with Yiadom-Boakye’s work would know that. We don’t discuss the fact that all the subjects in a Whistler or Hopper painting are white (unless they are ancillary, usually the hired help, as in Manet’s Olympia, say, as pointed out in the current exhibition Posing Modernity: The Black Model from Manet and Matisse to Today, at the Wallach Gallery, Columbia University). We talk instead about the paint, light, style, about beauty, and about existential states, moods, about anomie, isolation, longing, power, about settings and the story. Shouldn’t we approach these particular paintings from the same point of view? Isn’t that partially the artist’s intent? To be black or a person of colour is not a distinguishing, predictive characteristic. Neither is it to be white. We need a finer mesh, a more perceptive lens. I doubt if we are there yet, but Yiadom-Boakye insists on her fictive creations’ familiarity as human beings as much as on the colour of their skin, their presence essential to an updated, more encompassing, more factual, full-spectrum canon.

• Lynette Yiadom-Boakye: The Hilton Als Series will move to the Huntington Library, Art Museum and Botanical Gardens, San Marion, California, from 25 January to 11 May 2020.