The Norwegian artist, an uncompromising but vital talent, was the deserving winner of one of Europe’s major art prizes

Vanessa Baird’s work has a truly visceral power: the frenzied intricacy of her drawings mesmerise with the skill and intensity of their execution, while the content often elicits the opposite response, featuring disturbing narratives of debasement, perversion, chaos and despair.

This November, Baird, who was born in Oslo in 1963, emerged as the deserving winner of Norway’s biggest art award, the Lorck Schive Art Prize, with a work that embraces big issues, both political and personal. With 15 wallpaper rolls of intensely figured pastels unravelling across a room within the Trondheim Kunstmuseum, Baird’s I don’t want to be anywhere but here I am offers a truly immersive experience of exterior and inner turmoil. Roiling seas ripple over one wall with graphic vigour. The waves’ repetitive intensity, so pleasing to the eye, resembles medieval Japanese woodblock prints with their tranquil blues, greens and blacks. And then you realise that these oceans are awash with drowning asylum seekers. These figures have been styled, says Baird, on characters from the now discredited postwar children’s books Little Black Sambo; Baird loves to subvert childhood’s quaint or fairytale narratives.

The elongated vertical vistas progress over three walls, from ocean through dark forest  - populated by a trio of drunken bears, a gang of priapic gnomes and a Goldilocks hanging by her neck from a tree - to domestic interiors. These latter are claustrophobic, Alice in (nightmare) Wonderland landscapes of collapsing rooms, toppling furniture, peopled occasionally with female bodies splayed, half-naked behind grubby armchairs, or proffering themselves, in exhausted resignation, pants around their ankles. The floors are awash with household flotsam: half-eaten meals, half-read books and discarded clothing.

The work was prompted initially by a 2014 trip to Calais, where Baird and her companion took a wrong turn and ended up on the outskirts of a refugee encampment. The bleak, rudderless lives of these displaced, largely African, immigrants sparked her interest, though she points out that she began these drawings in January 2015, when this narrative was not as ubiquitous or alarming within the world’s news media as it is now; Baird’s art has a knack of touching raw nerves, predicting or imitating the news agenda in ways that have unforeseen repercussions.

When she began the Lorck Schive series, she says: “I wanted to make it like sea, sea, sea all the way through. Then I got sick and tired of doing the sea; it takes hours. Then I did the home situation, which is more like my house.” She gestures to the scenes of domestic disorder. Is home life quite so hellish? “It’s familiar and boring and the same things over and over again,” she says. “I live with my mother, my sister, her daughters and my three kids in this tiny house [she points to a compact, wooden, two-storey house on one page]. We have hardly any money.” The dark and confessional intensity of these drawings is, she says, cathartic. “It’s like sticking everything together in your own life, mending things, putting all your frustrations and whatever down on the papers. It’s a very nice way of using your life.”

The Lorck Schive Art Prize will hopefully buy a few creature comforts. At 500,000 Norwegian krone (£38,000), it is one of the biggest prizes in Europe. This is only the second time that the Lorck Schive Trust, established in the 19th century by a Trondheim philanthropist, has focused on giving a large pot of money to one artist, having joined forces with the Trondheim Kunstmuseum first in 2013 in order to do so. Previously the trust had dispensed its largesse entirely in smaller parcels (though these small parcels continue to provide a lifeline for young and emerging artists). The prize is intended “to generate interest around contemporary art by honouring a particular artist,” says Johan Börjesson, director of the Trondheim Kunstmuseum. “This prize shows what Norwegian contemporary art can and should be.”

As a showcase for Norwegian art, the three other shortlisted artists certainly demonstrate its quality, diversity and substance. All have chosen works that engage with major world issues. Oslo-based artist Ane Hjort Guttu’s documentary-style film Time Passes (previously shown this summer at the South London Gallery) holds a quietly perceptive mirror up to the affluent west’s inability to come to terms with the raw face of poverty and displacement, and the limitations of political art as a response, through her narrative about a young Norwegian art student who befriends a beggar.

Jana Winderen’s immersive sound installation, The Wanderer, features hydrophone recordings made in the deepest part of the Atlantic, sharing with us the eerie and guttural, other worldly soundscape of the largely unknown environments where species often die out before we have even discovered them. This haunting and occasionally menacing soundtrack is played out in an entirely black room, mirroring the depths from whence the recordings came.

The third shortlisted artist, Snorre Ytterstad, likes to use mundane and familiar objects to provoke questions around bigger, social or cultural issues. His two room installations here – an exploding star of black umbrellas suspended by string from the room’s corners, and a full-height fence made of high-strength steel cordons – are meditations on barriers and boundaries.

Baird’s work is placed in the room next to Hjort Guttu’s, adding a heightened atmosphere of menace to the work, and in the same space as a permanent relief by one of Norway’s leading sculptors, Gustav Vigeland, created in response to the battlefield turmoil of the second world war. Its title, Hell, makes it an apt companion to Baird’s dystopian landscapes. But she did not choose this room for that reason. With deadpan humour, she says: “I chose it for the floor.” She thought the blue marmoleum, copiously stained by a recent leak, would complement her scenes of watery distress.

The winning piece took Baird 11 months of intense activity, scribbling from dawn to dusk on her kids’ bedroom floor. She didn’t plan what she would put into the landscapes. She says: “I don’t spend a lot of time thinking about it, I just do it. I fall into the paper.”

The prize, she admits, is a welcome vindication for her practice, coming two years after she became a household name in Norway for all the wrong reasons: in 2013, a large commission she was completing for a government building threw bureaucrats into a panic because one scene was felt to be rather too evocative of the terrorist attack in 2011 by Anders Behring Breivik. So the work was never installed – it has, however, found a home in the headquarters of the Arts Council Norway.

There was certainly a sense of rightness, on prize-giving night, that the Norwegian art world was rewarding Baird for her uncompromising vision. Katya Garcia-Anton, director of the Office for Contemporary Art Norway, who presented the prize, called her work: “The heartfelt expression of an artist who is finding herself in very particular circumstances as a human being in the world. At once personal and political, it is a refreshing alternative to coolness.” 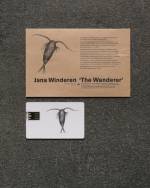 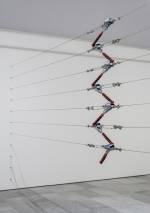