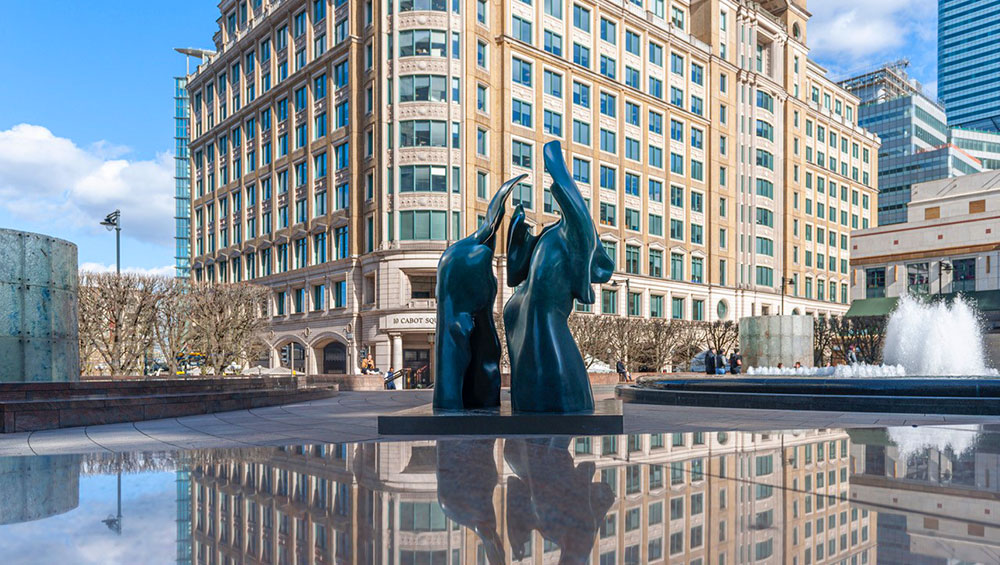 Lobby, One Canada Square and at Westferry Circus, Cabot Square, Jubilee Park and Wood Wharf, London
16 March – 26 June 2020 (the works were viewed before the Covid-19 restrictions were in place)

Even before you see the forms, by their very titles – Metamorphosis, Fortuna, Ascent, Spirit of Life – you can understand why developers might be drawn to Helaine Blumenfeld’s sculptures. It makes sense that those speculating on the (re)invention of parts of a city would hope that, by placing these vibrantly titled works at strategic points, they might conjure those vital qualities of human spirit and energy missing from their masterplans, like a form of sculptural socio-geographic acupuncture. Certainly, within the bland, bombastic, corporate architecture of Canary Wharf – a piece of city invented in the 1980s out of bombed docklands - such life is needed, especially after the coronavirus crisis has turned it into a ghost town.

Blumenfeld (b1942) is no stranger to the site: her five-metre high bronze Fortuna has been in Jubilee Park since 2016. For this show, it has been joined by a new permanent commission, Metamorphosis. With its blue-green, undulating bronze surfaces, this hefty, monumental sculpture evokes droplets of water caught in freeze frame as they plummet to the ground. It is placed in Wood Wharf, gazing out towards the rippling expanse of the Thames and adjacent to the hoardings advertising the next area lined up for the Canary Wharf Group’s regenerative ambitions – Wood Wharf is to be a new quarter with thousands of new homes, nearly 2m sq ft of office space, plus new retail and leisure space. But right now, it is just a building site – hence the obvious appeal of the sculpture’s name.

But Blumenfeld’s sculptures are every bit as powerful as the symbolic or mythical qualities their names conjure. One of the UK’s leading contemporary sculptors, she has been honing her technically extraordinary, impossibly fluid, organic and mythical forms that dance across the border between figurative and abstract for the last five decades. Her mastery of form and material, whether in bronze, marble, wood or terracotta, secured her the honour of being the first female to be awarded the world’s most prestigious sculpture prize, the Premio Pietrasanta a la Versilia nel Mondo, in 2007. The US-born artist, now mainly UK based - though with studios in Pietrasanta and Cambridge - was awarded an honorary OBE in 2011 and was the subject of a Sky Arts documentary in 2018: Hard Beauty: Helaine Blumenfeld.

This exhibition is the largest solo exhibition of Blumenfeld’s work yet. Alongside the dozen huge pieces scattered around the corporate campus’s parks and squares, there are more than 20 works in the vast lobby of One Canada Square – architect César Pelli’s statuesque, 50-storey monument to Mammon in glittering glass, steel and marble; the winking aircraft warning light on top of its flattened pyramid roof is visible across the city, day and night, flagging it up as the premiere office chess piece on the Canary Wharf board.

Speaking with Blumenfeld over the phone from her Cambridge studio and home, we marvel at the strange, unprecedented times we are now inhabiting. Her work was being installed just a week before the UK was placed under (voluntary) social isolation measures, a week before all schools, galleries, museums and non-essential retail were shut down. She is undeterred.

“In a certain way this is the right moment for this exhibition,” she says. “I almost named the exhibition Toward the Precipice.” In fact, there is a sculpture of that name as you enter the lobby of One Canada Square whose angled planes articulate extraordinary tension, as if arching over a cliff edge. She says: “That was really the driving force of this whole exhibition, the feeling that our society is heading towards a precipice. And, in a sense, I feel that’s where we are now. For me, the precipice is to do with so many things … it has to do with empathy and communication between human beings – we have so many opportunities through technology to come together, but we haven’t. We can have so many different perspectives, but we’re all human, we’re all in it together. Suddenly to be plunged into this moment is quite amazing for me. In the end, I didn’t call this exhibition Toward the Precipice, because one of my sons said it was too negative. He said: ‘All your work is about looking up, towards the spiritual world.’ And I realised that Looking Up is a good title, too. This (situation) isn’t it: this isn’t the whole world. We can look up and see another way of communicating, another way of empathising with each other. I’m feeling quite positive about it. In fact, (the exhibition) couldn’t have come at a better time. People who have seen the outdoor works have been communicating with me. They have told me this work has given them solace.”

Until I spoke with Blumenfeld, I didn’t see the exhibition that way at all. For me, walking around the lobby of One Canada Square, on a bleak and drizzly Wednesday afternoon in March, this glitzy setting seemed to be at odds with the undoubted humanity and vivacity of these pieces. There was too much dazzle and distraction, from the disorienting, triple-height volumes of the lobby to the glare of security-bright spotlights beaming down from 20-metre-high ceilings and bouncing off the thick, polished slabs of marble that line the walls and floors. In theory, this marble-tiled lobby could be a nice foil for the marble, bronze, wood and terracotta sculptures that have been assembled here.

But as the economic and social structure of the world around us was collapsing, there seemed something obscene about the juxtaposition of these flowing, billowing, sensuous pieces – such fluting, vulnerable, ineffable expressions of spirit – against this canvas of luxury, testosterone-fuelled bling. No matter how my eye wanted to hone in on the curves and contours of the sculptures, it was distracted time and again by the visual and sonic backdrop - a glowing Tiffany & Co shop sign here, a cashpoint visible there, the catastrophic economic news headlines marching along the bottom of the lobby’s flatscreen TV. None of this suggested a place for art and spiritual contemplation - a feeling exacerbated by the intermittent blip of the few remaining staff as they entered and exited the high-security glass gates guarding the lifts. It felt like a space so numb to the pain and struggle of everyday human life, the works seemed co-opted and commercialised by association. 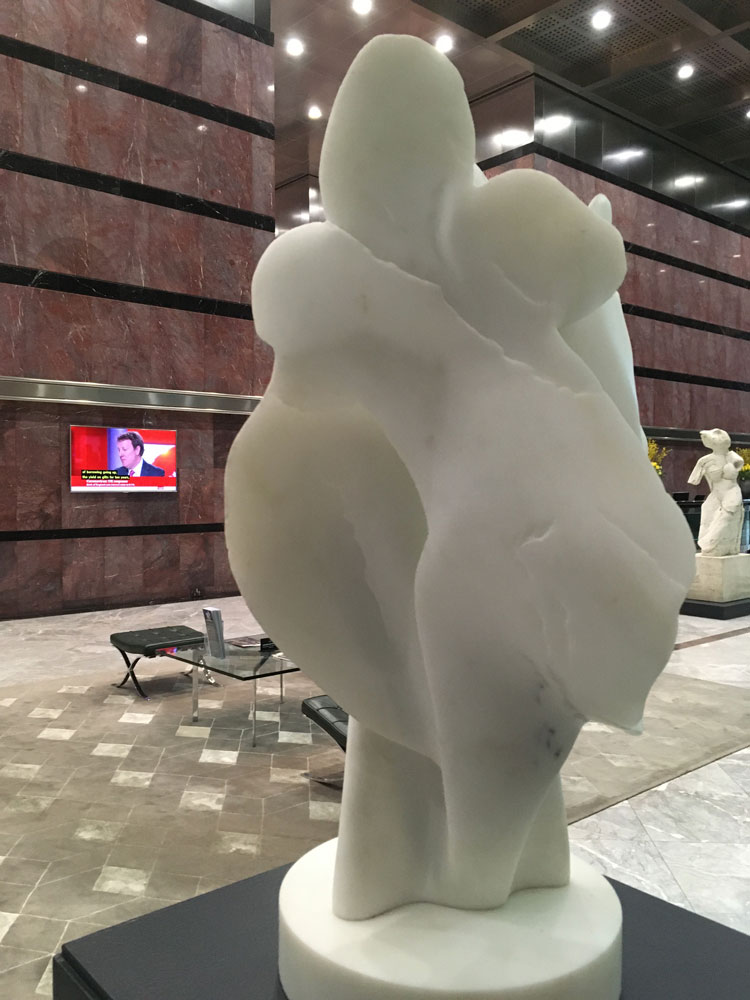 That is far from the spirit in which Blumenfeld hopes the works will be perceived. These pieces – which date from the 1970s to the current day - are not for sale, for starters; they are not meant to be tempting baubles for overworked, overpaid executives. “A lot of pieces were borrowed from collectors who were happy for us to have them. A lot of pieces came from my own collection of works from different periods, which I never want to part with.”

She hopes the humanity of these works might uplift and heal, or spark a different perspective. Blumenfeld is a great advocate for taking art out of the gallery and into public space to inspire new conversations and new audiences. She herself was directing the installation in the lobby – with her Italian assistants all detained in Pietrasanta, she had to clean and polish her own works - and this gave her the chance to discuss them with workers at the office tower. “People really liked the way we put the four bronze pieces at the far entrance, the standing pieces,” she says. “People were going in and out and talking about what they meant.”

She agrees, however, that the space presented challenges. Blumenfeld worked closely with the curator, Ann Elliott, to place the sculptures. “The orientation was very different from any other show I’ve ever done. The curator wanted to show the different materials I’ve worked in and how they will render the experience differently.” 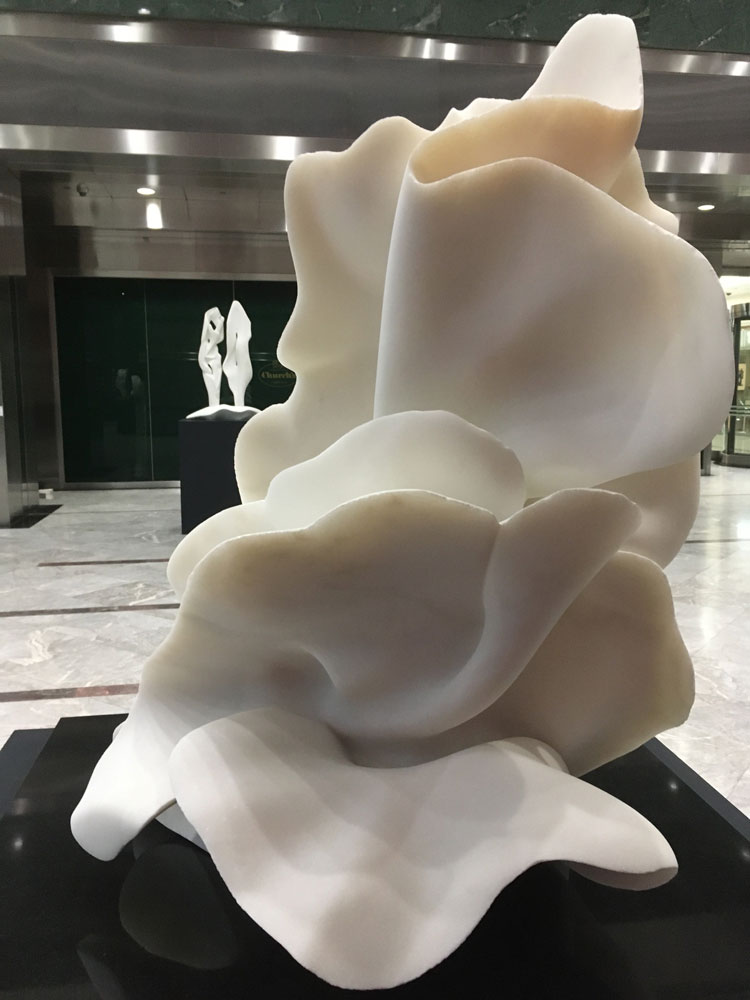 The works are organised in a meandering route around the lobby’s perimeter, on plinths, without barriers, to encourage interaction. In a Studio International interview from 2016 with Anna McNay, Blumenfeld talks about how she wants people to touch them, if possible. I did so freely, marvelling at the warmth and softness of the marble. Given the current health and hygiene warnings, I now wonder how advisable that was, and whether many more will (or should) do so.

At first viewing, the wood and terracotta pieces are the most immediately successful in this space, given the warmth and simplicity of the materials, in contrast to the high glamour of the polished marble surrounds; Taking Risks (2016), in particular, is a sinewy, sensuous explosion of terracotta curves. But Blumenfeld is confident that, for those who will see them most often, the pieces will quickly emerge and establish a presence. When this backdrop is normal to you, it no doubt becomes invisible, and I can see how - for those who pass through these glazed spaces on a daily basis - the chance to get to know and spend time with these works could bring joy and solace.

As for the exterior sculptures, they are placed singly or in clusters around the peculiarly charmless public spaces that are a legacy of Canary Wharf’s 1980s incarnation. There is a sequence of four white marble pieces at the north end of the site, nearest to the riverfront walkway, three of which seemed dwarfed by the towering bulk and masculine geometries of the surrounding buildings. The only exception was Taking Risks (2019), whose three-part configuration and inward-tilting curves hint at huddled or sheltering figures; it has a magnetism and warmth that invites closer inspection. Obeying Blumenfeld’s suggestion to get up close and personal, I found it a welcoming perch and shelter from the brisk March winds.

It is also worth hunting down the single bronze version of Illusion (2018), at the centre of the Canary Wharf site, set into the bleak, windswept circular podium at the heart of Cabot Square. The muscular, rippling movement that seems to pulse within its bronze flanks sets up a charismatic aura of intrigue and fascination; it is more than a match for the bland, bulky geometries of the surroundings.

Metamorphosis, at the far end of the site, is placed where Fortuna was originally intended to go. Fortuna’s location – within the one, pleasantly landscaped, tree-filled and peaceful area of the campus, Jubilee Park - was intended to be a space for rotating commissions. However, the workers and visiting residents really took to it. Blumenfeld says: “People just loved that piece there. So, they couldn’t move it without hassle because every day people come there to have lunch. Kids are drawn to it. It was a wonderful thing to discover. And, for that reason, I was commissioned to do the second piece, Metamorphosis.”

While Blumenfeld asserts that it is OK for the lyrical, very female spirit of her work to fight somewhat with this orthogonal, masculine setting, she is hoping that the second show, scheduled to open in early April at Hignell Gallery in west London, still goes ahead, for the contrast it will offer. “That show is called Intimacy. It’s such an important theme. I used to think about my work as all different themes. But now I realise it is very much about intimacy and connectedness - which is what intimacy is actually about, whether you are connecting with empathy to one person, or society or globally. This is where all of our social strands are breaking down. This is where the crisis has come from. If we can respond to this by coming together and seeing another future, we will have passed that precipice.”

• At the time of writing, Intimacy: Helaine Blumenfeld at Hignell Gallery, London, was scheduled to run from 2 April to 31 July, with entrance by appointment only. 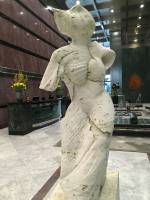