Lluís Lleó: ‘It was important to me that the sandstone came from Spain and that I made them there’

Lluís Lleó: ‘It was important to me that the sandstone came from Spain and that I made them there’

Lluís Lleó talks about how, for his recent installation on Park Avenue, New York, he was inspired to use stones from Europe that referred to the history of murals and fresco painting as a way of re-establishing a relationship between old and new worlds 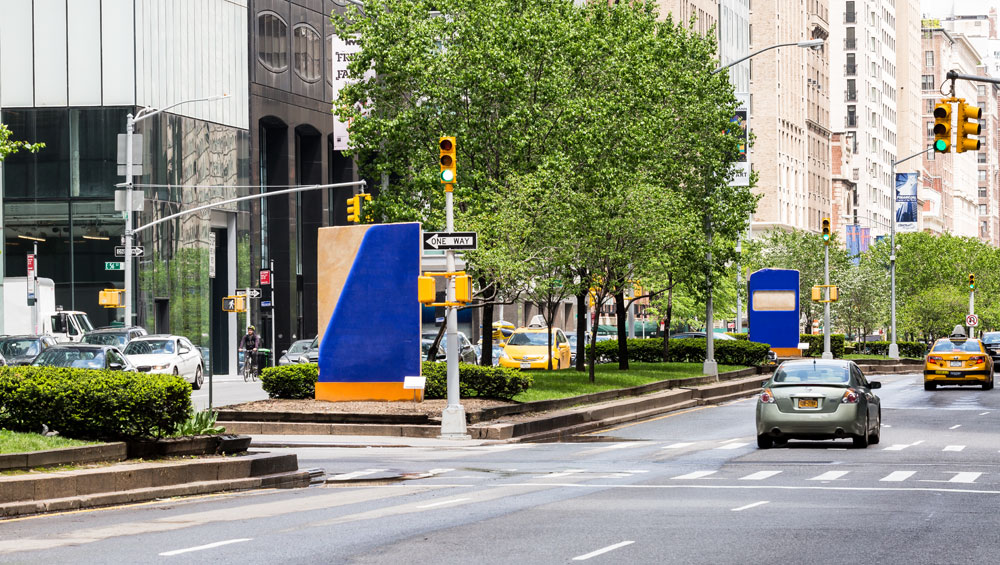 Lluís Lleó, who was born in 1961 in Barcelona and now lives in New York, comes from several generations of painters. He was greatly influenced by his father’s passionate interest in fresco painting and likewise smitten by it. For an installation on Park Avenue malls in New York (which was on view from 1 May to 31 July), Lleó created the site-specific Morpho’s Nest in the Cadmium House, consisting of five fresco-like paintings on sandstone sited along the fabled avenue, from 52nd to 56th Streets. Fresco paintings are usually integrated into the walls of the building, but here Lleós freed them from their architectural restraints to become freestanding reliefs – although he designates them as paintings. A more uncanny phenomenon is how, at first glance, they appear to be free-floating abstract shapes of brilliant colour. Whatever else they may be – and there are multiple readings – Lleó has turned a deft combination of painting, sculpture, design and architecture into sophisticated minimalist creations that reflect the contemporary inclination towards hybridised formulations, while pursuing a dialogue with modernism and the history of Spanish art. 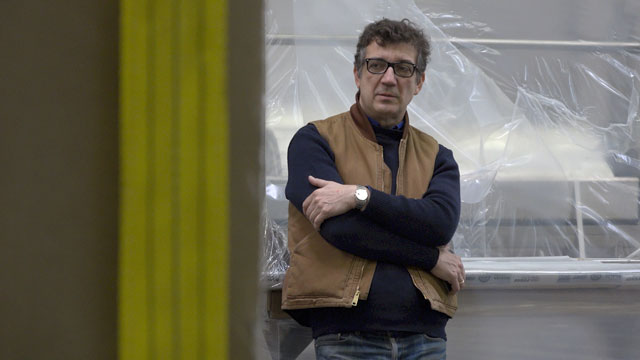 The following is an excerpted, edited conversation between the artist and Lilly Wei in New York.

Lilly Wei: How did this project come about? It is such a prominent venue so it must have been gratifying to see your work there.

Lluís Lleó: Yes, it is. I never thought about it as an appropriate location for my work because I don’t consider myself a sculptor and it is a place for sculptures. But one day, I thought that the painted stones I had been making could be a possibility. What also excited me about having work shown there was to have Mies van der Rohe’s Seagram Building in close proximity to my stones. I was thinking about the pavilion that he designed for the international exhibition in Barcelona in 1929. It is a modernist classic and I was interested in the relationship between his pavilion and more historical Catalan art. It is interesting to me that the Museu Nacional d’Art de Catalunya is not far from it. Thinking about it made me wonder how traditional art might have influenced his work. 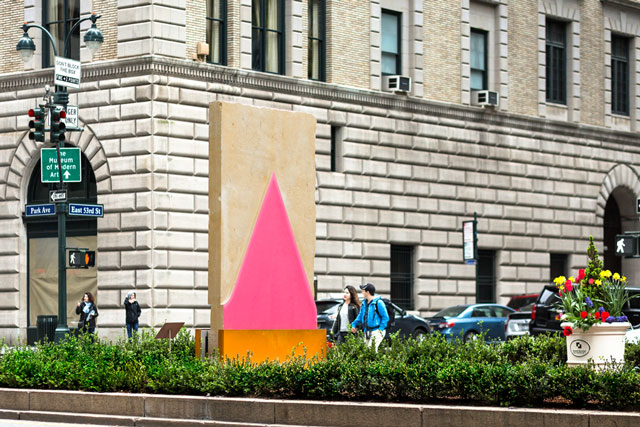 LW: So that was the beginning of the Park Avenue project?

LL: Yes. I was inspired to bring stones from Europe that referred to the history of murals and fresco painting – which goes back to the beginnings of civilisation, to Altamira and Lascaux, and bring them here. It was a way to re-establish a relationship between old and new worlds, the history of art and my relationship to that history.

LW: They look like paintings at first. We don’t see paintings outdoors very often, if at all, so it’s a bit of a shock.

LL: I come from a family of artists who have all been muralists or working in disciplines related to fresco painting. It seemed a challenge to make paintings for an outdoor site. How could I do that? What materials could I use? What techniques? What could survive the effects of weather and a highly urbanised environment?

LW: Painted stones were your solution?

LL: Yes. And it had to do with the many visits I made to the Metropolitan Museum of Art in New York. I always visit the Pompeiian paintings and the Egyptian tomb paintings when I go there. They were part of the inspiration that brought this project to life. They made me want to bring colour outside. 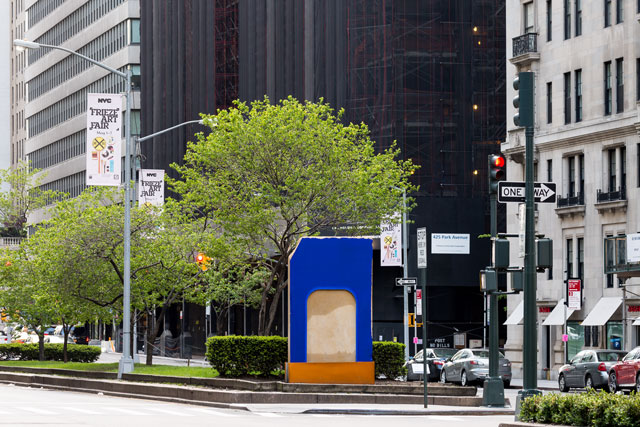 LW: You said you had been working on the outdoor paintings, on your stones, as you call them. How many previous versions have you made?

LL: This is the fourth time I’ve made such paintings. A Spanish collector with an important collection saw some small models of the stones and liked them. He asked me what I planned to do with them. I said I wanted to make them large and bring them outdoors. So he said: “Bring them to my garden.” That was three years ago. After that, his son also commissioned some stones for his place just north of Paris. Then I did an installation on Shelter Island on Long Island for a private collection in 2016, and now, this one on Park Avenue.

LW: And there was a jury?

LL: Yes, and the jurors saw images of the work in Paris and Shelter Island and said they had never seen anything like that before. It might look as if you had but, in reality, you haven’t seen paintings on stone in the middle of a garden.

LW: They seem to be minimalist abstractions. Would you talk about that?

LL: To me, they are very much a mix of Spanish and European traditions with American paintings such as those by Mark Rothko, Ellsworth Kelly and Agnes Martin. When I came to New York, I was fascinated by how they, and artists like them, could produce all these powerful images with such simplicity. I come from a place where the aesthetics are more complicated and it was amazing to see how they achieved such fantastic results by such simple means. 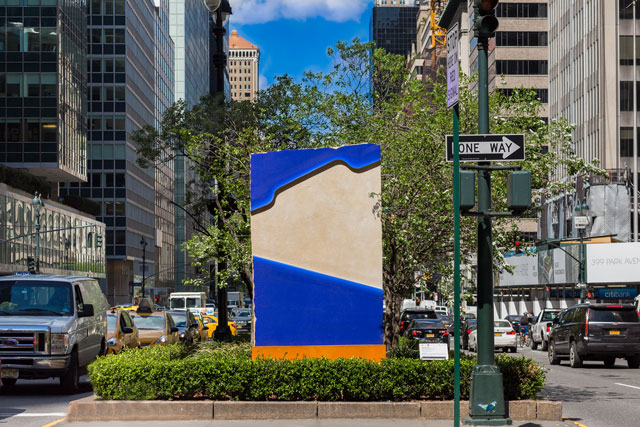 LW: Could you separate what is European and what is American in these works?

LL: The support and the way they are made are very European and refer to the history of architecture as well as art, but the composition is very much what I’ve learned by living in America for so many years. I’d say it’s a 50-50 divide by now.

LW: And would you talk about the idea of creating a freestanding mural or fresco?

LL: I learned from the Egyptians how to create the effect of three-dimensions by just a little bit of carving. Stone is also part of the tradition of the Mediterranean. Sandstone is abundant in Spain, and easy to work with since it is very soft. It was important to me that the sandstone I used came from Spain and that I made them there.

LW: Was it complicated to transport them here?

LL: Yes, it was. Sandstone is lighter than most stones so that helped, but it is also delicate. We had to figure out how to do it so that there was no movement at all during shipping; otherwise it would crack.

LW: You must have been nervous.

LL: I was, but everything worked out well even though it was very complicated. Only one was damaged, but not in transport.

LW: Was this the result that you imagined?

LL: I wasn’t sure what the effect would be. I’ve seen other works here and, if the scale was not grand enough, it sometimes didn’t work. I know my stones are not huge in that context – they are 11 feet high, 13 feet if the base is included, but I think the scale works. These pieces might not have suited, but I think they do. It tells me that the size of the work sometimes has nothing to do with the real size. It has to do with scale and presence. Viewers have told me they don’t think of them as small.

LW: Would you talk about your choice of colours, of the red and the blue? They are extraordinarily vivid.

LL: Red is a traditional Spanish colour, and I wanted to use cadmium red on one side; to me, it is the purest red there is. The other side is a saturated ultramarine blue, the shade most closely associated with the morpho butterfly. Again, old world, new world: it’s like two sides of a coin.

LW: Why the title Morpho’s Nest?

LL: I’ve been making a series of these, as I said. It’s a way to create places where butterflies can nest and spin their cocoons and make more butterflies. This one is called Morpho’s Nest in the Cadmium House.

LW: Your paintings are homes for butterflies?

LW: Are there butterflies on Park Avenue?

LL: Maybe, why not? I think of butterflies as a metaphor for the cycle of existence. The butterfly has such a short life but such an extraordinary transformation – from an egg to a larva to a pupa to a beautiful butterfly.

LW: And where do you go from here?

LL: I always wanted to be an architect when I was a student, so perhaps I will make a house of painted stone: four walls with another stone on top and paint it all blue. It’s something I want to work on, transforming it into a habitable space. It would revolve around history, around present and future, around many things.