This art exhibition in the Niigata prefecture, with installations by five Japanese artists, aims to shed light on an area that has little natural sunlight over its long winter.

A two-hour train journey north from Tokyo, the Echigo-Tsumari area is a testimony to the fact that humans can’t counteract the force of nature but have to embrace it. Here, for almost five months of the year, the fields and houses are blanketed with up to 3m of snow. In a place where farming is the main occupation, heavy snow restricts people’s lives: it is a difficult burden. Since ancient times, locals have faced the harsh winters and yearned for spring to arrive. The five artists in this exhibition have challenged the mood of the locals with art ranging from textile and lighting installations to interactive storytelling devices. Their aim is to change perceptions, to see the snow as a cause for celebration rather than something to be overcome.

Entering the Kinare building, which surrounds – almost embraces – a courtyard deep in snow, the visitor is welcomed by Liminal Air Space-Time: Wave by Shinji Ohmaki (b1971).

Measuring 5m x 18m, its featherlight white fabric floats in the air, creating a silhouette reminiscent of the local mountainous landscape covered with snow, but never keeping its shape, dancing as if the fabric were freed from gravity. “People living in an urban environment may not feel the gravity of the sky. People in the Echigo-Tsumari area, however, are suppressed by the gravity from the sky – snow. I wanted to relieve that feeling and show another perspective, of snow being beautiful,” says Ohmaki.

Takahito Kimura (b1971) in his work My Garden uses an interactive device, inviting the public to find a microcosmos, to see from a microscopic point of view. Kimura, whose underlying theme is “playing with Mother Earth”, has taken photos of his garden in the countryside from spring to summer. These records of nature are hidden in an LCD monitor with a plain white surface: viewers can discover the flora and fauna by holding a round polarising film disk over the screen. The LCD monitor acts like a field of snow, under which a microcosmos of flowers, grass and insects are waiting for spring to arrive.

The yearning for spring is also evident in an installation by Kyoto Takahashi (b1970). Outside the museum, during the evening, Scene with Flowers, projects on to the walls around the courtyard images of flowers taken by local people. The images turn the courtyard into a sort of flowerbed, reflecting the desire of people for the new season.

Another artist, Kei Nakamura (b1965) brings to light a masterful handicraft made in the region, which is the fruit of the deep snowland. His Isawa Washi Lampshade comprises lampshades made from the traditional Japanese paper isawa washi, which used to be crafted in the region only in winter during the period when people were unable to farm. The paper would be immersed in the snow field to give whiteness to the final product. An array of Nakamura’s lampshades surround the courtyard, glowing in the dark winter, hinting that beautiful handicrafts are the outcome of severe winter.

Takahiro Matsuo (b1979) shares life in the snowland from an anthropological perspective. He brings us back to the later period of Edo using a 19th-century picture book that illustrates, humorously and minutely, daily life during the snow season. Light Book – Hokuetsu Seppu, meaning archive of life in snowland, is an interactive book in which moving images jump out, as if characters from the 19th-century book have been transported to the 21st century. The expression of distress on a 19th-century servant’s face as he pulls a doctor in a sleigh across a field deep in snow, or the picture of groups of women drying fabric over a snowy field on a freezing day are vibrant and amusing depictions of how people lived through tough seasons.

Matsuo, who is a computer programmer as well as an interactive artist, also developed a lighting device, Snow Dance, that reminds the viewer of snowfall.

Seventy-eight acrylic tubes enclosing long strips of illumination board are hung from the ceiling like icicles. As they sense people moving around, they light up, giving the appearance of snowfall. Watching children who can’t read the caption and don’t understand the technology being mesmerised by the artwork is proof that snowfall is a phenomenon universally embedded in the human mind.

It is interesting to see that, although digital technology is a world away from nature, and few of the artworks in the show illustrate nature in deliberate way, viewers do understand that these artworks are about nature in the snowland. 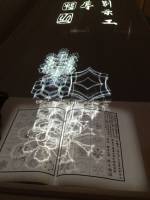 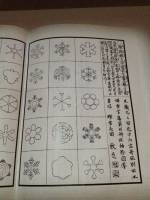