Kip Gresham: The Art of Collaboration

Kip Gresham: The Art of Collaboration 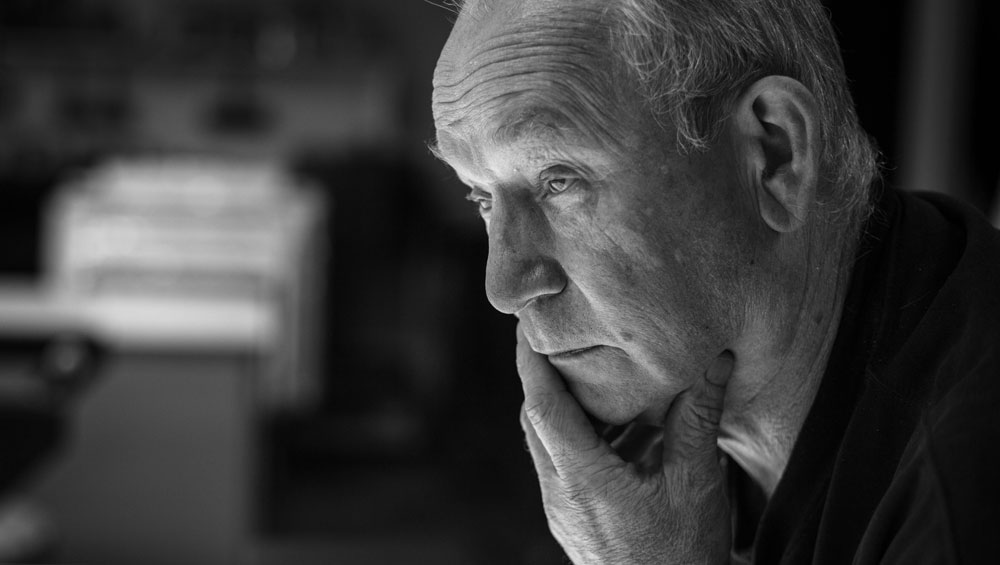 It is a chilly March morning when I visit the Heong Gallery in Cambridge and the dreary grey sky seems to speak only of winter. Inside the gallery, The Art of Collaboration, the exhibition of work made by master printmaker Kip Gresham (b1951) is like a breath of spring air, a veritable blast of colour, warmth and excitement. This is the Heong Gallery’s third anniversary and, for this show, it worked closely with Gresham to bring together some of the 2,500 editions and one-off prints he has made with collaborating artists over the past 40 years. 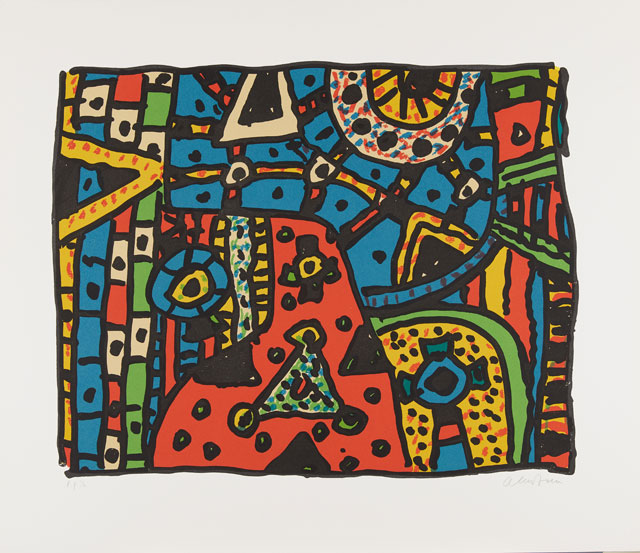 Gresham was previously director and master printer at both Curwen Chilford Prints (1989-94) and Gresham Studio (1994-2001). He established The Print Studio in Cambridge in 2002. In this collaborative, artists’ printmaking studio, Gresham is studio director and master printmaker. Working with artists, Gresham’s art as a printmaker is not only in supplying the technical expertise they require for a particular project, but in supporting them in developing and realising their vision. As the exhibition’s curator, Prerona Prasad, notes: “The prerequisites for a successful collaborative printmaker go beyond skill, willing and an attentive bedside manner.”1

In printmaking, the material surface is as important as the image itself and there are myriad decisions to be made about weight of paper, finish, colour, hue and opacity. Artist John McLean, one of Gresham’s collaborators, has commented: “It takes a virtuoso artist like Kip to deal with such stuff.”2

Facing you as enter the gallery’s anteroom are two stunning works by James Hugonin (b1950), Binary Rhythm (Dark Red) and Binary Rhythm (Indigo), both from 2012. Each work is composed of thousands of tiny, coloured squares supported by an underlying grid. What might appear to be a random, almost chaotic, collection of colour is nothing of the sort. Hugonin’s notebooks, displayed nearby, reveal that, in his preparation, he works as a musician creating a score, with each minute square defined in terms of colour, hue and intensity. What is perceived as chaotic in fact adheres to strict rules and a hidden order that supports surface disorder. Step back from the works and you understand something of their title as an underlying elliptical pattern emerges and seems to move rhythmically across the surface of the image. Hugonin’s rhythm is a clever choice with which to confront the visitor as they arrive. The subtle rhythm here is preparation for the main space of the gallery and the ripples of themes, materials, techniques and colours that run around the room. 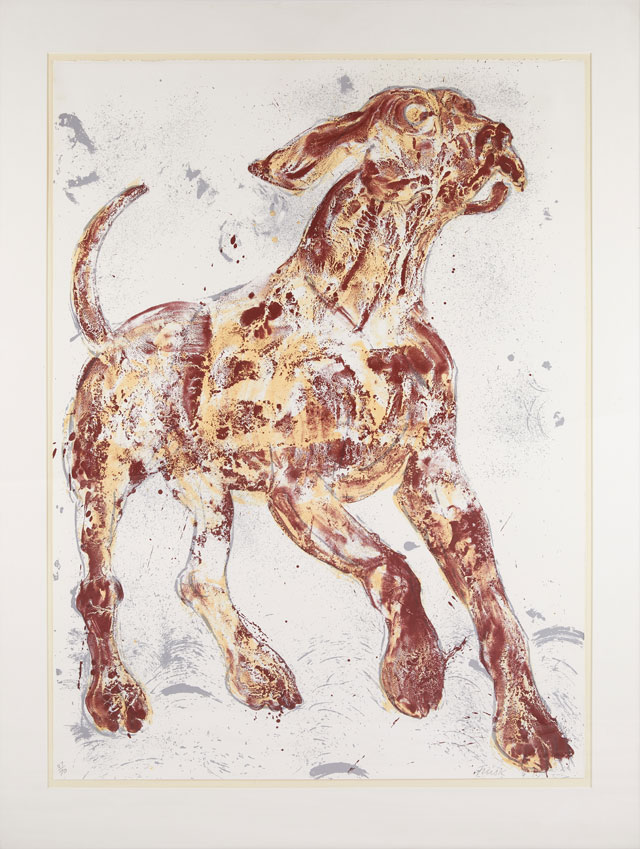 Elisabeth Frink, Dog, 1988. © The Executors of the Frink Estate and Archive. All rights reserved, DACS 2019.

The display begins as you enter the main gallery space, with two forthright works by Elisabeth Frink (1930-93). It is a visually arresting beginning and entirely appropriate, too, when you learn that the exhibition began from a shared appreciation by Gresham and the Heong of Frink’s work. Two of her screenprint from 1988, a monumental head and a dog (her first collaboration with Gresham), both full of breath and muscle, assert their physical presence.

The earliest works in the exhibition are by Gresham. Paper (1972) and Jig-Saw Action Replay (1973) are not set apart in any way, but embedded in the midst of the other works in the exhibition. It is characteristic of Gresham’s humility that this is so. The show is not about him, it is about his collaborations, but these two early works, made while he was still a student, foretell something of what was to come – the experimentation, the playfulness, the striving for excellence and the openness. These early works are emblematic of his interest in linguistics, of turning something readable into something unreadable, or at least readable in a different way.3 This playful engagement with the medium is sustained in Gresham’s collaborations where often everything is not as it seems. 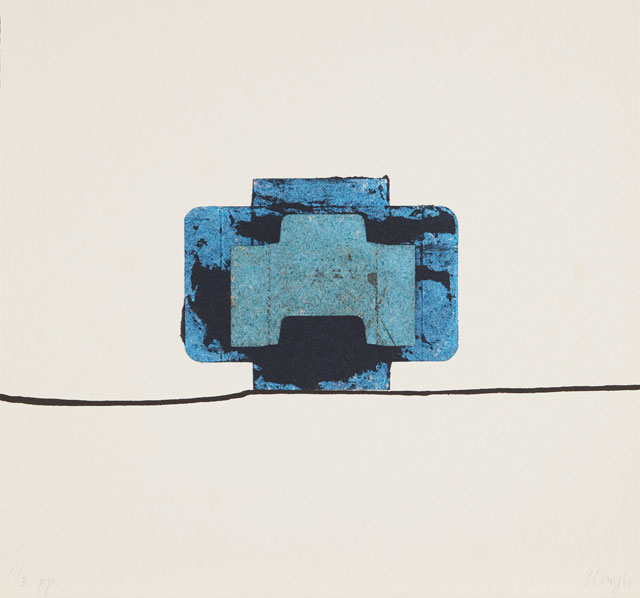 As you loop around the space, and just before you leave the main gallery space, you are faced with a cluster of pop-art works – Taste from Five Senses (1999) by Joe Tilson (b1928), some of the Sources of Pop Art 2 (1999) by Peter Blake (b1932) and six works by Eduardo Paolozzi (1924-2005) whose Monotype (Nine Heads; 1995) is especially interesting in its conception. Gresham tells me that Paolozzi deposited a collection of images with him and requested he put them together. On Paolozzi’s return, the artist cut up Gresham’s work and collaged the images together again. Forty layers of printing later, the nine heads emerged.5

This exhibition is small in scale, as dictated by the available space, but what it achieves is no mean feat. It gives rare visibility to the work of a master printmaker and, in the 61 works on show covering 40 years of his career, what we have is a pretty good history of, largely, British art. There is figuration, abstraction, playfulness, seriousness, the multiple and the monoprint. Everywhere colour abounds in what amounts to a wonderfully uplifting collection of works. 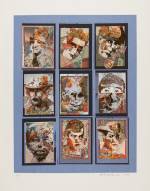 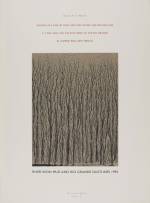