The painter Kaoruko is a slight, softly spoken Japanese woman who walks with inaudible steps and has a gentle, unassuming manner. Her large, airy canvases depict women – laying down, standing up, relaxing, playing, striking poses or just being there, beautiful, sexy and enticing.

Her paintings are striking in their subtle combination of tradition and innovation: even though she uses centuries-old Japanese styles with their emphatic geometricity and flatness to arrange the pictorial space, her subjects are arrestingly contemporary and appealing in their carefully arranged scenes of blithe abandon. A former teenage pop star, Kaoruko is cognisant of the seductive pull of pop culture and the power that puts it in motion: sex appeal. Her work skilfully combines tradition, pop culture and personal experience to create a captivating visual universe.

Natasha Kurchanova talked to Kaoruko at her studio at Mana Contemporary in Jersey City.

NK: This is a beautiful studio. How long have you been here at Mana Contemporary?

Kaoruko: I came at the invitation of the Eileen S Kaminsky Family Foundation and have been here for a couple of months.

NK: I know you exhibited in the United States before – for example, in October last year you had an exhibition at the Mike Weiss Gallery. Was it the first gallery to represent you in this country?

K: No, it was my second gallery and third exhibition. The first exhibition was [in 2007] at Ethan Cohen Fine Arts and since then I have had two exhibitions at Mike Weiss.

NK: When you first came to this country, it was through a gallery, correct?

K: When I signed a contract with Ethan Cohen Fine Arts, I was based in Japan and I commuted. Then I obtained a visa and decided to make it more permanent.

NK: It must be a huge culture shock to be in New York. Are you making yourself comfortable little by little here?

K: It was a struggle. When I first came to New York, my studio was my house. I did not go outside, I just painted. But now I get to go to New Jersey and it makes me happy, because I have a chance to see other artists. It makes assimilation a little easier. Previously, my assistants were all Japanese and I did not get to speak any English.

NK: Are you here indefinitely, or for a certain period?

K: I have not made up my mind yet.

NK: Your subject is almost exclusively women. They are young women – I would call them nymphets – in intimate settings and situations. The women are contemporary, but your technique looks steeped in tradition. It is interesting for me to see how you blend the contemporary subject matter and the traditional technique. So, I want to ask you why you paint women like this and how did you decide on the technique?

K: My subject matter, actually, is karma and love, life and feminism expressed through a woman.

NK: Has it always been like this? Have you always painted karma and love, life and feminism expressed through a woman, even in Japan?

K: Yes, even in Japan, I always painted those subjects projected through women and never men.

NK: Is it because, for you, those subjects are associated with a woman?

K: An artist can work on different subjects – for example, on scenery or abstract painting. For me, it is a woman. In the United States, you have pop culture and pop singers, such as Britney Spears, for example. In Japan, we have a similar phenomenon in a very different culture. In America, it is the strength of the sexes that is expressed in pop culture, but in Japanese pop culture, a woman must be cute and pretty.

NK: So, Miley Cyrus would not be a Japanese ideal of an attractive woman?

K: In Japan, we say kawaii, which means cute, to describe this kind of sexual attraction exemplified by a woman. Female sexuality that is preferred in Japanese culture would be fragility and cuteness. And it has to be healthy, too. I mention this because I was a pop singer when I was a teenager. I myself was formed as a woman by being viewed in this way, by incorporating the “third eye”, the gaze of the viewer. Because a woman is regarded as an ideal of sorts, as a pop star, I had to act in a way that projected that ideal. So, even though I am a woman, when I work, I look at my subjects from a third-eye, objectifying point of view.

NK: Could you tell me why you represent this kind of femininity?

K: Women are the same in their inner core, whether they are in the United States or Japan, even though in Japan on the surface the culture demands the show of fragility and cuteness. I see that this is really universal. In fairy tales, such as Cinderella or Sleeping Beauty, the princess has to fight for the prince charming. In today’s world, we also have to fight for what we want.

NK: So, after your career as a pop singer ended, you turned to making art. Where did you receive your art training?

NK: Are you self-taught then?

K: My childhood dream was to become a painter. This was my dream from the age of four.

NK: Before coming to New York, did you exhibit in Japan?

K: Yes, from when I was in my late 20s. In Japan, there is not as much demand for art as in the United States. So, there I was a painter and I also worked as an illustrator and produced media characters for TV companies.

NK: Do you still do this now, or do you only do painting?

NK: Are you working for any particular project? Is there an exhibition coming up?

K: I am just working – it’s a work in progress. I am working on a series of paintings now about the  spirit of a pop star wandering into a land of fairy tales.

NK: Do you use models for your painting or is it all from your imagination?

K: Yes, I use models. They are my friends. I invite them to my house. I think about the poses in advance and then I ask them to assume these poses. I photograph them and then I paint. My next subject will be a storyline about a pop star wandering into a fairy-tale world with her friends. I want to express her spirit. She will be a princess. I think that in fairy tales the protagonist is around 16 years of age. Pop singers are around that age as well in Japan. Fairy tales taught people about sexuality and established rules of sexual education. This is what I believe. Girls that age want to be women, but they are not, and they have that yearning, the inner anxiety. Whether they are fairy-tale princesses or pop stars, they are not mature women, but they still have that core inner strength, which makes them want to go after their dreams, be it a prince or fame and making them reality. This desire is what I want to express in my work.

NK: Do your paintings usually have a storyline or is it one project that you have just described?

K: My exhibitions are usually built around a concept, but when I paint, I usually do not use storylines for my works. My last exhibition, ENN, made me realise at a very profound level that we are all alive in connections with others. They could be our soulmates or the product of our karma. I feel that if people are moved by my paintings, there is also a connection. One of my paintings is titled Nyotaimori, [the practice] of men eating food such as sushi and sashimi off of a woman’s naked body, which is used as a food board. I painted that woman as a goddess of mercy. You might feel that it is influenced by feminism. I express feminism as a positive element in my work.

NK: I see some paintings do not have figures – they are purely decorative. Here, the influence of traditional Japanese art styles becomes particularly pronounced. Are there styles that influenced you more than others?

K: To produce decorative patterns in my work, I use silkscreen to copy a kimono pattern from 300 years ago. It is done manually: artisans transfer the pattern from the kimono on to a piece of paper and then I transfer it on to the silkscreen. I have been influenced by Ukiyo-e, a Japanese style of woodblock printing, which flourished during the Edo period, 200-300 years ago. It has flat, clearly defined areas of colour, which characterise my work as well. Ukiyo-e images also demonstrate a subtle colour gradation technique, which I apply in my work. There is no chiaroscuro in my work because, in Japanese painting, we use lines instead of shadowing to convey depth. Japanese Manga, a style used in animation, uses the same technique. In my last exhibition at the Mike Weiss Gallery I showed paintings that used gold leaf. This was also a traditional Japanese technique, known as byobuga, which was also created about 300 years ago. In byobuga works, there are usually clouds painted in gold. I use these golden clouds in my work to give the viewer the sense of distance. Also, in byobuga, the daily life of people who lived at that time was depicted. In my work, I also paint the daily life of women. So my works connect history and today’s world in several ways: through using the kimono patterns, painting the daily life of women, and applying stylistic devices of byobuga and ukiyo-e to depict contemporary subject matter. 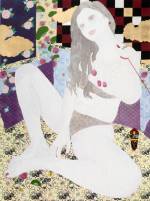 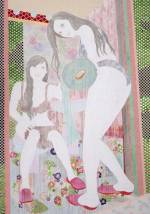 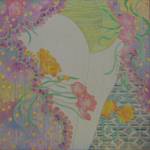 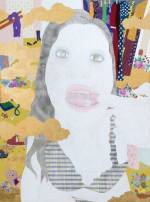