Joy Labinjo – interview: ‘When people speak of multicultural London, it’s something you can really see in Brixton’

Joy Labinjo – interview: ‘When people speak of multicultural London, it’s something you can really see in Brixton’

For her first public commission at Brixton underground station, the young London-based artist reflects on the importance of the hair salon in her own life, as well as within black British female culture more widely 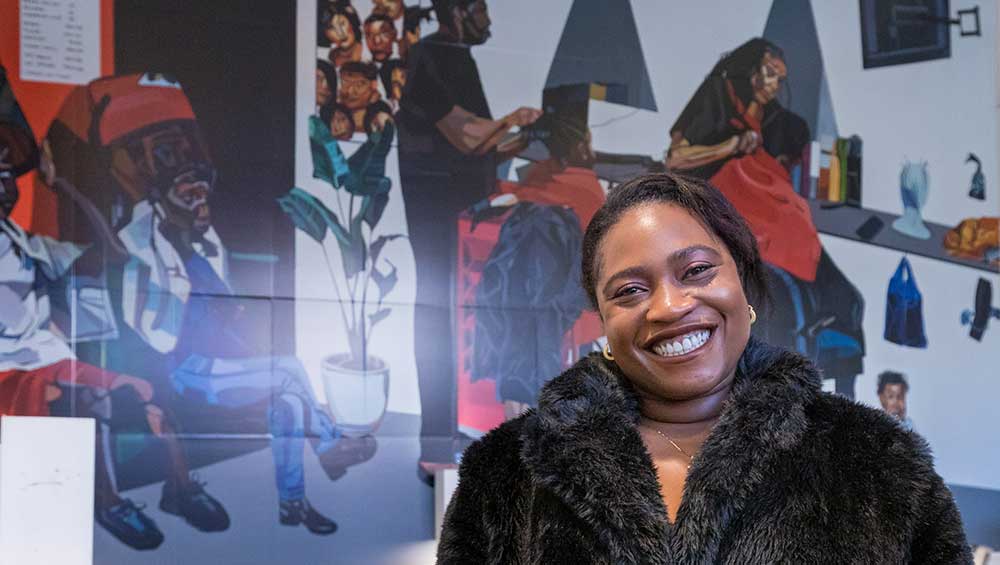 For her largest painting to date, Joy Labinjo chose to make reference to an interior space that has been something of a focal point throughout her life: the hair salon. Taking the form of a mural, recently installed inside Brixton tube station, in south London, 5 More Minutes was commissioned by Art on the Underground and recreates how this important community outlet might appear on a typical Saturday morning. As well as noting the personal significance of hair salons to the artist – before she set up her studio in Brixton three years ago, for years Labinjo used to travel there to get her hair done – the vibrant work alludes to the pivotal role they play in the neighbourhood’s Afro-Caribbean community, and their thriving presence, despite the area’s gentrification over the past two decades. 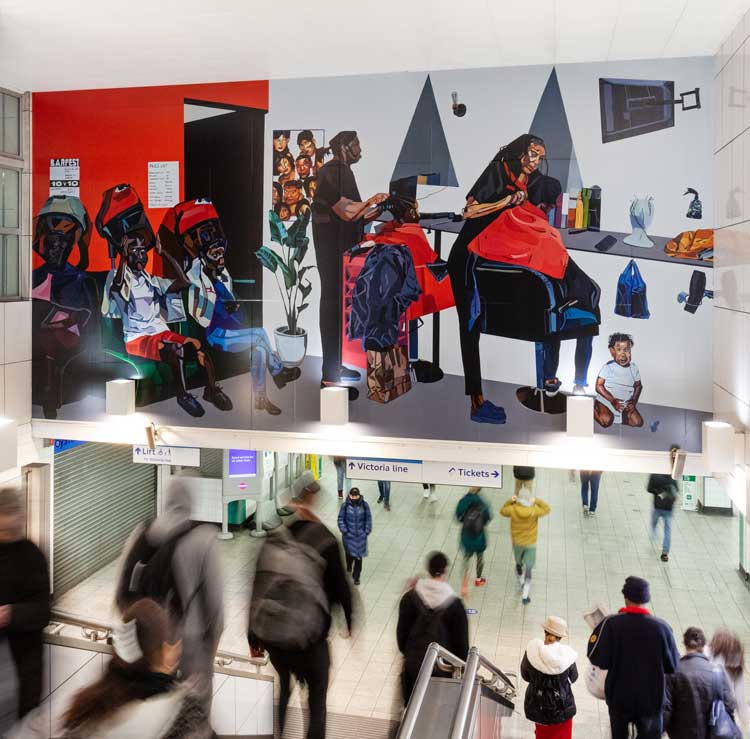 Labinjo, 27, who was born and raised in Dagenham, east London, to Nigerian parents, and graduated from the University of Newcastle in 2017, has so far developed a body of work that navigates issues relating to identity, race and history. Often focusing her compositions on intimate, domestic scenes, Labinjo’s portraits of friends and family incorporate flat, fractured segments of gleaming, saturated colour, which result in paintings that are as precise as they are expressive. Following a solo exhibition at the Baltic in 2019, Labinjo’s work was included in the 2020 Royal Academy Summer Exhibition. The artist is currently completing an MFA at Oxford University’s Ruskin School of Art.

Allie Biswas: What were your impressions of Brixton before undertaking this commission? Did you have an existing relationship with the area?

Joy Labinjo: I did, yes. By the time my commission came around, I had been working from my studio in Brixton for three years and had been visiting for much longer. I also had the luxury of seeing the previous commissions in situ and knowing what I was working with.

I love Brixton, it’s the first place I settled in London as an adult, and I think it has a great energy. You walk out of Brixton station and can just feel it: the smell of food in the air, incense burning, somebody singing, dancing – or doing both at the same time. There is always a lot going on. When people speak of multicultural London, it’s something you can really see in Brixton.

AB: 5 More Minutes depicts the interior of an imagined hair salon in the community. What was your process for deciding to make this the subject of the work?

JL: I had originally planned to visit the Black Cultural Archives, based in Brixton, and use that as a source of inspiration, planning to take things from there. I ended up making the work during lockdown, so I didn’t have access to any of the things I thought I would but was limited to the internet. I began with two paintings because it was a lot of pressure for me to do just one and hope that would be it. The first was a multigenerational black family in a living room, like my earlier works but set in the 1960s/70s. The second was the salon, which was my wild card and a painting I did because I’d always wanted to, while also thinking that it reflected my version of Brixton. For the longest time, I thought it would be the interior painting that would be completed. I was finding the salon painting harder because I had less source material, but a friend came to visit and told me that the salon one “is Brixton”. Once decided, I abandoned the living room painting and worked solely on the salon painting for the next five or six weeks. 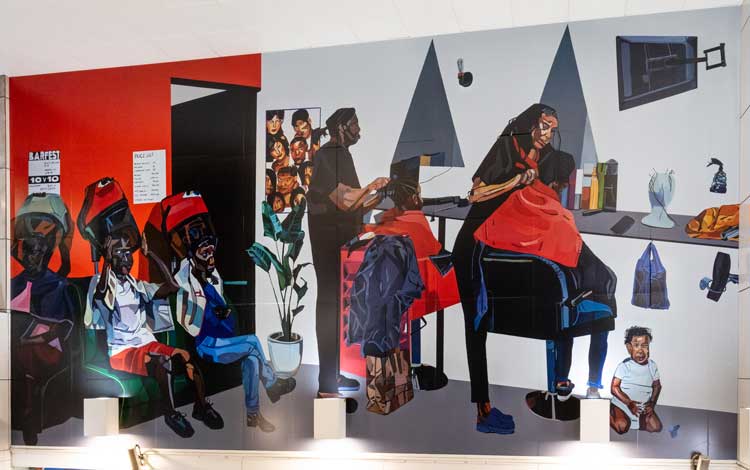 The source material for 5 More Minutes came from found photographs of salons across the globe, as aesthetically there isn’t much difference. I also used stills from YouTube videos and my memory. With regards to my memory, when I thought of objects that I needed to paint, I would Google them and use those images. I also used my shoes and legs for a lot of the figures. I would sit or stand in those positions and photograph myself from the angle that would be seen on the painting and painted them in that way. It really was a mixture.

AB: I am interested in how 5 More Minutes returns to the motif of women. The female figure initially appeared at large in your work; more recently, men have dominated your narratives. Was this a deliberate transition?

JL: To me you can’t really compare the two, they’re completely different. Gender isn’t something I really think about in my work – naturally, I do, but I wouldn’t say the paintings are about gender. For me, it’s about telling stories, and men in the salon wouldn’t have worked. But more than that, it wouldn’t have been accurate, as the salon serves women who rarely come in with their partners. The only male figures you tend to see in that environment are children. There would only be men if there was also a barber inside. The other initial painting I made of the family included both men and women, but naturally more women, who tend to be the ones upholding the black family.

The works you are referring to, of men, were about colonialism. While women were involved, I used men as a metaphor for mankind, which is something I’m still thinking about. I acknowledge it doesn’t tell the whole story, so there’s some thinking still to be done. 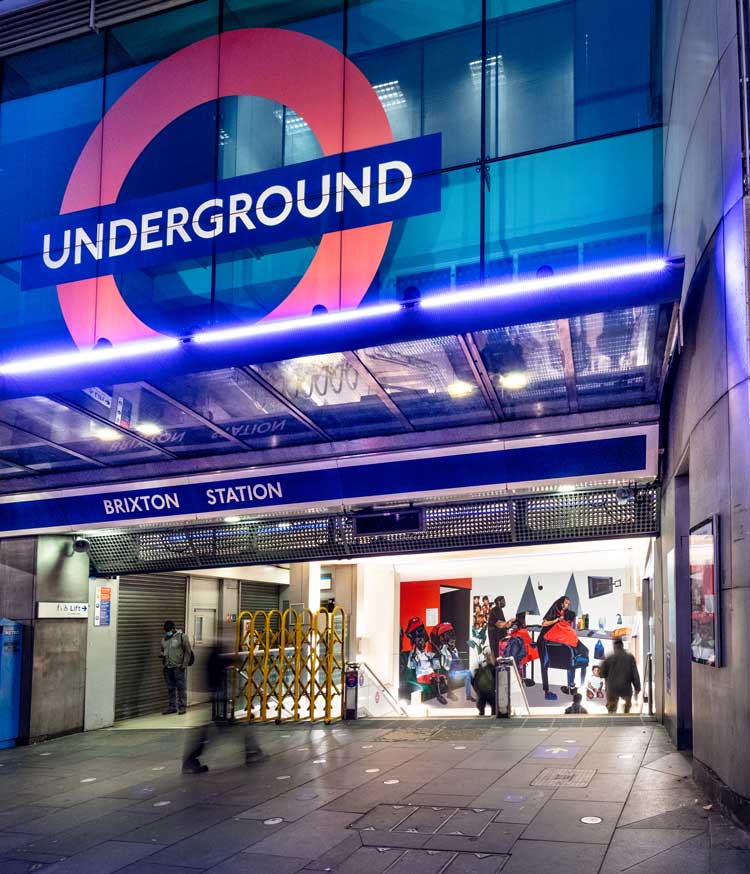 AB: You have previously said you cannot paint what you cannot see, underlining the importance of visual sources within your practice. The salon in 5 More Minutes is an amalgamation of salons and other interior spaces that you have visited throughout your life, so presumably relies to some extent on the imaginary – on memory – as well as, say, photographic sources. How is your painting process impacted when your references shift from the real (a photograph or object) to something that is envisaged through the act of remembering?

JL: What I mean by that is that I can use memory to think about how I want a space to look, remembering places and rooms that I’ve visited or spent time in. However, I can’t paint from my memory. So, if I’m thinking of a cream sofa, I’m going to find an image of a beige sofa and maybe fuse the image with the sofa from my memory. I really admire artists who can paint without source material, but it’s not something I can do.

I haven’t worked from life for years. It’s something I’m beginning to think about now and perhaps I’m getting more confident to ask friends and family. I’d always just thought when everyone leads such busy lives, I would be asking a lot to have someone sit for me. More than that, I much prefer working in solitude with my headphones on, so photographs have always allowed that.

Realistically, what I might do is invite people to sit to have their photograph taken. I think that would make my work more contemporary, without me having to engage in conversation for however long the painting takes.

AB: Your practice to date has focused on normalising the black figure and the black family – within the context of painting itself, as well as within the institutional settings where art is displayed – through the medium of portraiture. While earlier works were based on your family, taking inspiration from photo albums, for instance, your recent paintings have engaged with black subjects more widely. I’m thinking specifically of the works shown in The Elephant in the Room at the Breeder Gallery in 2020. Would you position 5 More Minutes as a work that resonates politically, particularly given the importance of Brixton within black British history?

JL: Oh gosh, that is a hard question. I think my answer to that is yes and no. The works from the Elephant in the Room read as political works individually, if that makes sense. So, The Real Thugs of Britain is very obviously a political painting, both by the title and the subject matter being police officers. Painted during the Black Lives Matter protests, it was speaking to my view of policing in Britain at the time. 5 More Minutes is a painting of the inside of a black hair salon. I don’t think that itself is a political act. However, when you think about the fact that I’ve known it was always going to be a public commission, I think that makes it a political choice.

There were no rules with the commission, I could have painted anything. I could have made a painting that included people of all races, but I didn’t. Those decisions were deliberate, and I guess political. Brixton has such a rich history and it’s hard to not think about Brixton in relation to the riots that happened in 1981, or the Windrush generation and gentrification.

For a long time, Brixton was a very black area and deemed to be dangerous. As a black woman, I wanted to paint something that reflected the history of Brixton without being alienating or too overtly political. I’m very aware that whatever I painted was going to be something that people saw on their way to work and after such a hard year with regards to the pandemic, I wanted to paint something positive that spoke to the community.

In short, 5 More Minutes as a standalone piece of work isn’t particularly “political” although I think it’s powerful in how large it is and the fact that black figures are very much taking up space. To get the full understanding, it really does need to be looked at as a commission for Art on the Underground and in Brixton station.

AB: Finally, how did the process of working on a mural compare to your usual experiences of working with oil on canvas? Was the public nature of the project, and the specificity of its location, at the forefront of your thinking?

JL: Yes and no. 5 More Minutes is a painting. It was made in my studio in Brixton to half the scale it is in the station. The painting is 236cm x 450cm and was made stretched and on canvas using oil paint. So, in some ways it was business as usual in the studio, using mediums that I normally work with.

Knowing it was a public commission to be situated in the station influenced the size, as it is the biggest piece I’ve made to date. I did that deliberately because I thought the quality of what eventually goes up in the station would be better if it’s only enlarged by 50%. But it was also easier for me to visualise it that way and make sure I was able to include everything I wanted to.

The only negative was that I completely underestimated just how exhausting it would be to paint something that large. I was excited, for sure, but physically it took a lot out of me. The location of the painting was definitely at the forefront. As much as I had always wanted to do a salon painting, I probably wouldn’t have done so without being invited to do this commission.

• 5 More Minutes is on view at Brixton Underground Station until October 2022.