In five new works at Sadie Coles HQ, the controversial American painter clothes the history of art in vulgarity 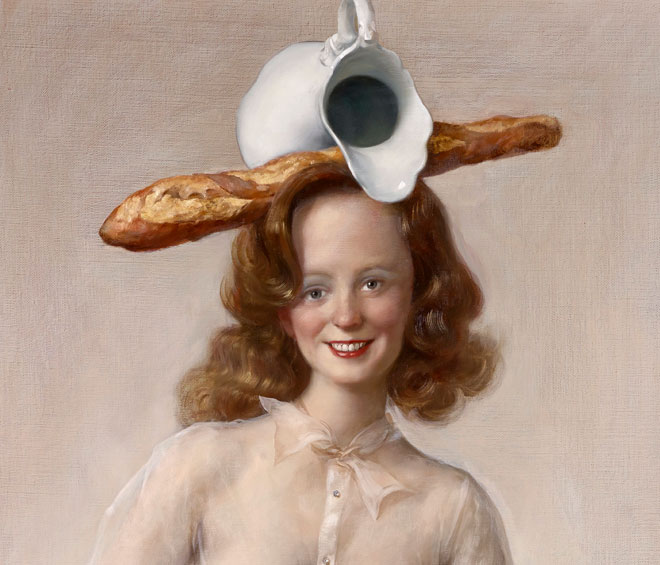 You would have to be a very specific sort of masochist to sit for John Currin (b1962). The New York-based artist – arguably America’s finest contemporary painter – doesn’t add the warts and all, so much as tease out the grotesquery lying beneath his subjects’ public facades, simultaneously cutting them back to their base animal nature and affirming the absurdity of the trinkets with which they surround themselves.

In Pistachio (2016), one of the five paintings present in a new exhibition at the Davies Street branch of Sadie Coles HQ, a mature couple stands in an embrace, the woman holding the man to her chest while cupping the side of his breast. Her face displays a spark of pleasure that is slightly undercut by the clipping of her lip. Eyes closed, the man resembles a flushed child being coddled by its mother. It is tacky, kitschy and sickly sweet; it is also painted with the delicacy and tonal intricacy of a Renaissance master.

The couple would be eerie enough without the peripherals that Currin appends to his subject. A cone of pill-green ice-cream, the pistachio of the title, has been upended on the man’s balding pate. A snail crawls up the woman’s back, its sliminess echoed in the sticky feeling of the painting itself. On her head balance a champagne flute and cooler, grapes and an orange. A stiletto heel digs into her forehead, while a pink stocking droops down to her breast, holding two fish and a set of playing cards in place. Are they in the process of being transformed into an Arcimboldo portrait?

Possibly not, but the spectre of that allegorical 16th-century painter looms; so does his mannerist contemporary Parmigianino, present in the woman’s freakishly elongated neck and fingers. The fruit and fish hark back to the Dutch still life, updated by the contemporary bourgeoisie decadence of the champagne, and the playing cards place the painting in a lineage running from the Northern Renaissance to Picasso. The silken stockings take us back to Boucher and Fragonard. The woman’s voluptuous chest burlesques Rubens, while the profile of her face echoes Manet’s pastel Portrait of Irma Brunner (1880). In her shiny sleeve there are luminous ripples of Michelangelo’s cangiante, while her partner’s suit sleeve bears the enigmatic greens and shadows of da Vinci’s sfumato shading. Currin has created nothing less than an art historical jigsaw, albeit one unified with his own mastery into something cohesive and distinct.

Pistachio feels like something of a culmination of Currin’s work to date. Born in Boulder, Colorado, he plumbed the depths of poor taste with his early artistic interests: the prog rock album covers of Roger Dean, and the muscle-bound barbarians and cleavage-baring princesses of fantasy artist Frank Frazetta. Something changed when, as a teenager, he was introduced to Claude Monet’s Woman with a Parasol (1875), a painting that Currin has called his “Mona Lisa”. From then on, fine art beckoned, but the garish imprint of past taste remained.

Before his formal training, Currin had a private tutor in Lev Meshberg (1933-2007), a painter of impressionist-inflected, earthy, pleasingly unlovely still lifes. The discovery of Willem de Kooning led to a period of abstract expressionist pastiche, which carried him through a bachelor of fine arts at Carnegie Mellon University and a master of fine arts at Yale, from which he graduated in 1986. Soon after, Currin read The Horse’s Mouth, a 1944 novel by the Irish writer Joyce Cary that follows the misadventures of a coarse and misanthropic, but dedicated painter. Inspired by the book’s meticulous descriptions of its protagonist’s practice, Currin was seduced back into the figurative fold.

His introduction to the New York art world came in 1989, with an exhibition at the not-for-profit art space White Columns. Here, he showed a series of portraits based on photographs from high-school yearbooks. Each painting depicted a teenage girl from the neck up, trapped in an expression of insipid, bland pleasantness. The discomfort these voyeuristic paintings provoked was magnified by Currin’s subsequent works, which drew on the tawdry glamour and sexuality of magazines such as Cosmopolitan and Playboy, folding pop ephemera into the time-arresting frames of the fine.

Selecting largely wealthy women as his subjects, he opened himself to accusations of misogyny, which were exacerbated as he turned to pornographic matter. In Honeymoon Nude (1998), part of the Tate collection, his young model’s empty narcissism renders her a passive object of male desire; later pieces, such as The Storm (2013), present sticky tableaux of swollen organs and bulging flesh, frozen in obscene poses. The art historian Norman Bryson, in his catalogue essay for the 2006 volume John Currin: New Paintings, wrestles with his countervailing admiration for the artist’s virtuosic abilities and his repulsion at the degradation of the female form. This uneasy dichotomy stands over Currin’s career, though numerous explanations have been given to absolve him.

Although nothing on display at Sadie Coles is as extreme as Currin’s most explicitly sexual works, they are open to accusations of contempt. Look at the cartoon-like grins of the Newspaper Couple (2016), or the slightly-off faces of the two young Happy House Painters (2016) and you will see a grotesque all the more sinister by virtue of its plausibility. Red Shoe (2016) is the closest to the pornographic Currin because of the subject’s exposed chest, but any notion of lust on the painter’s part is deflated by the woman’s comically distorted form and the baguette and jug resting on her head. One of the unifying features of these works is their vulgarity, but Currin’s superb brushwork – the incredibly layered texture of the woman’s blouse in Newspaper Couple, for instance – elevates vulgarity to an idiom usually reserved for ostensibly refined subjects.

It is through this simple act of transformation that Currin’s paintings become objects of wonder, and open themselves out to intriguing questions. What and who is it that deserves the privilege of portraiture? How should artistic style match itself to the world’s incongruities? Do skills developed from art history ennoble by association? Currin’s paintings, even at their most nauseating, are a commentary on the nature of painting itself. In an interview in the catalogue for an ongoing show at Florence’s Gallery Bardini, Currin says: “Part of what makes figurative painting fun is that it’s a total losing proposition”, in that by putting yourself alongside the masters you are setting yourself up for failure. This may be, but in these five densely layered portraits, Currin affirms the value of his own niche. 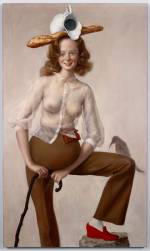 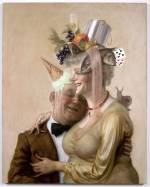 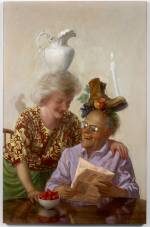 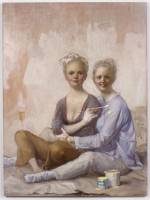 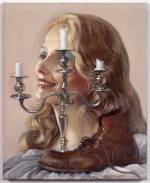