This celebratory exhibition of Byrne’s screenprints, along with a companion show of portraits of the artist, by his friend the photographer David Eustace, champions the camaraderie, craft and warmth of one of Scotland’s most admired and multi-talented artists 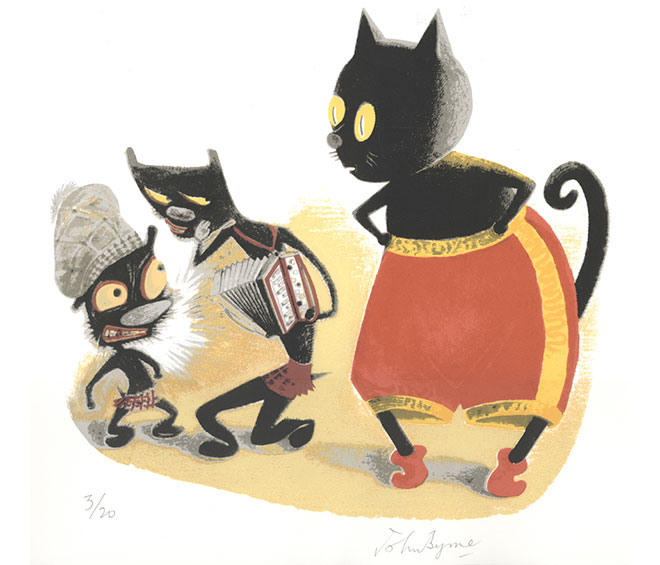 Since the early 1970s, the prominent Scottish playwright, writer and artist John Byrne has used the printmaking facilities at the Glasgow Print Studio, producing an impressive and diverse body of work. Showing work created there over the past 30 years, John Byrne at 80 celebrates the career of this well-respected artist, as well as his relationship with the Glasgow Print Studio and his camaraderie with fellow artists and friends. 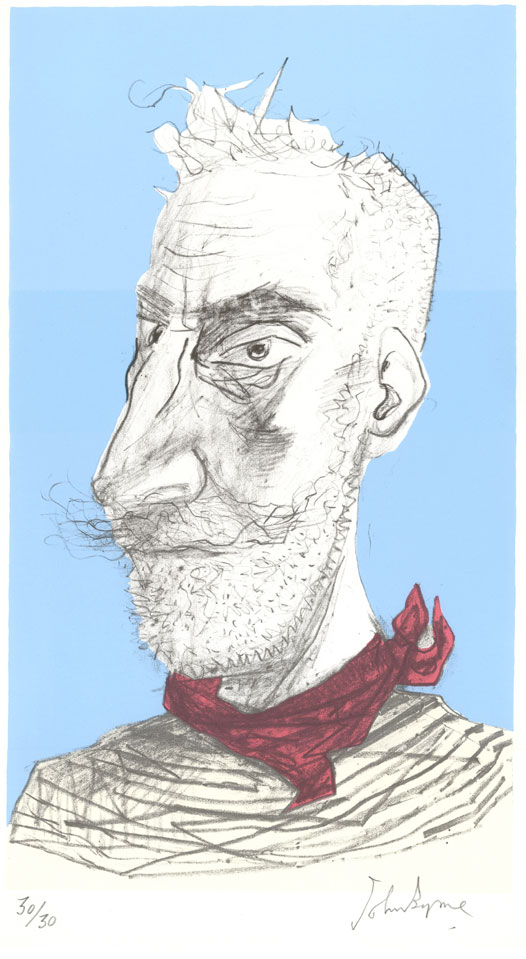 With his recognisable, flamboyant and humorous style, Byrne’s work here also includes a selection of new and exclusive hand-coloured screenprints. Sailor John, With Red Kerchief, Moustachio and Don’t Look Back, self-portraits all done this year, are striking and bold; they interrogate the artist and ageing—how his appearance has changed and continues to do so. Known for his sartorial style, Byrne seems to play with the idea of appearances shifting, a persona, perhaps, and the ways in which one’s character may shift and change not only over a lifetime, but over days and weeks. Indeed, that sense of mercurial character is part of one’s “self” not a contradiction to it; Byrne reveals and celebrates the myriad selves and states that he experiences in himself and others. There is also a sense, however, of precariousness: if we can change so quickly, can we also disappear with that same sense of magic, of morbid surprise? 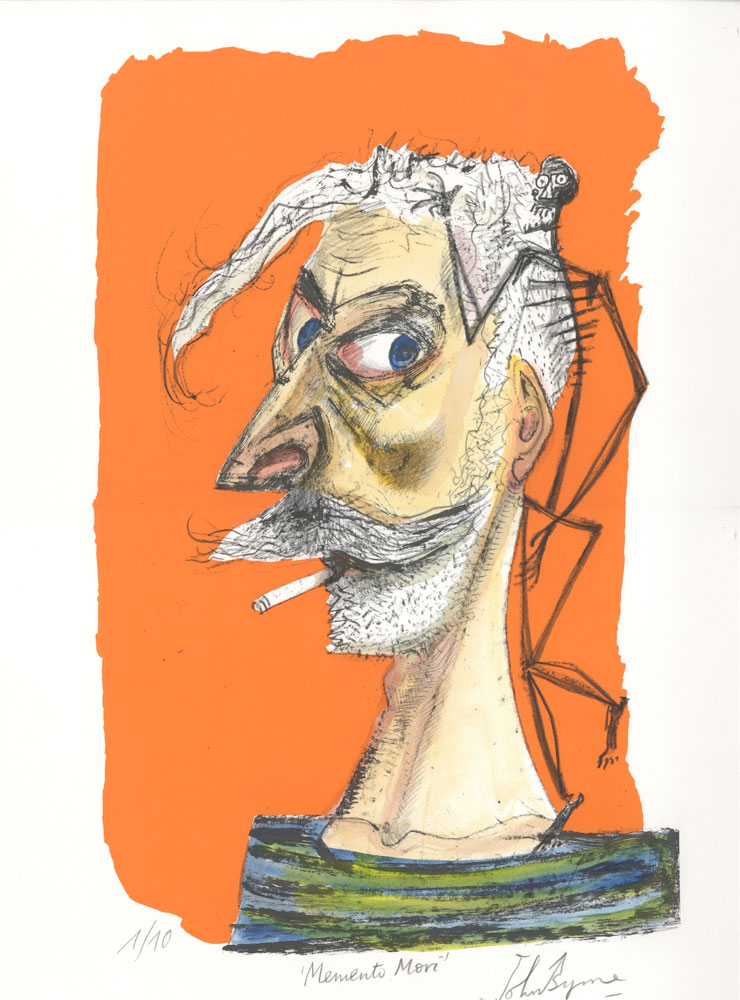 In Memento Mori (2020), the confrontation with mortality is especially clear: here the artist, against a vivid orange background, seems to be watching his own back, uncomfortable and on edge – haunted, even. Recalling the German expressionists (Otto Dix, in particular), Byrne’s self-portrait is a reflection on this state of morbid anxiety, particularly prescient now, and surely during its creation earlier this year, when the pandemic accentuated those thoughts in us all, but perhaps especially those of Byrne’s generation.

An earlier preoccupation with angels – in Ultramarine Angel (2012), for instance, and the etching L’Ange D’Or (2012) – adds a sense of lightness, spirituality and mythology to the set, softening the directness of some of the self-portraits and portraits of others, and recalling some of William Blake’s illustrations in their wistful, imaginative impressions. While Byrne is preoccupied with death to some degree, he is also entranced by the mystery of it; fear is an opportunity for creation, imagination and otherworldliness, rather than just nihilism or despair. 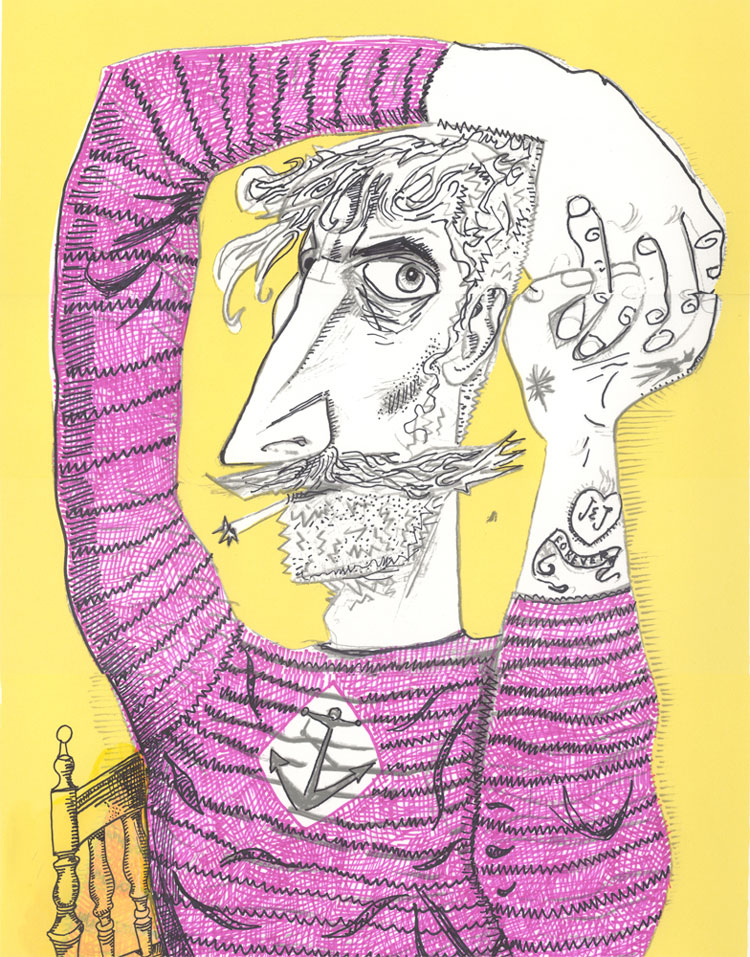 It is fascinating to see works from throughout Byrne’s career, but presented in such a succinct, focused manner, and that may be partly due to the nature of his relationship with the Glasgow Print Studio. Clearly collaborative and interactive, Byrne’s practice is therefore so well-understood that this retrospective has an understated calm to it, grounded in decades of work in the same premises and with, presumably, some of the same people throughout.

The evolution of style through the decades is also incredible, from theatrical, at times almost cubist, works of the 1990s, featuring clowns and characters, recalling early illustrations for the Ballets Russes, to subtle, stirring etchings using aquatint that possess a detached sort of melancholy. The variety and depth of Byrne’s practise is clear, even when his other work in theatre and writing is left out.

Alongside these works is a companion show, featuring portraits of Byrne by the Scottish photographer and director David Eustace, who has photographed Byrne since 1989. To see self-portraits of the artist alongside studies by his friend over the same period is fascinating, and also points to the camaraderie that is key to Byrne’s practice. Printmaking (as well as theatre) is inherently collaborative, given the site of its production – especially in Glasgow Print Studio, which is often busy and dynamic – and that awareness of, and warmth towards, others is clear in both bodies of work. Eustace has referred to the series as a “very personal portfolio” containing 12 of his favourite portraits of a “cherished and wonderful pal”. He reflects that the portraits, “form cherished memories and moments combined within a frame that offer an insight of a bigger picture”. 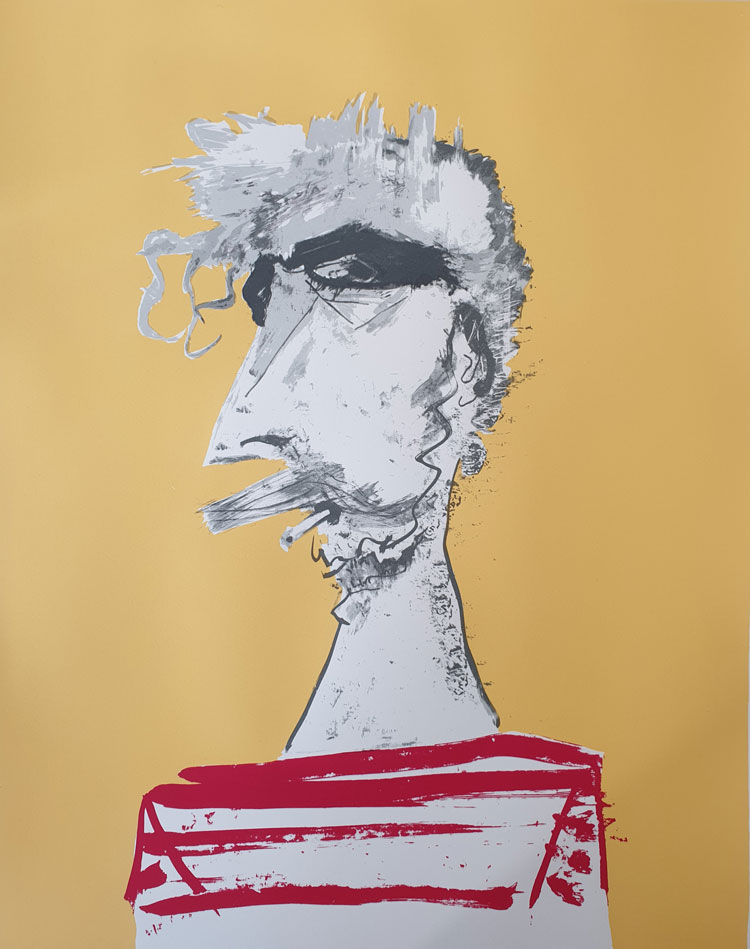 Sir Angus Grossart, former chairman of the board of trustees at both the National Galleries of Scotland and the National Museums of Scotland, has commented: “David observes over 30 years of John’s evolving appearance with acute sensitivity and wit. Each photograph is a chronicle of the time and the man, which has a universality and humanity to which we can all relate.”

This careful and compassionate awareness and interest in the passing of time, through the prism of Byrne, as subject and artist, is indeed moving. There is a real universality to these ideas, of course, but there is also a subtle and original specificity of the close-knit production of both Byrne’s work and Eustace’s photography. What is clear, amid fear of mortality and the particular circumstances of this exhibition, in 2020, is that human connection and compassion for one another is how we survive and move on. Byrne, a hero on the Scottish art scene for so long, but also a subversive, unconventional figure, emerges to remind us of these perennial truths. 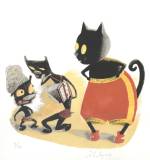