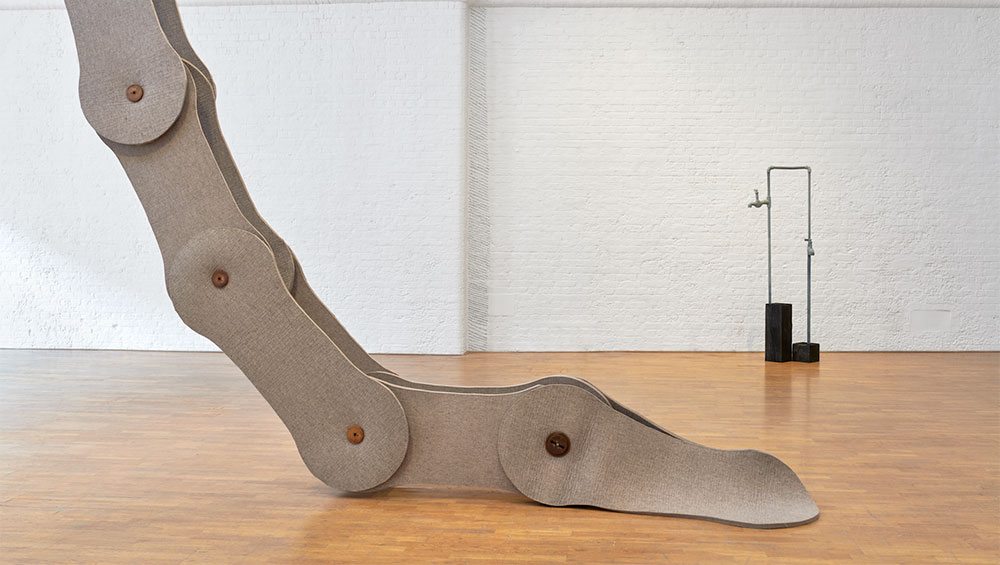 Shaky, grainy footage of a seemingly abandoned factory is projected on to a suspended sheet of white fabric. Closeups of whirring machines dissolve into a sequence of black-and-white abstractions before a glimpse of workers jolts us back to reality. Johanna Unzueta (b1974) shot these scenes at a struggling textiles factory in her native Chile. Images of sheep intercut the industrial views, referencing the natural resources on which the factory depends. Titled La Fabrica (The Factory) (2016-19), this meditative film, on show at Modern Art Oxford, encapsulates several of the New York-based artist’s themes: the notion of human labour, the relationship between industry and nature, and the history of manufacturing processes. All of which makes the gallery’s post-industrial building the perfect venue for Unzueta’s first UK solo exhibition. 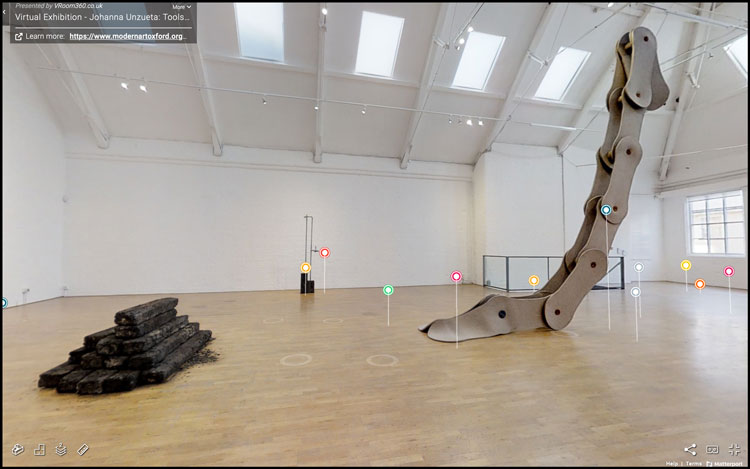 Opening the show is Related to Myself (2019-20) a huge, 9-metre-long chain rising from floor to ceiling. The sculpture suggests heavy industry, though it could equally pass for an enlarged bicycle chain. Moving nearer, you realise that it is crafted entirely from natural felt and wooden spools, painstakingly stitched together by hand. The blurring of industrial and domestic realms is repeated in her nearby plumbing-inspired sculptures, such as The Darkness of the Sea (2020). 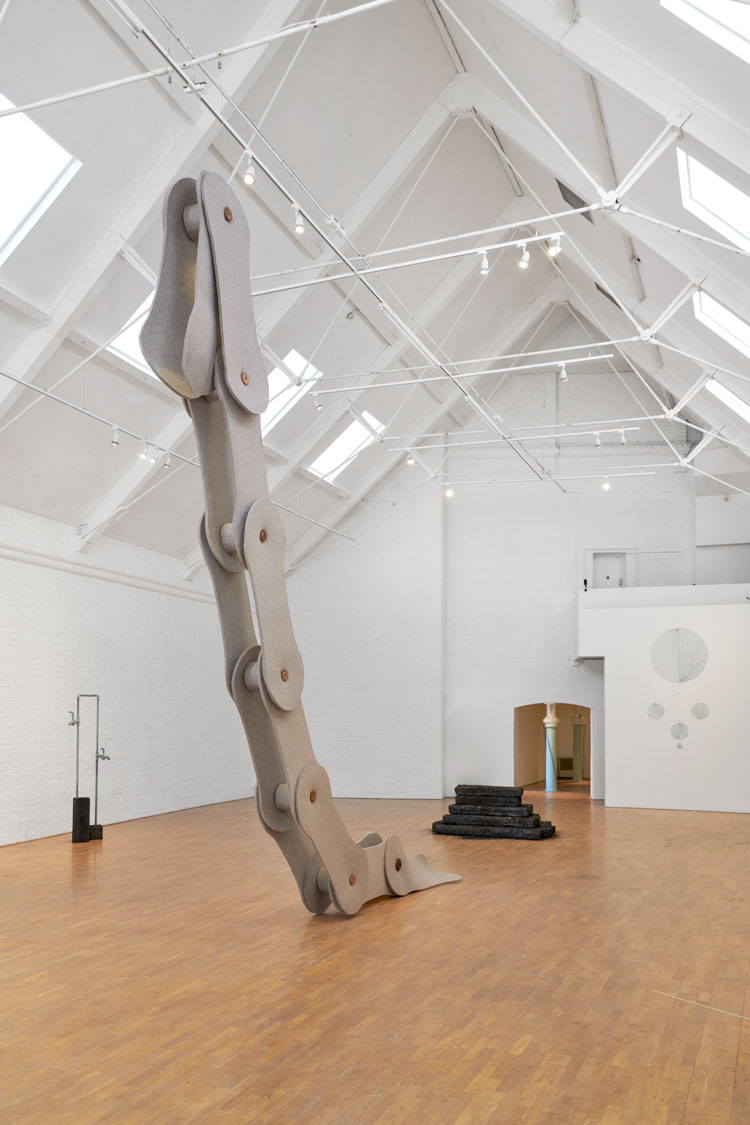 These are easily mistaken for configurations of old metal pipes and taps, yet closer inspection reveals the sheer craft involved in their making, with each piece of pipework faithfully reproduced in felt and sewn together with diligent precision. By highlighting everyday structures, systems and materials that go largely ignored or unnoticed, Unzueta asks us to acknowledge their beauty while contemplating the unseen labour that shapes and sustains our modern way of life. 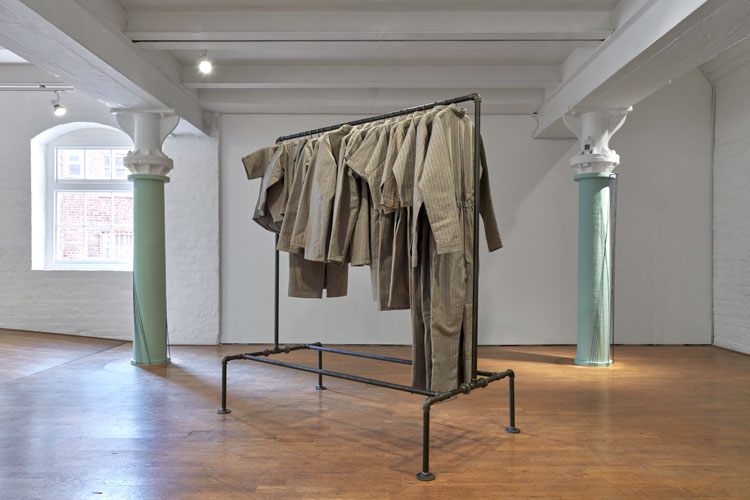 Similar themes are addressed by A Garment for the Day (2019-ongoing), which comprises a clothing rail hung with utilitarian shirts and boiler suits suggestive of factory workers’ uniforms. Reflecting Unzueta’s commitment to recycling and repurposing materials, each item is handmade from upcycled denim sourced from a textile factory in Guatemala. The sculpture is dedicated to the child labourers who spend exhausting hours in sweatshops, toiling to create the latest fast fashion for western consumers. While there is nothing trendy about Unzueta’s humble, striped uniforms, they nonetheless raise uncomfortable questions about the ethics of the global fashion industry, challenging viewers to consider the source of their clothing and those who created it. 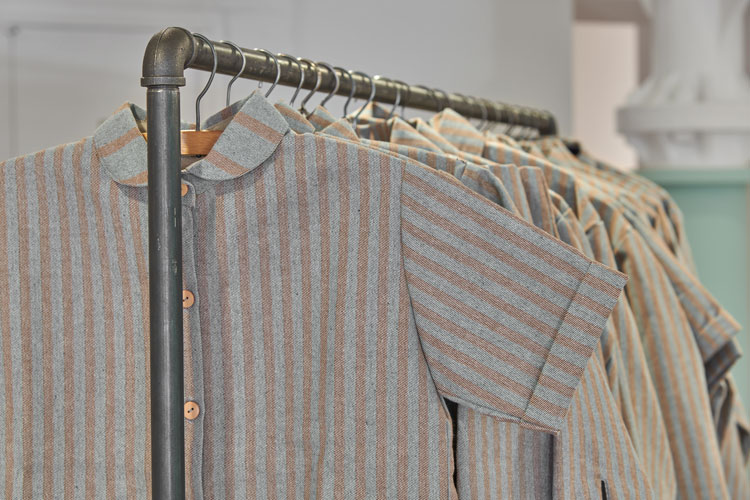 Unzueta’s sculptures and drawings flow from her engagement with the traditional crafts of Latin America. Before attending art school at Santiago’s Universidad Católica she was taught needlework skills by her mother and grandmother. Later, as an apprentice to an indigenous Mapuche woman in rural Chile, she learned to use vegetable dyes and techniques such as weaving and spinning. She also became expert in producing a rich-hued blue dye from the Guatemalan indigo plant, with which she colours her felt and the paper for her drawings. The history and origin of materials are also extremely important to her. For instance, the natural merino felt used for her sculptures is sourced from a family owned company founded in Germany more than 200 years ago. Her choice is as much a mark of respect to the manufacturers as it is a personal preference, acknowledging the time and skill required to produce such high-quality products. Similarly, the oil pastels she uses for her complex drawings are organic, containing highly concentrated pure mineral pigments. 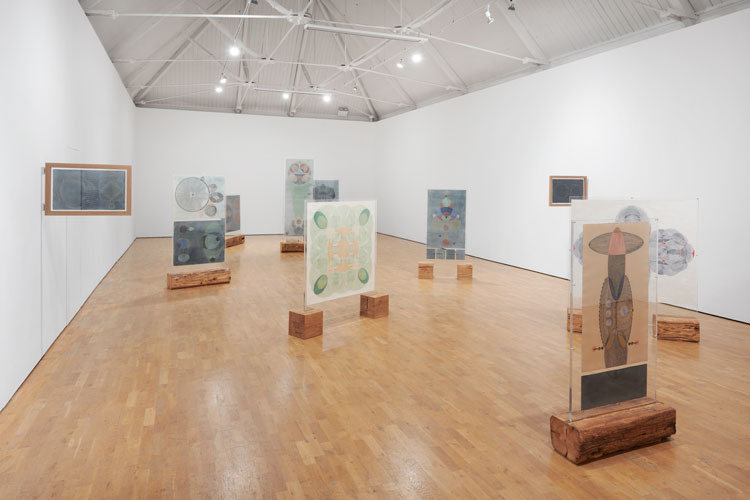 A bold selection of the freestanding drawings for which Unzueta is best known is installed in the final room. Large sheets of paper, many infused with indigo dye, are covered with patterns of circles, ovoids, ellipses and other geometrical forms that sit somewhere between diagrams and doodles. Each one is held between vertical sheets of thick Perspex supported by large timber bases that allows them to be seen in the round. This method of display owes much to the glass easel structures of the Italian-Brazilian modernist architect Lina Bo Bardi (1914-92), which were famously used to show paintings at the Museu de Arte de São Paulo in 1969. Unzueta’s structures similarly allow for closer engagement with her works while linking her drawing practice with her sculptures. 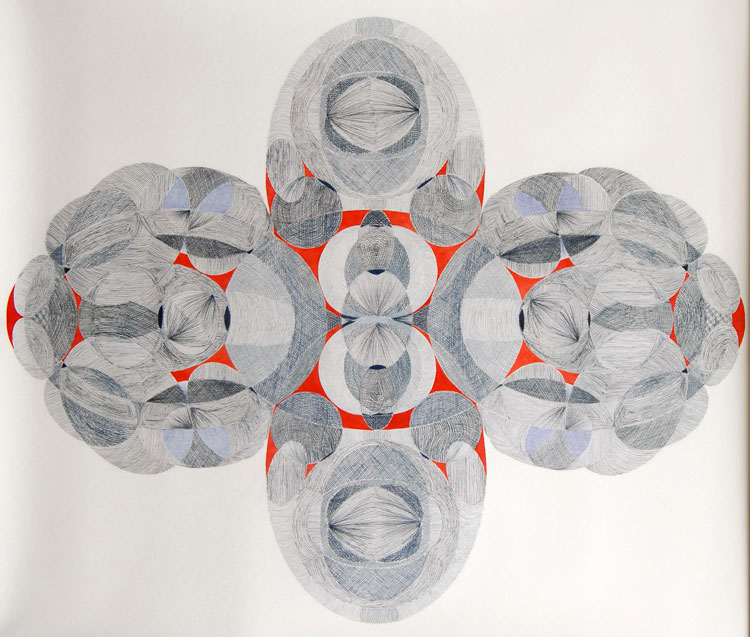 Made with watercolour, pastels and natural dyes, Unzueta’s drawings also reflect her enthusiasm for textiles and textile-based processes, since her distinctive language of forms is derived from embroidery hoops and paper templates. The designs, such as the overlapping green and orange circles in April 2015 NY, November 2015 Cuernavaca (2015) and the complex cluster of blue ovoids in December 2014, January, February, March 2015 NY (2014- 2015), are themselves suggestive of textile patterns. This is even more apparent in the large wall drawing Nocturnal (2020), with its thick black, red and orange oil pastel lines that suggest stitches and threads. The abstract design is joined by arrangements of real woollen strands attached to the gallery’s architecture, further emphasising the relationship between two and three dimensions.

In the basement, a selection of Unzueta’s films includes the mesmerising Hula Hoop (2015), in which a woman, seen from above, spins a hoop so fast that it becomes a blur of patterns and shapes, not unlike those in the drawings upstairs. Drawing, of course, is also a record of bodily motions in space and Unzueta’s sculptures, too, are redolent of movement, whether suggesting chains revolving in factories, water flowing through pipes or clothing animated by people (as indeed her uniforms were on the exhibition’s opening night when they were worn by gallery staff). It is yet another intriguing facet of the artist’s rich and multilayered work.

Unzueta’s effortless combination of formal and conceptual interests with social and environmental concerns is a delight, and while her art often looks to the past, this exhibition confirms that it is entirely of the moment. 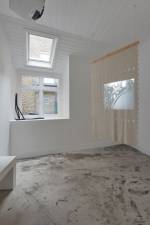 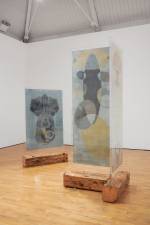