Through the work of six artists, including three new commissions, this exhibition looks at the thorny issue of copyright around art production

As you enter the Jerwood space, there is a white wooden chair with a steel frame. At first glance, it looks like one that might be found in a modern Scandinavian home. Yet on closer inspection, it becomes clear that this is a modified replica of the Danish architect and designer Arne Jacobsen’s 1952 Ant Chair. Entitled Copy Right (2006), the piece, which is by the Danish art collective Superflex, is on show as part of the exhibition Common Property, which aims to facilitate a conversation around copyright in relation to art production.

Common Property is the 22nd in a series of Jerwood Encounters exhibitions. Since 2008, the majority of the programme’s shows have been curated by artists, who have contributed insights into areas in which they have concerns. This year, Hannah Pierce, an artist and curator, has brought together six works by emerging and mid-career artists, to explore the issue of copyright in the digital age. The exhibition title is a reference to American artist Sol LeWitt, who said in 1973: “I believe that ideas once expressed, become the common property of all.”

This subject of copyright is a timely one. In October 2014, a change to UK legislation came into effect, allowing the parody of copyrighted works, on the premise that the parody meets two criteria: to evoke an existing work, while not rivalling the original, and to be considered humorous. Although the law is similar in Belgium, in January 2015, a Belgian court found the Antwerp-born artist Luc Tuymans guilty of plagiarism. His painting, A Belgian Politician (2011), in which he had used a photograph of the politician Jean-Marie Dedecker taken by Katrijn van Giel for a Belgian newspaper, was ruled too humourless to be a parody.

Pierce highlighted the effect of this ruling at the opening the Jerwood exhibition: “Common Property explores how copyright regulation is being used by artists as subject matter, or how it is affecting the way that they make and distribute work. In October 2014, the [UK] brought in this parody rule, and one of the criteria for this rule is that the work is humorous. It’s such a subjective thing. Is it enough for the artist to intend to be humorous? Do you need to receive it as a humorous or funny work for it to fit into that category? So that is something that has very much come through in all the work.”

This playful and provocative curatorial approach brings to life the otherwise dry subject of copyright. Canadian artist and writer Rob Myers exhibits Sharable Readymades, printable 3D models of famous “readymade” works from art history, including a balloon dog. Superflex’s quirky interpretation of Jacobsen’s Ant Chair was produced from an economical version of the chair, cut back to its original form. Rasmus Nielsen, a member of of Superflex, says: “First, we have an original and then it becomes a copy, and then it returns to being an original, so it is a fundamental relation between the original and the copy that is somehow being twisted.”

For her piece, one of three commissioned works in the exhibition, London-based painter Hannah Knox took as her starting point imagery associated with optical illusions from the 1990s phenomenon Magic Eye. She worked with software to generate an original design that she brought into her paintings, such as Reproduction (2015). Knox says: “I scanned in imagery and the eye motif, and then put it into this autostereogram program, and within it I have hidden an urn. I also have physical urns outside. The urns were made in Crete, where my grandmother originated.”

Performance artist Owen G Parry explores how communities of fans deal with copyright by creating new stories out of existing material. In his commission, Larry!Monument, he looks at the fictional romance between One Direction members Harry Styles and Louis Tomlinson. The multiple characters in his video open up this story, in the form of a “shipping ritual”. For Parry, the idea of “shipping” captures two ideas in relation to copying: appropriation and expansion, which relates to Derrida’s idea of “archontic” literature. Parry says: “What I think is interesting about the exhibition is that it is not just about appropriation. It is about the fact that pieces are creating new relationships beyond what exists in the original works.”

In the third commissioned piece, Transformative Use (2015), which is derived from a Disney character, artist and curator Antonio Roberts – like Knox in her painting Reproduction – displays an interest in the terminology that surrounds copyright. In addition, he exhibits a new series of brilliantly coloured video works that derive their titles from songs that have been the subject of court cases involving copyright infringement.

Wales-based artist Edwin Burdis places sound at the heart of his practice, having grown up making music with a sampler, such as hip-hop and dance. He suggests how the approach of DJs, who sample, re-mix and layer sounds to create new material, might apply to painting, in his provocative series Polytunnel-Bangerz (2015).

This exhibition connects with the teaching of many art schools, where students are encouraged to imbue their copies of well-known pieces with original perspectives. This approach may be seen in the work of art-school trained Superflex, which presents its own take on a modernist chair, and Royal College of Art graduate Knox, who seeks to add an original layer to a 90s phenomenon. Yet self-taught artist Burdis, who is currently developing an opera for Aldeburgh, takes a different approach, maintaining that it is good to work with an established body of material, rather than making new things. Burdis questions whether original ideas actually exist, and in doing so affirms the appeal of this exhibition to students. “It is great to be in this show,” he says. “Copying has been going on for ever, hasn’t it? Maybe the younger generations are just more aware of it now, because it is so easy to access material.” 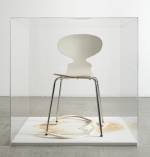 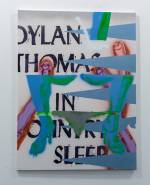 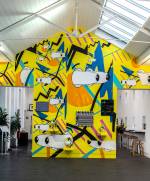