American artist Jennifer Rubell explores motherhood through a series of participatory works. Looking to break the established rules of the gallery, she encourages viewers to hold a baby, eat eggs – and even take their clothes off in the gallery

In one of the most anticipated shows of the season, artist Jennifer Rubell, known for her playfully performative work – and her art collector parents – exhibits a series of works that explore her personal experience of motherhood.

I first encountered the Rubell experience when climbing inside a giant sculpture of Rubell herself, Portrait of the Artist (2013), which was more than seven metres long and occupied the whole of the Stephen Friedman booth at Frieze London in 2013. Her style of participatory artwork is to literally include the viewer within the work. In this latest show, however, instead of us climbing into her stomach, the work climbs into ours.

Participation begins when an attendant passes you the first artwork to hold. Titled Us (2015), it is a handblown glass sculpture of a baby, the glass baby that everyone has been talking about. As the attendant hands it to me, I feel a tension when the object is halfway between us, at its most vulnerable. The tension is relieved as soon as the baby is in my arms, held close to my body, and I begin to relax again.

The sculpture is heavy enough to require both hands, and arms, to hold it. And although the glass is fairly thick, it is fragile enough to require concentration and care not to drop it. With your arms out of use and with the surface area of the object firmly against you, you have no choice but to engage fully with the work.

The experience of weight is rare to an art gallery experience. Rarely is an object entrusted to a stranger and, through breaking that art-gallery taboo, Rubell creates an intimate relationship between herself and the viewer, creating a sense of trust that works; no one has dropped the baby yet, and I certainly don't want to do so either. First, it’s a baby and perhaps I have some sort of parental instinct, but, mainly, it’s an interesting object; I’m interested in it aesthetically – it is smooth, yet dimpled, catching the light and distorting it inside its hollow form – and I'm interested in its conceptual meaning. In the same way that children are given dolls to cultivate feelings of responsibility and care, Rubell gives the art world an object, to test the trust of their relationship.

The works in the exhibition were created during the three years following the birth of Rubell’s second child. It feels as if, throughout the exhibition, she is attempting to describe the bond a mother feels, perhaps even the burden. In the second room, Rubell has created a smaller sub-room. It's a small, unlit space with a single bed and, in the corner on the floor in the shadows, a sculpture of a bronze baby in a crib. This unassuming and contained installation is titled Forever (2015). While I lay on the bed with my weight supported and my eyes closed, I can still feel the weight of that glass baby, somehow still heavy and present.

Outside this inner chamber, two parallel shelves run around the outer walls of the gallery. The upper shelf holds sets of salt and pepper shakers and on the lower shelf sits a line of pale, hard-boiled eggs. The salt and pepper shakers, from Rubell’s personal collection, exist in comical pairs; two kissing bulldogs, a princess and a frog, a bride and groom and a mouse and cheese, among others.

Rubell expects the viewer to crack, salt, pepper and eat an egg, right there in the gallery; this time, her artwork enters your body, you don’t enter hers. The egg is a direct reference to motherhood specifically and almost scientifically; a bundle of cells and chromosomes waiting to be fertilised, yet the salt and pepper shakers, that remind me of the ornaments on my grandmothers mantelpiece, speak of something that feels very non-scientific: homeliness, teatime, love. She shows the two very different bonds that are present; those that are forged and those that we create.

In the opposite gallery, there are four monumental paintings showing Rubell naked on a horse and headless. We see the naked body that has inspired this whole exhibition, yet the exhibition is not a portrait, but, rather, it seems to be about sharing a personal experience in the hope of making it universal.

These graceful gestural works have been painted by the fictional painter “Brad Jones”, a collaboration between Rubell and American painter Brandi Twilley. Rubell has been posing nude for Twilley three times a week for the past two and a half years, with Twilley playing the role of the painter in their collaboration.

We see their process in action in the next video work, which lies behind a lockable door, another internal space that Rubell has created in the gallery. Posing (2015) is a static shot video running for more than three hours showing Rubell naked on a horse in a studio, being painted by Twilley.

The private cubicle is necessary because Rubell hopes that viewers will take off their clothes to watch the film, enabling them to mirror her state and become part of the work, moving it beyond the realms of video into installation. A small notice states: “You will not be filmed.” Rubell placed her trust in us, now we must place ours in her.

Inside the cubicle, the only sounds are the occasional low voices of Rubell and the horse attendant, and the louder clopping of the horse’s hooves on the concrete floor as he readjusts his position, pulling against his bit. The group appear to be in a garage, lit by an unseen artificial light from the side, and behind Rubell and her steed, a crack of natural light seeps in from the bottom of the pull-down garage door, blocked occasionally as a car passes by outside.

Rubell places her hand on the horse's back, looks to the side then regains composure, as he yawns and bites down on his bit uncomfortably, but peacefully unfazed.

Slightly blurred in the foreground, in a loose blue vest and shorts, Twilley moves back and forth from the canvas to her selection of paints on a table. The rhythm of her movement breaks the view of Rubell, and with the passing cars and the clopping hooves, the composition feels quite musical. It’s unexpectedly powerful. Rubell exposes her process, the secrets behind her art, in another candid exchange with the viewer.

While being intensely personal to Rubell, her work has a universal appeal through the interrogation of broad subjects from the body to parenthood. Rubell coaxes the viewer to participate with her work on a very individual level. She cultivates trust through the creation of simple exchanges and through controlling the space in the gallery, which makes the experience of the exhibition quite solitary, yet all the more revealing. 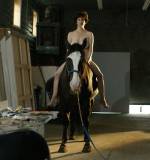