This quasi-retrospective exhibition of the work of Jannis Kounellis at Modern Art Oxford is a remarkable opportunity to reassess the continuing significance of this outstanding artist. Kounellis was born in 1936 and has been described by some as the 'veteran' of the Arte Povera, or 'poor art' movement. Despite the fact that he was the key motivator of the movement, which emanated chiefly from Rome and Turin in 1970, it must be recognised that he is still working in his prime today, as this new exhibition at Modern Art Oxford demonstrates.

As a Greek (he was born in Piraeus in 1936), he remains questioning about the numerous assumptions through which one must wade to get at the essential truths behind modern contemporary art. There is a gravitas and a profound monumentality about a work such as 'Untitled' (2004); the array of regularly disposed, criss-crossed steel elements have the effect of taking one back to the Acropolis, no less. It could certainly never have been Roman, for all the decades he has lived in the city. Kounellis's art is about materiality and its location and dispersal with a modicum of grace. Invariably, his work imputes a discrete sense of history, even in these 100 girders, touching ground on numerous Turkish carpets. There is a hint here of Gallipoli, but if anything is to remind us why we should welcome Turkey wholeheartedly into the European Union, it is this display by Kounellis the Greek, aware of how, eventually, Turkey's erstwhile arrival into the EU may dismiss some of the proliferating blandness of this increasingly smug community of nations. With such works, Kounellis both projects history forward and at the same time rediscovers our humanitarian roots.

I still have the masterly catalogue from 1981, composed by Rudi Fuchs. In certain passages, Fuchs emphasises the nature of Kounellis's engagement with Rome, plotting its atmospheric variations. Fuchs also describes a journey he and Kounellis had made together in Russia into the country outside Moscow, 'We enter Russia, the old country. The first low wooden houses appear along the narrowing road, green fields, flowers and birch trees: the land of the poets.' Apart from the accompanying memories of icons and of the famous monasteries of Andrei Rublev's time in the area of Sagorsk, Fuchs emphasises such memories that also entranced the Greek. Kounellis found there in Sagorsk, 'The dream, the enchantment, the mystery, the melancholy, the past, the purity, the splendour, the future, the spiritual, the order, the architecture. It was all there, north of Moscow.'

Fuchs uses Sagorsk, appropriately, as a model. He says, 'I think the works of Kounellis operate, or articulate themselves in an area/aura of similar mystery. One of the problems of Kounellis's work, taken all together, is that like the priest/monk Andrei Rublev, he sees fire as a necessary cleansing element in life.' Sadly, one can't do that in galleries any more. The flaming bunsen burners that Kounellis displayed in the past are no longer permitted, even at Modern Art Oxford. So too have gone the representatives of life, in the form of parrots, fish (although goldfish are still permitted) and even myriad horses. Not infrequently, Kounellis still enacts metaphorical 'shrugs', such as the electric train model that repeatedly encircles an existing gallery pillar, as if to download some of his own accumulated gravitas. The horses, exhibited in Rome in 1969, were something altogether more extensive. The 11 creatures were quite elegantly, but gently juxtaposed with replica reliefs of the horses carved on the Parthenon.

In the heyday and subsequent aftermath of Arte Povera, various memorable tribute exhibitions have helped to substantiate the importance of Kounellis. The exhibition organised in 1982 at the Stedelijk Museum, Amsterdam, under the aegis of Edy de Wilde, entitled '60s - 80s Attitudes, Concepts, Images' was a case in point. It followed the Kounellis travelling exhibition of 1981, curated by Rudi Fuchs. For the Stedelijk show, it has to be said that although Fuchs had already unlocked the mysteries of Kounellis, the most dramatic and powerful works could not be included. Now, 22 years later, Modern Art Oxford has provided an excellent resumé of our time, capturing all the materiality and poetics of Kounellis's work. 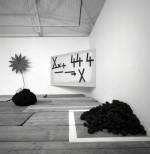