Celebrating the first stages of restoration of the Ghent Altarpiece, as well as the incredible academic knowledge, innovation and artistic precision of the first learned painter in northern Europe, this once-in-a-lifetime exhibition brings together half of Jan van Eyck’s known works 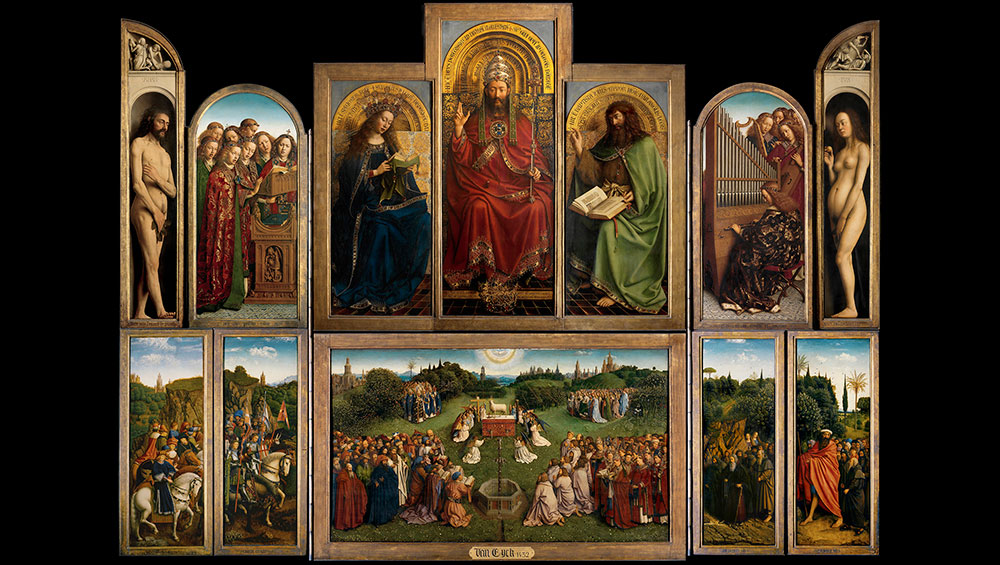 The Ghent Altarpiece (completed in 1432 and inaugurated in 1435) is as known for its eventful history – as the most frequently stolen work of art, with one panel’s whereabouts remaining unknown since 1934 – as it is for its splendour and precise craftmanship. More recently, it has also become a social media sensation, with the Mystic Lamb (the surprisingly tiny central “figure”, representing Christ as the Lamb of God) even being given its own Instagram account, as the ongoing process of restoration has revealed a completely different – and far more exquisite – painting underneath centuries’ of overpainting and oxidised varnish. 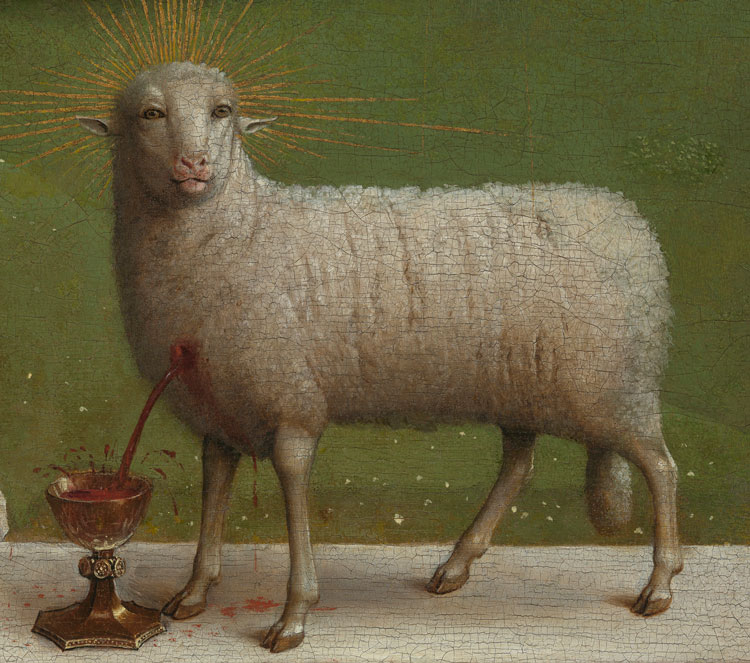 Even after restoration, it still remains a mystery which Van Eyck sibling painted what. The work is thought to have been begun by Jan’s elder brother, Hubert, (c1360/70-1426) about whom little is known, and by whom no further works are thought to exist, and completed by Jan (c1390-1441) after Hubert’s death. There is some suggestion that their two other siblings may also have lent a hand, although only Hubert and Jan are credited in the Latin quatrain on the polyptych’s frame, which calls Hubert the greatest painter there was, and Jan “second in art”. The consensus, however, is that the majority of the work was undertaken by Jan. To celebrate the near completion of this restoration project – which has taken longer than planned due to its unexpected complexity – and the opening, in October, of a new visitors’ centre in St Bavo’s Cathedral, for where the altarpiece was commissioned, and to where it will return, the former capital of Flanders is celebrating a year’s worth of Van Eyck-themed festivities, exhibitions and events, under the (somewhat cringeworthy) header of #OMGVanEyckWasHere. At the heart of this is the exhibition, Van Eyck: An Optical Revolution, at the Museum of Fine Arts Ghent (MSK), which, for the past eight years, has housed a studio for the restoration work, visible at all times to the public. 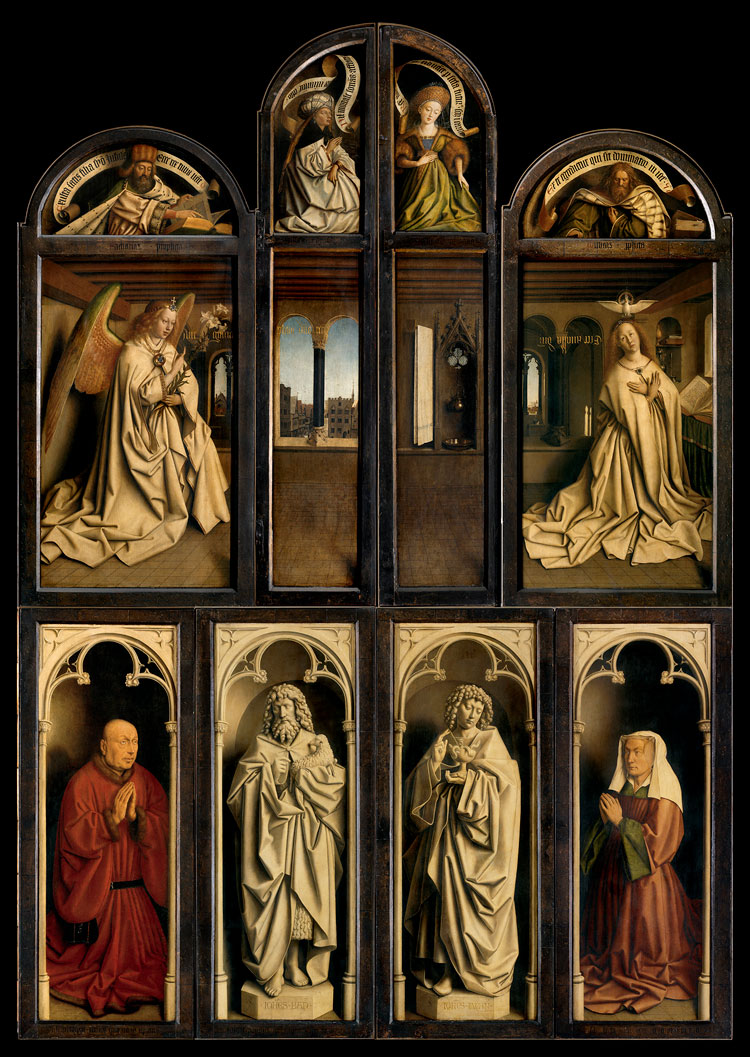 Filling 13 galleries, this is the largest Van Eyck exhibition in history, bringing together 10 of his 20 known works, alongside copies, works by the artist’s contemporaries and contextualising items such as maps and manuscripts, and artefacts depicted on the altarpiece, including tiles, a candlestick and an apothecary jar. Six of the altarpiece panels form the backbone of the exhibition – the four outer panels, now fully restored, and two inner panels, depicting Adam and Eve – and lend themselves to the thematic displays. The key curatorial goal of the exhibition is “to unravel the myths surrounding the artist and place his revolutionary technique, his oeuvre and his influence in a new perspective”. 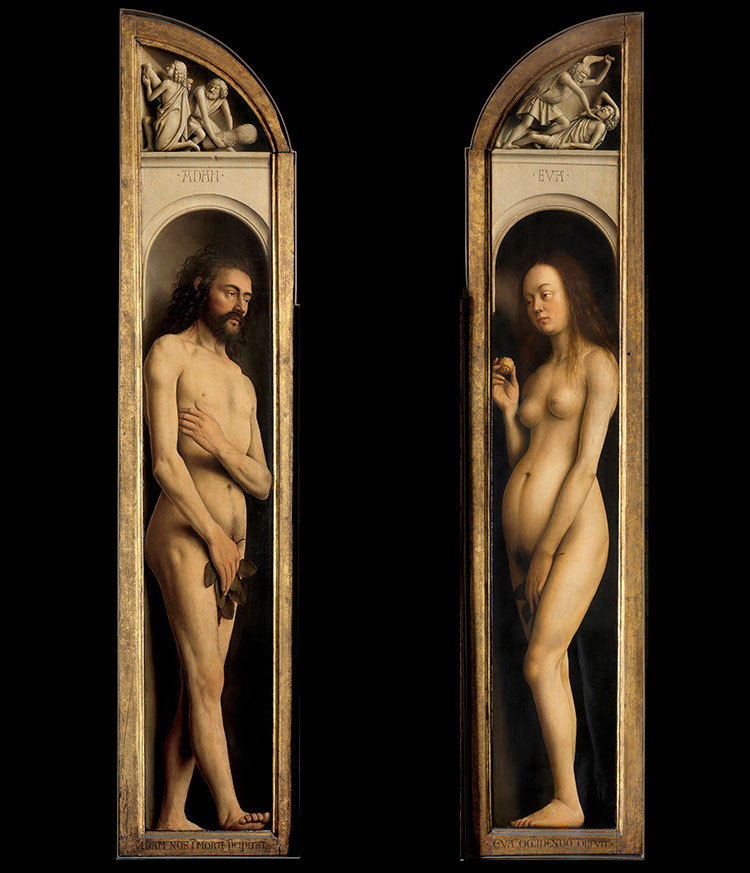 After a number of introductory rooms, the first panels on display are those depicting Adam and Eve, which have yet to be restored, and thus still sit under a dark glaze. Eve is shown with a large, swollen belly – the fashion of the time – and a large forehead (women frequently shaved back their hairlines to meet this trend). She is holding a fruit in her hand, but it is not an apple. Instead, it is an etrog – a small citrus fruit – which is apparently a closer translation of what the Bible says she and Adam ate, when tempted by the serpent, and thus the first of many demonstrations of Van Eyck’s impressive academic knowledge. In his painting of Adam, Adam appears to be stepping out of the frame, and the detail is intricate, with even the hairs and veins on his legs standing out as if in 3D. It is this precision and hand-to-eye coordination that has helped confirm the attribution of works to Van Eyck himself, and not just his studio.

For example, The Three Marys at the Tomb (c1440), shown in the same room, has previously been labelled as a Van Eyck, but, by comparison, owing to the lack of exactitude, is now thought more likely to be by his studio. Nevertheless, as is further typical of the master, it mixes elements of Ghent and Bruges (through the depiction of typical Flemish houses) and the Holy Land (including the Dome at the Rock and the Holy Sepulchre), creating a realistic illusion.

This notion of “realistic illusion” is furthered by Van Eyck’s use of perspective, which does not mathematically compute, but is based, instead, on intuition, comprising several sightlines, and depicting objects in the foreground as clear, with those further away becoming blurred. Works are included, for comparison, by Fra Angelico, (for example, the contemporaneous Scenes from the Life of Saint Nicholas of Bari, c1437), who used linear perspective. These works also allow for comparison between Van Eyck’s use of oil paint and the Italian persistence with tempera, which created a very different surface texture and brighter, lighter colours. Giorgio Vasari credited Van Eyck with having “invented” oil painting. This is not wholly true, but he certainly improved the technique and made it more widely usable by the addition of thickatives. On top, he worked with layers of transparent, coloured glazes, capturing light in the work and achieving an innovative variety of colour nuances and saturation.

Court painter to Philip the Good, an illustrious patron of the arts, Van Eyck was the first learned painter in northern Europe, educated in one of the guilds. He was also the first northern artist to sign his works – not out of arrogance, but out of humbleness, often adding his motto “als ich can”, meaning “as best as I can”. Philip, who became a close friend, also gave the artist a diplomatic role as an envoy, through which he was able to travel and expand his academic knowledge. In fact, the Duke is quoted as saying: “We would never find a man equal to his liking nor so outstanding in his art and science” (13 March 1435). 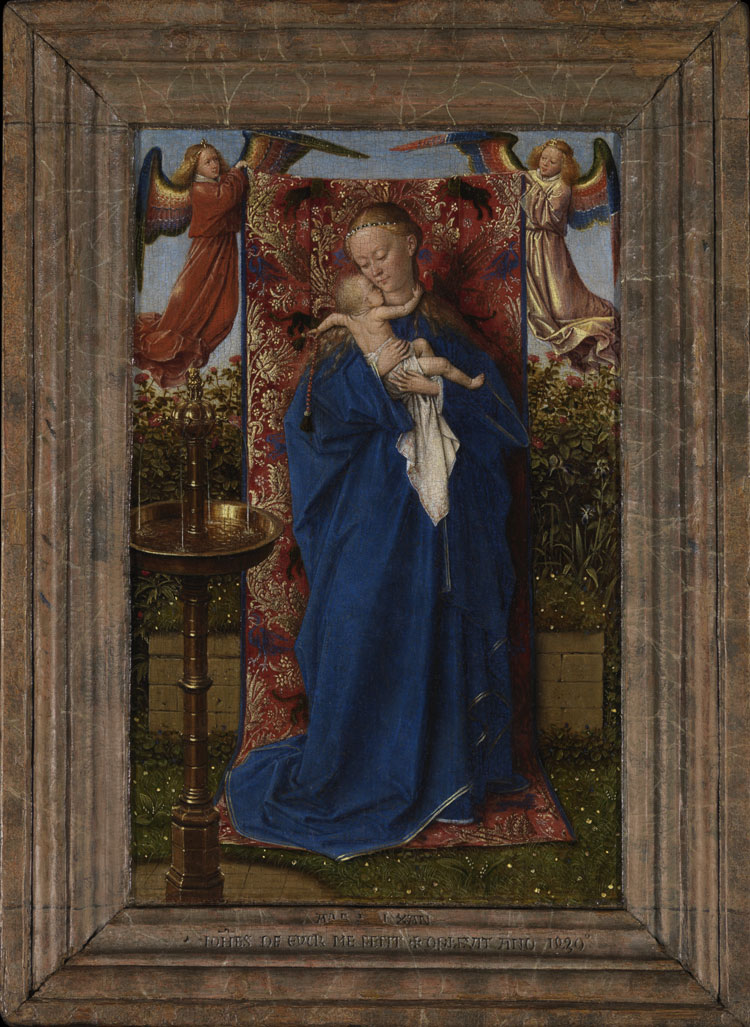 One area of academic expertise with which Van Eyck was certainly au fait was the theory of optics. The idea of “spiritual seeing” had been around since the writings of St Augustine in the sixth century and, even before that, the Arabs had their own theory of optics, relating to seeing reflections in curved mirrors and seeing light refracted in water and glass. Van Eyck integrated this metaphysical philosophy into his work, believing that painting reality was the way to seeing and understanding God. His obsession with reflections and refractions, which he demonstrated through the inclusion of jewels and glass and drops of water, is demonstrated clearly in the tiny yet peerless image Madonna at the Fountain (1439), made for a private chapel. A near-identical work from a year later again lacks much of the intricate detail of the original and is thus, once more, thought to be a product of his studio. 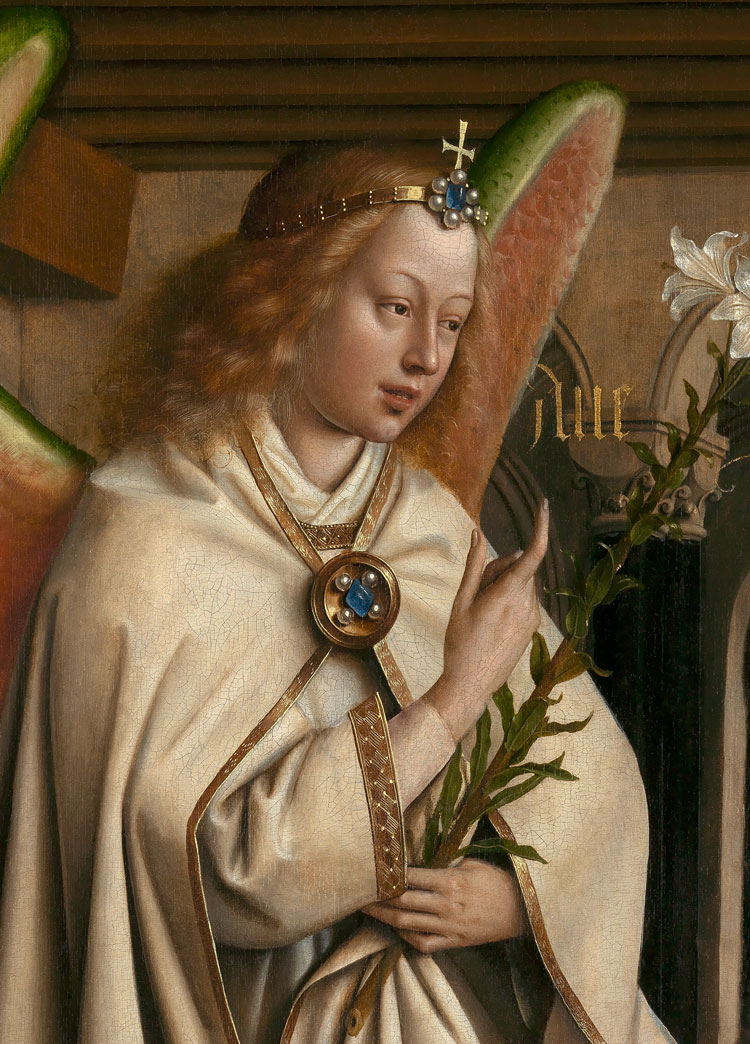 The Annunciation panels from the altarpiece are further examples of Van Eyck’s expertise. Restoration has revealed the way in which he worked with the natural light sources in the cathedral’s Vijd Chapel, integrating these rays and shadows into the painting. It has also reinstated incredible contrasts, creating a real sense of material flow in the Virgin’s and Angel’s robes, and, again, clever optics in the Virgin’s pearls and bejewelled brooch. Writing denoting Mary’s answer to the Angel’s message has been painted upside down, so as to be legible to God in Heaven. A smaller painting of The Annunciation (c1430-35), on loan from Washington and displayed on the wall opposite, again shows the words being spoken in Latin – another demonstration of Van Eyck’s learning. 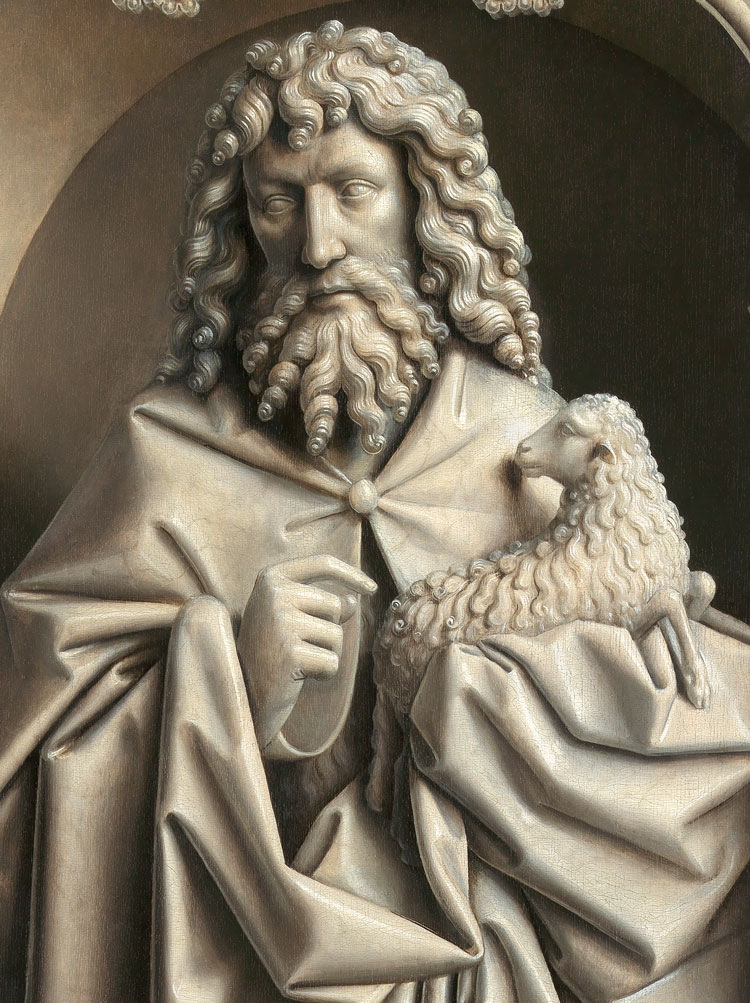 His paintings of sculpture are practically better than any 3D work a sculptor might hope to create, and really push this play with shadow and light. The two exterior panels from the altarpiece, depicting John the Baptist and John the Evangelist, painted in grisaille, were so yellowed from varnish that it had long been assumed they depicted sandstone sculptures. The cleaning and restoration process, however, has revealed them to be white, and thus depicting marble. These are displayed near to a series of exquisite pen-and-ink drawings of the 12 apostles, nevertheless somewhat overshadowed by the inclusion of a simply stunning tempera and gold-leaf panel of St Paul by Van Eyck’s Italian contemporary Masaccio. One saintly depiction which cannot be bettered, however, is his drawing of St Barbara (1437), which shows the saint almost as large as the church tower in which she was, according to legend, imprisoned – because, of course, she metaphorically is the Church. Once again, this is an example of the artist’s intuitive use of perspective. 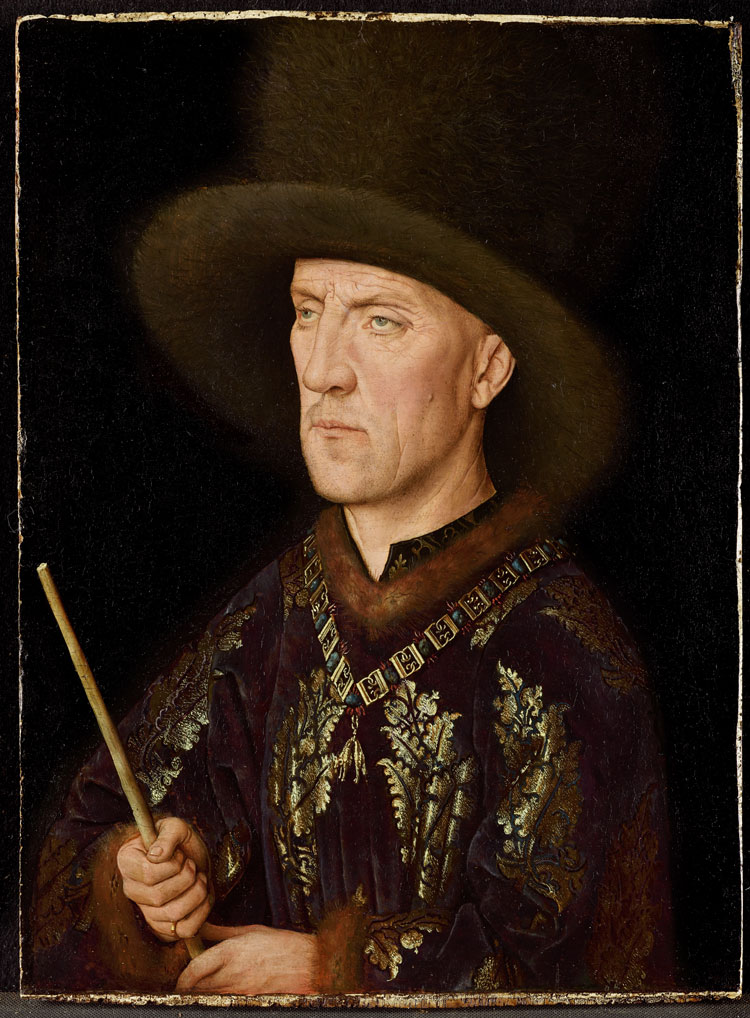 The final two rooms of the exhibition contain portraits – secular and divine. The former includes the panels depicting the polyptych’s two patrons – the Ghent dignitary Joos Vijd and his wife Elisabeth Borluut – alongside five further portraits, including one of the artist’s wife (1439); Portrait of a Man (Léal Souvenir) (1432), on loan from London’s National Gallery, and, along with the altarpiece, one of the earliest-dated Van Eycks known; and Portrait of Baudouin de Lannoy (c1435) from the Gemäldegalerie in Berlin. The latter two works were also restored at their home venues in special preparation for this exhibition. Three-quarter profile portraiture was not yet common in the 15th century, and so Van Eyck, again, was ahead of his time. He also did not adhere to classical idealisation, placing emphasis, as before, on the precise depiction of features, both good and bad. As his biographer Bartolomeo Fazio wrote, Van Eyck’s portraits were so realistic that all that was missing was the sitters’ voices. 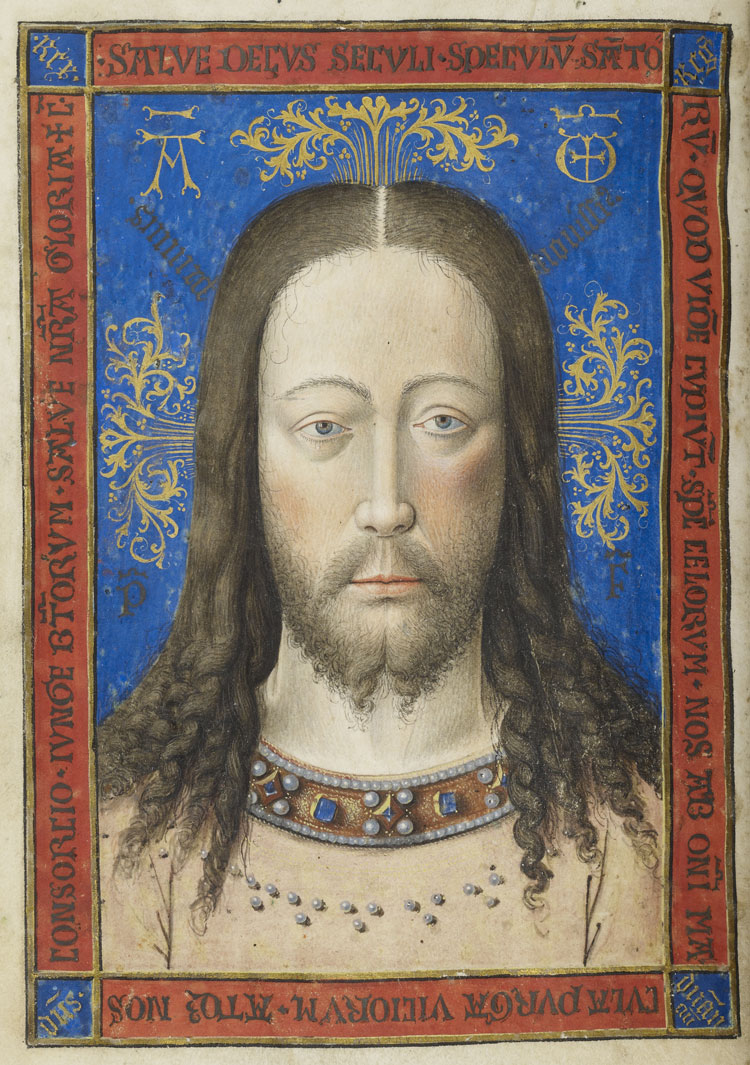 The most significant portrait of all is said to be the “divine portrait” of Christ’s face, known as the “true image’, or “Vera Icon”, believed to have been imprinted on to Veronica’s veil as she pressed it against him in an attempt to alleviate his suffering on his walk towards Calvary bearing his Cross. Van Eyck is known to have painted a version of this, which is now lost, but the exhibition closes with a number of copies, to reinforce his enduring significance. This, when one has come to see works by the artist himself, is something of an anti-climax, and I am not convinced that the pathway through the exhibition, or its layout as a whole, is necessarily as strong as it could be. That said, there is plenty of space to allow for the inevitable crowds it will draw, especially given its short run, and the gems scattered among the wider curation make it well worth taking your time to stop and look closely. Once they are back in the cathedral, the altarpiece panels will not be anywhere near as closely observable in the flesh, and the likelihood of so many other works by the medieval master being united again is next to nil, so this really is a once in a lifetime opportunity – and, without a doubt, one not to be missed. 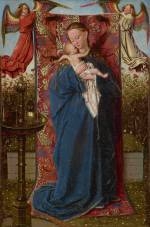 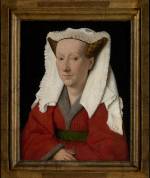 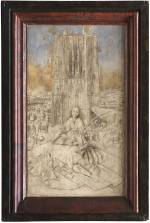 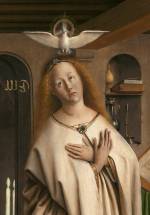 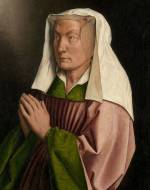