James 'Athenian' Stuart, who was born in 1731 and died in 1788, is a far less well-known figure in the Greek Revival movement in Britain than either Robert Adam (who was called 'Bob the Roman') or the patron and collector, Thomas Hope, renowned for his book, Household Furniture, published in 1807. Yet, arguably, Stuart was the key figure and as responsible for the Greek Revival as John Ruskin was for the Gothic Revival a century later.

Born in London into quite humble circumstances (he was the son of a Scottish sailor), Stuart showed early promise as a painter and, in 1742, set out on a journey to Italy and Greece, learning Latin, Italian and Greek and returning to publish De Obolisco, a treatise on the Egyptian obelisk of Psammetichus II that was afterwards described as 'a landmark in the history of archaeology'. However, it was his second trip to Greece, made with the painter Nicholas Revett in 1751, that established Stuart as an authority on all things classical, since the time was spent measuring and recording antiquities in great detail (as Ruskin did in Venice), which led to Stuart’s second publication, Antiquities of Athens (1762).

The exhibition in the Victoria and Albert Museum in London examines how this led to Stuart’s role in the Classical Revival by dividing his work into sections. The opening section, 'Journey to Greece and the Antiquities of Athens', includes his gouaches of the temples in Rome, the amphitheatre of Pola, the Acropolis and scenes around Athens, all of which are done when bright sunshine is moderated by clouds and the scenes are enlivened by people going about their daily business. Thus, Stuart is a tourist when tourists were rare and respected, and when the local population was unconcerned that it lived among the ruins of ancient civilisations.

The next section, 'Country Houses', notes that Stuart’s own buildings were very few and that most of his work involved making alterations and additions to houses in and around London. One of his own creations is Belvedere in Kent, while major work was undertaken to Kedleston Hall in Derby and Shugborough House in Staffordshire. Here, his contribution includes interior decoration and items such as tables, plate warmers, tripod stands and vases, all suggestive of an elegant, classical life in a much warmer climate.

This, too, applies to the work shown in Garden Buildings where, for Shugborough, he designed a temple called The Tower of the Winds, a Triumphal Arch and a Choragic Monument (derived from the Choragic Monument of Lysicrates that was variously adopted for church towers, garden buildings, pulpits, fountains and silverware). These creations remind us, that owners of grand houses set in a Classical landscape (often designed by 'Capability' Brown) liked to have a feature that could be the excuse for a leisurely walk or a topic for conversation. But for Nuneham Park in Oxfordshire, Stuart collaborated with its owner, Simon, First Earl of Harcourt, to design a classical building complete with dome and portico in 1764.

Given his London provenance, it is not surprising that Stuart is also represented by a section called 'Town Houses', the most spectacular of which is Spencer House in London whose Painted Room was created from 1756-1766 and whose settees and armchairs were among the earliest Neo-classical furniture made in Britain. These were in carved and gilded lime wood upholstered in green silk damask, but there is also a much simpler and very elegant washstand for Spencer House made in mahogany inlaid with padouk and boxwood. This particular piece would also sit well in a very modern interior.

London, too, is the setting for one of Stuart’s major public commissions, the chapel in the Royal Hospital in Greenwich for which he designed a three-decker pulpit in limewood emblazoned with medallions in Coade stone (the synthetic material used for the lion on London’s Waterloo Bridge). Other commissions included funerary art - sarcophagi, portrait busts and figures of grieving women - medals and a tea urn made by Matthew Boulton (c. 1770).

Given Stuart’s designs (often in pen and ink with colour washes) for chimney pieces, fireplaces, tables and wall decorations, it is easy to see how immersed he was in all things classical, an essential figure in a movement that saw no inconsistency in re-using the mythologies, architectural designs and decorative details that belonged to other countries and other times for a new movement in eighteenth-century Britain. Perhaps, since the country was busy building the greatest empire the world had ever seen, this was just more evidence of how Britons at the time saw the world as their oyster from which they could take whatever they liked. And, when it came to grand houses and expansive parks, Stuart showed them how to do this. The exhibition continues until 24 June 2007. 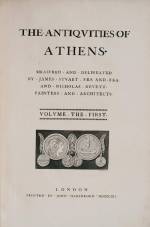 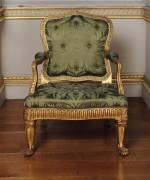 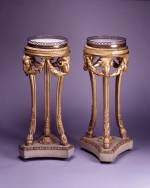 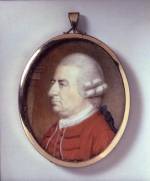 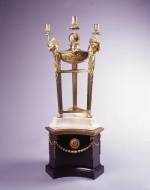