The Swedish artist’s works and her theatrical pieces – which include a giant hogweed, a giant otter giving birth and a toad doing gymnastics – make us look at the human race’s relationship with the natural world and the effects our interactions have 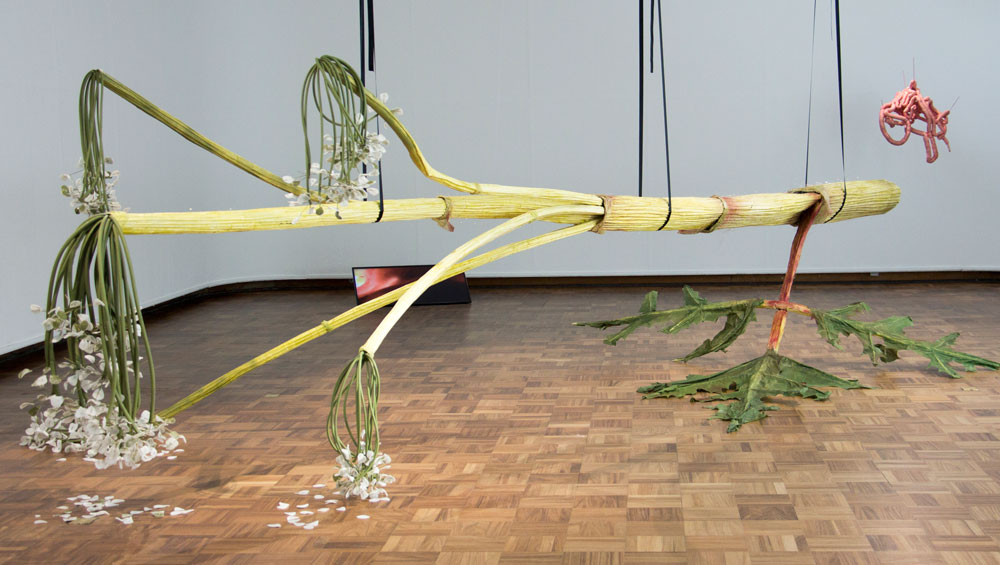 The Cooper Gallery at the University of Dundee is presenting the first UK exhibition of Swedish artist Ingela Ihrman (b1985). We Thrive follows her exhibition The Inner Ocean, at the Institut Kunst in Basel, and interrogates the manner in which we subvert and interact with nature. On arrival at the gallery, viewers encounter a large screening of Ihrman’s performance of The Toad (2013), in which the artist wears a toad suit and works out in a gymnasium that happens to be of a similar vintage and style to the university building. The amusing quality remains, but a solemn existential feel exerts a more lasting effect. Using theatrical props and costumes (to evoke an amateur ballet or school production of Toad of Toad Hall), Ihrman’s theatrical piece belongs to the postwar theatre of the absurd. 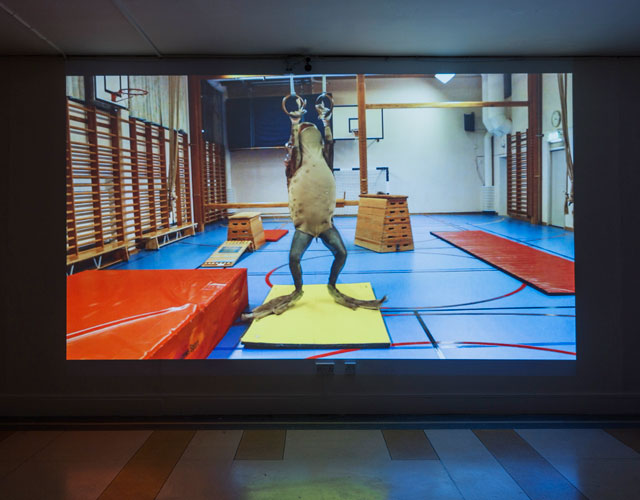 Aesthetically, The Toad is quite ridiculous, but there is also a sadness, or solemnity that conjures the meaninglessness of Albert Camus’ 1942 essay The Myth of Sisyphus. Humans are portrayed as inhabiting a meaningless world controlled by invisible outside forces. The hopelessness of toad’s repetitive gymnastic routine creates a sense that technology cannot mitigate against the disappointment and chaos that humans have wreaked in the natural world. Although there is pessimism implied in Ihrman’s creative practice, her choice of aesthetic saves it from being overly grim, leaving the audience with a salutary message but also a sense of impunity. 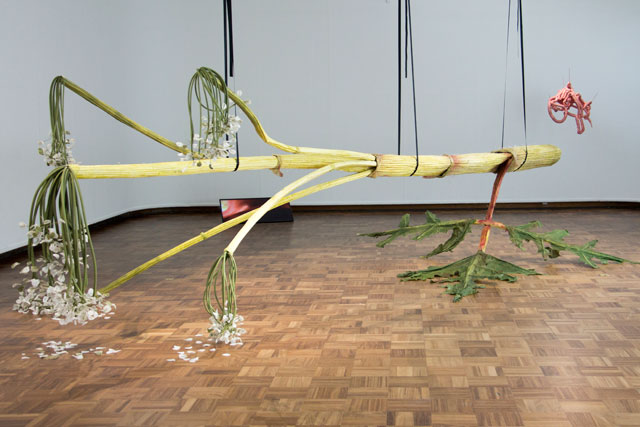 The upstairs installation of The Giant Hogweed (2016) is in keeping with the problematic plant, Ihrman’s creation being pretty from a distance but more unnatural and sinister close up. Giant hogweed, with its white flowers clustered in umbrella-shaped heads, was introduced to Britain in the 19th century for its ornamental dramatic appearance. It grows up to five metres tall, resembling oversized cow parsley. It has created a serious environmental problem, being extremely difficult to eradicate (it requires repeated applications of weed killer), partly because it grows at such a remarkable rate and because it chokes other plants. Its sap contains toxic chemicals that cause blistering to the skin and scarring. Its presence, not surprisingly, reduces wildlife. The artist has created the life-size form that is suspended in the gallery, complete with individually sewn white hairs.

In the same room as The Giant Hogweed, we learn how Ihrman has come to explore nature with a forensic detail and original stance. A video shows popular Swedish wildlife programmes from the 1960s and 70s with Jan Lindblad, who was a naturalist, film-maker and activist for animal rights. Sweden’s answer to David Attenborough, Lindblad even went as far as wrestling anacondas on camera. Perhaps Ihrman’s sensibility and humour share the desire to push an idea to an absurd level, particularly in the current exhibition piece Giant Otter Giving Birth. She says: “In Giant Otter Giving Birth, I’m wearing a giant otter costume and give birth to pups. The costume is both well done and not. A big mammal staging a birth in front of people creates a situation that is both amazing and gross. It is the closeup of how nature is portrayed in nature programmes.” 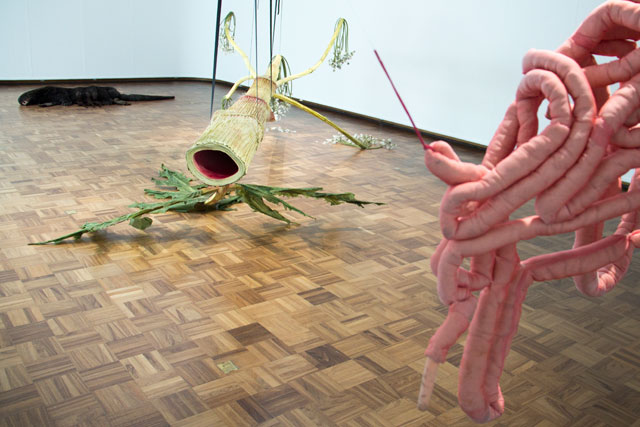 The Giant Hogweed is part of the performance and installation that also includes a soft sculpture of intestines. Ihrman seeks to reverse the hierarchy where human beings dominate nature and disturb its delicate balance. She asserts the necessity for society to endow the natural world with greater importance, where animals and plants are not simply to entertain or intrigue humans, but exist in their own right The present exhibition is a development from time Ihrman spent on the remote Isle of Eigg off the west coast of Scotland, where she carried out research on flora, slime and fertility. Sophia Hao, curator of Cooper Gallery, invited Ihrman to exhibit and was keen that she explore aspects of Scotland that might enhance her practice.

Ihrman says: “I was invited by Sophia to come here to Dundee. I have never been to Scotland before so I was curious, after seeing films, and I thought I might truly enjoy the landscape and that there might be some connection to Sweden, to the landscape that I have spent time with before. I was looking for opportunities to come for longer than just the exhibition; it is often very brief to do an install and then go home. I wanted to connect for longer to expand the opportunities to travel. I found out about the Bothy Project [a network of small-scale, off-grid art residency spaces in locations around Scotland and beyond]. A friend of mine had been visiting Eigg and was totally in love with the island so that encouraged me to apply. I hoped the ideas I was developing for a new work would be included in the early stage of this exhibition, but I got the flu on my last day there. It was still an amazing week there, and I spent time by the shore “A Great Seaweed Day” (although not included in this exhibition) is a title that I borrowed from Margaret Gatty, a writer with an interest in marine biology, of the 19th century, whose seaweed herbarium is kept at the University of St Andrews. I was interested in her work in an earlier project so it was a coincidence. There is a work upstairs in We Thrive, called Seaweedeblatet #1, a seaweed leaflet or paper. Gatty was the mother of seven children, and, after the seventh child, she went to the coast to take some fresh air, where her interest in seaweed was sparked. She went on to have three more children, as well as a career in marine biology. It is an example of how you can do something if you are very passionate, so it has a feminist dimension. 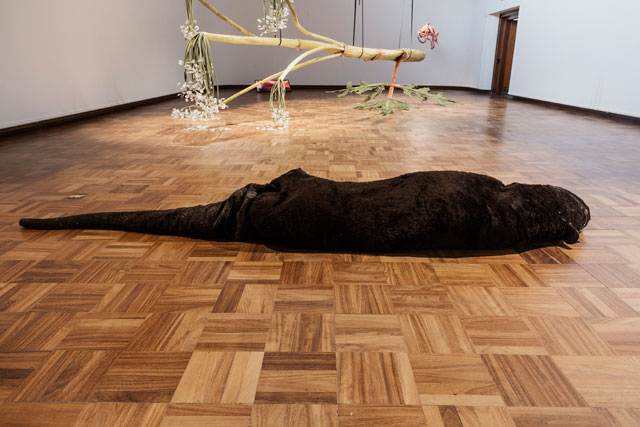 “My own interest in place and being by the shore on the Isle of Eigg and discovering seaweed served as a departure point for this new work. It was a wonderful place, very beautiful kelps, which we don’t have in Sweden, a lot of things that I did not recognise.”

Ihrman’s Giant Water Lily is an artistic fiction in which a gallery guide in a botanical museum in the artist’s hometown of Kalmar describes with convincing detail how the unique blooming of the flowers will take place before the audience’s eyes. Then the dwarfed hand of the artist spraying eau de cologne to simulate a real plant scent emerges from the fabric sculpture, which resembles a craft festival rather than a fine art sculpture.

Ihrman explains: “In the Giant Water Lily performance, I wear a giant water lily costume to stage a situation where the plant blooms two nights in a row in the summer in a public greenhouse. I am standing in the middle of the pond and I have invited people to come to this event through pink posters that I put up in the city. It is announced as blooming. I am using words such as: ‘This spectacular flower will bloom’, ‘People should take the opportunity to come and see the event.’ I am using material from old newspaper adverts when the water lily bloomed in greenhouses in Europe after it was discovered by Victorian travellers and brought back to the west.

“The vocabulary used portrays the flower, which was named after Queen Victoria (Victoria amazonica), as a superstar, a fantastic woman. Joseph Paxton’s design for Crystal Palace was inspired by the leaf of the water lily. My water lily was framed as something fantastic, ‘the wonder of the plant world’, and to put myself in the role of the flower felt brave. I was asking the questions: ‘How do culture and nature relate? What role does voyeurism play?’ Also gender, as the plant is always female. Nymphs in Greek myth were capable of making men fall in love with them and then taken underwater and drowned.”