A contemplative and almost audible hush has settled on the top two floors of The Photographers' Gallery.

In a new show entitled Home Truths: Photography, Motherhood and Identity, the concept of “motherhood” has taken the stage to be prodded, pawed, compromised and exposed, much like a prenatal woman approaching her due date. The experts doing the prodding, however, have a very mixed knowledge of what it is they are looking at. All have been children. Some are mothers themselves. Many will bear their own child, but some – mainly the men – will participate in this experience only at one or more degree of separation.

It is with a surprising measure of trepidation that many enter, therefore, and the silence in the gallery may be as much reverent or disturbed as it is contemplative. Even before arrival, important questions rear their heads: can a photographic exhibition about motherhood and identity make itself accessible to each and every member of its audience? Will the result be an overbearing, overweening desire to convince us of motherhood’s joy and sadness – its sentimentality? Or will it be raw, harrowing and more than a little bit disgusting?

The exhibition’s self-confessed intention is not to offer a cohesive identity, or succession of identities, that women are known to inhabit from the point of conception. Rather, Home Truths presents motherhood as a kind of flux, or influx, of demands, emotions, physical sensations and domestic and societal obligations. The medium of photography, rather than reducing this exploration merely to a display of shock tactics or appeals for empathy, has given the eight participating artists the flexibility to reveal the nuances of the mother-child experience across a spectrum of intimacy, from the up-close-and-personal to the psychologically removed and reinterpreted.

Despite this, Home Truths opens with one of the most emotionally and visually demanding photographs in the show: Elinor Carucci’s naked postnatal body, its stitched caesarean incision plainly visible and its sagging, exhausted flesh bared. The twins she bore are seen later in the series, breastfeeding, or being bathed, or cradled by Carucci as she sits on the toilet. On first appearance, Carucci’s photographic series, entitled Mother (2004-13), seems to do little to challenge the idea of motherhood, often bringing with it all of the discomfort and sentimentality that could be predicted of works in an exhibition with this premise. Yet the artist claims to have used the photographic act not only to document her experience, but also to help her to deal with her newfound identity as a mother. What we see is both a product and a process: a representation of motherhood, as well as a new sense of self built up with each click of the shutter.

Elina Brotherus has similarly used her own body to create a series of photographs documenting an emotional and physical journey, this time focusing on the desire for, and lack of, a child. In Annunciation (2009), she sits alone at a dining room table, or on a large sofa, plugged in to the contraption monitoring her IVF treatment. She waits. She cries. Conception is far from immaculate, in her case. There is blood in the toilet, a negative pregnancy test, and pack on pack of pharmaceuticals ready to be cocktailed. This is an idea of motherhood defined by its own absence: of pre-motherhood as a biological fixation accompanied by an anxious cycle of hope and disappointment. Viewers are asked to empathise with the clinical nature of a process that should be natural, and to mourn the continuing absence of a child. But this is arguably a tall order when the main visual prompts available are images of a lonely woman staring into space. We need more from this “journey” – more drugs, more blood, more indecipherable charts. These paraphernalia carry their own brand of desperation that has greater impact than tears and drab settings.

To say that the tone of the show is heavy would be an understatement, and yet a more refreshing approach is brought by the several artists who focus on the social pressures placed on women to take on a specific kind of identity and to be a particular kind of mother. Janine Antoni’s contribution to this exhibition, Inhabit (2009), centres on a large-scale photograph of herself suspended from the ceiling of a child’s playroom, her lower body clad in a doll’s house as a symbol of both giving and maintaining life. Alongside this, close-ups of the plastic furniture in the tiny rooms, with the artist’s legs forced into and filling the pre-moulded domestic spaces, suggest a socially constructed notion of maternal perfection that humans, with the inevitable limits on their natural capabilities, will regularly fall short of.

Hanna Putz’s photographs of her friends with their children on the one hand seems aligned with Carucci’s focus on the tender mother-child relationship, but, on the other, as in Antoni’s series, carriy a pertinent message about the displacement of a woman’s identity on becoming a mother. Putz’s friends retain their anonymity in these scenes, their babies covering their faces in every photograph in a way that recalls the tendency of parents to replace their own Facebook profile pictures with images of their children. It is as if the women’s adult identities and those of their children become inseparable as these children’s lives rapidly bulldoze all previously held interests and routines that occupied each before she became this other thing: a mother.

Curiously, the two male artists in the show offer some of the most fascinating insights into motherhood by means of their secondhand experience of it. This is not surprising if, as in the case of Carucci and Brotherus, artists’ work can suffer when their subject matter is too close to their own life for comfort. Fred Hüning’s three “books” of photographs – Einer (2010), Zwei (2011) and Drei (2011) – document the stillbirth of his child, his wife’s second pregnancy, and their happiness as their child grows up. Though extremely personal to Hüning, his is the eye that follows the story at one remove, from psychologically safer ground and, although his images are fairly conventional in their subjects and composition, they do point to the differing relationship between mother and child and father and child. His series implies the mother’s identity to be clearer cut due to the physical bond that she once shared with the child; the role of the father, by extension, is less definite, and would benefit from analysis in the same way that motherhood has done in Home Truths.

By far the biggest talking point of this exhibition has been Leigh Ledare’s series Pretend You're Actually Alive (2002-8), a photographic record of eight years of the photographer’s mother’s life that shows in unrelenting detail her emotional and sexual experiences during this time. She is seen not only crying, talking, caressing, but also near-naked in suspenders, and having penetrative and oral sex. It is difficult not to fixate on Ledare’s exploration of the erotic connection between mother and son – a highly taboo subject and one that the artist presents without shame. However, Ledare’s installation, in pointing the camera up one generation rather than down, makes a more poignant observation about motherhood than any of the other photographers showing here. Presenting his mother photographically as if his familial tie with her were severed or suspended, Ledare focuses on the dissolution of the identity of the mother over time as her role is no longer required. He photographs her as a parent would a child, discovering her freedom, her likes and dislikes, and recasts her as “person” rather than mother. In some senses the sadness of this is parallel to that of Brotherus’s IVF trauma or Hüning’s stillborn child: to put the question in reverse, how do mothers define themselves after they are mothers? Do they continue to live through their children, to hide behind them, or, like Ledare’s mother, do they bare their own faces and bodies once more? 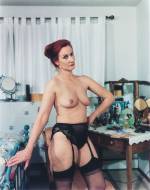 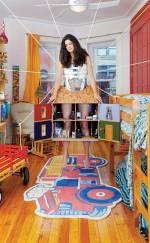