Tony Heywood and Alison Condie’s ode to Hastings attempts to combine psychedelic sculpture with plants, but the jarring mixture of the natural and the artificial fails to capture the essence of this crazy coastal town 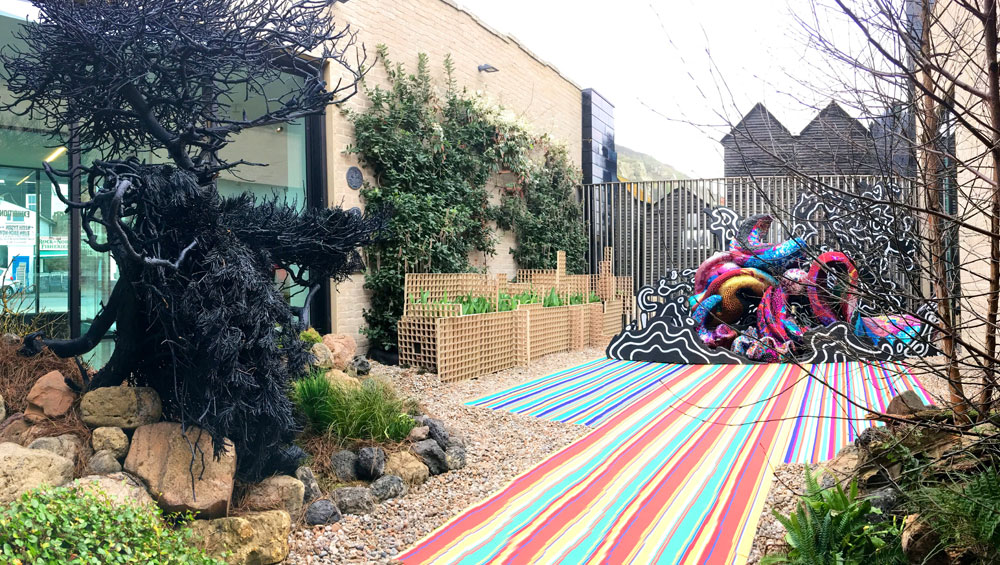 There is nowhere else like Hastings. The old town is, on the one hand, a crumbling relic, a charming but touristy caricature of its former self. Black Beard’s faded image swings from a wooden sign on the shingle beach, the Dolphin Inn sports a tableau on its roof, a shop mannequin is dressed in yellow fisherman’s waterproofs. The funicular railway rumbles nearby, taking tourists to the cliff-top, and, of course, the flashing, pinging arcade games and crazy golf course still occupy the seafront. This is not a wealthy place. As with the majority of British seaside towns, poverty has taken its toll. But, on the other hand, it is still a proud fishing town. Hordes of fragile-looking boats slide down the shingle beach into the English Channel on a daily basis and you can buy their catch almost as soon as they make landfall.

Nestled between the boats and the amusement arcade is the Jerwood Gallery, an incongruous, modern shrine to the artistic life of the British coastline and beyond. In the courtyard, at the heart of the building, is Tony Heywood and Alison Condie’s ode to this crazy East Sussex town. Heywood and Condie describe their work as horticultural installation art, but you won’t find them at the Chelsea Flower Show. Theirs is a jarring mixture of the natural and the artificial, as unexpected as finding a shiny art gallery in a crumbling seaside town.

Their psychedelic sculpture, entitled Head Land, sits on a bed of gravel, studded with brightly coloured rhinestones, a tangle of swirling, writhing forms, like mythical serpents rising from the sea. These sparkling snakes of gold, red, blue and pink are framed with black cut-outs outlined in white; cartoony representations of surf crashing against rocks. In front of this confusing jumble of forms lies a sort of runway, stripy like deckchair fabric, and, although not immediately obvious, the surrounding plants are part of the display. Rows of tulips line one wall and two rockeries house ferns, daffodils and trees. Among these colourful garden flowers, a seemingly charred tree, probably painted black, is the only hint that the artists’ influence extends to the flowerbeds.

The plants, though, take a backseat to the glitzy, headless creatures that inevitably draw the eye. The sculptural forms themselves are fun, but they bear such a tenuous connection to the flowers, that it easy to assume that the latter are incidental. Or you might ignore them altogether. If the sculpture were partly concealed among the plants, or disguised by the ferns, say, then there might be a more obvious relationship between the two. As it is, they appear entirely separate.

While there is something folk-arty about Heywood and Condie’s work – their rhinestone-covered sculptures could just as easily be decorated by shells and installed in an 18th-century grotto – there is also a theatrical feel. I can imagine an immense set design for Shakespeare’s The Tempest, or A Midsummer Night’s Dream, that combines natural materials with brightly coloured jewels. Their sculptures recall the magical, the surreal and the psychedelic and are full of potential. But, in the courtyard of the Jerwood Gallery, this installation feels as though it has crash-landed, an incongruous alien presence that falls short of the artists’ intentions, that it should “make you reflect on the place as a whole”.

If Heywood and Condie really want to embrace Hastings, they need to take their installation out of the gallery and into a setting that is both real and artificial (like the town itself), such as the smugglers’ caves, not 100 yards away. Mix the plastic jewels with ancient rock, light the space to confuse and disorientate, have fun with the touristy tat and the spectacle, not to mention the thrilling history of the place. Or relocate to the seafront, among the arcades and let some flashing fairground attraction melt into a rhinestone puddle. Hastings has so much to offer artists and there is so much more that can be achieved here. 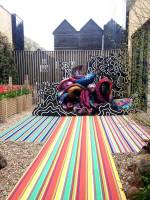 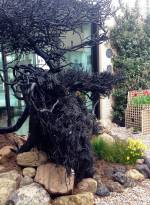