Although Henry Moore is best known as a sculptor, drawing was critical to his artistic practice. This exhibition is the largest of Moore’s drawings in more than 40 years 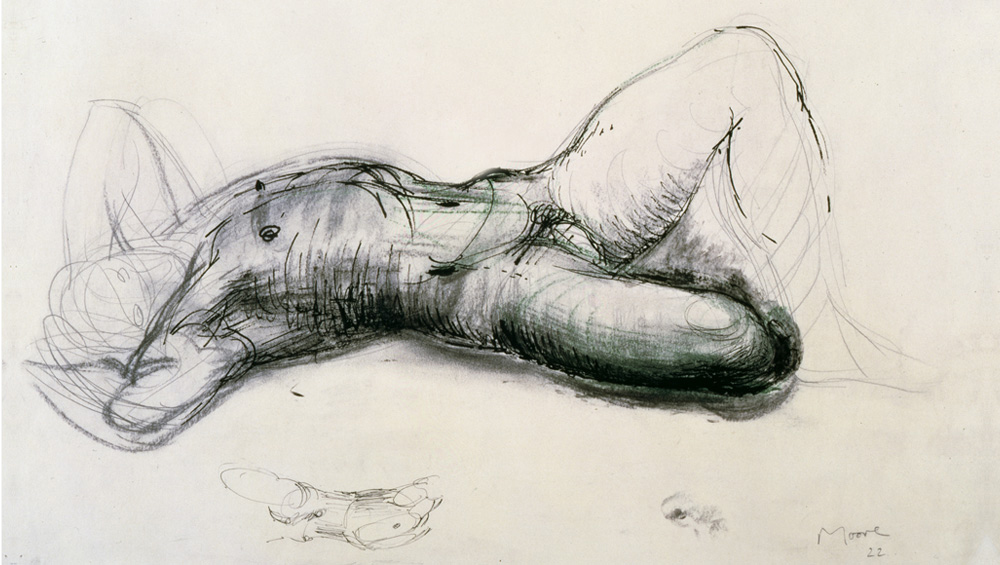 You might expect an exhibition of drawings by Henry Moore (1898-1986) to represent something of a departure from the sculpture he is mostly known for, and at times it is. You might expect the shift from three- to two-dimensional works to disrupt our understanding of the artist, and it does. You might expect the shift in size from large, often outdoor works to something more intimate and domestic in scale to catch us off guard, too. In the case of Henry Moore Drawings: The Art of Seeing, however, the drawings on display do more than this, they bring us closer to the artist and his sculpture. This is partly due to the context in which they are exhibited. It is impossible to walk through the grounds of the Henry Moore Studios and Gardens at Perry Green in rural Hertfordshire without considering that this is where Moore lived and worked from 1940 until his death. 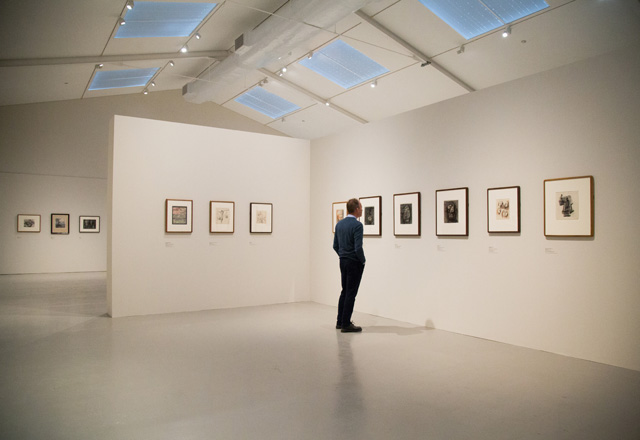 Drawing was essential to Moore as a tool for close looking: “Drawing, even for people who cannot draw, even for people not trying to produce a good drawing, it makes you look more intensely … Just looking alone has no grit in it, has no sort of mental struggle or difficulty. That only happens when you are drawing.”1 Moore was a prolific draughtsman and produced about 7,500 drawings over a period of seven decades, numbers that give some sense of how vital it was to him. The 150 works shown in this exhibition largely come from the Henry Moore Foundation’s own collection, supplemented by a small number of strategic loans from Tate, the British Museum, the Imperial War Museum and private collections.

Although the exhibition is arranged chronologically by decade, there are overarching themes explored in each period in a manner that is really helpful for the visitor. I appreciated the lightness of interpretation with just one main wall text per theme: 1920s Drawing to Learn; 1930s Drawing for Sculpture; 1940s Chronicling the War; 1950s Global Fame; 1960s and 1970s The Pleasure of Drawing; and 1980s Late Drawings. Individual images link to Moore’s sculptural practice, to significant events in his life and often, although not always explicitly, to particular objects elsewhere in the studios, house and gardens. I suppose this was the one area where I would have liked more explicit links made and direction to objects in nearby studios and gardens. 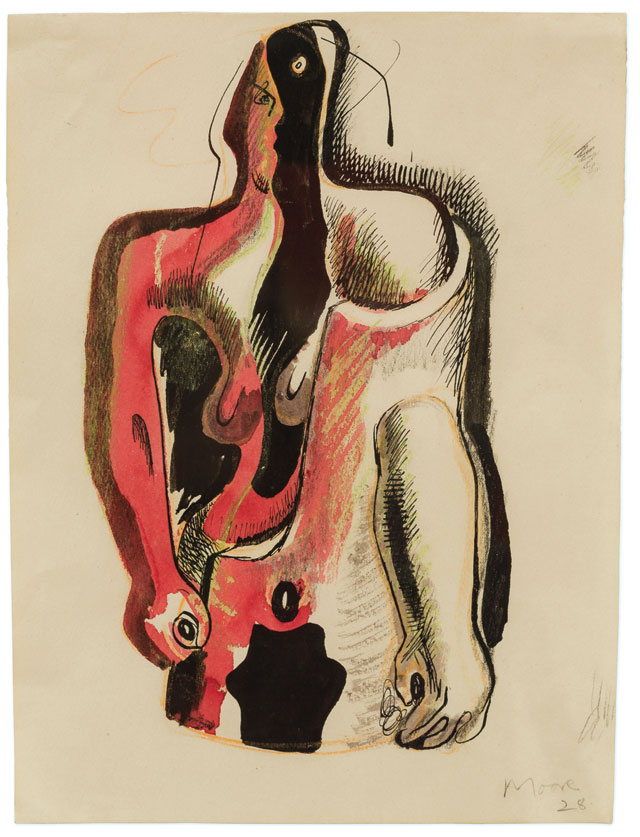 In Moore’s early drawings, he mainly studied the human figure, as well as looking at works by old masters and other artists he respected. Drawing from life was a central part of art school training during Moore’s time at Leeds School of Art (1919-21) and the Royal College of Art in London (1921-24). Leon Underwood was his drawing tutor at the Royal College. Drawing was also a method of note-taking for Moore as he browsed the collections of museums and galleries, especially the British Museum. 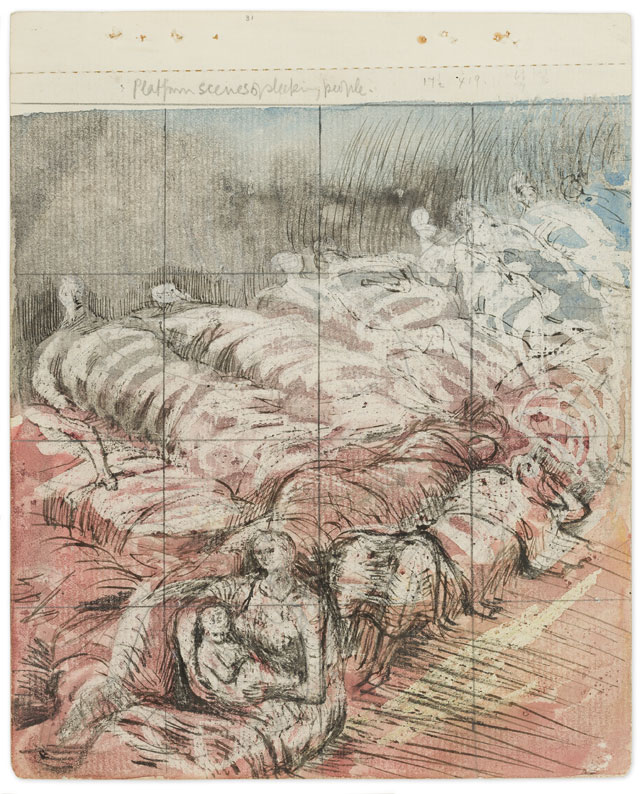 In the 1930s, Moore’s drawing, previously a tool for learning, became a method of developing ideas for sculpture, as well as a medium for completed works in their own right. Actively engaged with surrealism and constructivism, he developed a visual language that enabled him to abstract from natural objects, such as bones and flints, into human forms. In 1935, the increasing importance of his drawing to his practice was recognised with an exhibition at the Zwemmer Gallery in London devoted entirely to his drawings. 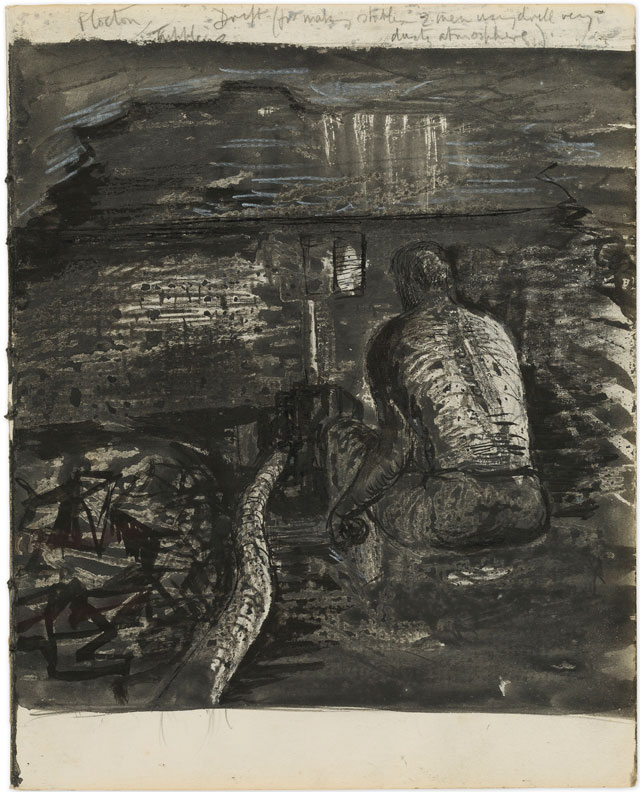 When bombing in September 1940 damaged Moore’s London studio and home, he left and moved with his wife, Irina, to Perry Green. The material restrictions of wartime meant he had to temporarily abandon sculpture, a move that resulted in drawing becoming more important than ever to him. Moore was commissioned by the War Artists’ Advisory Committee (WAAC) to document wartime London, and he produced sketches and drawings of Londoners sheltering in the underground. These are among some of his best-known and admired drawings. In a second commission from the WAAC, Moore was asked to celebrate Yorkshire coalminers and so we see the male figure at work. This section of the exhibition also contains drawings for textiles designs, which take away from the shelters and mines and signal the comfort of the domestic environment. 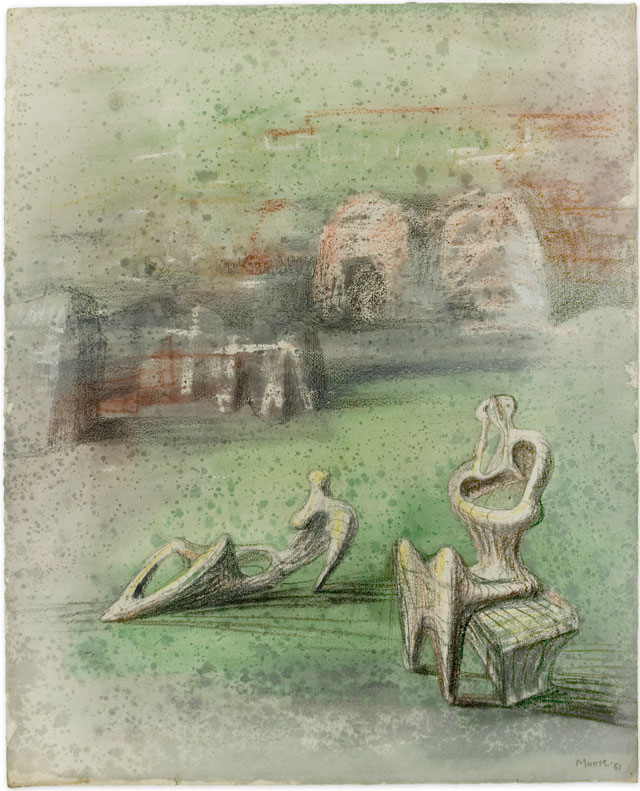 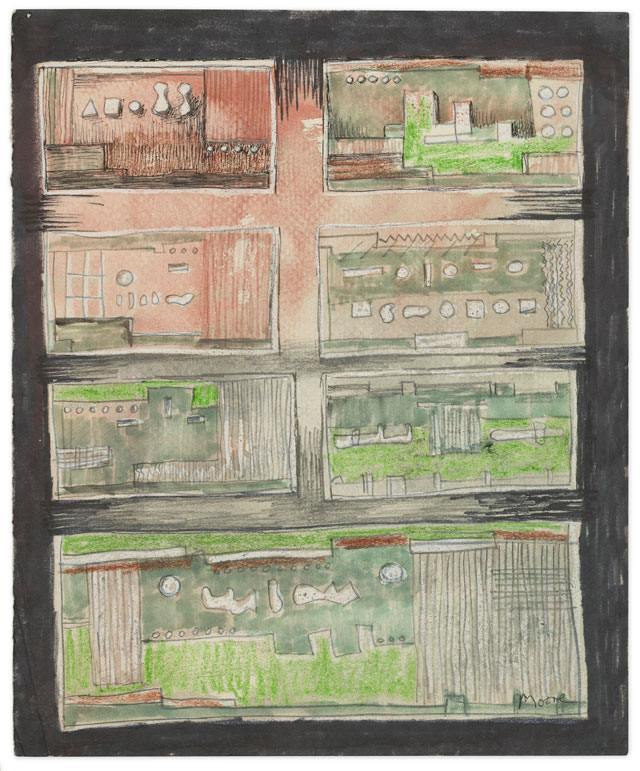 In 1946, Moore became the first British artist to have a retrospective exhibition at the Museum of Modern art in New York. Two years later, in 1948, he won the sculpture prize at the Venice Biennale. By the 50s, he had achieved worldwide notoriety. This was also a period during which he shifted from drawings to maquettes to develop sculptural ideas, and his drawing subsequently became more personal and expressive. Drawing also became a mode of visual research that enabled him to explore subjects unsuited to sculpture. 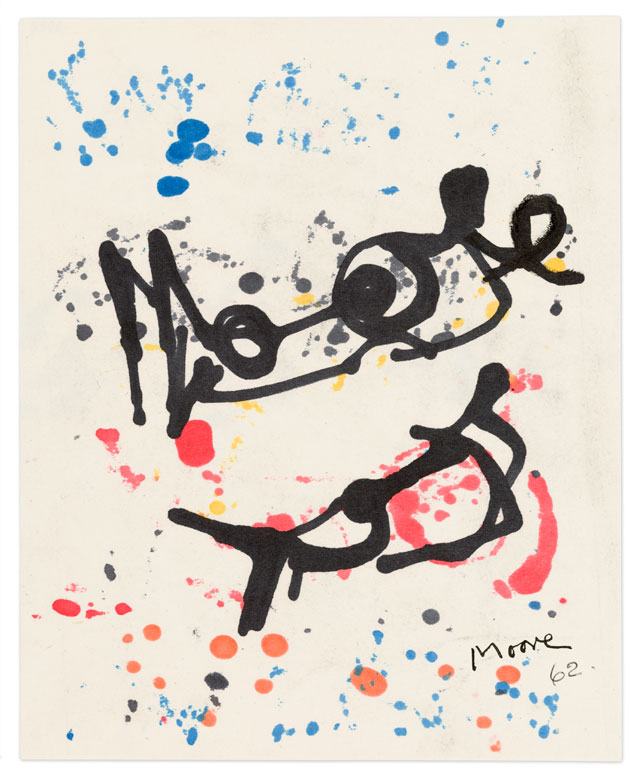 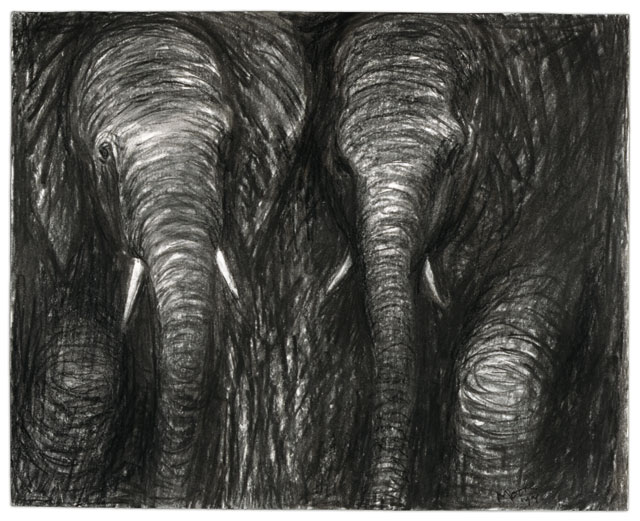 In the 60s and 70s Moore’s engagement with drawing became even more pleasurable than functional. No longer a preparatory activity for sculpture, his drawing explored new themes such as animals and landscapes, as well as returning to the old masters as sources once again, but not for the reasons we might imagine. For instance, in 1974, Moore was invited to reinterpret a picture from the collection of the Forte di Belvedere in Florence. He chose Giovanni Bellini’s Pietà (1470) as his starting point, but focused on its formal qualities and composition rather than its religious content. Moore also worked in new ways from photographic sources in this period. 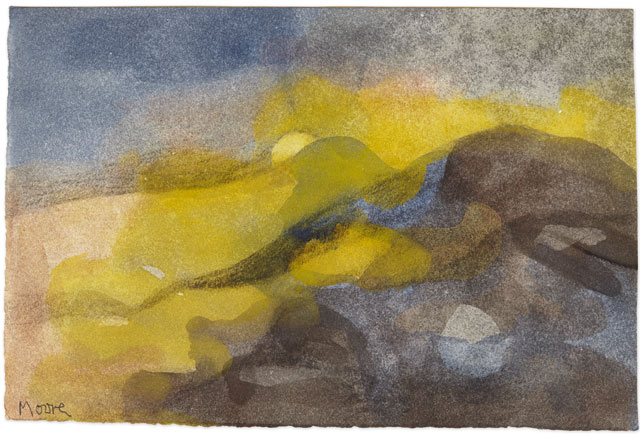 Moore’s late drawings are given an upper room in this exhibition. I suspect this may just be a matter of available space, but it has the effect of setting them apart, perhaps appropriate for works rarely exhibited and more sombre in nature than anything else on show. The drawings of the 80s have a much darker tone and often reference artists he admired, such as Peter Paul Rubens, George Seurat and Giovanni Pisano. In the last years of his life, his ill health meant he could not make sculpture, and drawing became more important than ever. 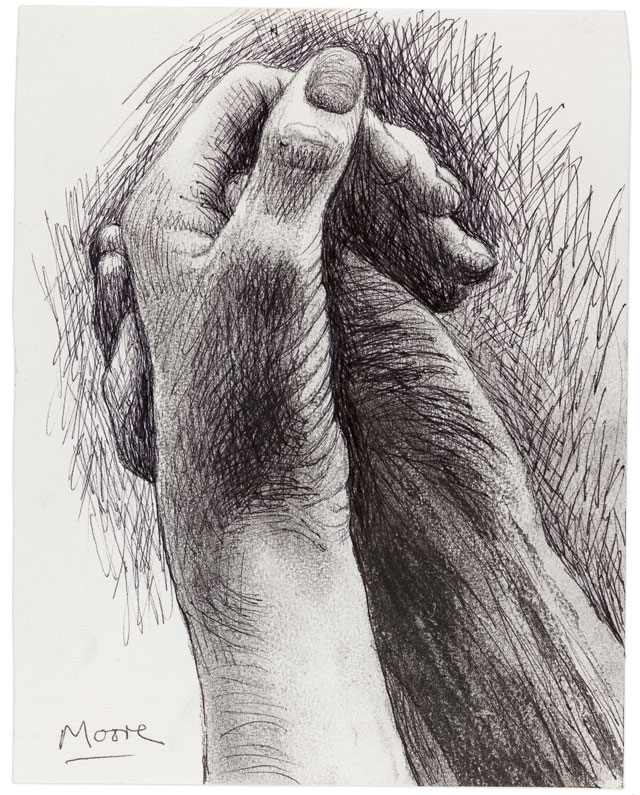 Ultimately, this exhibition leaves us with a sense of the joy and energy Moore found in the medium of drawing, as well as a real appreciation of the respect and tenderness with which he approached the human body as a vehicle for communication in his artistic practice. No works convey this better than the final two drawings displayed – The Artist’s Hand IV (1982) and Hands (1984-86). In each case, two hands are clasped together loosely as if to allow the exhibition visitor to take their leave but somehow take a little bit of Moore with them. This is the kind of intimacy that invites a renewed look at Moore’s large sculptural works and a fresh understanding, too. 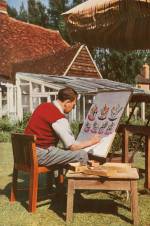 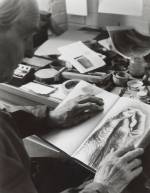