A treasure trove of an exhibition unveils Moreau’s wondrous watercolours, not seen in public since 1906 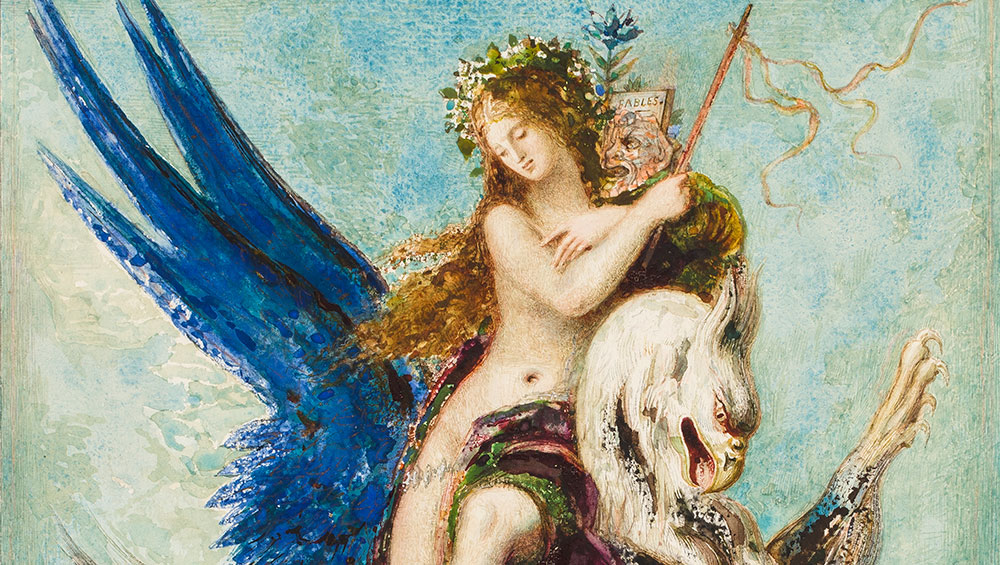 Antony Roux seemed to have it all – paintings by Camille Corot and Eugène Delacroix, sculptures by Auguste Rodin. But there was one thing the collector coveted above all: a watercolour series based on the Fables of the 17th-century poet Jean de La Fontaine. In 1879, Roux assembled a band of the leading artists and illustrators of his time for the task, including Gustave Doré, Jean-Léon Gérôme and Henri Gervex. Two years later, almost 150 watercolours were exhibited in a Parisian gallery. 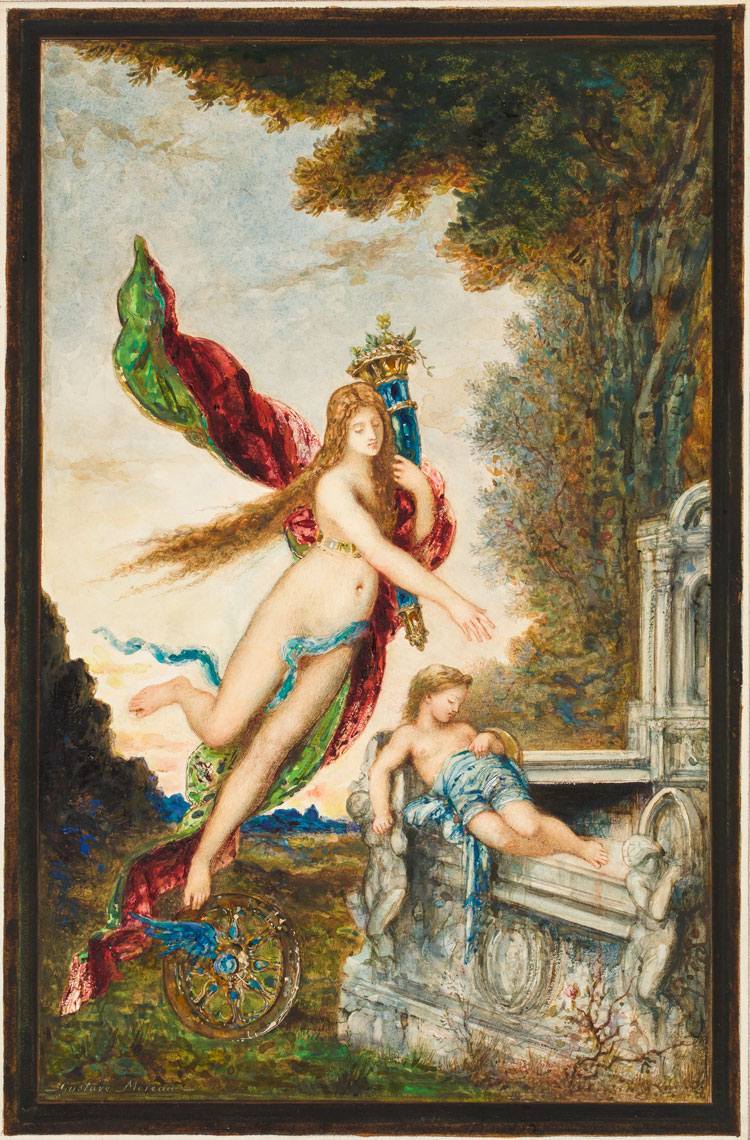 One artist was the clear standout. While the other artists had followed Roux’s brief, Gustave Moreau (1826-98) had breathed new life into Fontaine. The critic and educator Charles Blanc wrote: “It is like being in the presence of a visionary artist who was a jeweller before he was a painter and who, drunk on colour, has ground up rubies, sapphires, emeralds, topazes, pearls and mother-of-pearl to make his palette.” Roux entrusted Moreau with the series’ completion, and later displayed all 64 in his Parisian residence, removed only for exhibitions in 1886 and 1906.

They have not been seen in public since – until now. A new exhibitionat Waddesdon Manor in Buckinghamshire (it will travel to Musée National Gustave Moreau in Paris, in October) lifts the lid on a key passage in Moreau’s career. The location is fitting. Waddesdon was built by Baron Ferdinand de Rothschild as home for his own astonishing collection of paintings and objets d’art. Sheathed in the form of a Renaissance chateau, it remains one of Victorian England’s greatest treasure troves. 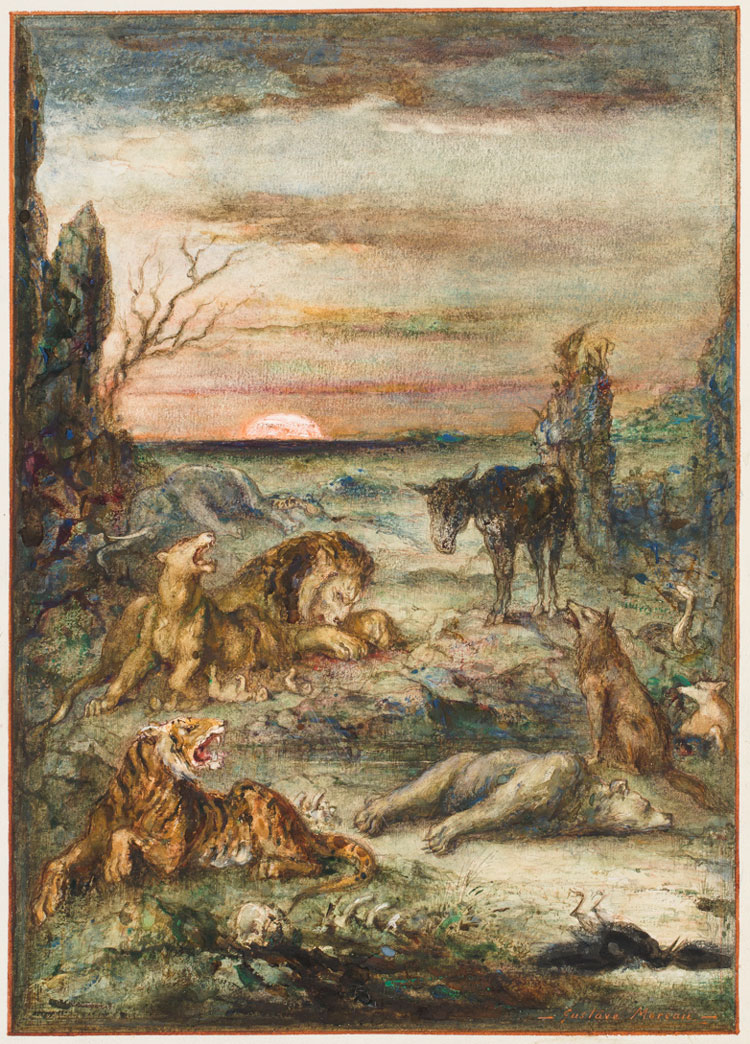 Moreau was a favourite of several Rothschilds. Ferdinand’s contemporary, Baron Edmond de Rothschild, whose son would inherit Waddesdon, called Moreau “the greatest artist of modern times”. Edmond’s daughter, Miriam Alexandrine, followed in his footsteps, acquiring The Fables after Roux’s death in 1913. Almost half were lost in the second world war, but the remaining 35 have been owned by a private Rothschild collection since, with the exception of The Peacock Complaining to Juno (1882), donated to the Musée National Gustave Moreau. 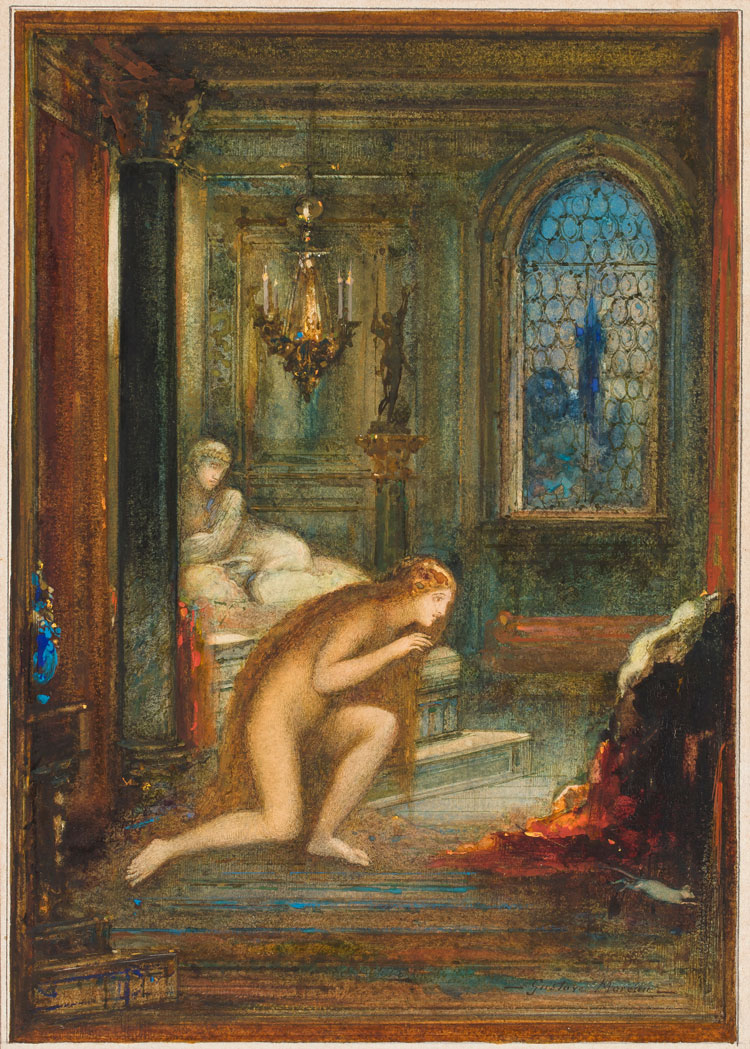 The exhibition fills just a single room on Waddesdon’s upper floor, but it unlocks many worlds of wonder. Just as La Fontaine’s fables were cobbled together from far-flung sources, so are Moreau’s interpretations a miscellany of theme and style. Some pieces, such as The Dragon With Many Heads and the Dragon With Many Tails (1880), feature complex arrangements of scenes. Others, such as The Shepherd and the Sea (1883), are Turner-esque in their depiction of open empty space. All are rendered with an astonishing attention to detail that makes them seem much larger than their compact forms. 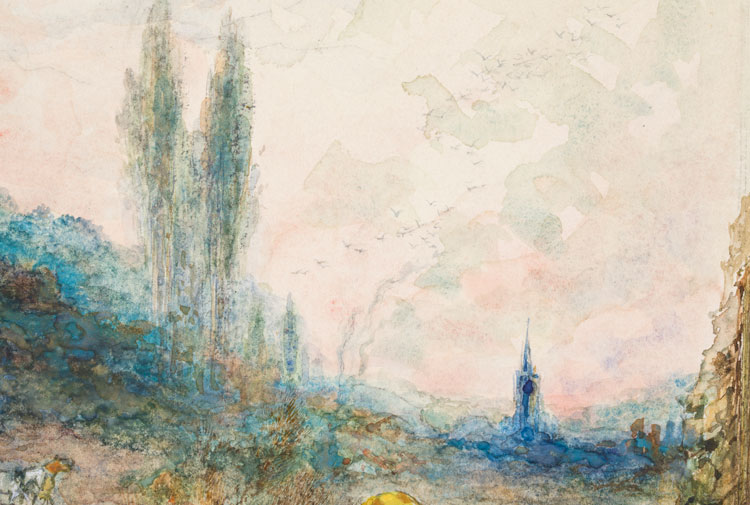 Moreau was working amid a watercolour revival led by Delacroix and Théodore Géricault. Like them, he strove to expand the purview of this once-neglected medium. One of the ways he did so is by adapting from the oil masterpieces of the past. Fortune and the Child (1883) shows a scene of classical beauty that wouldn’t be out of place in Titian. The Miser and the Monkey (1879), with its contrast of exterior light and interior gloom, feels like a tribute to Rembrandt. For The Dream of an Inhabitant of Mongolia (1881), Moreau created a full-bore orientalist fantasy, stuffed with luxurious fabric and patterns, while the famous tale of The Town Rat and the Country Rat (1881) is set amid quotations from Dutch still life. 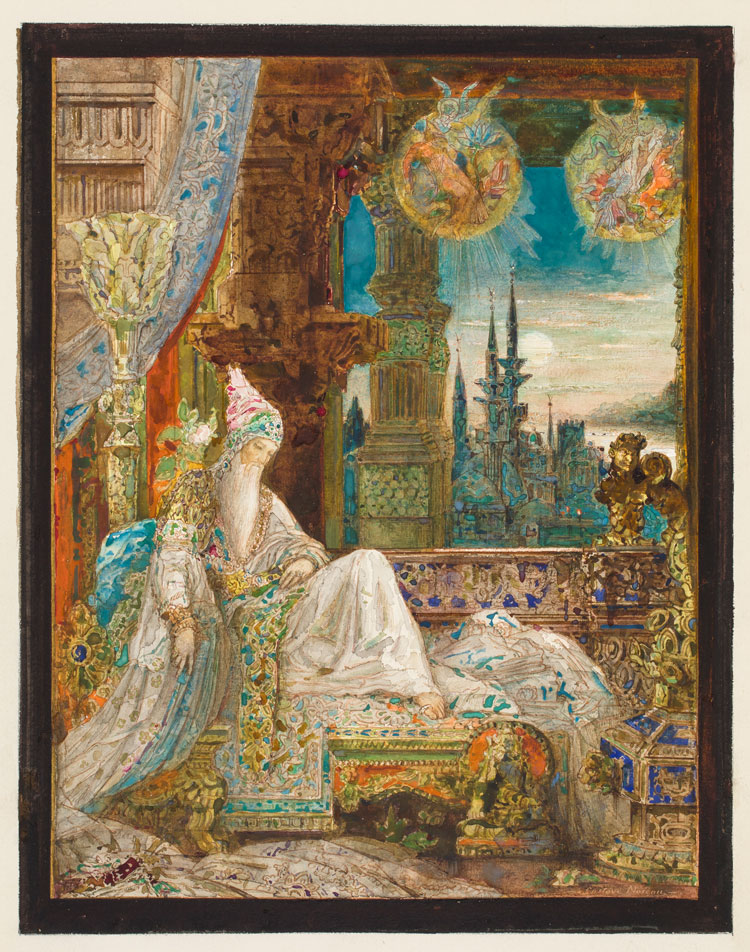 As this propensity for far-flung borrowings demonstrates, Moreau is a difficult painter to categorise. He is often regarded as a leading symbolist, and he shares that movement’s obsession with mythological scenes and the unseen world. Moreau wrote in a letter: “I believe neither in what I touch nor in what I see. I only believe in what I do not see, and solely in what I feel.” But the label hardly holds him. He was trained at the École des Beaux-Arts following the neo-classical model of Ingres, but his exotic and allegorical subject matter owed more to the Romantics. English critics called him the French Edward Burne-Jones (French critics called Burne-Jones the English Moreau), but the visionary quality and aesthetic exploration of his work seems distinct from the staid medievalism of the latter pre-Raphaelites. A better British analogue might be William Blake, whose prints share the Fables’ hallucinatory quality. 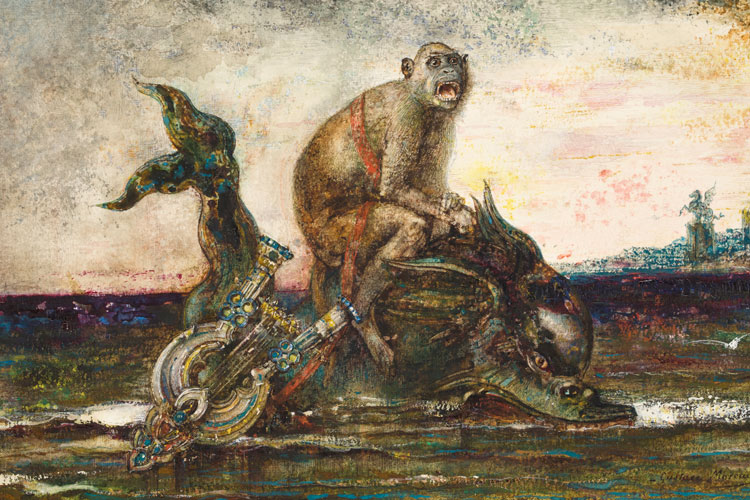 Some of his contemporaries were convinced he was a sort of modern hermit, living alone with his fantastic visions. “He is a mystic,” wrote the novelist and critic JK Huysmans, “locked up in the centre of Paris in a cell to which not even noise of contemporary life can penetrate”. Huysmans was not entirely correct. Though not the most social of artists, he was a much-garlanded part of the Salon establishment. During the Siege of Paris, he joined the National Guard to defend his city against the Prussian army, retreating after he experienced paralysis in his arm. The despair felt after France’s defeat weighs heavily on his work, as does the violence of the Commune that followed. 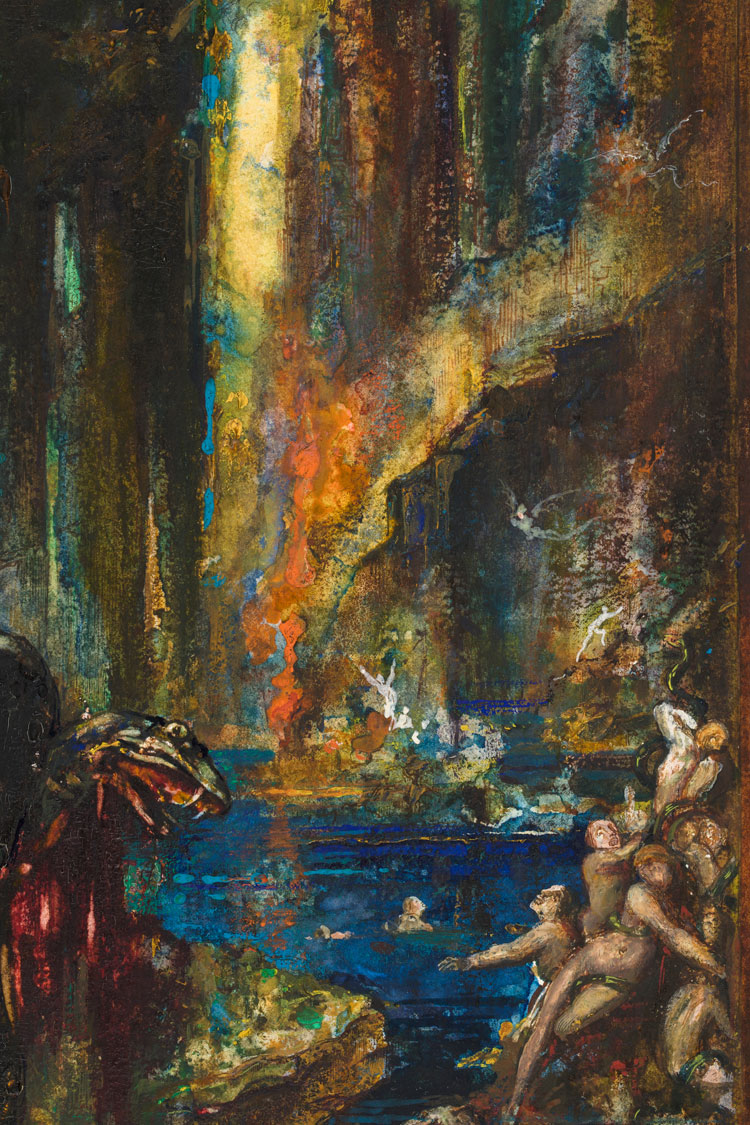 You can see some of this disenfranchisement in the Fables. The Head and the Tail of the Snake (1884) features doomed bodies drowning in the Styx, victims of violence. The Animals Stricken With the Plague (1883) captures a world without hope, with a bear, bird and lion cubs united in death. Symbolist dandy Robert de Montesquiou described the scene as “visibly putrid”. The Frogs Who Ask for a King (1884) depicts a band of amphibians who, tired of democracy, ask Jupiter for a monarch; the god sends a crane, which begins to eat them. There’s a Goya-esque terror to this scene, with a band of all-too-human frogs terrorised by their titanic, unstoppable assailant. Moreau seems to be asking if humans ever get it right. 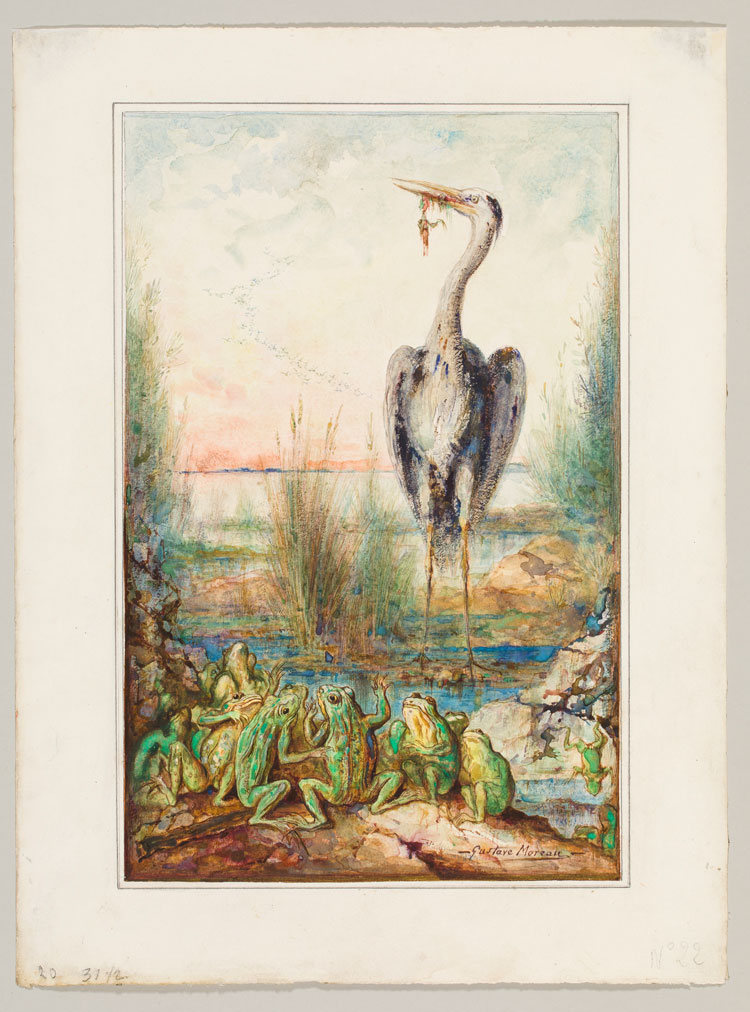 Moreau also left his mansion for more practical purposes. For The Fables, he headed out to the Jardin des Plantes, then Paris’s main zoo, and set about sketching the exotic menagerie. The effort paid off. From frogs and mice to lions and tigers, Moreau presents the animal kingdom with remarkable accuracy. But, following La Fontaine – whose work raised questions of animal intelligence and speech – he also imbues them with human qualities. The Monkey and the Dolphin (1879), about a primate who boasts about his achievements, captures the monkey in a disconcertingly man-like face, his mouth chattering away as he hitches a ride on the virtuous cetacean. The Elephant and the Monkey of Jupiter (1882), which illustrates a trifling tale of misplaced self-importance, captures a haughty gleam in the elephant’s eye. 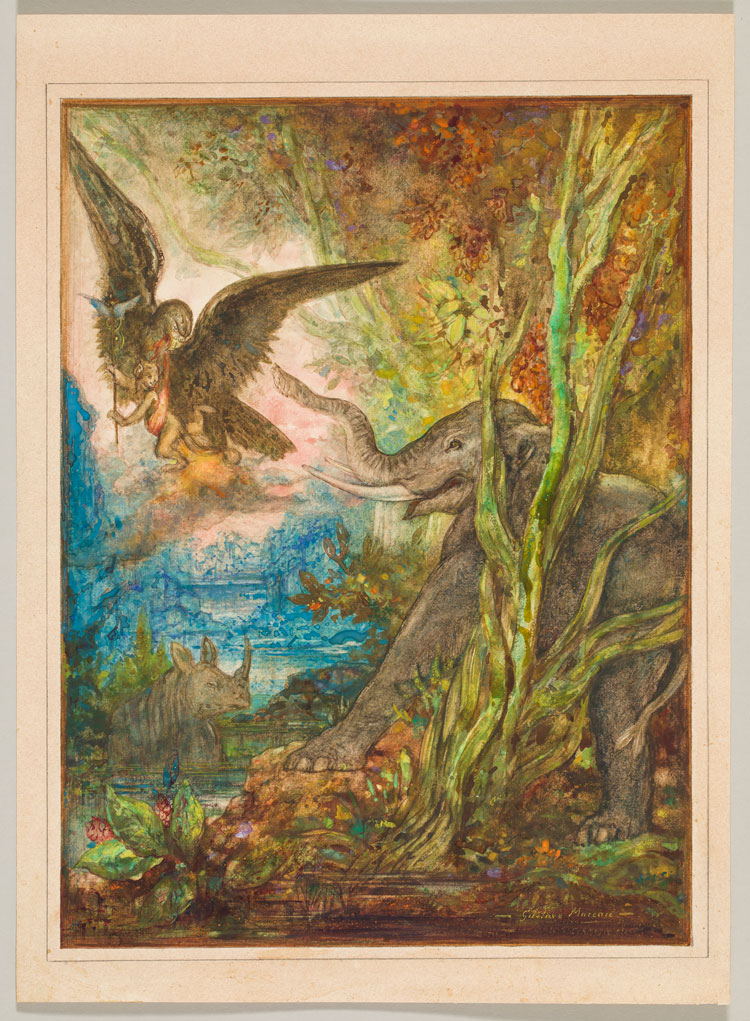 In her superb catalogue essay, the curator Juliet Carey notes the shadow of Darwin, whose elision of the distinctions between man and animal jolted the world towards modernity. This is not the only thing that makes Moreau’s watercolours seem the products of a new age. The other is a sense of unbound freedom. The Lion and the Gnat (1879) centres around a tree that seems less a depiction of nature and more an impressionistic essay on the texture of bark. In The Head and the Tail of the Snake, Moreau depicts a cavern as a riot of explosive colouration, an action painting in miniature. Late-19th-century French art contains many more obvious routes to modernity. But this unmissable jewel of an exhibition proves that Moreau was no backwards-looking recluse. 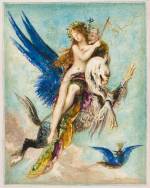