The artist and psychotherapist discusses the intertwining of his two careers, the importance of loneliness to the creative effort and the fear of facing death

Grant Clifford was born in 1944 and grew up in Perthshire, the son of Irish parents, and began drawing at an early age. He attended what is now the Duncan of Jordanstone College of Art and Design in Dundee, where he later taught drawing for more than 30 years. At the Royal College of Art, London, in the 60s he absorbed the latent atmosphere and formal influences that also fuelled the work of RB Kitaj, David Hockney and John Bellany.

Strongly influenced by the writings of Carl Jung (1875-1961), Clifford went on to train as a psychotherapist, and he continues in private practice today. His work is at once intensely personal and created with great knowledge of classical literature and the history of art. From early works that harnessed a deep sense of aloneness experienced within both his family and the wider world, he has gone on to create poignant universal images. I visited his home and studio in Broughty Ferry, near Dundee.

Janet McKenzie: When did you start drawing, and what did it enable you to achieve?

Grant Clifford: The earliest drawings I can remember were copies of ships, locomotives and classical sculptures from photographs in the Encyclopaedia Britannica bought from a travelling salesman. I was in primary school and drawing gave me a sense of self and self-confidence that I could not have achieved otherwise.

JMcK:What sources did you draw on for your early work?

GC: I worked from nature and photographs of animals and birds. My first oil paintings were copies of works by [the ornithologist and painter] Peter Scott. My mother bought me a set of oil paints. I remember the thrill of the smell and the excitement and fear of starting. I still feel that fear starting a painting.

JMcK: Carl Jung has been an important influence on a personal level and in your choice to become a psychotherapist. What does Jung offer artists?

GC: Jung’s insights into the deep psychology of human beings encouraged me to explore and understand myself and others in a compassionate way. My training and practice in psychotherapy deepens me artistically. We have a personal unconscious, but also partake of a collective unconscious shared on a global level. This is important for artists to recognise; it gives a kind of permission to tap into cultural imagery from around the world – as the postmodern movement has done.

JMcK: What did you learn at the Royal Academy, and what does your work from that period reveal about your experiences there?

GC: My three years at the Royal College of Art in London brought me into contact with a mind-expanding collection of wonderful, eccentric people. Carel Weight was head of school and I think the policy was to elect unusual, as well as talented, staff and students on to the faculty. “Sex and drugs and rock’n’roll” was the romantic ethos of the time, especially in London. My temperament was more suited to study, and I deepened my interest in classical and modern philosophy and in reading and writing poetry.

JMcK:Solitude is a discernible presence in many of your works, vital for an artist but also uncomfortable.

GC: Loneliness and isolation is the existential concomitant of the solitude necessary in order for the creative person to produce and develop ideas and work. In London, I felt lonely and began to see loneliness all around me. I made a series of large paintings of solitary Asian women in exotic dress standing alone in gloomy underground stations. I found a way over a wall into London zoo in Regent’s Park and spent hours drawing the bored, depressed looking animals lying around in their concrete enclosures. These drawings and paintings were the beginnings of my continuing interest, as an artist and as a therapist, in our human and animal condition.

JMcK: Your paintings are essentially about men and women, familial dynamics and the archetypal relationships that override individual human lives and the decisions we make. Can you explain the work Eros and Thanatos?

GC: According to Sigmund Freud, sex and death are the two polarities around which the dynamics of our life revolve. Our powerful sex drive is sometimes countered by a death wish. Certainly, our urge to procreate, to regenerate ourselves and our species, is intertwined with our knowledge of the inevitability of death and ending. In 2013, I painted Eros and Thanatos as two angels wrestling together, falling through space into the opening petals of the waiting flower of the Earth; the angels are indistinguishable from each other.

GC: In Japanese drawing the space between the marks is as important as the marks themselves. One of my favourite poems is Animula by TS Eliot. The poem describes the ensouling of the infant child as its perception develops. Initially, the child is only aware of flat pattern; then, as it begins to crawl, it discovers betweenness and depth in the third dimension. The painting celebrates the birth and early development of my first child. By putting the Japanese zen of mark-making and Eliot’s poem together, I found a way into imagining the experience of my infant child.

The Flowering of Michael celebrates the development of my much younger brother, a shy boy who blossomed into a brilliant martial artist who runs a huge organisation all over Scotland of young and old martial artists. I explored the Japanese mark-making idea again, but using more antagonistic diagonals and stronger tonal contrasts to create a sense of dynamism and movement.

JMcK: How do the two activities of painting and psychotherapy enable you to rationalise dichotomous or fractured aspects of human experience?

GC: Meditation and reflection are two important tools of artists and psychotherapists. An artist uses creativity and the act of making, which takes time, to process ideas, impulses, urges, feelings and sensations, which can often be overwhelming. Action over time is one of the best ways of processing and discharging feeling and of changing mood. The psychotherapist learns to recognise that, no matter how overwhelming feelings seem, they are only a part, not the whole, of us and they can be actioned on in order to reduce their potency. Breathing and attending to breathing, consciously and unconsciously helps in all forms of creative work and in psychotherapy.

JMcK: Your recent fight with cancer brought you face to face with your own mortality and it has influenced your work. From the perspective of psychotherapy, and given that death is an intrinsic part of life, why do we experience such irrational fear of the inevitable?

GC: Ten years ago I was operated on to remove four fatal cancers from my body over a period of 18 months. I was filled with all the fears that any human being would have. My worst fear was of losing the relationship with my wife and that somehow I had let us down by getting ill. Close to the time of operation, the tension, anxiety, guilt, despair and remorse left me. I felt calm and total peace. On reflection, if we take away all the attendant negative feelings, is there anything to fear in death itself?

JMcK: The painting Frieda among the Swallows (2010) departs from previous work in terms of a heightened palette, structure and mood. Can you explain what motivated the work and how you achieved a sense of the uncanny, positive chaos and visual excitement?

GC: Life, Life, Life. Our puppy Frieda came into our life. I was recovering from my ops. I couldn’t yet run and dance with joy, Frieda did it for me. She chased everything, including the summer swallows in the park. The painting celebrates one of Frieda’s chaotic dashes through an avenue of overhanging cherry blossoms chasing the birds. All the contents of the painting are as randomised as possible, which heightens the importance of the blue sky even more in keeping things together. 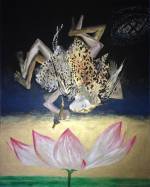 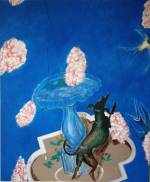 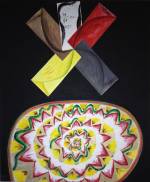