Pentimenti, Godwin Bradbeer’s new show in Melbourne presents work in a figurative mode, for which he is now well-known, as well as works in media less frequently associated with his practice.

“Pentimento” by definition refers to a visible vestige of a form that remains as a consequence of the artist changing his or her mind.1 Meaning Italian for “to repent” implies the need to improve on an original plan or form; in current terms it implies the trueness or original quality of a work, in contrast to a photographic or mass produced image. Bradbeer uses the term to refer to his long preoccupation of pitching perfect and imperfect against each other: the nobility and ignobility of the human condition.

“My existential conception separates the flawed struggle of rendered figuration from the impossibly perfected surfaces of commercial digital culture and in doing so seeks to find a testament to the enigmatic nature of our flawed human beauty. As a figurative artist who developed in my art with a constant endeavor after visual acuity, it is deeply ironic that in the twenty first century it should be the flaw, the error, the struggle for verisimilitude that identifies such drawings as works of experience”.2

The conceptual and the subjective, arguably the most vital components of contemporary art practice - connect in drawing more forcibly and more appropriately than in any other form of art. It could also be perceived as ironic, that charged with the knowledge of new technology and the multitude of new forms and attitudes, that artists have chosen drawing in manifold forms. Over the past ten years, drawing has assumed a pivotal role in defining contemporary culture. Since the 1970s Bradbeer’s work has been characterised by the search for a visual surface and rendering of subject that is precise and true. His most recent work continues to affirm the importance of visual accuracy, though the conceptual or abstract truth is also asserted. In an attempt to understand self and in doing so heighten the worth of his imagery, one cannot imagine any objects more appropriate than the 145 small blackboards retrieved from his primary school, in their capacity to allude to experiential and philosophical concepts.

Imperfection in terms of their broken edges- worn with time, the patina, suggestive of a witness to the education of young minds, and touch become Bradbeer’s visual icon or tabula rasa. In colour and finish, for the artist added marks and polished the surfaces before installing the individual blackboards, the large installation is remarkable in the manner in which it inhabits the artist’s oeuvre so seamlessly: “Additional to this search for visual appearance is the more profound artistic purpose of determining conceptual veracity for an abstract truth about a subject (ourselves) that is both dreadful and wonderful. For me, the truth of the matter, the authentic article - despite its beauty - is never immaculate. Indeed authorship itself is made manifest by such pentimenti within the work of art. Perhaps I love drawing especially because it is an open cut into thought and feeling, less concealed by the continuity of surface and the confection of colour that distinguishes most painting”.3

Tabula Rasa: A Suburban Archaeology is a large single wall installation of objets trouvé, which have particular resonance for the artist on personal and philosophical levels. On a personal level he addresses the difficult yet life-changing act of migration from Scotland to Australia with his family as a young child, alluding to the act of faith that migration requires and in turn the rewards of greater freedom and opportunity. Education is seen as key to the process of improving status and hope. Tabula Rasa in Latin equates to the English notion of “blank slate” (or specifically “erased slate”, which refers to writing on a slate sheet in chalk), in philosophical terms it refers to the ideas expounded by John Locke (1632–1704) which characterised the mind of a newborn child as being in an uninformed original state, “a blank sheet of paper, a clean slate, a tabula rasa”. Implicit in Locke’s treatise is a doctrine of egalitarianism. Bradbeer acknowledges this as being consistent with a migrant family’s experiences of wonderment and hope but he also asserts the vulnerability with great poignancy through the voice of the artist as child. It is a mature artist’s skillful reckoning of the two that makes the work exceptional.

“[There is] nothing more evident, than that Creatures of the same species…born to all the same advantages of Nature, and the use of the same faculties, should also be equal amongst one another without Subordination or Subjection… " John Locke’s “egalitarianism is one of the aspects of the modern view of human nature, so different from the Platonic or medieval outlooks with their inborn inequalities foundational to nature-or God-ordained hierarchies in society, church, and state. For Locke, there are no natural obstructions that would block development of children's native potential for acting freely and rationally. True, some possess more agile intellects or stronger wills than others; but all are innately equipped to become persons capable of freely following their own reason's pronouncements, that is, to become autonomous beings”.4

The human figure is central to the art of Godwin Bradbeer whose metaphysical works seek the reconciliation of incompatible states, “the potential range of the figure for catastrophe and exhilaration [is] suggested and sustained in the way it is configured. It’s not just a registration of the visual moment of the individual, it’s some kind of testament to human possibility”.5 Tabula Rasa can be seen in this context, yet visually it is a departure from the beautifully worked large-scale drawings. The artist visited his early childhood by travelling to the northwest Melbourne suburb of Broadmeadows (1955-64). There he and his family as newly arrived migrants from Scotland, attended church in kilts and became pupils at the newly opened Campmeadows Primary School. In 2011, with two of his brothers, Jamie and Mark and their friend Peter Van Der Veer, all ex-pupils, decided to visit the school that had for some years been deregistered. Their visit was in fact an act of trespass for the building was a desolate vandalised building.

“In whatever condition the school remained it would be very unlikely to find anything – other than the essential architecture – that might be a fragment of that remote era, but amid the ruin I did find something or rather I found some things: one hundred and 45 little blackboards; blackboards used then and subsequently by the junior grades; chalkboards as held in the lap of the middle kid in the front row for the annual class photograph.

These tableaux noir - not quite black, not quite blank – are for me, a mute correspondence with the past. I imagine that they might be encoded with poignant fragments of history but it is more likely that in gathering them up – over three days – that I was merely taking possession of 145 variations of nothing.

But there is nothing that is merely nothing.

For me they isolate an aspect of beauty, in their minimalism, their obscurity, their variation and the sheer circumstance of their survival. They also seem to me to be both intimate and authentic. What is apparent to me is that the residue and fugitive markings on the majority of the boards seems familiar, similar to the lyrical calligraphies, violations and the smokey blur that I use to define and obscure my more conventional drawings”.6

Bradbeer has investigated the body as a manifestation of the human condition now for thirty years. As a young artist he employed photographic methods for self-portraiture. He experimented with light during the photographic process long before digital imaging was widely used. Black and white photography was a key factor in establishing Bradbeer’s understanding of the effects of light on the body. His early X-ray vision works, which resembled CAT scans were the result of an almost scientific approach to the body, a modern version of anatomical dissections prompted in the aftermath of surviving fractures to the neck in a falling accident in his youth: “The drawings are literally developed from the skeleton up, in a ritualized excavation. He marks out drawing sites to identify a quiet place ruffled, a stone disturbed, sods of earth turned over uneasily. Wrappers of skin and flesh are lifted, the flesh taking on a watery transparency to reveal the bones beneath. The purpose in this, as in Aboriginal X-ray drawings, is to show the viewer a deeper reality than surface appearance: to cut through what exists within and makes up all that is the human entity”.7

Bradbeer’s approach to making large-scale drawings of the human figure requires considerable confidence and yet he is mindful of the fact that image -making is a process involving a succession of errors. For an artist to locate nobility in the human figure, particularly the male figure, any time since the mid-19th-century, when it evidently fell from grace, has been difficult enough, but in recent years this has required a leap of faith, for the human figure Bradbeer observed had, “now fallen off the stage”. Identifying with classical structures for art in which the human form is central, Bradbeer uses a range of technical and conceptual ideas to make images that have a resonance in today’s world, dominated by mass media. Mass media, he observes, has both ennobled and debased the human form.

A preoccupation with transcendence is central to his work with the figure, where the human body becomes a metaphor for an absolute. The stillness of Godwin Bradbeer’s vast, charcoal drawings appears to be in contrast to the speed and momentum of the present day. His work runs against the trend – from the advent of photography and through the multifarious and dominant art movements to the present day - where manual skill and the investigation of the human form, have been devalued. The actual process of image making on a rectangular surface becomes rather like a chess game – an enclosed space with limited moves, “but the temptation is to find the limitless within it. It’s somewhat like a dance on a small dance floor.. the desire to find that it’s alive and that it’s an articulate form, that it can be a joy to perform with it, and that one can be expressed within that claustrophobic space.”8

As Godwin Bradbeer’s work reveals drawing in contemporary art practice operates on several levels simultaneously. Conceptual drawing has a close affinity to writing, and is a subtle and precise means through which every drama or the subtlest of thought can be recorded. Imperfection can be testament to the process of thought and action in the creative act. Intellectual rigour is at the heart of Bradbeer’s work, poetry is now an important form of expression which inhabits a close parallel to the visual images. Hidden structures are thus revealed, the unknown illuminated giving a rare insight into human vulnerability in physical, emotional and spiritual terms. All these major drawings are made with a base of dense indelible white that is covered in layers of muted colour and black that is subsequently excavated and cleaned to describe a luminous physiology. Bradbeer’s large drawings attract attention to layers of experience, sexual, spiritual through the wonderment he creates in images of the body. His renderings elevate personal motivations and longings into a quest with timeless and universal appeal. 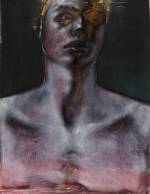 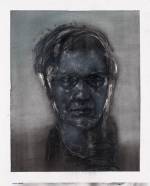 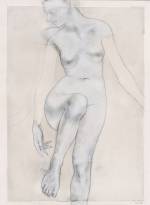 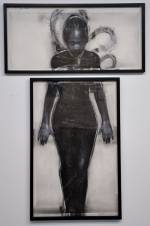