Sound and vision collide in Verdier’s work, with this latest show exploring the physical, emotional and aesthetic landscape of Mozart arias 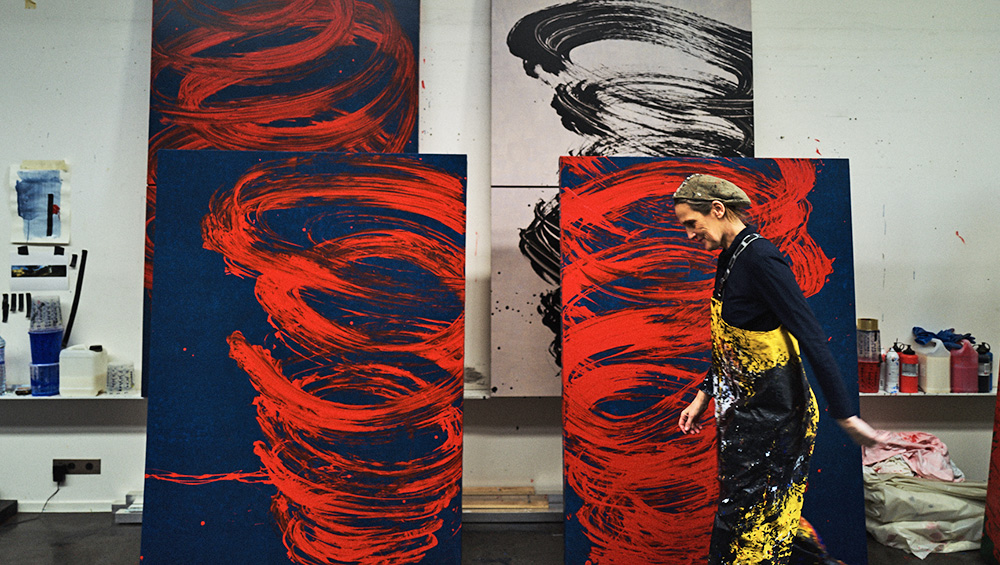 In 2014, Fabienne Verdier (b1962, Paris) was invited to be the first artist in residence at the Juilliard School of performing art in New York, an experience that resulted in a new wave of work for this celebrated French artist, articulating aspects of the physical, aesthetic and emotional experience of sound and vision as they intersect. Vortex, at Waddington Custot, London, is the second iteration of this oeuvre (the first was Rhythms and Reflections in 2016/17) and represents a new series inspired by specific Mozart arias. 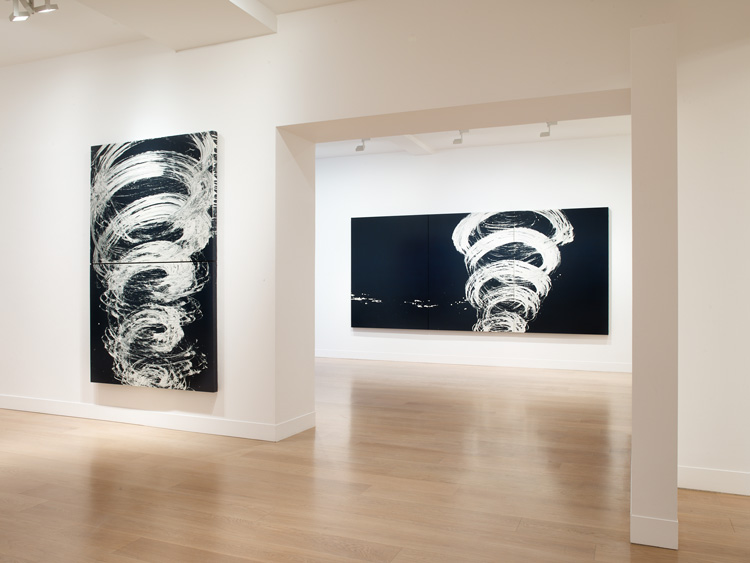 I am a huge fan of Verdier’s work, as well as her sensibility, having been lucky enough to see her major retrospective across three sites in Aix-en-Provence last year. In early adulthood, Verdier mastered and then rejected the training of the École des Beaux-Arts in Toulouse and spent 10 years in China learning classical art and calligraphy from master Huang Yuan. This 2019 show was an exhilarating exposition of her resulting fusion of eastern contemplation, dedication to the moment, and freedom of line, along with a western feeling for the power of abstract form and expression. Across the three decades of often super-scaled paintings on show in Provence, the most exciting moments, for me, were when her lines appeared singly, as circles, verticals or dynamic squiggles, exuding a sense of having been projected or jettisoned on to the boards by vital, elemental forces, captured by her body and brushwork. Often inspired by landscapes, mountains and streams, the works transcended their source material: here was power, mystery and vitality in abundance. 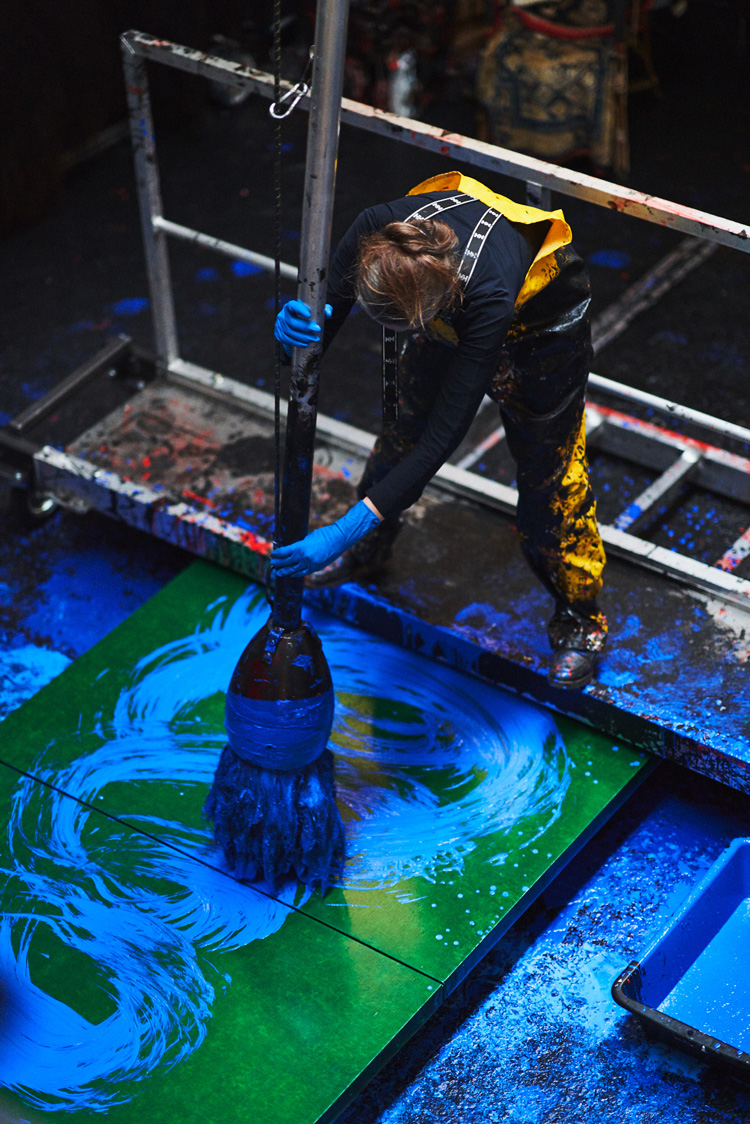 The power is here in this new London show. In a film made for this exhibition, screened in a side room, she talks about the “centrifugal” force she captured for this series, thanks to the contraption she has devised in her home studio: her giant horsehair paintbrushes float freely from a movable frame, steered by her hands via a set of bicycle handlebars attached to the brush. Through channelling her instincts and movement via hands and body on the brush, she found “collisions and coincidences” with the form and energy of the music in question; a kind of dance with the elements of music and space; an earthly “music of the spheres”.

The form of the Vortex in the show’s title first took shape during masterclasses she attended with Juilliard’s voice coach, Edith Wiens. Through close attention to the teachers’ instructions regarding the singers’ breath and delivery – particularly the idea that the breath should be expelled upwards in a controlled flow – she says: “I realised at which point human beings are at the centre of their song, in the middle of a kind of whirlwind made up of vibrations, of other sounds. And I was really touched by this notion of an energy flow of breath. This idea that the human voice expresses the poetic energy of the world around us.”

While each work emanates from her meditations on a specific aria, the vortices presented here were further honed through research in her studio, in Le Vexin, 30 miles north of Paris, over this summer. Unusually for Verdier, she has added and amended some of the resulting shapes – previously the figures or gestures in her work have been things of spontaneity, of gravity and choreographed momentum frozen in ink or paint, although the background is often layered and lacquered for maximum intensity of colour. In the film, she is seen scraping away lines of paint with the corner of what looks like a steel wool pot scourer. She has also added synchronous lines to the brushwork, so the whirls and crescendos she has displayed across Waddington Custot’s white-walled gallery are more deliberated and constructed than before, more sculpted.

What I question here, however, is the way in which the vortex shapes are sometimes framed - cropped close, or so up close that they interrupt or constrict that crucial sense of movement mid-pirouette. As I hear the graceful strains of the Mozart arias that inspired Verdier leaking through the space from the small screening room, I find myself transported by the sense of upward lift and exhilaration that the pure, luminous soprano’s voice generates, while being brought up short because I am only seeing one cross-section of its corresponding visual expression. Perhaps these frames and representations needed to be expanded, not cropped – although that would have posed obvious problems in this compact, central London gallery.

For me, the works that convey the spirit of these songs most gracefully are the two, three-panelled white-on-midnight-blue works, La Reine de la Nuit (II) and (III) (2020), where the white whorls of paint on the right – and the trail of pigment that tiptoes from the left-hand edge of the frame - seem to capture the beginning and end of a perfect phrase, from its bubbling up to its full-volume expiration, somehow expressing sound as both light and architecture.

I also wonder at the necessity of the app that is offered for our use within the gallery, to allow us to listen to the specific arias as we stare at the work they inspired. It raises the question: if the thing that inspired an artwork needs to be present while you view it, then surely that artwork is failing to articulate itself fully? Or perhaps it is just a form of multisensory enrichment. Either way, it dilutes something of the mystery of the vortices; they become a structure to imaginatively inhabit while experiencing something else. It could be a pathway to a more immersive experience, but does not quite get there.

I am drawn to revisit a conversation Verdier had with Studio International’s Anna McNay in 2016. She said: “Even if ‘painting is a mental exercise’, as Leonardo da Vinci said, the battle of the painter is to refuse mental habits, the mental reflexes that he has built up during his working life. It is the hardest thing imaginable. And if you have talent, then the danger is even greater. It is amazingly difficult not to surf on it. You have to be very careful. Beyond virtuosity, what is there? To get there means constantly questioning one(my)self, every morning in the studio. It means being capable of a receptiveness that is almost cold, that allows you to open yourself to the unknown and unexpected, to anything that comes along.” Maybe the limitations I sense from these works emanate from her being in awe of the music, or attached to the need to dialogue with it, or attached to a singular form with which she feels she has captured it already, rather than free herself and articulate something more elemental altogether.