This compact and beautifully illustrated book concentrates on the essential aspects of the Art Deco movement with a certain sophistication and clarity - uncovering the main influences of an innovative style that oozed glamour and beauty. The author Ghislaine Wood worked on the Victoria and Albert Museum's brilliant Art Deco 1910-1939 and contributed scholarly essays to the large and comprehensive catalogue that accompanied the show.

Art Deco was the style of an era of extremes; it spread throughout the world in the 1920s and 1930s charting a time of fantastic wealth and subsequent economic depression. As author Ghislaine Wood writes, ‘Spanning the boom of the roaring twenties and the bust of the Depression-ridden thirties, (Art Deco) came to represent many things to many people. It was the style of the flapper girl and the factories of Fordism, the luxury ocean liner and the skyscraper, the fantasy world of Hollywood and the real world of the Harlem Renaissance’.1

Here was a global movement responsible for altering the skylines of cities from Rio to Shanghai. While embracing tradition in many ways, Art Deco also celebrated a new and very modern world. All forms of design were effected - from clothing to interiors - and society in general was subsequently influenced. Art Deco is perhaps best known for its contradictions and eclectic nature - along with its fabulous celebration of luxury and glamour.

The movement that shaped the 20th century continues to intrigue and fascinate people today - as was made obvious by the Art Deco exhibition at the Victoria and Albert Museum, which opened in early Spring 2003, in conjunction with the launch of this book, and proved hugely popular.

Essential Art Deco explores the iconography of Art Deco with particular emphasis on six particular influences - traditional motifs, stylised nature, the exotic, geometry and abstraction, the city and the machine, and streamlining. All the sections are beautifully illustrated, with images ranging from an exquisite pink cloche hat to a fabulous white car - perhaps the most enjoyable part of reading this book. Each example is explained against a background of information concerning its specific influences and style. The theme of the relationship between Art Deco, the machine and the city was explored by the V&A's exhibition. It was also studied in the main catalogue, an exemplary piece of scholarship.

Essential Art Deco's strength is that it is small publication, designed as an introduction to the subject, yet the ideas are not dumbed down. Wood writes succinctly on her subject, ‘From the real skyscrapers of New York to the fantasy skylines of the German Expressionist film, Metropolis (1926), the city became one of the most resonant symbols of modernity. Innumerable films of the 1920s and 1930s used the city to denote a modern world with new values and lifestyles. Artists explored the infrastructure of the city, its transport systems, roads and bridges, to symbolise an increasingly mechanised and frenetic environment, while the skyscraper became the most evocative icon of the modern age. Art Deco designers plundered this imagery in search of a meaningful modern iconography’.2

This book is an excellent introduction to the subject of Art Deco and particularly suitable for students. 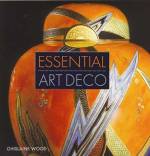