Three monumental sculptures of corten steel and granite, made in the closing years of Spanish artist Eduardo Chillida’s life, are now on show in Britain for the first time 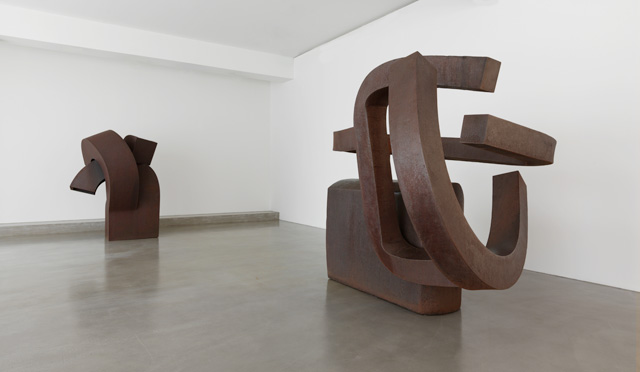 At Ordovas in Savile Row, London, is a trio of large late sculptures by Eduardo Chillida (1924-2002), two in corten steel, one in granite. A more extensive version of the current exhibition was shown last year in what the gallery describe as a “pop-up” space on Madison Avenue. Chillida has been a consistent part of the Ordovas programme since its opening in 2012. This is the Basque artist’s second solo exhibition with the gallery in London, where he has also appeared alongside his predecessors Julio González, Joan Miró and David Smith and contemporary Anthony Caro. 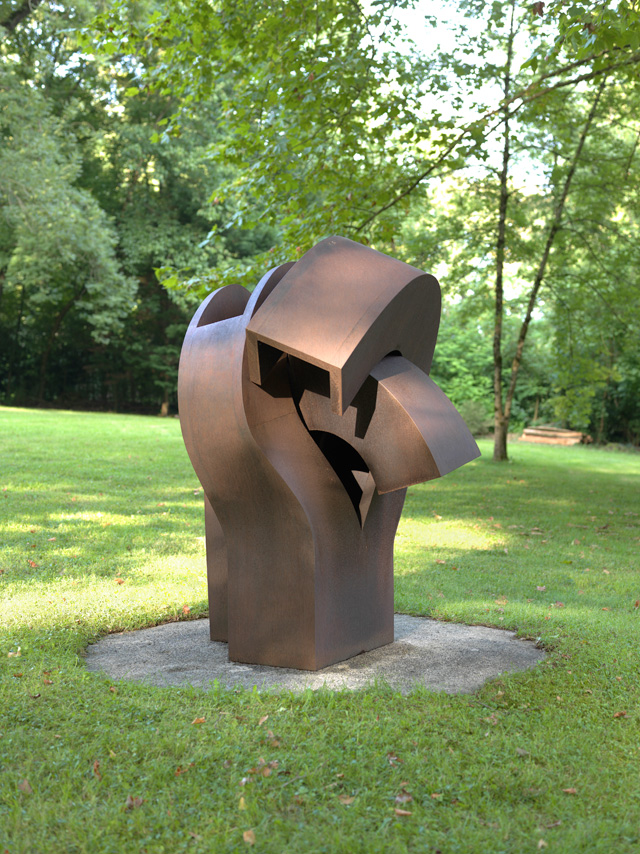 Although born in the same year, and latterly his friend, Chillida belongs to an older strain of modernism than Caro. Perhaps this is because the essentials of his art were established in the 50s rather than the 60s; or related to his avoidance of synthetic materials or artificial colour. The importance of craft to Chillida is part of a more fundamental difference. His first iron sculptures were created under the guidance of blacksmiths in his home town of San Sebastián. Directly involved in the making of all his sculptures until the end of his career, the influence of a craft tradition can still be felt here, in sculptures from the half decade before his death. Caro detached himself from the process of construction, moving quickly and attempting an unbounded inventiveness. Chillida gradually evolved a limited set of overlapping or interlocking motifs, dependent for their success on a felt relation to his material. 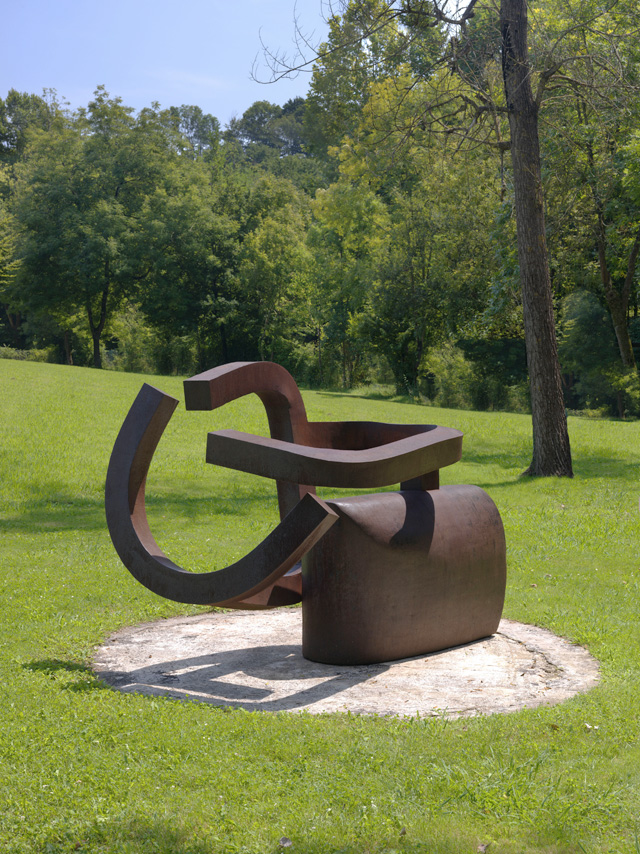 Where Caro was at his most coherent when his sculptures aimed at an instantaneous present, Chillida explored a very different sense of time. His sculptures imply long duration. Here, the monumental is neither a question of size, nor just a matter of austere conception and grand or imposing scale; rather, it is a statement of endurance, an attempt to stand outside time. I think this central aspect of the sculptures survives the irony of seeing them in a temporary exhibition in a West End showroom, knowing that they have been expensively shipped across the Atlantic fresh from a New York pop-up. Perhaps in a strange way the sculptures are based on this irony, or at least a generalised and all-pervasive version of it. Did Chillida’s desire for structures that suggest a removal from circumstance originate as a reaction to a faster spinning and more complex world? And does our increasing acceleration and fragmentation – of which the acceleration and fragmentation of the artworld is only a small part – make them ever more poignant? Modernism can respond to this question because it did not always face forwards, or at least did not always do so unambiguously. 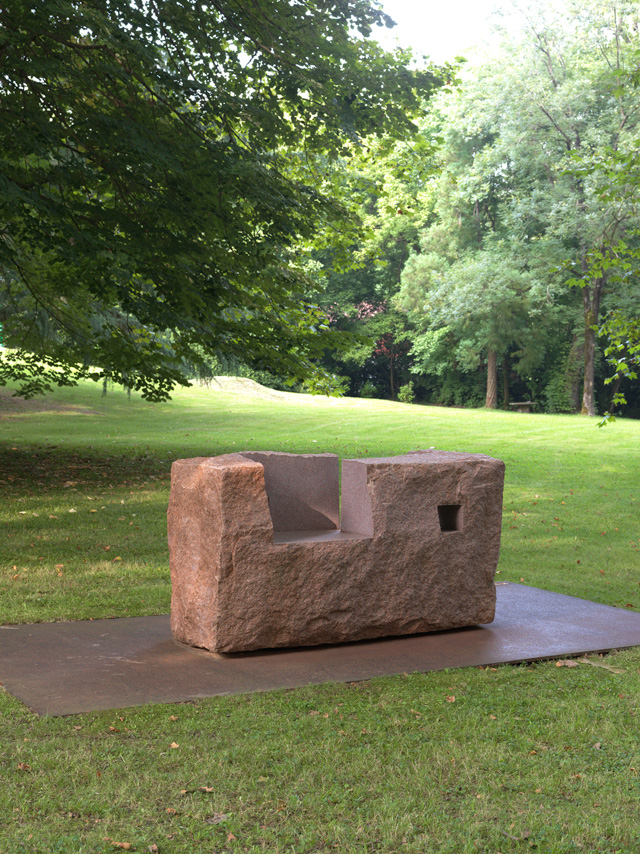 Chillida worked in both drawing and sculpture and in materials ranging from alabaster, marble and granite to steel and iron. Despite this variety, at his best he achieved a rich and subtle concordance between material and motif: only in less successful works does the latter feel imposed on the former; and then ponderousness or an over-easy slickness can creep in (Elogio del Vacío VI, 2000 belongs in this category). But in a strong Chillida, structure seems to emerge naturally – or at least somehow inevitably, with a measured persistence – out of its lump of stone or metal; or structure and matter appear clarified, poised together, as if each were acting as the container for the other. The artist himself is not part of the equation and the sculptures do not register a struggle with materials nor stage a mastery of them, either of the virtuoso maker or the all-seeing creative intelligence.

After the exhibition, I saw a beautiful cast-iron door-knocker in the window of Sam Fogg on the corner of Clifford Street and Cork Street. It was made in Spain in the 15th or 16th century, in the shape of a lizard. An archetypical craft object, it pleasingly teased out, with all the intimacy of the deftly handmade, a likeness – lizard – and a functional object – door-knocker. The twirled tail reminded me a little of the grasping hair-fingers-tendrils of Chillida’s Peine del Viento XIX, 1999, which I had just seen at Ordovas. Yet the difference between the two was much more than one of size. The pleasure of the door-knocker lies in its familiarity, in the way use and readily comprehensible representation neatly coincide, without one unsettling the other. Chillida’s purposes are much more open-ended, much less willing to give up their message. The self-effacing and pragmatic aspects of his attitude to making act in concert with the abstract part of his art. Both ensure that the motion of the hair-fingers-tendrils of Peine del Viento is never fully explained. The clunkiness of the base (I’m sure Chillida employed this motif to greater effect elsewhere) only detracts a little from the powerful sense of a gradually, but inexorably, emerging enigma.

I found the large granite sculpture Lo profundo es el aire XVIII, 1998, the most moving in the exhibition, the one where material and motif meet most completely. It is a three-dimensional image of an ideal architectural space, an astringent mental refuge. In the bustle of the West End, Lo profundo es el aire XVIII remained with me, an echo of the streets I was walking through, though one cleansed of activity or even the possibility of action. The defensive aspect of this cleansing – and perhaps some of its disquiet – are figured by the contrast between the pristine polish of the sculpture’s interior and its roughly hewn skin. The implication is that the inner reality of the granite – the substance that allows the possibility of preserving an ideal architecture – is pure and untouchable but that, on coming into contact with the world, it is sullied or coarsened. A series of apertures, which connect to the central corridor but without clearly leading in or out, also create an impression of an unbridgeable distance. Yet Chillida is too subtle to make the contrast between rough unworked exterior and ordered geometric interior too stark. The whole block leans slightly forward, distinguishing the sculpture’s back and front. An overhang, larger towards the front, casts a shadow on the floor and creates the illusion that its bulk is floating.