Diao presents us with 13 new sumptuous paintings, all of which were inspired by the deconstructed parts of Gerrit Rietveld’s Berlin Chair 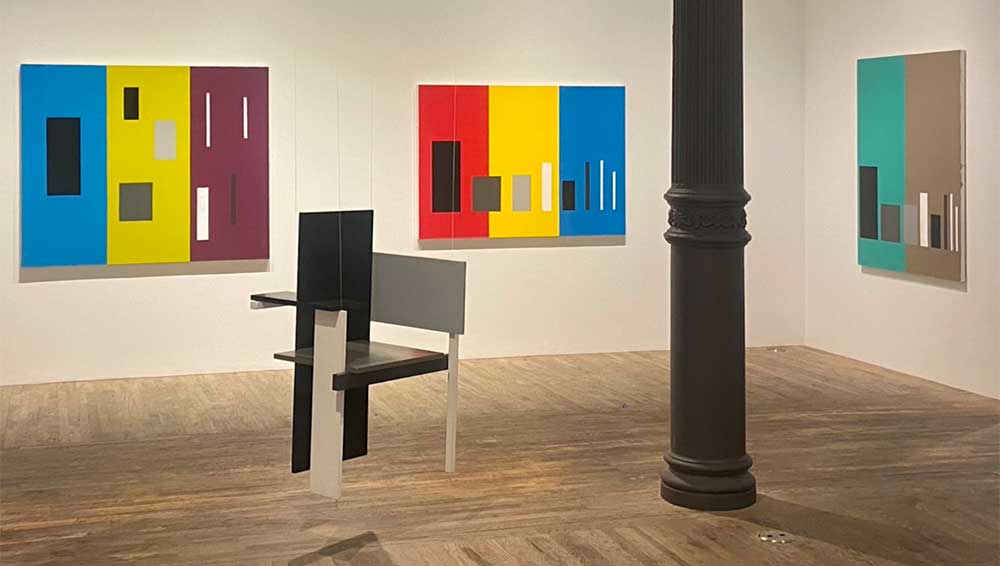 A wood chair in greyscale suspended from the ceiling rests approximately a foot above the floor of the gallery. It is Gerrit Rietveld’s Berlin Chair (1923), the show’s focal point and genius loci, a relative of the De Stijl designer and architect’s more famous primary-coloured model, a modernist icon made in 1918. The Berlin Chair (it has a twin that is a mirror image) consists of eight rectangular planks in grey, black and white, the installation – to be looked at but not sat on – foregrounding its designation here as an art object over its functional role (although anyone who has ever plonked themselves down in one might question how functional it actually is). 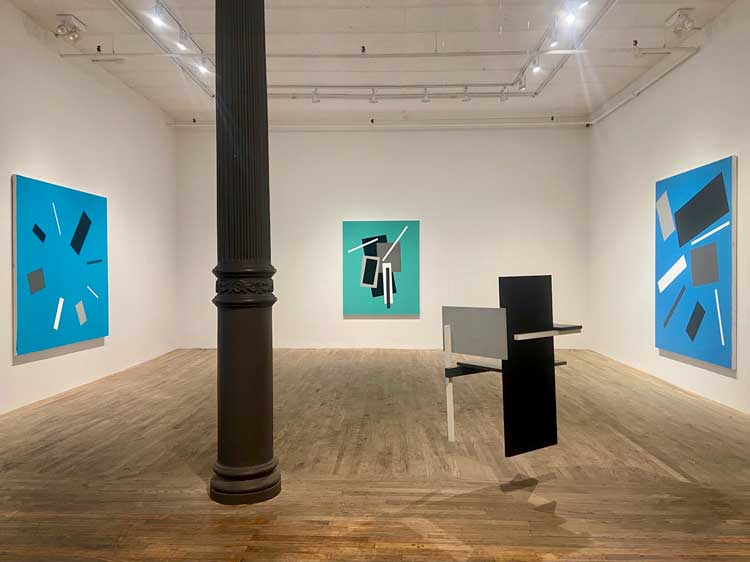 As a motif, however, and in New York artist David Diao’s treatment of it, the Rietveld chair very satisfyingly threads this show together, its deconstructed parts providing the impetus for all 13 paintings on view. They are also surprisingly sumptuous, given the purposeful austerity of their source. Diao, doing what he is known for, encrypts into the series twisty references to the history of modernism, from Russian constructivism and its slogans vehemently promoting art into life and politics to self-reflexive abstraction to postmodernism and beyond. He also said that if you are not told, you can see them simply as hard-edged abstractions, keeping his and the viewers’ options open.

Diao came of age in the 1970s and has around six decades of artmaking to his credit, weighing in with large painterly abstractions in the early years of his career. Soon, however, he pivoted to more conceptual works that wrestled with formalist issues, reflecting the often heated partisan exchanges of the period. Diao, however, had his own take on all of this, his perspective more personal, presciently so. His shows were often thematically connected, the elegant, meticulously considered installations slyly, smartly cultivating a persona that might be designated auto-fiction today, auto-narratives. Diao’s projects teeter between fact and fiction, critiquing prevailing points of view, his wit dry, unafraid to point out the elephants in the room. While part of his practice deals with aesthetic concerns, another part is anchored in the realities of (his) life as a Chinese American artist, long before diversity, equity and inclusion became (more or less) normalised, when artists of colour were relatively few in number and fewer yet in visibility. Diao said that, since at least 1985, he has questioned the idea that abstraction should be, or even could be, wholly non-referential. His works have always had a back story, even if not always immediately evident, from floor plans of his family’s demolished estate in China, charts of his yearly earnings, to a faux Museum of Modern Art invitation announcing his equally faux exhibition at the fabled New York museum, known at the time as a bastion for white male artists. 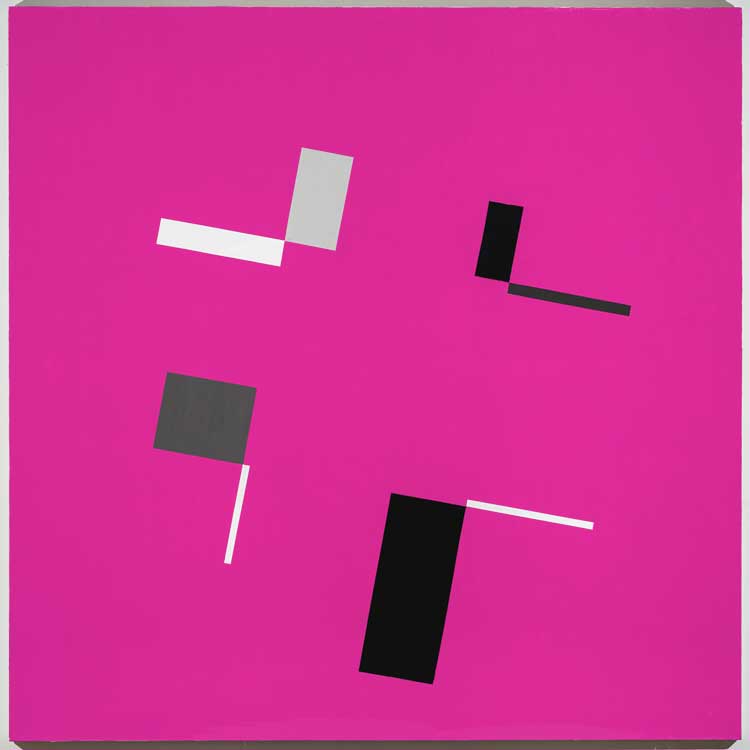 Berlin Chair in Pieces, with all the paintings from 2021, is his 14th show at Postmasters, the striking compositions permutations of the eight different rectangles that constitute the Rietveld chair. The titles, in deliberate accordance with modernist formulation, are mainly descriptive: Rietveld’s Berlin Chair, parts actual scale in a pile, Teal; or Rietveld’s Berlin Chair, parts describing a square, Magenta. Diao, however, cannily transforms an object that was itself based on prescriptions for painting back into a painting, ones with more expansive readings.

The appropriated rectangles are true to scale and colour, set variously against a series of fields that are monochromatic, then divided into vertical, horizontal sections, quadrants, or a chequerboard pattern, their complexity progressively increasing with each painting.  One has a blue-and-yellow patterned ground that the artist based on the similarly configured chequered sliding partitions of the famed Katsura Imperial Villa in Kyoto, joining two cultures, two historical periods, two interpretations of abstraction, and more, Diao’s bag of references infinitely capacious. I also see a nod to the flags in car races in the chequerboard design, conjuring thoughts of speed and danger, but perhaps that is because Diao explained that the image of another painting on view here, Rietveld Drives BMW, replicated the BMW logo unintentionally, surprising him. 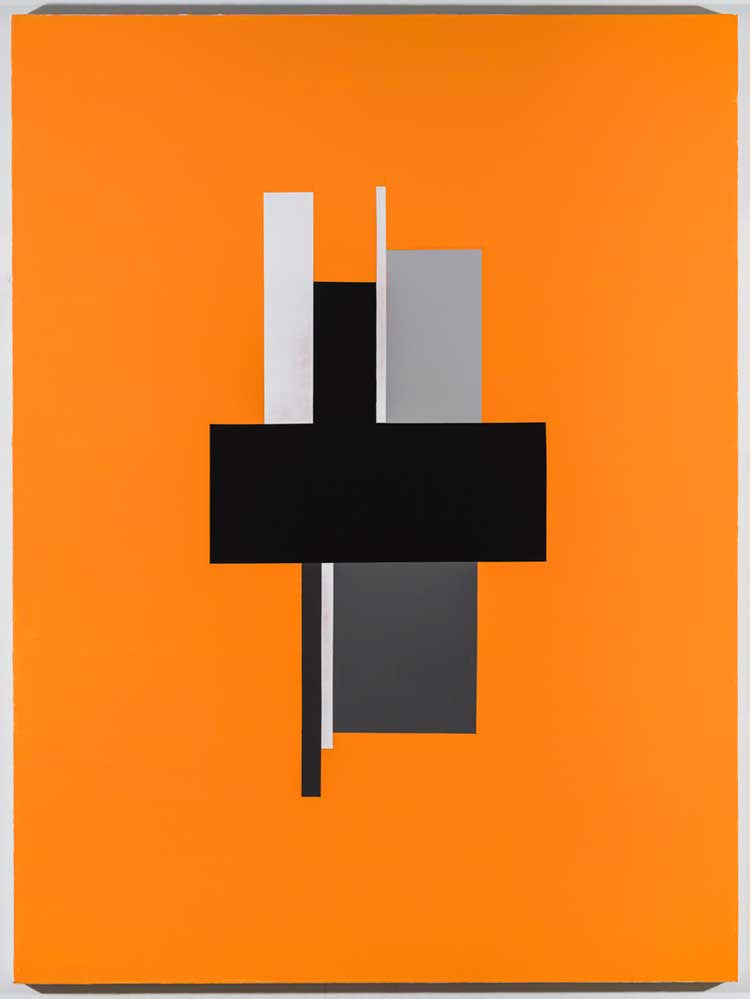 However, it is Rietveld’s Berlin Chair parts on red, yellow, blue, that is arguably the show’s summary and springboard. It reminds us not only of the designer’s red/blue/yellow chair, but also of the significance of primaries for modernism and Aleksandr Rodchenko’s red, yellow, and blue monochromes from 1921. Rodchenko proclaimed that they were the last paintings that needed to be painted, that it was now “all over”. But painting, as we have seen, and as Diao (and countless others) mischievously, marvellously continues to show us, is thriving.

One of his most rewarding exhibitions to date, it is masterfully balanced between concept and object. Nonetheless, it is the paintings that are the stars, the paint silken, the colours rich, the palette adventurous. Diao never forgets to make his work easy on the eyes and here, it is exceptionally alluring. 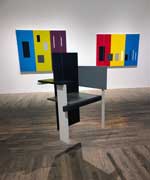