The American painter’s first London show unleashes a gallery of grotesques that are equal parts horrifying, laughable and strangely sympathetic 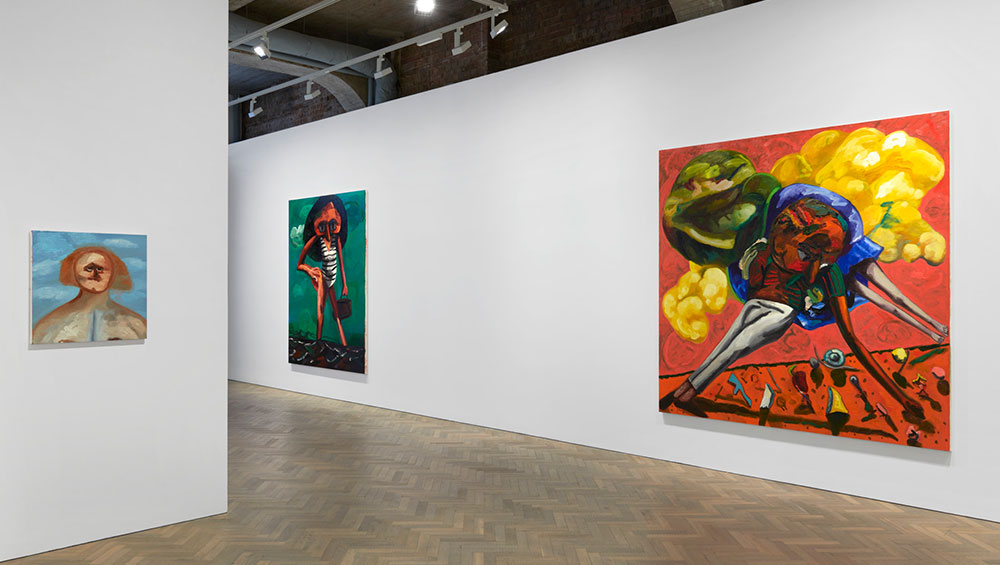 What horrors still lurk in the imagination of Dana Schutz (b1976). On the evidence of Shadow of a Cloud Moving Slowly – an exhibition of new work that stretches across both St James’s premises of Thomas Dane Gallery – it might be best if we never find out. In Blind Search Party (2020), a band of gurning grotesques careen through the darkness, limbs akimbo, groping blindly. Lumberjacks (2020) has a pair of Gustonoid figures squaring off to fight, presided over by a cyclopean king squatting atop a broken-backed Boschian peasant. One sorry creature has a new face clumsily stitched on; another sighs as he wearily strikes himself with a cudgel. Schutz’s fundament-smeared clowns remind me of Samuel Beckett’s characters, striving against a hostile world. And as with Beckett, there’s a glint – just a glint – of revitalising hope amidt the trudge. 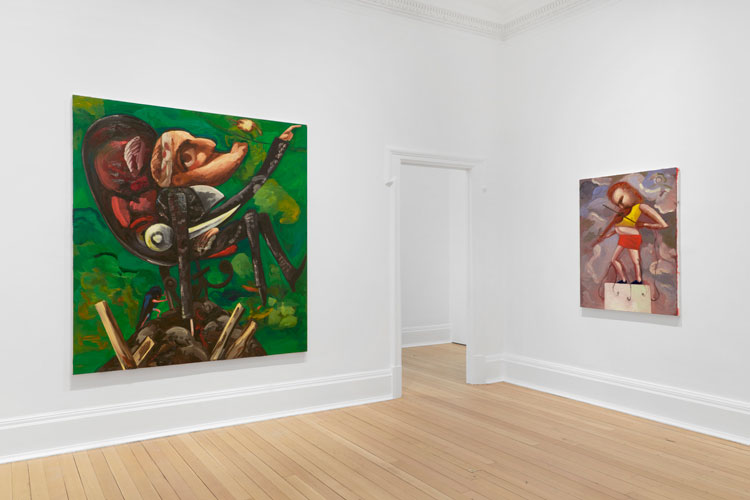 Since emerging at the turn of the millennium, the Brooklyn-based Schutz has unleashed a parade of imaginary fiends, which at once express humanity at its most debased and most parabolic. Her debut solo exhibition, 2002’s Frank from Observation, imagined the last man on Earth as a hot-pink nude and scrunch-faced proboscis monkey. She has since caught sneezes as torrents of gunk and created an alarming cast of auto-cannibals, devouring their own bodies with alarming ingenuity. “Again and again,” wrote Karen Rosenberg of the New York Times, in 2011: “Ms Schutz has challenged herself to come up with a subject that’s too awkward, gross, impractical or invisible to paint. But she has yet to find one that stumps her.” 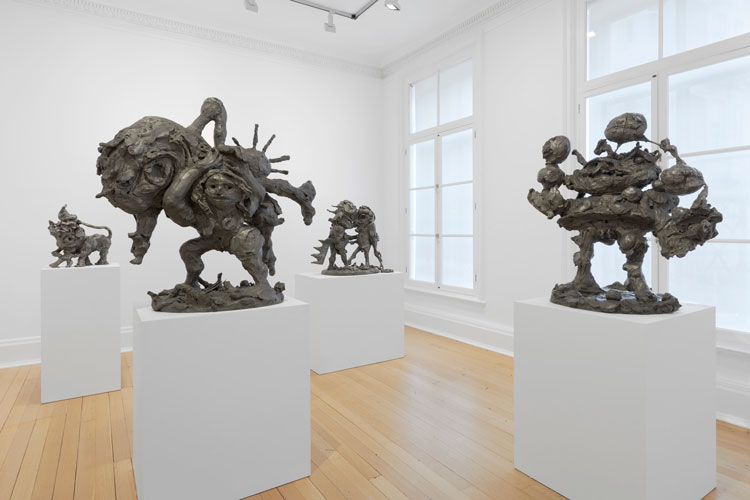 Six years later, something worse than a stumping happened. Schutz’s painting Open Casket (2016), which portrayed the mutilated body of teenage lynching victim Emmett Till, was exhibited at the 2017 Whitney Biennial. It quickly triggered a fervid debate over the rights of representation. Should a white artist depict – and potentially profit from – an image of black suffering? The furore could have cast a longstanding pall over Schutz’s career. But when she returned to New York’s Petzel Gallery with a suite of new work last January, it was with an enhanced formal complexity, a new crypticness and a more ambivalent relationship between sympathy and repulsion. 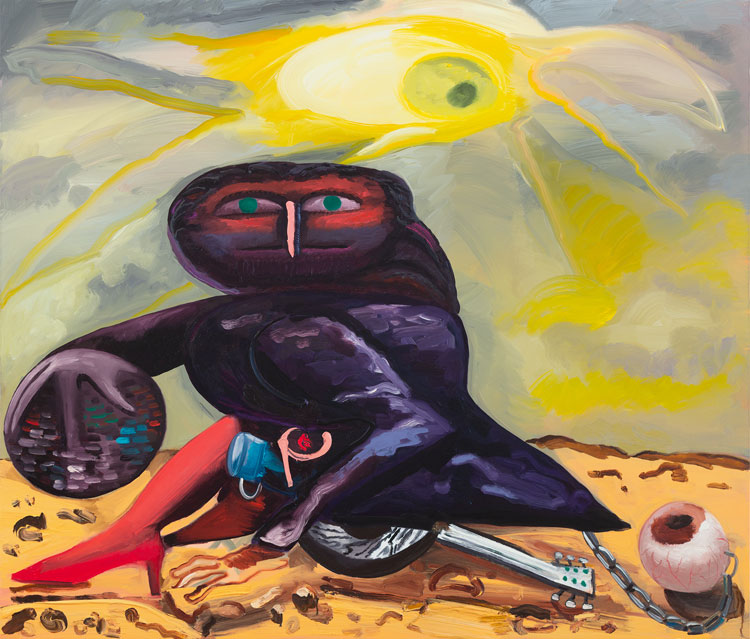 The 12 paintings in London continue this forward advance. In the largest pieces, the chaos of the scenes themselves are etched by the high drama of her brushwork. It can sometimes seem as if a second abstract image exists in Schutz’s frenetic movements of paint, which encourage you to follow them as if painting in reverse. These strokes can, on a single canvas, range from a slick thinness to a protruding impasto. The nose of the human-bird hybrid at the centre of Everything and Nothing (2020), for instance, leaps about a centimetre atop the canvas. 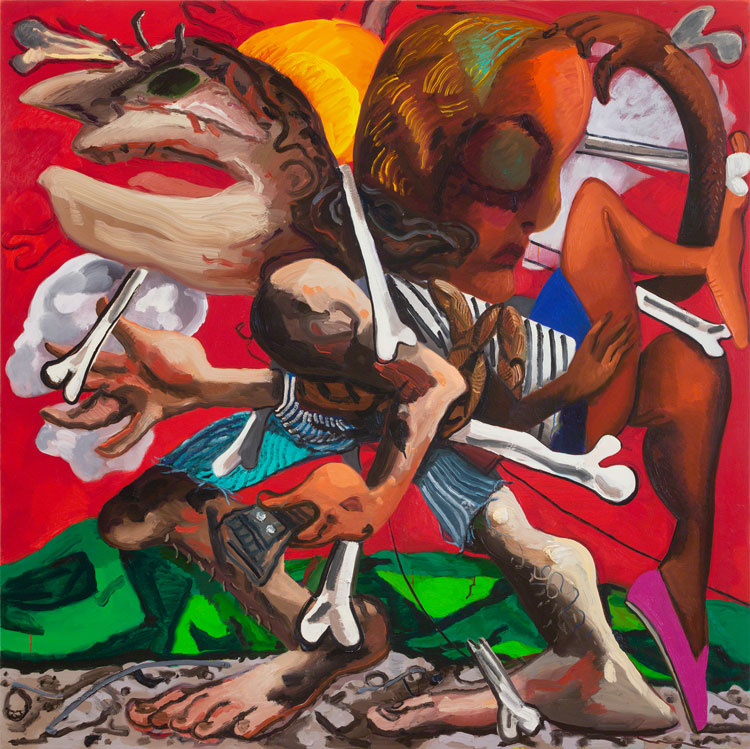 Some of the most exciting paintings here sport gleefully between styles. Bound (2019) mixes Picasso-esque black outlines, faux naive zebra striping, a lurid red background and subtle flecks of colour, as if the painting has been collaged from different elements. Unity is imparted by the narrative force of the scene, as one unfortunate is about to be carried off by another. Often Schutz metabolises a banquet of art history in a single work. Take the enormous Boat Group (2020), in which a troupe of uglies cross the sea. One’s thoughts might run to Théodore Géricault’s Raft of the Medusa (1818-9), art history’s most spectacular depiction of a doomed voyage; Eugène Delacroix’s Barque of Dante (1820) looms. The hideous figures hark back once more to Philip Guston, to the visage of Henry Fuseli’s Nightmare (1781) and to James Ensor’s masked revellers, while the overall composition – globules of colour bursting out of a bowl-shaped vessel – visually echoes a 17th-century still life.

This squirming mass of precedents never seems to undermine the distinctiveness of Schutz’s own vision, but instead throws down the gauntlet to the past, with both respect and ridicule. Works such as Everything and Nothing and The Idiot (2020) spar with and deflate symbolism. Is the orb that the figure grips in her hand a mystical divination tool or a disco ball? There is also an echo of interwar surrealism, particularly the craggy, chimeric creatures dreamed up by Max Ernst. Perhaps the best phrase to capture Schutz’s style is grotesque realism, as described by the Russian literary critic Mikhail Bakhtin, in lowering “all that is high, spiritual, ideal, abstract … to the sphere of the earth and body”. Lofty art becomes dunked in dirt and excrescence – and comes out all the more alive for it. 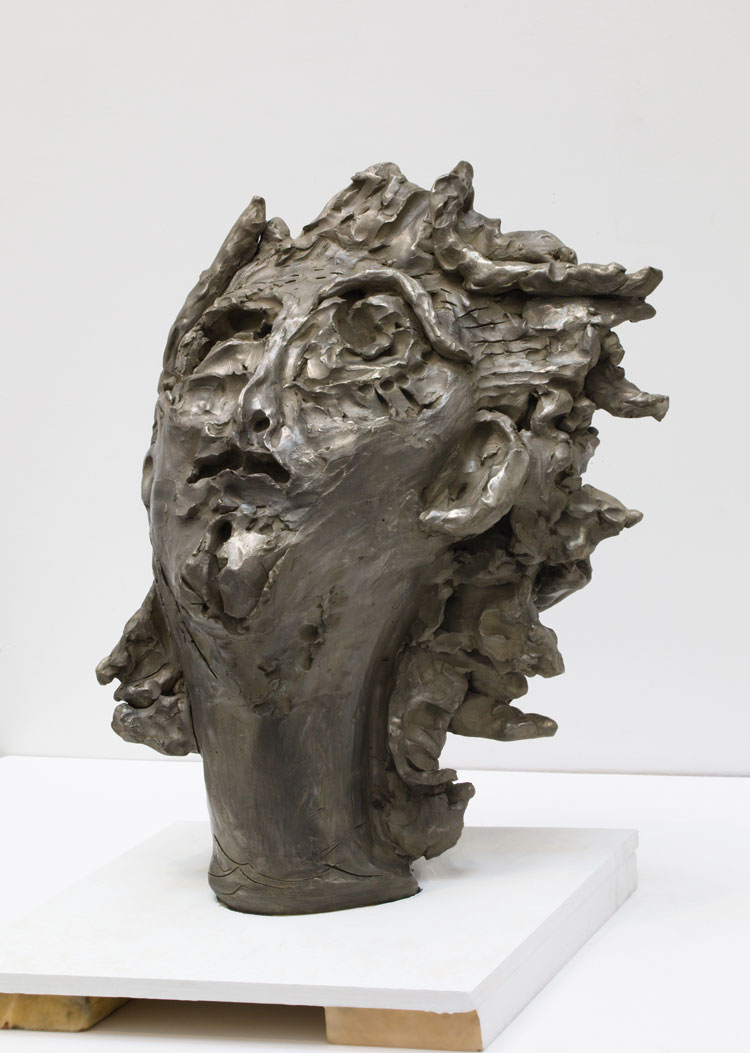 Since her 2019 return, Schutz has begun to work in sculpture, creating models in clay that are then cast in bronze. Six of these are present at Thomas Dane Gallery, and they succeed in transferring the churning texts of her paintings into a new medium. Some serve as models: Adversaries (2019) depicts the same feuding duo as Lumberjacks (2020), and the owl-faced character in Everything and Nothing has a progenitor in Atlas (2019). While the paintings dazzle with lurid colouration, Schutz’s bronze has a matt muddiness, with the sheen of the material almost all ebbed away. Sometimes melding into circular bases, they look a little like miniature war-game figurines that have melted in the sun. A Juggler (2019) has begun to fuse with his balls, while a Sailor’s (2019) agog face seems on the verge of becoming putty.

Of all the strands of western art, sculpture is that most often used to shut down interpretation. A classically inspired bust of a heroic general does not problematise its subject, in the same way that a great monarchical portrait might question its model’s majesty. Schutz’s statues naturally reverse this trend, instilling sculpture with ambiguity. Are the two Adversaries about to fight or attempting reconciliation? Is the Lion (2019) biting the head off its human companion, or giving in to its embrace? Here, as in her paintings, Schutz leaves us hanging: should we scream, laugh or cry? The answer is all three.