The Cy Twombly exhibition appropriately shown at Inverleith House 'the most ideal gallery in Britain',1 closed at the end of October. It was an Edinburgh International Festival exhibition and followed Ed Ruscha, 2001 and Lawrence Weiner (2000). It was Twombly's first solo exhibition in Scotland.

The exhibition was a survey of 50 years of Twombly's career in the different media he has explored: sculptures in bronze and plaster-covered wood, works on paper and photographs. In the context of Inverleith House, emphasis was on works-based botanical subjects and natural forms, interpretations of flowers and gardens and landscapes.

The show displays Twombly's undoubted talent and originality. The works are confident and beautiful. The obvious question is, 'Why is he not as famous as Robert Rauschenberg or Jasper Johns?' Twombly's career is an interesting one. His early success was assured. Born in 1928, in Virginia, Cy Twombly was involved in the Black Mountain College art-collective in North Carolina. The experiment there was the brainchild of composer John Cage and was inspired by Marcel Duchamp and Zen. Twombly was greatly influenced by Robert Motherwell and Franz Kline. Instead of staying in America and benefiting from the climate there, which supported abstract expressionist art, Twombly travelled with Rauschenberg to Africa and Rome on a US Government grant. In his application he stated: 'What I'm trying to establish is that modern art isn't dislocated, but something with roots, tradition, and continuity. For myself, the past is the source … I'm drawn to the primitive'.

Had Twombly stayed on in the USA, he would have achieved the same degree of critical attention as his contemporaries. Instead, Twombly divided his time between New York and Rome. He found inspiration in classical mythology, poetry and Italian frescoes. He increasingly worked in metaphorical and allegorical styles. He also made sculptures: delicate whitewashed arrangements of wood and plaster; the faded frescoes inspired Twombly's chalky marks on large canvases. His success was European rather than American, although he exhibited with Leo Castelli from 1964. His big career successes were in Amsterdam, Basle, Brussels and Munich. He has lived in Italy since 1957.

'Cy Twombly doesn't fit neatly into art history. He is of the generation that followed hard on the heels of the abstract expressionists, but his work doesn't dovetail neatly with contemporaries Jasper Johns and Robert Rauschenberg. He makes work that is literally post-modernist, and that engages with post-modernism, referencing (pre-modern) literature and myth, using street graffiti to define his own cryptic calligraphic language.'2

Twombly is perhaps the most intellectual of the survivors of the New York School. He was unwilling in the fifties to abandon his ideas about expressionism. His friends, on the other hand, acquired celebrity status for their work with found objects and pop art. Twombly found himself out of synch with the new cultural preoccupations. Although the Inverleith House exhibition may on first impression imply that Twombly is a flower painter, his work is full of subtle references to European culture and classical antiquity. His iconography includes references to many aspects of European culture from Homer to Mallarmé. At the Venice Biennale last year he was awarded the Golden Lion Award when he exhibited his Lepanto series, (1994) a twelve-part series of works based on a naval battle that helped to rescue Europe from the Ottoman Empire. Roland Barthes singled Twombly out when he was looking for an artist to emulate.

In spite of these impressive recommendations, the first impression of Twombly's Edinburgh exhibition is of messy, childlike pieces of art. The initial disappointment gave way, however, as one viewed the works in toto, and as a certain momentum built up as one proceeded through the exhibition. They were not so immediately comprehensible as the works he showed as part of the National Gallery, London exhibition, Encounters, in 2000. But as more works were studied or experienced, the essence of Twombly was made manifest, in a subtle and distilled form. 'Roughly speaking, Twombly is concerned with the place where personal memory and public history collide; that sort-of Jungian never-never-land we call Western culture. Look at the pictures in Edinburgh and you see all kinds of histories and memories at work: scrawled dates suggesting some kind of personal narrative; the history of flower painting, and of the making of the individual works in the show; the story of the artist's life.'3

Cy Twombly moved from being an action painter in the 1950s to an artist who sought to include calligraphic signs and written words. Barthes commented that Twombly's written words on a canvas or paper were not writing as much as an idea of writing. There is essentially an ephemeral, poetic quality in Twombly's work. The individual pieces should be viewed almost in passing, in the manner that one might read a Japanese haiku. Like haiku, Twombly's pictures aspire to fleeting moments of beauty, passing thoughts, memories. In creating such works, Twombly deconstructs the idea of botanical accuracy: these works seek to capture the idea of an iris - its haughty grandeur - but not its actual appearance. To help us in this process, Twombly scrawls 'iris' and other scrappy bits of text across the drawings with a red crayon. The artist's intention, his mark is always in the forefront, not an illusion of the object represented. It has been suggested that his bewildering use of language - place names, repeated words and fragments of other texts - are due to the fact that he was a cryptographer in the US army in the 1950s.4 The supremacy of the mark, is further intensified by Twombly, by the fact that many works are dominated by the white paper or canvas. This intensifies the gestural quality of his work.

There is too, an epic quality about Twombly's work, which makes it difficult to appreciate in reproduction. His scribbled, snatched lines, the impastoed application of paint, imply a private world. The amplification of scale, however, assures their rightful place as a visual poetry of great significance. 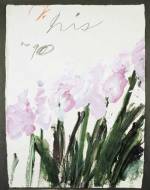