An exhibition of more than 80 drawings by Cy Twombly is on show at the Hara Museum of Contemporary Art in Tokyo. The works give an insight into the formation of Twombly’s characteristic style through process and experimentation

An exhibition of drawings by Cy Twombly (1928-2011) at the Hara Museum of Contemporary Art in Tokyo explores the processes and development behind the artist’s monumental works. Twombly himself took part in the selection of more than 80 drawings on paper completed between 1953 and 2002, with Julie Sylvester, curator at the State Hermitage Museum in St Petersburg, where the exhibition was first on show in 2003.

Twombly is considered one of the greatest painters of the 20th century and his signature scrawl is collected by major museums across the world. His unique style sampled aspects of abstract expressionism informed by his education at Black Mountain College in North Carolina combined with European history and myth as subject matter, inspired by his move to Italy midway through his career.

The low-rise, curved building of the Hara Museum is set within a sculpture garden tucked down a quiet residential road a short distance from the busy hub of Shinagawa in Tokyo. Its small gallery rooms offer an intimate and extensive journey through the gradual shifts in Twombly’s style and subject matter.

Twombly’s early drawings from the 50s and 60s show an accumulating interest in gesture and movement. These works are fairly minimalist, with backgrounds of painted black, grey and white, giving precedent to the development of line. Practising motion on paper, his hand moved crayons through a thin surface of wet house-paint, or the side of a pencil smoothly across bare paper, almost like an exercise. Developing pattern through repetition, he was gradually carving out the trademark scrawl that became so well known later in his career. The continuously curving lines move off and back on to the paper field with some stamina, like wild overgrown grass.

The origins of Twombly’s style grew from his education at Black Mountain College under Franz Kline and Robert Motherwell, and an influence from abstract expressionism in New York where Jackson Pollock was experimenting with action painting and Mark Rothko was inspiring the colour-field style. While there are aspects of Pollock’s drips and Rothko’s minimalism in the drawings, Twombly’s work was also something very new. There is a soft, romantic style to his line, which can be seen in these drawings, done at a very early stage in his artistic career.

This softness is woven with Twombly’s continued interest in nature. The slight curves of a leaf-shaped form can been seen recurring across the decades at different stages in the exhibition – first as a mono-print, then as an outline in ballpoint pen, next as background beneath a collage. From natural scrawls and leaf-print patterns, graphic symbols begin to appear in the drawings in coloured pencil and ballpoint pen. Shapes, letters and numbers, even lists and equations, scribbled out and smudged, surge and build up from the corners of the paper.

In Bolsena (1969), rectangular squares in neon-green pen and pencil seem out of place among natural curves and scribbles. Yet, in fact, as well as curves, Twombly worked a lot with rectangles, rectangles of paper that he cut out and used within collages. While the straight line is less characteristic of Twombly, the works in the exhibition show a lot of interest in the “edge”. Twombly layered graph paper, postcards and other drawings on top of drawings where the collaged paper created a border of control for an explosion of pencil or crayon.

We also see how Twombly used the drawings as plans for larger works. In Study for Treatise on the Veil (1970), strips of dark-green painted paper are layered horizontally across a white page. Twombly made the large-scale work,Treatise on the Veil (Second Version)in the same year, as a vast canvas painting of nearly 33 feet (10 metres). The large-scale piece looks very different from the study, however. It is made in white crayon on black house-paint. The bold green colour from the collage has been replaced by a thin, soft line. Tracing these processes gives an insight into how Twombly worked, translating his ideas from drawings to large-scale works, amplifying scale, but maintaining simplicity.

The title Treatise on the Veil refers to Twombly’s interest in mythical themes, which grew stronger when he moved to Rome in 1957, setting up a studio overlooking the Colosseum. Classical names such as Orpheus, Adonis and Pan infuse the drawings through titles, quotes and text written on the paper. Two drawings, one titled Venus and the other Apollo (both 1975), show the titular words scrawled centrally in red and blue crayon respectively. Surrounding them are lists of associated words that build up like a thought diagram.

The works in the final room are a combination of styles accumulated throughout the exhibition; drawing, collage and painting on paper. We see the emergence of Twombly’s celebrated style seen in larger-scale works that explode with colour and natural shapes. Scenes from an Ideal Marriage (1986) is one of these colourful accumulations. A central piece of collage is buried under paintings of bright abstract flowers peppered with Twombly’s signature blood red. In Untitled (2001), the leaf motif recurs under layers of purple hydrangea patterns, and yellow drips stream from above, combining the natural European influence with the brash New York style. In Nicola’s Irises (1990), tall, dark-purple flowers take on a recognisable form through a purple scribble with long emerald-green stems. Colour is one of the major accelerations of this room. The works have gradually journeyed from minimalist neutral tones to a maximum range of neon yellow, purple, pink and red. These works are no longer processes or experimentations, but finished works that achieve the same height of experience as his large-scale works, such as the Roseseries (2001-8), or the Lepanto series (2001) for which he received the Golden Lion prize at the 49th Venice Biennial.

From drawings with crayon and house-paint, to experimentation with symbols and numbers, to collage, to paint dripping and, finally, to the accumulation of techniques, the exhibition is a journey through Twombly’s experimental processes, which reaches a climax in style and composition parallel to his larger-scale practice. 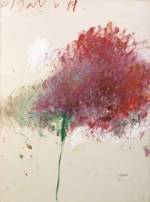 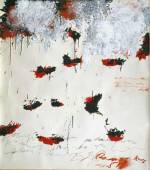 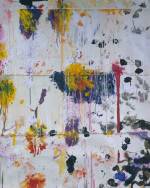