Coming Home! Self-Taught Artists, the Bible, and the American South

Coming Home! Self-Taught Artists, the Bible, and the American South

'Coming Home!' showcases 95 paintings, sculptures, wood carvings and assemblages by 73 self-taught artists from the American South who, despite their lack of training and formal materials, creatively and resourcefully expressed their rich spiritual lives in works of art that are impressive in their variety, intensity and sincerity. The show serves as the inaugural exhibit of the Museum of Biblical Art's expanded headquarters at the American Bible Society, located near Lincoln Center in New York City. MOBIA is the country's first scholarly museum devoted to examining the connection between art and the Bible. Historically, biblical stories and symbols have been important in the spiritual lives of people from many faith backgrounds. The intent of MOBIA is to stage exhibits that reveal how the Bible's stories and symbols inspired artists in their work.

The exhibit's title comes from a popular gospel hymn that proclaims the Day of Reckoning - when Jesus will return to earth and God will bestow his final judgment on man - to be soon at hand. The curators organised the works thematically, based on biblical narratives that were, and remain, central to the beliefs of evangelical Christians. As viewers travel through the exhibition space, they will encounter works that are touching in their naivety; startling in the artists' profound understanding of the human condition; or frightening in the artists' conception of what awaits those whose who have courted God's displeasure. But in whichever category the curators decided to place a piece (Southern Religious Life; the Garden of Eden; the New Adam; or the New Heaven and Earth), all of the works demonstrate how fragile was the line between the artists' life experiences and their religious beliefs. For many Southern folk artists, the sacred and secular aspects of their lives were not and could not be separated, and this remains true today. The hardship that poor Southerners in urban and rural areas continue to experience, perhaps, has made biblical narratives, particularly the imagery of the cross, relevant and accessible material from which to make art.

While well-known self-taught, black American folk artists are well represented in the show (Howard Finster, Clementine Hunter, Sister Gertrude Morgan and Mose Tolliver), many of the most compelling pieces were produced by emerging folk artists. For example, 'The Last Trumpet,' by Joe Minter (b. 1943), is an inventive piece in which the artist used abandoned objects, such as metal seats, a meat grinder and an old cornet to form three angels that proclaim the imminent end of time. In his hometown of Birmingham, Alabama, Minter has filled his garden with such whimsical, even humorous constructions. Similarly, in 'Taking up Serpents, Speaking in Tongues, Singing God's Praises,' (2003) by Jim Shores (b. 1952), the artist has made a literal representation of a passage in Mark's gospel (16:17-18):


And these signs will accompany those who believe: In my name they will drive out demons; they will speak in new tongues; they will pick up snakes with their hands; and when they drink deadly poison, it will not hurt them at all; they will place their hands on sick people, and they will get well. (NIV)

In this over life-size statue, Shores created a frightening figure, whose gender is unclear, casting out demons, which appear as metal snakes that are wrapped around the figure's arms and sit coiled in a wooden basin. The figure has a large, metal cross around its neck. The eyes of the figure bulge from its head, and the mouth is a perfectly formed circle that seemingly emits a cry of anguish.
Perhaps the most startling and effecting images that viewers will see at this exhibit are four representations of the crucifixion, which hang on a partition in the centre of the exhibition space: 'Crucifixion,' circa 1968, paint on wood with human hair, by Chester Cornett (1912-1981); '9-11, The Cable That Snapped Before They Saved Me,' circa 2001, metal, wood, cable and paint, by Lonnie Holly (b. 1950); 'Crucifixion,' neodymium, wood and cloth, by Jesse Aaron (1887-1979); and 'Untitled (Crucifixion)', 1994, mixed media, wire, wood, scrap metal and rubber, by Hawkins Bolden (1914-2005). In Holly's piece, there is no figure, only a large metal cross and a wooden bucket, presenting a stark image for viewers to consider along with the provocative title. Aaron's work is a crudely constructed piece fashioned from swamp wood found near the artist's home in Gainesville, Florida. Like many Southern swamp dwellers, Aaron believed that the roots and branches of swamp trees contained spirits, a belief drawn from his African heritage. By creating his work, Aaron believed he was freeing the spirits from the wood.

Many pieces exemplify two themes that emerge repeatedly in Southern folk art: fervent patriotism and the hope for a Christian America. For example, 'Homeplace,' circa 1998, paint on canvas, by Benjamin (BF) Perkins (1904-1993), merges the American flag with symbols of Calvary, while 'The Moon and the Stars,' circa 1980, oil on board, by Howard Finster (circa 1915-2001), combines his vision of other planets with the stars and stripes to relate a biblical prophecy about the establishment of a Holy City on earth. Finster, whose works have been reproduced in a wide variety of media, including on album covers by American rock bands REM and Talking Heads, is one of the most famous Southern black folk artists. His work epitomises the whimsicality and creativity combined with conservative and quite literal readings of biblical narratives that can be seen in much Southern folk art. His innate sense of balanced composition, unorthodox colour palette and beautifully constructed frames ('There Is A House of Gold') are, indeed, wonderful examples of how self-taught artists have used everything from five-and-dime store beads and sequins to swamp wood to replicate their dreams and visions.

Although mainly uneducated or illiterate, many of the artists included in the show incorporated written biblical texts or personal messages into their work. In the South, it is common to see signs 'advertising' religion, and some artists have chosen to mirror this tradition by using their art to preach the gospel through a combination of word and image - the primary tools of the advertising industry. Certainly, Finster used his work for this purpose, as did Sister Gertrude Morgan, who had a street ministry in New Orleans during the 1960s and 1970s.

Because they did not have formal training, for the most part self-taught artists did not create lifelike representations but drew on their visions, dreams and memories. Visions were important elements of spiritual life for black slaves from Africa, and for blacks from such other cultures as Haitian. In 'He Doth Great Wonders', circa 1970, pen, watercolour and gouache on paper, by Morgan (1900-1980), for example, Morgan depicted her red dragon with seven heads, as described in the Bible (Book of Revelation, 12:3), but her dragon appears as a white giant, similar to giants seen in contemporary illustrations of fairy tales, but these heads have what seem to be antennae and goggle-like glasses, making them look like aliens from another planet. Morgan's image is not nearly as frightening as the most severe forms of God's judgment that are described in the Bible, and which other artists have depicted more forcefully, but certainly it is an intensely personal and quirky expression, two qualities inherent in all genuine folk art.

While MOBIA's space is relatively small, the design is apt to capture for viewers the qualities that spiritual seekers through the ages have cultivated. Soft lighting; intimate corners created with partitions within the single, large room; and the nature of the art itself all contribute to what most likely will be a contemplative experience for museum visitors.
'Coming Home!' can be viewed at MOBIA, 1865 Broadway, through until 24 July 2005. Admission is free. The exhibit was organised by the Art Museum of the University of Memphis with support from Humanities Tennessee, the National Endowment for the Arts and The Rockefeller Foundation. 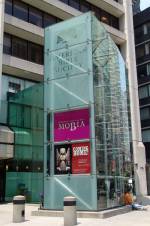 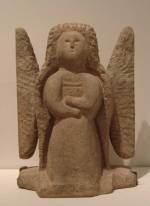