Young Chinese Artists: The Next Generation

The survey and coverage of the post-1975 generation of Chinese artists has long been a specific global requirement. The artists are importantly viewed as being broadly representative rather than being selected as being in any way the best artists of their generation. The editors have each a solid foundation of experience of contemporary art in China. Both Noe and Steiner were founder and co-founder of the so-called ‘Ministry of Art’ as a platform for the independent promotion of young Chinese artists. Xenia Piech is a Beijing-based Sinologist and art historian again specialising in contemporary Chinese Art, and is the China Desk Editor for Art Asia Pacific. The 17 authors of articles also included are drawn from a wide range of individuals with close experience of the creative surge that has occurred in China in the past decade or so. The Editors claim that notwithstanding the growth in Video, Multi-media, and Installation Art, painting is still very much the “driving force in the contemporary art scene”. Accordingly the selections made broadly mirror the variety of media work, in video, photography, animation, performance, installation, sculpture, and graphic arts.

“Individualism, self-exploration, and existential issues“ are allowed to emerge as the most prevalent themes. What also comes through is a wider sense socially of individual and collective loss, through a sense of insecurity itself resulting from the cult of a new and hence much transformed cultural landscape, as distinct from that which existed beforehand. Various “solitary figures” are revealed in one position or another being metaphors, for that standpoint, coupled understandably with occasional (but not too frequently) resorting to nostalgia. This generation of course, following its predecessors, was influenced heavily by the turbulent social and political changes over time. For instance, unlike in the Mao era, the female body was re-emphasised, explicitly, often seen flirting with the blandishments of the emergent consumer society. Longstanding traditions in painting, as well as the cartoon or ‘cartoonesque’ visual style of earlier twentieth century official propaganda still holds firm. However a well-founded academic tradition through the art colleges transmutes the craftsman-like training into a reliable, even meticulous application of such skills to innovative art media, such as digitally processed photography, video, performance, sculpture, and installation art. Such a foundation of precision and rigour argues well for the expansion of all contemporary visual art in China.

Each university addresses this in its own way, so developing its own genres and specialisations ensuring a new diversity in output. This is in part a reflection of such staff skill and talent. For example the Sichuan Academy of Fine Arts in Chongquing has built a reputation with its Painting department, while the Shanghai universities tend to pursue new media, notably video and photography. But traditional and new media approaches are not mutually exclusive. In Hangshou the China Academy of Fine Art both offers a deep history-based art foundation as well as fostering highly innovative video or animation talents.

The editors emphasise that for the works reviewed, and indeed others compared, market value as such was not taken into consideration in the selection process, on the grounds that short-term market trends may not be truly definitive of individual quality. The market tends to hunt out undiscovered new talents energetically, and seeks to propagate such work internationally, often somewhat immaturely. A quick survey of purchasers or exhibitors of the work published here reveals only one work listed by Charles Saatchi, but this may already have changed. A wide range of European and U.S interest is also evidenced.

Meanwhile the urbanisation of China has advanced by 35% or so since l970, and that share is forecast to rise by at least 50% again by 2030. Many of those living in the new urban environment raise the question “what is China?” There is still a recurring nostalgia for the apparently simple life of parents and grandparents amidst the complexities of modern life. But there is alongside this a well-sustained optimism for the future according to the editors. A broad statistical analysis usefully provided, 23% of the artists are male and 7% female, and 30% are represented in ‘pairs’ or ‘duos’. 14 of the artists are Beijing-based: seven from Shanghai, and the others mainly in smaller cities. 13 are painters, eight are in photography or video, and six in other media, as well as two in animation and just one in sculpture. Of the artists in Beijing, 11 are from the Central Academy of Fine Arts in Hangzhou there are four from the China Academy of Art. All this testifies to the evenness of the selection process, which has recognized the multi-centred spread of the art colleges across China, although Beijing still exerts a more dominant position.

The book as a whole provides a most useful compendium of emergent trends in the under-45 age group of younger Chinese artists, their pressures and their progress. The works illustrated are clearly delineated in colour allowing a reasonable assessment to be made. 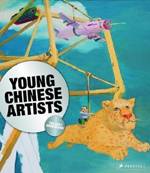