Book review: Where's My Space Age? The Rise and Fall of Futuristic Design

Where's My Space Age? The Rise and Fall of Futuristic Design

This beautifully designed book charts the influence of the space craze on Western culture in a unique and entertaining way. With special emphasis on the major effect that this movement had on contemporary design, we are taken through the rise and fall of a worldwide obsession with space travel, and its endless possibilities for the future.

The first chapter of this book describes in detail the history and speedy development of space travel, examining the social, political and technological changes that took place during the space era. Drawing on a diverse mix of sources, the author successfully captures the escalating mania that each technological development would induce in the public. Pictures of children's comics, toy spaceships and food are scattered over the pages and emphasise the childlike awe that both children and adults experienced throughout this fascinating era. The media had an important role in causing mass hype, among Americans especially, and the author explains the impact of newspapers and magazines on the people and technological advances of the USA. Amusing stories, and snapshots of people obsessed with space travel, are used to portray an impression of the absolute madness and excitement that the space age brought to several generations.

The Cold War is examined closely as a major influence on the rapid development of space age technology, and on the subsequent reactions of people throughout the world. Stories of shuttle diplomacy, and the competition between the USA and USSR, add some light humour to a subject that could otherwise be slightly tedious - indeed, the author emphasises the sheer silliness of space age politics.

After explaining the developments of the space age, the book moves on to the huge impact it had on design in its various forms. Many disciplines - from fashion design to architecture - were influenced hugely by all aspects of the space age, and designers immersed themselves in this new freedom. These people and their works reflected the public's demand for a way of living that would mirror the possible future - the designers were bringing to life childlike fantasies and a futuristic utopia - perhaps as a reaction to the various problems the world was experiencing. Essentially, the designers and the public wanted to escape to a place with no limits and no problems; the result was an influx of contemporary and innovative design portraying such a fantasy.

The discovery of a new world - the moon - brought with it the opportunity to start afresh. The question of tomorrow's home took on greater significance and became the subject of increasing curiosity.1

With a contagious enthusiasm, the author explores the impact of the space age on interior design and furniture design, looking at influential designers such as Eero Aarnio and his 'Bubble Chair' of 1968. Authentic photos give a clear insight into the excitement that these creations must have caused at the time - they are unconventional even by today's standards. Fashion design is also looked at closely, with the inclusion of 'built outfits from hard materials that had more in common with engineering construction than couture'. A multitude of designers are covered in this book, including Joe Columbo, Verner Panton, AJS Aerolande, Pierre Cardin, Paco Rabanne, Mariko Mori and Ushida Findlay - to name but a few.

Reading about and seeing pictures of these designs is both entertaining in itself and inspiring. It is understandable that decades on, people are still fascinated with the space age and the multitude of designs it inspired. The fad has not disappeared completely - people still buy inflatable plastic chairs, and fashion designers still create 'unwearable dresses in contemporary materials'. Indeed, the space age look has found a new home in the 21st century - in couture, in Ikea and its related enterprises, in every form of design in fact. The 'live unlimited' ethos, so celebrated today, has its roots in the space age of the recent past. Barriers of convention that were lifted in the Sixties reappear and are smashed in a continuous cycle, as people are pulled between the past and the future for comfort and inspiration. Sean Topham succeeds in entertainingly explaining the space age - with its continued influence on today’s design - in this refreshing and well designed book. 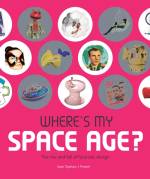 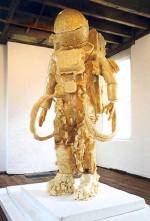