Book review: Walk to the Moon: The Story of Albert Houthuesen

Walk to the Moon: The Story of Albert Houthuesen

The clown is a rich cultural symbol in Western art representing a plethora of ideas and identities. It has been used by the artist as a form of self-portraiture to allude to the role of art as critic, dissenter, outcast, wanderer and enchanter. Pierrot, the mute poet can be seen as a “victim of a social destiny he endure[s] with resignation”.1 “The modern ‘Harlequin’ can be traced back, through Old French to Hellequin, an evil flying demon with an animal’s face. According to the mysteries of medieval times, the role of Hellequin was to transgress social taboos”.2 He was unpredictable and dualistic, “agents of the passage from one world, or state, to another”.3 The clown is a metaphor for the condition of the modern artist with poignant images that make up a roll call of the most significant artists of the 19th and 20th century. With antecedents such as Antoine Watteau, Jean-Étienne Liotard and Francisco Goya, major artists of the 19th and 20th centuries to depict the clown, include: Honoré Daumier, Gustave Courbet, Henri Toulouse-Lautrec, Pablo Picasso, James Ensor, Georges Rouault, Fernand Léger, Max Beckmann, Marcel Duchamp, Giorgio De Chirico, Joseph Beuys, Marc Chagall, Lucian Freud, Philip Guston, Diane Arbus and Cindy Sherman. Authors Gustave Flaubert, James Joyce, Henry Miller all portray clowns. In his early work, Picasso depicted Saltimbanques as social outsiders; at the end of his life he presented himself as a frightened old clown. James Joyce claimed: “I am only an Irish clown, a great joker at the universe.”4

The identification with clowns in the work of Albert Houthuesen (1903–1979) exists on several levels. Born in 1903 in Amsterdam, Albert moved to London at the age of eight, under traumatic circumstances. In Holland both sides of his family were involved in the world of theatre and music. His father’s first cousin, Johan Buziau (1872–1958) was the most celebrated comic actor in Holland. With Nazi occupation, an Austrian was appointed head of government, and Buziau ridiculed him on stage, and was placed under house arrest. He never performed again, living quietly until his death, “an ill and nervous man”. A set of rediscovered photographs of Buziau was subsequently used by Houthuesen, as vital source material for lithographs, drawings and paintings of clowns. Marcel Marceau remained a great mentor for the artist, “I’ve made drawings of clowns and I’ve only scratched the surface. One must paint as Marcel Marceau mimes. Marceau is remarkable”.5

It is the bizarre tragedy of Albert Houthuesen’s childhood that best explains the extreme pathos in all of his work, and why he worked in virtual isolation throughout his life. (see: http://www.houthuesen.com/) If Houthuesen was one of “the few artists for whom the cliché a born artist, matches the reality”, and for whom (as Martin Kemp observed of Arthur Boyd) “painting was as natural an act as breathing and eating”,6  Houthuesen’s commitment to art was nonetheless tested to the limit. At the wedding reception of his parents in 1901, his father Jean-Charles Houthuesen announced that he was leaving the family piano business and become a painter. His young wife did not recover from the shock and they argued over the years about their lack of financial security. Six weeks after the birth of their fourth child, however, in a rage, she hit her husband on the head with the heel of her shoe. The eight-year-old Albert witnessed the attack; his father died three weeks later. Albert remembers family members commenting on how fortunate it was that the children were so young, for they would not remember the event. As the eldest, and the one in his father’s studio at the time, Albert was the only witness, and he kept the terrible secret to himself for the next 40 years: “I can only think that the people who attended my father must have known the truth. But they were kind and thought this situation so ghastly that if it became a court case it would be manslaughter… And afterwards Mama saying, that this incident was my fault, because Papa had jumped up into the air whilst playing with me and pierced his head on the chandelier base. From that time on, everything was my fault. The very fact that one wanted to draw and paint meant that instead of being the mainstay on whom poor Mama depended, I was only a liability.”7

Richard Nathanson’s BBC documentary Walk to the Moon, and his biography of the same title, are based on his conversations with the artist which began in 1967, and continued at weekly intervals until the summer of 1970, and then intermittently until the artist’s death in 1979. It is an intriguing story, which describes an impoverished childhood in London, after his mother fled from Holland, his eventual acceptance to the Royal College of Art, his mother’s continued mania and efforts to sabotage his art, including slashing his paintings with scissors. She lived into her nineties. During the 1920s, Houthuesen worked at the Royal College of Art with Henry Moore, Barbara Hepworth, Edward Burra, Ceri Richards and Cecil Collins, and thereafter, in isolation. “Walk to the Moon” is the English translation of the Dutch expression “Loop Naar de Maan” meaning “Forget it”. It was how Houthuesen's mother would respond whenever as a child, he asked her for painting materials.

Houthuesen’s distinctive Clown Faces (1976–1978) were recently on show in London, providing an opportunity to view one aspect of the work of this extraordinary artist. An extended survey exhibition would now be appropriate, where a full appraisal of his work, can be made. For Houthuesen the clown was a symbol inseparable in spirit from the artist and the poet into which, melancholy and despair could be cast alongside the absurd, the generous desire to entertain and enchant. He attended the theatre and ballet regularly all his life, as he explained to Nathanson:

I think that anyone who clowns a great deal is the very one who, in another sense, thinks in a very serious way. It is a comment on despair. And but for this the world would go completely mad.8

Sir William Rothenstein was instrumental in Houthuesen’s career, enabling his entry into the Royal College of Art, and having him to stay on occasion in his own home during his student days, as a sanctuary from his mother’s mania, particularly her fainting fits that she hoped would ensure that her son could not attend College.  At the very end of his final term at the Royal Academy he met a fellow student, Catherine Dean; they married four years later. But following his course he was unable to find work and constantly castigated himself:

I made many street drawings at this time. It was simply ghastly. There I was, a married man, quite unable to earn a living as a painter. I would have mad ideas thinking that perhaps if I walked about the streets drawing London types, I could find free models and also earn some money. Sometimes people would be amused and come and look at the drawings and at me. Sometimes they were very angry – apparently because having the time to stand and draw instead of earning a living, I was far better off than they were.

Now that I look back, these drawings interest me because they remind me of what one wanted to do, hoped to do, and was actually going through. My misery was much like the ‘Out of work’ men I drew, only I had a mighty desire and longing to draw and paint.9

With reference to The Stack Yard, (1935) which was acquired by the Tate Gallery, he described the landscape in Wales, where he and Catherine visited throughout the thirties, as wonderful. The village was home to colliers who worked at the Point of Ayre Colliery two or three miles away from the coast. He found these men fascinating, and drew them, finding parallels with the clown, where the collier’s mask was created by a thick coating of coal dust at the end of the day, rendering them unrecognizable. Like his own family, music was a key to their lives. In the portraits and drawings made in Wales, there is a stylistic and humanist influence of Van Gogh. When he returned to London with the collier paintings and drawings, he was at once accused of being a Communist.

Crown of Thorns, (1940) later acquired by Tate Britain, links Christ’s suffering to the suffering of innocent victims of war, the inevitable destruction and change he found, unbearable to describe in explicit terms. Rejected by the army on health grounds, there is impotence expressed in the face of universal threat. His application to become a war artist was turned down and his first studio in St John’s Wood was destroyed during the Blitz. In 1944 Houthuesen made his first clown studies sketches at the Doncaster Theatre of the Hermans a family of Russian Jewish musical clowns. Houthuesen chose a private symbolism to express his repugnance to the war, and he did so in traditional terms: Voyage (1940–54) draws on the symbolism of flowers, so strong in the Dutch tradition of painting. Anachronistic perhaps in a wider context in Britain, it is a moving and tender vision. The endless stress of the war on a delicate man resulted in a severe nervous breakdown in 1944. It was only years later, in 1952 that he and Catherine had a home of their own that gave a sense of security and permanence. It was there that Albert finally confided the truth to her about his father’s death. The paintings that followed use the sea to assuage his long held anguish of his mother’s fatal attack on his father. The aggressive application of paint can be seen as abstracted and intentionally disturbing. In art, as in literature, the sea is often a metaphor for the soul; it represents eternity.

I cannot tell you what paradise it is for us to be here, in this quiet place with a roof over our heads. I look at the sky and the vast clouds became a seascape. I put my colours out and the moment I have annihilated this frightening white of the canvas, I’m lost in it again. I struggle through the surf and I’m battered against the rocks. And there it is.
I first saw the sea as a child in Scheveningen. And in Amsterdam the feel of it was always there. Much later I saw and heard the raging and ravening beasts and dragons that guarded the coast of beloved England with hearts and bones of flint instead of dykes of earth and wood.
The sea has always fascinated and terrified me. If there is anything in the seascapes, then it is because of an attempt to overcome an overwhelming sense of despair. I see the hardship and suffering of human beings in the eternal wrestle of sea, rocks, and land. And I paint the sea again and again eating the world away.10

Albert Houthuesen’s clown faces offer a multi-faceted self-portrait that is far more than merely a sarcastic or mournful caricature. The clown’s mission is to remind idealists of quotidian reality, of existential dilemmas. A standard device in the art of clowning is, “endless and unbearable repetition. It serves as an excruciating illustration of the fate that condemns humanity to repeat itself – the same mistakes, the same recurring illusions born of the same impossible dreams”.11 And yet in Albert Houthuesen’s life story, there remains a powerful affirmation of the creative act itself.

Richard Nathanson, Walk to the Moon: The Story of Albert Houthuesen is available from The Putney Press, P.O. Box 515, London, SW15 2WB. 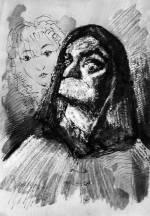 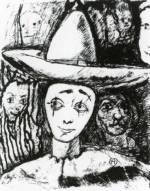 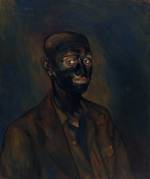