The Woodblock Painting of Cressida Campbell

Containing nearly 300 illustrations The Woodblock Painting of Cressida Campbell is the first comprehensive survey of one of Australia’s finest artists. Edited by Peter Crayford and printed on fine paper, it contains a forward by Art Gallery of New South Wales, (Sydney) director Edmund Capon and an introduction by art critic John McDonald.

Cressida Campbell was born in Sydney in 1960 and works from a studio in the Sydney beachside suburb of Bronte. After training at East Sydney Technical College (now the National Art School) she discovered an affinity with woodblock printing but was frustrated by the restrictions of the medium. In 1980 she studied at the Yoshida Hanga Academy in Japan, which gave her the skills to manipulate the medium and develop a new technique. Like ukiyo-e, her style is highly labour intensive – it begins with the drawing, she then carves a woodblock and hand paints it with watercolour paint1. Finally she freshens up the image with a spray of water and takes a single impression on paper. The unique woodblock painting methods of Cressida Campbell produce, not an edition of prints, but a single image. In this she is not a printmaker but an artist who employs printmaking techniques. Drawing occupies a pivotal role in her image making where her exemplary skills are used to capture a range of subjects: interiors, still-life, bushscapes, harbour views and gardens.

Cressida Campbell makes perceptual drawings initially in a sketchy form, directly onto plywood. The sketch forms the basis of a more detailed drawing, which is then carved. “I always draw directly on to wood with a rough composition before deciding on the right one. Then it goes through a process of endless editing until I think the design is right. I often put in too much detail and get rid of objects to simplify the composition. Sometimes I will saw the woodblock into another shape until the composition is correct. You have to 'murder your darlings' and be very rigorous about it at this stage. I try to think of the colour when I am editing the composition as well as the line because colour can alter the whole balance of the composition”.2

Using a 2B pencil, the drawing stage of Campbell’s work is very detailed and time-consuming. Recently she completed a four metres long drawing of objects that stretch along the shelf behind the kitchen. The drawing took a month to complete. A tiny drawing, 20 x 20 cms, will usually take 2–3 days, depending on the detail. “I love doing it but it is essential to be very critical. I try to be as true to the subject, whether it is a pot, a plant, a knife or a human being, as possible. The more you let your ego go, and give yourself over to pure observation, the better the drawing will be”.3

Campbell’s woodblocks are created, by carving the drawn line, on the plywood base, by knife or electric engraving tool. The surface is then applied with pure watercolour, using small brushes with just enough water to make it adhere to the wooden surface. The intensity of the pigment can be used to amplify the relationship of forms within the composition, the immediacy of the drawn line and the “gaps in between that are really important”.4 Where water or another medium will reduce the intensity of pigment, Campbell’s method ensures the primacy of colour within linear rather tonal images. Once the paint has been applied to the wood it is sprayed lightly with water and then a single rubbing is made, resulting in a surface quality which is quite different to paint applied by brush or any other direct means to paper.

It is appropriate that the first book on Cressida Campbell’s work should be conceived and produced as meticulously as her woodcut prints. Indeed the sumptuous production is more like a portfolio of prints than a book with a large print-run. Campbell and her husband, film critic, Peter Crayford, worked collaboratively on the book. Crayford edited, and they chose all aspects of the publication with great care. The Publication is notable for the actual choice and quality of paper and printing, as much as the design by Valli Moffitt, and contents. The printer, Tien Wah Press based in Singapore was chosen after considerable research on paper and practical aspects of production had been carried out. Campbell explains: “Peter and I chose the paper which was inspired by a catalogue we saw in London called The Lucknow Menagerie, a collection of old Persian illustrations of animals and birds. I discovered it in a gallery when I was having a show in London, several years ago. It had the feel and texture of my own prints. It was unsurfaced and tactile and I wanted the ink to really sink into the paper. The name of the paper is Mohawk Via Velum and was difficult to indent such a large quantity as it is most often used for specialty printing rather than book publishing. Another inspiration was a French art magazine from the late thirties called Verve, which printed lithographs on their covers and interiors by artists like Matisse, Braque and Bonnard”.5

The first print run of The Woodblock Prints of Cressida Campbell, was 2000 copies – relatively large for an Australian art book. It sold out in two weeks – just before Christmas 2008. Because of the difficulties of indenting the paper it was not possible to re-print until March 2009. The second edition of 2000 copies sold out prior to landing, following it being listed on Amazon. A small advertisement in The New York Review of Books led to it selling out in the USA with many orders outstanding. The Woodblock Painting of Cressida Campbell is one of the most exceptional art books produced. The quality is due to the same meticulous approach to craft that characterizes Campbell’s art practice. During the actual printing, to ensure that the colours were true, Campbell and Crayford stayed at the Tien Wah factory for three days and nights, 24 hours a day to inspect each signature as it came off the press. “The printers wake you up each hour for an inspection and after three solid days you are almost hallucinating. But it was worth the effort and I can't imagine any other way of doing it if you want the quality, especially on a non-glossy paper, which absorbs so much ink. I did the 2nd edition by myself, as Peter was ill and could not fly to Singapore. Peter found out after the 1st edition that the paper manufacturer produces this paper from 50-100% re-cycled material, without bleaching and using only wind-power to power their paper mills. The printer, which is huge operation, exporting to numerous countries, had in fact never printed on this paper before. We had quotes from China, Australia and the USA. The Chinese were less expensive but the language barrier was difficult, something that Singapore, speaking English, had as an advantage. Tien Wah Press could also arrange 24-hour press checks. They have several small rooms with a sofa to sleep on and a TV and bring in food to keep you going. Their staff were also very charming, and helpful. If we do another edition it's likely to be 5000 copies, again at Tien Wah Press”.6 This is a most fitting publication for Cressida Campbell who has worked independently and in spite of fashion or pressure to succumb to a more cost efficient process; Crayford’s support and collaboration has made this superb publication possible. The couple’s altruism and lack of pretention is typically reflected in the price - $120, when two or three times that would have still seen them fly off the shelves.

Favoring images that appear screen-like, rather than possessing a single perspective, gives Campbell’s work an affinity with Asian art. “I enjoy work from many periods, places and styles but I suppose the Japanese ukiyo-e woodblock print masters like Utamaro, Hokusai, Eisen, and Kuryusai have definitely inspired my own work. Although my work is Western, in some ways I have found a natural affinity with Eastern or Asian aesthetics. Like the Japanese it is the combination of the natural world with man-made objects, however humble, or modest in subject, that affects me. I have also travelled extensively through Asian countries and seen works, temples, and gardens first- hand. I also like intimate subjects whether it is a detail seen in the Australian bush or the glimpse through a door, rather than the whole panorama. I have done panoramic pieces but they have more to do with the influences of early colonial painters or Chinese scrolls. Indian and Persian miniatures I find interesting too, especially their wonderful sense of colour, the fine hairline drawing and the patterning. My bush landscapes have a screen-like quality rather than being a straight painting”.7

Although firmly based in observation, and meticulously produced, Campbell’s images are liberated from mere representation. While many of the still-life works are beautifully precise they achieve a freedom from either scientific exactitude or mundanity by virtue of the layering process that has taken place. As Campbell works within the picture plane, she imbues it with a sensibility that refers to ephemeral beauty, the importance of reflection, the utter necessity of making images. Campbell’s work has a formal rigour, which enables her to depict a private and harmonious world, without overt aspirations to the metaphysical, preferring literal titles for her works. Where her works sometimes conjure up the hermetic world of Pierre Bonnard, (albeit with a heightened palette) she also alludes to a commonality of lived experience – a private, unpretentious world where the commonplace is transformed into life-enhancing compositions. 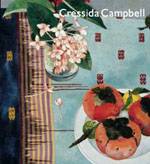