The publication covers the New Orleans photographs by Theodore Lilienthal mostly made in 1867. The work comprises his photographic campaign, “for the purpose of advertising the City of New Orleans,” a photographic entry for the Paris Exposition of l867, representing the USA: German-born Lilienthal was one of the American photographers so honoured.

The venture assisted the urgent promotion after the Civil War, of New Orleans as, ”the chief centre of the southern and western trade of the United States.” This was an era of post-civil war reconstruction. Accordingly 150 large portfolios were assembled, and the photographs portfolios of 12-inch by 15-inch albumen prints were assembled and the photographs presented in Paris to Napoleon III, who had a close association with the formerly French city. The intention was to restart the substantial trade that had been cut off by the effects of the Civil War, ”La Nouvelle Orleans et ses environs” is at last recognised today as one of the major achievements in nineteenth century urban photography.

Lilienthal had flourished early in his career, but his later years were marked by misfortune, and ultimately a degree of unwarranted obscurity followed. And in l894 his studios were gutted by fire, destroying all his negatives, and so not available for posterity. This publication is therefore timely, not only since Lilienthal has effectively now been rediscovered, but also, in a manner unforeseen, this prompted by the city’s recent devastation by Hurricane Katrina. Just as in Lilienthal’s own lifetime, so for the last few years, the topographical record he had provided of the urban landscape there has again become highly valued and cherished. Even before Katrina, many nineteenth century buildings had been lost by redevelopment; the established architectural historian Gavin Stamp is quoted in Van Zante’s text, as saying that, “surely the real value of photography is as an accurate and vivid recording device, which has preserved the appearance of streets long altered and buildings long demolished” . Both the historic “Vieux Carre” and the original commercial district had fortunately survived the twentieth century.

In the catastrophe of August 2005, the oldest buildings remaining, as recorded in Lilienthal’s work had for the most part survived in tact. However the famous Mint building, the Custom House and a number of nineteenth century churches, were extensively damaged almost beyond repair. And after all, the priority in reconstruction overall has been to recover the housing stock, mostly still abandoned by the inhabitants and not reinstated. In particular too, the City Park lost literally thousands of trees. The famous Charity Hospital, dating from 1737 remains still shut up. The twentieth century city suffered far worse, being built on reclaimed land, for which there is as yet no secure future. Lilienthal had also carefully documented the city’s “Back Swamp”, where subsequent ill-advised residential development was flooded out. Now, just as the desecration of the Civil War had generated urgent new construction, so again has come the urgency post-Katrina.2

Lilienthal worked with the wet plate collodion process ensuring a consistent tonality. Later of course at the end of his career this was supplemented by the dry-plate negative process. In taking images, Lilienthal measured each exposure over a span of 2-3 minutes, so great care was needed in preparing the plates by hand in the dark room, probably it must be said with toxic side-effects. All this had to  be managed in the strong heat of the New Orleans’ climate. There seems an uncanny quality of presence and absence evident for today’s viewer, rather as in the filmic set -pieces of French film director Alain Resnais.3 Lilienthal had to operate the large field camera himself - dragging the equipment carefully through the surrounding swamps often even onto church steeples for elevation onto towers and rooftops. Two or three negatives per day had to be produced a formidable task to meet the Paris deadline. Lilienthal’s skill in the medium is evidenced in the positions chosen for the camera, always a matter of highly experienced judgment, both for placement and for light.

It is evident that certain views, certainly in industrial locations, had inevitably to be carefully staged, especially with factory dockside and school sequences. But in others the intrusive passer- by would just be acceptable., lending a sense of immediacy to the slow process. Many views appear to have been taken in early morning stillness, before the urban bustle began and the trams rattled by. In one view, “St Louis Hotel” there is a sense of melancholy and motionless, giving a noted air of unexpected equanimity to the streets of “The Big Easy” at certain times of day, after lunch for instance, or in the early evening. The book shows clearly grouped close together on one plan all the buildings taken, of the central quarter of New Orleans, a relatively compact spread. Interestingly too, early locomotives are captured in all their powerfulness, the steamers likewise in their elegance. This book provides a superb photographic documentation of a now still-threatened city of great historic importance to the USA. Merrell, the publishers, are strongly to be commended in taking the initiative to publish this important and historic collection of urban photography, and at a time when substantially the city remains at risk against the elements for the future until at least, a fuller protection system is installed than the present levees.2 Lilienthal’s photographic documentation is exemplary.

More of such documentation within cities is required as a basis for conservation. On another level there is fully perceptible to the contemporary reader a wistful sadness inherent in the capturing of an earlier New Orleans for all posterity. 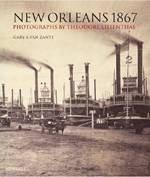