Tate Modern has shown great perception in mounting the current exhibition, 'Jungles in Paris'. It was organised by Tate Modern, Réunion des Musées Nationaux and the Musée d'Orsay, Paris. Later next year, it will travel to the Grand Palais in Paris (17 March-19 June) and then to the National Gallery of Art in Washington, DC. The show has been curated by Professor Christopher Green of the Courtauld Institute of Art, London, assisted by Frances Morris, a curator at Tate Modern, and by Claire Freches-Thory, the Conservateur General at Musée d'Orsay. At Tate Modern, Juliet Bingham assisted in the presentation. 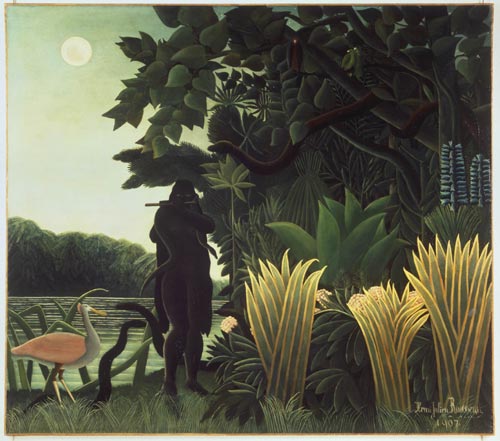 There has always been, particularly among city-dwellers, a widespread fascination with the idea of the jungle and its animals. In fact, this interest ran contemporarily with the explorations of Livingstone and Stanley in central Africa. Children's books such as Rudyard Kipling's Jungle Book, and more recently, Les Animaux de la Jungle, have enthralled children in France for decades. This is the same world that so fascinated Henri Rousseau. An important factor in this interest was that one did not have to endure the risks represented by jungle animals, nor the climatic discomfort experienced in travelling there. This was the advantage sensed by Rousseau - the jungle seen from the nursery table. His works were created in Paris, after visits by 'Douanier Rousseau' in his own time, to the Natural History Museum, and to the Jardin des Plantes. They amused, rather than obsessed Parisians. Rousseau, however, was as obsessed by the jungle as by his much-needed ambition for eminence as a painter.

Of Rousseau, much is known: that he was a customs official in Paris, who contrived the impression that he had travelled widely. He had no formal education in art or as a painter. The cages of the zoo in Paris's Jardin des Plantes, and the 23,000 bird species and 6,000 mammals in the Musée National d'Histoire Naturelle provided Rousseau with many of the images that he incorporated in his paintings. One has the image of a somewhat Hulot like- character, striding purposefully through the exhibits, and halting before a chosen subject. The 'Douanier Rosseau' indeed was the butt of his artist friends. But he was impervious to criticism, and even Picasso came to admire him as a 'copain.' In the centre of the exhibition rooms at the Tate, one entire room is dedicated to the life of his contemporary Paris and to the interests, and pursuits of his contemporaries. This room is very documentative, and fully repays some time out of the span of an exhibition visit there. Vincent Gille of the Pavillon des Arts has curated this room, and selected the material that has endowed the exhibition with such extraordinary authenticity.

Predictably, as his career developed, Rousseau fell foul of the conventions of the French Academy in seeking acceptance: his fresh approach to configuration, botanical realism, and traditional forms of perspective placed him beyond acceptance, Instead, he came to be admired by sections of the Paris avant-garde for his special kind of primitivism, and for his mysterious but dramatic blazes of colour.

One reviewer, who will be nameless lest one of the Douanier's beasts were to escape and maul him, makes much of his personal view that Rousseau was a 'bad painter'. It seems the 'academy' never dies: it was, in fact, precisely his idiosyncratic, naïve style, that while never advanced critically by Rousseau himself, came in the end to sustain and delight his strong personal following in Paris; Rousseau's work is the stuff of drugs, and of dreams. 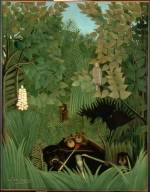