Beyond El Dorado: Power and Gold in Ancient Colombia

Beyond El Dorado: Power and Gold in Ancient Colombia

Beyond El Dorado seeks to cut through the myth of the golden city, but the reality is no less captivating than the legend. A multitude of treasures spanning more than 3,000 years of ancient Colombian ritual and adornment awaits visitors to the British Museum’s latest exhibition.

The European love affair with the fabled city of El Dorado is centuries old and fuelled not only the treasure hunts of the conquistadors, but generations of explorers with an insatiable lust for gold. However, what had become a wondrous metropolis of riches in the imaginations of men out to make their fortunes, started as rumours about the ritual ceremonies of the Muisca people of Colombia. El Dorado, literally “the golden one”, is thought to have been a man powdered in gold dust, who was paddled out across Lake Guatavita on a raft. There he would be plunged in to its dark waters, along with offerings of gold and emeralds, only to reemerge as the new chieftain. The stories seem to have some truth to them. A golden statuette, known as the Muisca Raft, was discovered in 1856 and is believed to depict this ceremony.1 Tragically, it was lost in a fire on its way to Germany and, as a result, a second example, discovered in a cave in 1969, will not be making the journey to London, as it is forbidden to leave the country.

The curators of Beyond El Dorado introduce the exhibition by attempting to set the record straight, that is to say that ancient Colombia is about more than a mythological kingdom of riches, and its story more complex than a tale of European greed and treasure hunts. To this end, some of the first exhibits on display are objects found by a British company that drained Lake Guatavita in 1909. Hampered by the thick mud, which dried quickly and set like concrete in the sun, it found for the most part, ceramics, jars and earthenware. This, the last of a series of attempts to get at the riches assumed to be hidden in the lake’s depths, may have been largely unsuccessful, but these modest objects are just as fascinating as their shiny counterparts. Of course, a great deal of gold was plundered from the jungles of Colombia, but as this exhibition demonstrates, unlike the materialist Europeans, the ancient Colombians valued gold because it was loaded with spiritual meaning. And in going beyond the myth of El Dorado, it becomes clear that the reality is far more beguiling and complex.

With more than 100 pieces from the British Museum’s collection and twice that number borrowed from the aptly named Museo Del Oro in Bogotá, Beyond El Dorado is overwhelmingly about the power of gold and its religious symbolism. The inhabitants of ancient Colombia were not one unified civilisation, and this display includes artefacts from six distinct cultures spanning 1600BC to AD1600. The result is a varied array of glittering votive offerings, status symbols and ritual items heavily spotlit in darkly coloured rooms, adding to the sense that these objects are shining out (and they really do shine) through the gloomy mists of time, if not from the bottom of Lake Guatavita.

For the people of ancient Colombia, gold had no monetary value, but rather spiritual and transformative powers. It was not only offered to the gods, but – together with the use of music, hallucinogens and dancing – also helped those who wore it to engage with the spirit world. With the use of bodily adornment and animal iconography, spiritual leaders believed they could take on the characteristics of a range creatures, including bats, jaguars and crocodiles, all thought to have the ability to cross liminal boundaries. This complex relationship with the animal kingdom is evident throughout the exhibition, ranging from a stunning necklace strung with golden jaguar claws and vibrant feather headdresses to cylindrical stamps, which were dipped in dye and rolled across the skin to produce patterns resembling snake skin or jaguar spots. Indeed, what this exhibition  highlights is that for the ancient Colombians, identities were mutable and the cosmos there for the exploring.

Also on display (and accompanied by eerie jungle sound effects) are beautiful egg-shaped golden containers for coca leaves and vessels for the lime that enhanced its stimulating properties. Included alongside these are intricately decorated snuff trays, musical instruments and figurines depicting headhunters holding up their trophies, all made using sophisticated metalworking techniques. Alloys composed of gold, silver and copper held symbolic meanings connected with the sun, moon, female and male, and worn by the elite these metals could aid communication with the divine on behalf of their community. Here we are provided with examples such as huge gold earrings, painful-looking nose ornaments and fierce anthropomorphic pectorals (a type of breastplate).

Gold was not only important for transitions in life, but also for the journey into the afterlife. Displayed along side funerary urns are objects that where buried with the deceased, including a stylised golden mask with a dangling nose ornament believed to have been placed over the face of the wrapped body to aid the individual’s transformation into a semi-divine ancestor.

Because gold can only be dated by style, many of the pieces on display could fall anywhere within a  2,000- or 3,000-year period and, given the geographic and cultural range on offer, this exhibition can do no more than scratch the surface of the varied and complex cultures of ancient Colombia. However, we are afforded a glimpse into a world that, far from being demystified, is shown to be full of drama, ritual and complex cosmologies. The curators have endeavoured to bring order to the huge variety of cultures and rituals that these objects represent over the course of three millennia in a relatively small space. And the result is an exhibition that offers a fresh look at the myths surrounding El Dorado and leaves a lasting impression on the imagination. 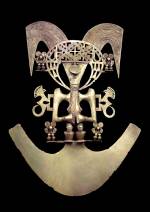 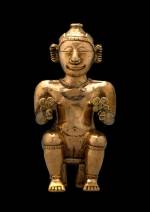 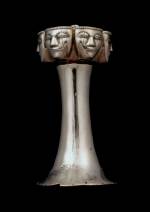 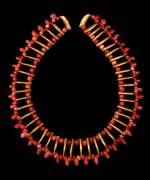 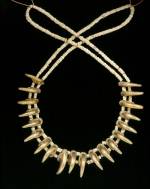