In the largest exhibition of Beardsley’s drawings for 50 years, we see evidence of his exquisite practice and a dedication to drawing in a painfully short life and career 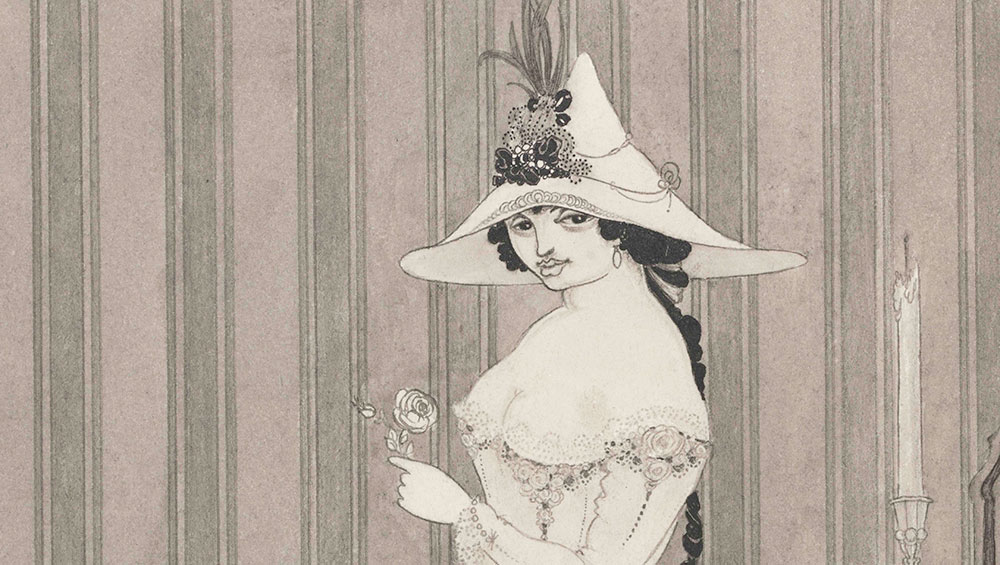 Tate Britain, London
4 March – 25 May 2020 (Tate's four galleries will be temporarily closed until at least 1 May, in line with advice from Public Health England.)

Aubrey Beardsley (1872-98) was 25 years old when he died in the Hôtel Cosmopolitan in Menton in the south of France, following an artistic career of less than seven years. In 1879, he had been diagnosed with tuberculosis, a disease he battled throughout the rest of his life. With a passion for writing and illustration even in his school years, Beardsley began his working life as a clerk in London. In 1891, he saw James McNeill Whistler’s Peacock Room murals and became fascinated with Japanese art. That same year he was encouraged by Edward Burne-Jones to attend Westminster School of Art after showing the older artist his portfolio of drawings. Burne-Jones pronounced: “I seldom or never advise anyone to take up art as a profession, but in your case I can do nothing else.” 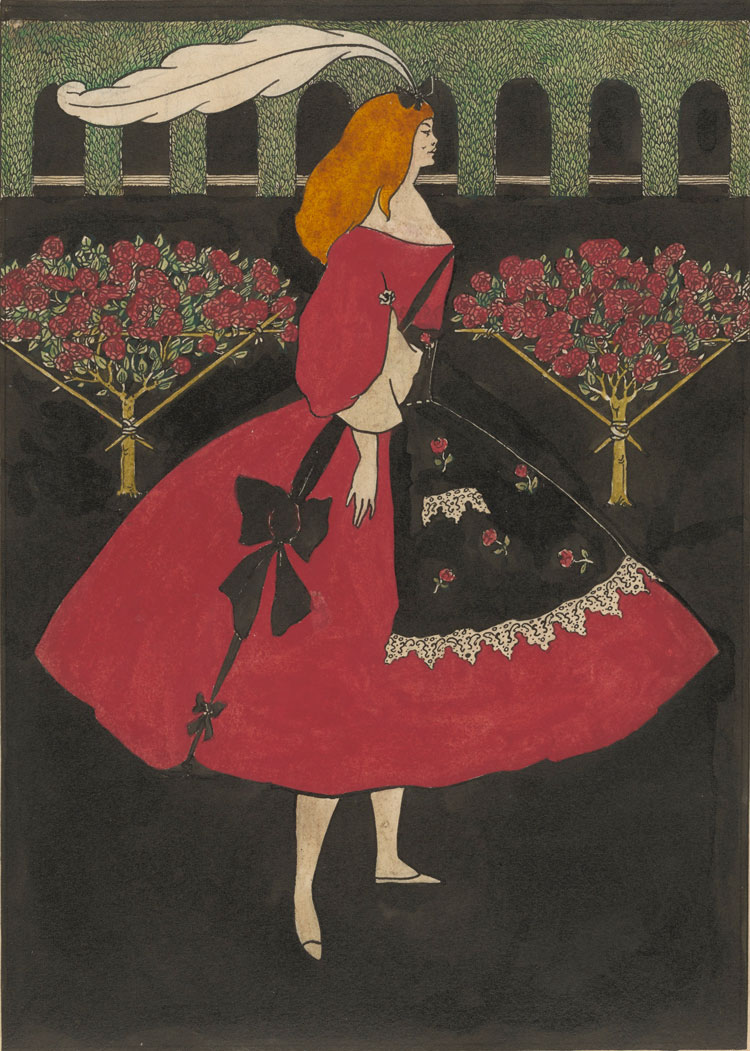 In 1892, commissions to illustrate Thomas Malory’s Le Morte D’Arthur and three volumes of the Bon-Mots series allowed Beardsley to leave his clerk’s job behind him. The commission for illustrations for Le Morte D’Arthur saw him produce more than 350 drawings over a period of almost two years from autumn 1892. His drawings were reproduced using a new method of line block printing that employed the photographic transfer of images. This technique was perfectly matched to Beardsley’s use of fine lines and large, flat areas of black.

His prowess as an illustrator of some repute was recognised in the first issue of The Studio in April 1893 when Joseph Pennell’s article on Beardsley’s work spanned six pages with illustrations. Pennell praised Beardsley’s work as “quite as remarkable in its execution as in its invention: a very rare combination”. The article essentially launched Beardsley’s career. Just five years later, in 1898, his obituary would also appear in The Studio. 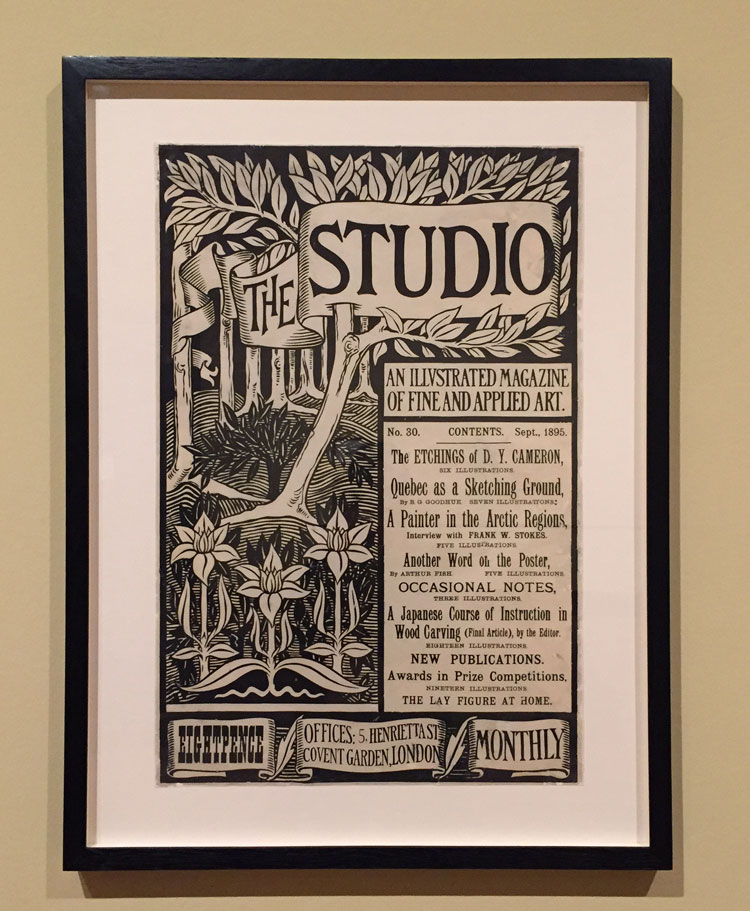 Poster for ‘The Studio’, 1893. Lithograph and letterpress on paper. This poster for The Studio magazine simply re-uses Beardsley’s design for the cover. Photo: Emily Spicer.

Beardsley’s interest in Japanese visual culture is not surprising, as he had grown up surrounded by the European craze from the 1860s for all things Japanese. Along with Whistler’s Peacock Room, Japanese woodblock prints were an important influence. In images such as La Femme Incomprise (1892), he looked to other Japanese sources, too, such as lacquerware. 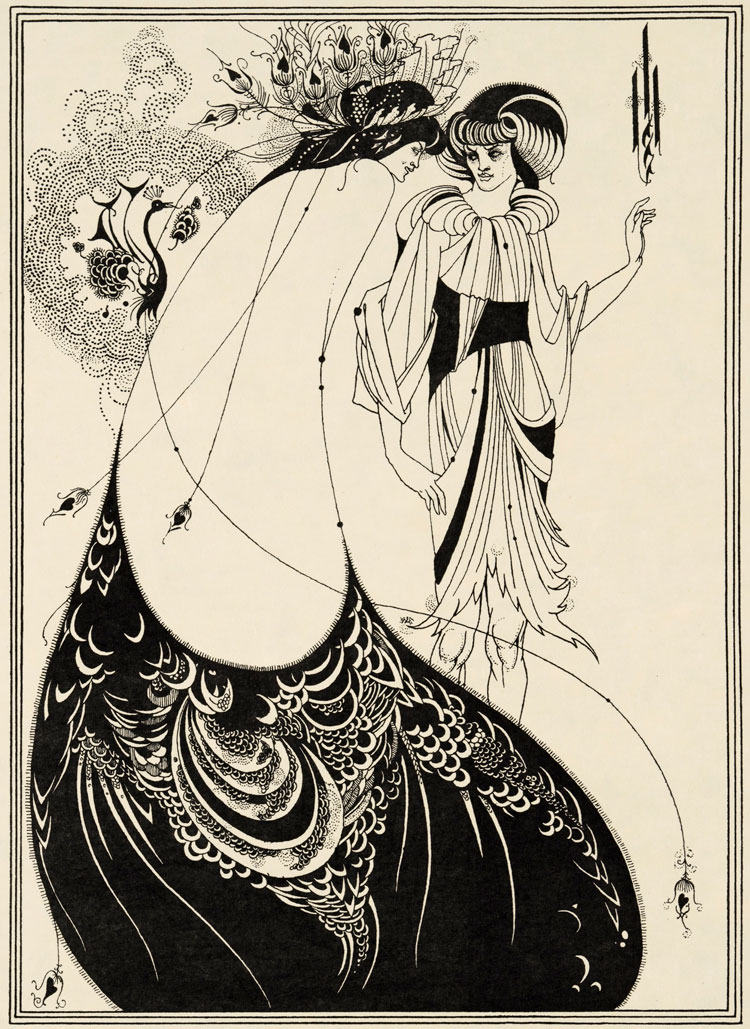 Themes of sexuality, death and desire permeate Beardsley’s drawings of 1892 for Oscar Wilde’s play Salomé. When the images were published in the English translation, they caused a sensation. Beardsley travelled to Paris that year and was excited by the posters he saw around the city. Two years later, in 1894, the first English exhibition of posters was held in London. Jules Chéret and Henri de Toulouse-Lautrec showed their posters alongside others including Beardsley’s The Pseudonym and Antonym of Libraries. 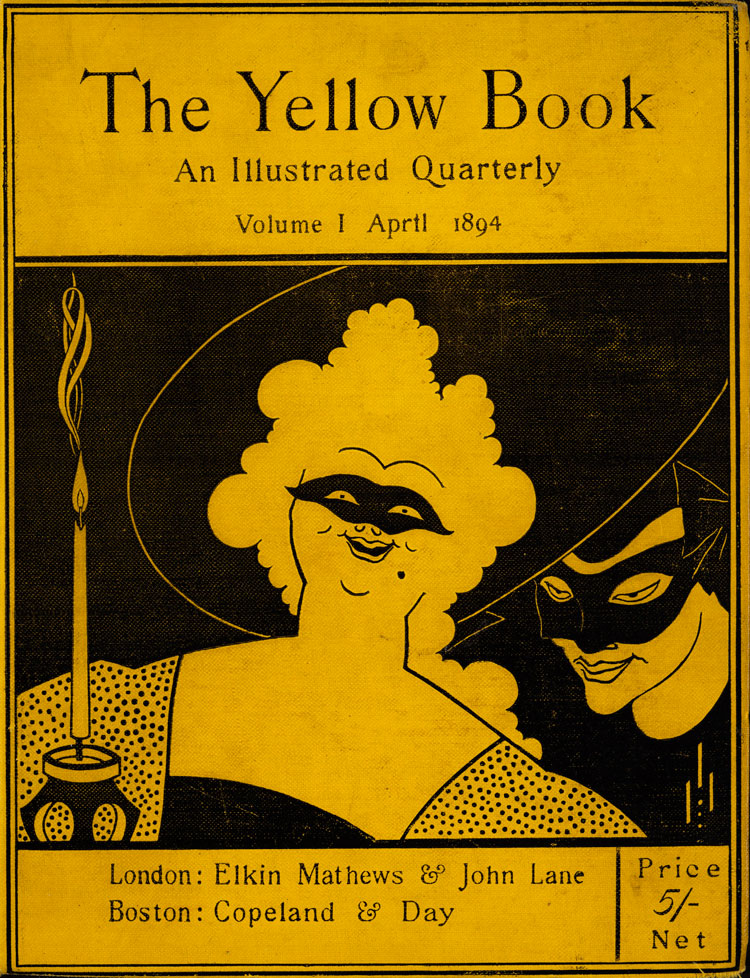 Publications were key for the dissemination of Beardsley’s work; none more so than the magazine The Yellow Book, which gained its avant garde reputation thanks to Beardsley’s bold and daring drawings. However, following the trial of Wilde for “gross indecency” and Beardsley’s known connection with the playwright, The Yellow Book’s publisher, John Lane, sacked Beardsley. When a new magazine, The Savoy, was launched in 1896, it took on Beardsley as editor. In his illustrations for Lysistrata (1896) and Volpone (1898), he further investigated his captivation with eroticism and the absurd. 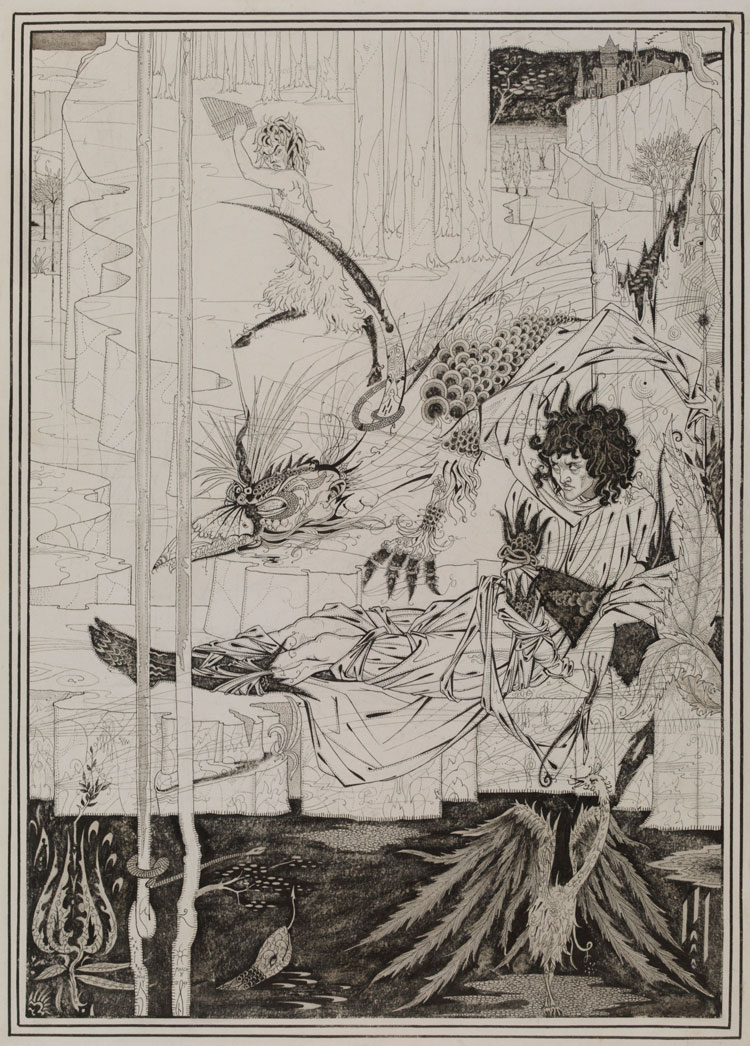 In the summer of 1896, Beardsley produced some of his most sexually explicit drawings. These are displayed in a separate space in the exhibition, with a warning for viewers. The preponderance of huge male penises that have to be lugged around by their owners appears more comedic than offensive.

Beardsley began to search elsewhere for his inspiration and even explored new media. In his illustrations for Alexander Pope’s 1712 epic poem The Rape of the Lock in 1897, Beardsley looked to 18th-century French copperplate engravings and the intricacies of line that suggested to him. Equally, he was captivated by the paintings of Nicolas Lancret and Jean-Baptiste Pater. The resulting illustrations in The Rape of Lock were so intricate that they were described as “embroideries”. When it came to illustrating Théophile Gautier’s 1835 novel Mademoiselle de Maupin, in 1898, Beardsley deployed watercolour in his drawings to produce a softer more decorative style.

The exhibition closes with a look at Beardsley’s continuing influence after his early death. In the immediate aftermath, many artists and illustrators tried to imitate his style and some of their works are gathered together in this exhibition. But it was in the 1960s, this exhibition claims, that Beardsley’s style emerged afresh. It is not difficult to imagine the huge popularity of the 1966 Beardsley exhibition at the Victoria and Albert Museum in London and Beardsley’s influence on 1960s fashion and design, particularly record cover designs for Procol Harum and The Beatles. 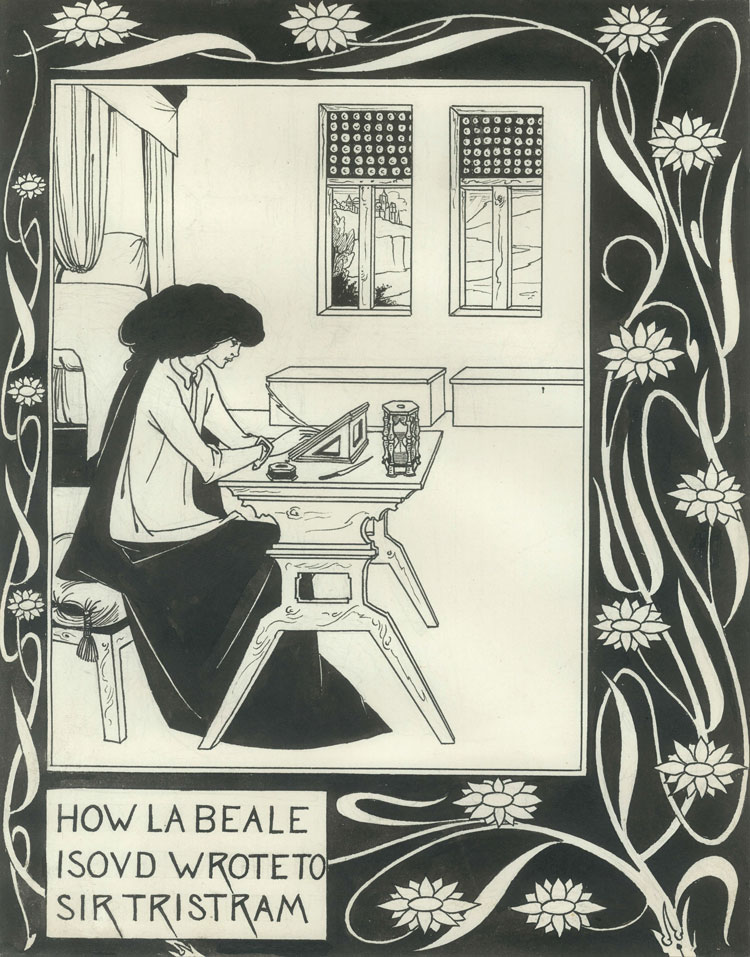 Perhaps the biggest surprise of this exhibition is the realisation of quite how prolific Beardsley was in his short life, even while quite ill. The number of illustrations he produced is staggering, his range of inspiration intriguing and his increasingly grotesque and explicit figures astounding. His self-portrait of 1892 is haunting, prophetic of his impending early death. From the exquisite lines of How la Beale Isoud Wrote to Sir Tristram (c1893) to the fantastical The Lady with the Rose (1897), Beardsley never ceased to produce images that are technically accomplished and designed to provoke. The image that stays with me from this exhibition, however, is Fredrick Evans’s Portrait of Beardsley (1893) – pale, foppish and averting his gaze, the young Beardsley rests his chin in his hands while managing to project the very essence of a fin de siècle artist. Wonderful. 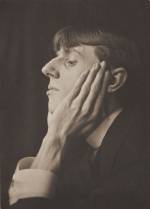 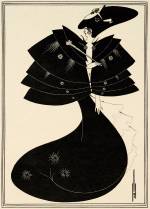 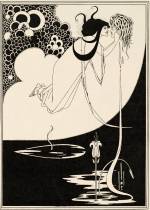 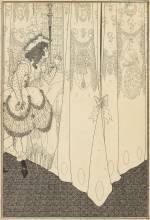 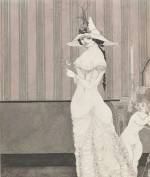 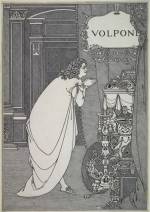