In this enterprising move, long-term architectural publisher Axel Menges (whose list running from the 1970s, currently extends to more than 240 titles, many now of historic value) has expanded his new film list with this volume of theory and critique, based on five fully worked case studies.

Through these, the author Konrad Kirsch investigates the fundamental layering of five films by four directors. The earliest example justifying this “second look” is Alfred Hitchcock’s famous 1963 film The Birds. As Hitchcock himself notably said in a key interview in the New York Times on 29 October 1950: “The chase seems to me the final expression of the motion picture medium.” A contemporary film historian of that era, Siegfried Kracauer, commented in his 1961 book, The Nature of Film: “Thrillers have satisfied [Hitchcock’s] demand in two ways. Their suspense-laden sleuthing processes cause a stir in the region of psychophysical correspondences and thus challenge him to indulge his uncanny sense of the interplay between moods and surroundings, inner excitation and the look of objects.”

Kirsch is able to fast-forward actual film criticism of the half-century, first by examining Hitchcock’s film oeuvre thoroughly and to a scope not foreseen in Kracauers’s basic and essentially modernist critique. The Birds is, accordingly, closely deconstructed to the extent that Hitchcock’s own awareness of such allegorical narratives as, for example, represented by the Renaissance painter Sandro Botticelli’s Venus (not seemingly so reconcilable at that time), is admitted and now revealed. The vicissitudes of the film’s heroine, and the enmity she suffers throughout, is measured against her suitor’s inadequacies, while crazed birds in the fragile timber house besiege both. Kirsch traces out the full narrative and its historical referencing convincingly. The Second Look with this first case study now reveals the deeper meaning devised by Hitchcock: one that conforms with his regular characterisation of threatened females who somehow retain power over adversity. At a primary level, of course, Hitchcock was always a modernist (viz. his North by Northwest). But in The Birds, true to form, he constructs an escalating trajectory as the enfolding primary drama, epitomised by the raucous cacophony of the crazed flocks of attacking birds – seagulls, crows, sparrows even. Only the two caged lovebirds that the Venus-like heroine has brought for delivery (first covered up) to the house in question can actually offer a remotely possible clue to this violent anathema of the local birds. As with many Hitchcock environments, the carefully chosen, somewhat isolated house in the San Francisco Bay area that she has to visit has a bleak and ominous appearance as the birds foregather to assault the humans. Environment is a critical factor, as always with Hitchcock, and instrumental to outcome, but not incidental. This is, of course, a common factor with Hitchcock’s genre, as evident from Rebecca (1940) to Rear Window (1954) to Vertigo (1958) to North by Northwest (1959).

Blake Edwards is the director of Kirsch’s second film case study, The Party subtitled “lustration” of the world (Die Reiningen der Welt). Made in 1968, the film is close in time to both The Birds and North by Northwest. But here, for Edwards, suspense is not a major motivating factor. Indeed, his film is essentially a comedy, a satire on the film business, albeit with a tinge of remorse at its core. Kirsch categorises it as a film “on the side of the outsider”. The presence of Peter Sellers as the lead character virtually guarantees the audience appeal of this “comedy of errors”, although Edwards plays with the reversibility of the narrative, a subtle structural ploy, in effect.

Interposing the fourth study film, Anatomy, by the Austrian director Stefan Ruzowitsky, adds a somewhat Germanic element to the particular genre of  “horror and slasher” films that Kirsch recognises as a clear category: it was completed by the year 2000. It is not intended here to constitute any common principles with the works of Hitchcock, Ridley Scott or Edwards, but it corresponds similarly within any postmodernist reappraisal. In this taxonomy, metaphorically, the accompanying “baggage” is not confused or “lost”, and broader categorisation is thus avoided. For example, this activity corresponds to the attempts made by architectural critics to apply such ready generalities as hi-tech to buildings that contain rather more complex references (on a similar level to Hitchcock’s Aphrodite/Venus inspiration in The Birds). For example, the ongoing critique of the buildings of James Stirling is a classic case here. For Hitchcock’s referencing of Botticelli’s Venus, in effect, read in Stirling’s 13th-century BC Mycenae Lion Gate postulation at the Arthur M Sacker Museum, Harvard University main entrance (which interestingly is included with glass doors apparently derived from Alvar Aalto’s 1934 Viipuri Library (now in Russia). A reference in hi-tech? In the postmodern, there is many a trap for the unwary critic.

Scott’s now renowned Blade Runner confused or upset critics, in equal measure, as late as 2007 when distributed in a final cut. Blade Runner’s nostalgia, as Kirsch shows, is indeed one for the past, eg film noir. Scott describes his filmic method as one of “layering”, which explains the welter of references, all meticulously sourced here, which emerge in detail. Postmodern architects likewise delight in presenting such a proliferation of historical sources, which focuses on every level of visual scale occurring, from significant detail to open facade to spatial derivative or its denial. It is significant that Kirsch comes from a literary background himself, but is fully aware of historical transition, simulacra and meaning so often replicated in that field.

The fifth and last case study is Scott’s Gladiator; this work represents a visual inquest of the Roman idea – imperial grandeur in a welter of corruption and decay. The Coliseum, for example, is treated with a model. There is an effort to de-romanticise history after the fantasy elaborations of the 19th-century historians and the so-called “history painters” of ruins and legendary conflicts. Scott explains that he is, in effect, just portraying the contemporary world. That transference is accomplished with impressive accuracy. Political convolutions and rivalries mirror our own time: oligarchs are prevalent. Christianity does not figure. Here, film is forecasting a decline in democratic politics, although there is a quantum of secular morality. Gladiators play out these motivations in the Coliseum, at second hand, “on pain of death”. Powerful visual dramatics complement the impressive staging of the Coliseum. It is clear that Scott is applying an historical corrective to a film genre, and to the distorted narrative and visual representation over two centuries which he believes had in reality lost its meaning.

In all, Kirsch has provided a superlative model for assessing the divisions of contemporary film thematics. First, the suspense drama: second, the comedy or satire; third, new science fiction; fourth, the “slasher-horror” typology; and finally Kirsch returns to a kind of revisionist realism, essentially an historical and rigorous corrective. In postmodern culture, the current parameters are open, the connections random and the galaxy infinite. What is interesting in comparing film critique today with actual contemporary architectural comment and analysis is the extent to which each can benefit from an informed comparability between both fields and it is to be hoped that the overlap can be more openly fostered in future. This volume is a useful, perhaps indispensable, contribution to the wider postmodernist debate pursued in film, a field still barely represented in recent museum and gallery exhibitions: but it is now humming for sure with both students and schools, in this world of instant electronic referencing and accessibility to other precedent and text. 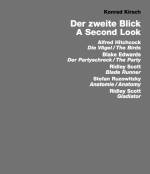