In her latest film, Cork-based artist Ailbhe Ní Bhriain uses the perpetual ebb and flow of water and clouds to dissolve the physical integrity of highly constructed cultural institutions 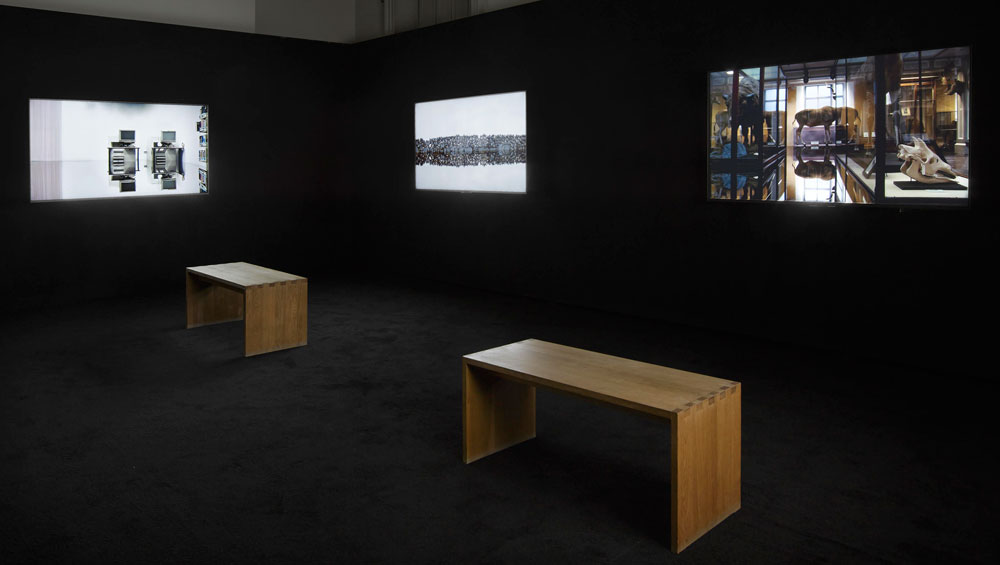 Seeing a face in a cloud is a typical example of pareidolia – a psychological phenomenon where the mind imposes order and meaning on an experience where there is none. Using a combination of video recording and computer-generated image, there is a similar pareidolic slippage of form, meaning and reality in Ailbhe Ní Bhriain’s Reports to an Academy (2015), the focal point of the artist’s exhibition at Domobaal, London.

The four-screen film installation depicts four discrete locations: a library, a natural history museum, a typical west Ireland landscape and an artist’s studio. Although the geography and function of these places are widely disparate, Ní Bhriain implies each is as highly mediated as the other. In the library, books are rigorously alphabetised and cross-referenced by subject matter; second, with its Victorian cabinets of curiosities, packed full of the world’s fauna, Dublin’s Natural History Museum is steeped in British imperialism; third, while the images of dry stone walls epitomise bucolic life, these particular walls belong to a vast, densely populated, network of walls demarcating land ownership, spanning much of the Aran Islands (off Ireland’s western shore); similarly, although the studio is customarily conceived as a space of creative freedom, a cynic might argue that the sanctity of the studio is sustained by deep-pocketed white-cube investment.

A host of incontrovertible political and economic factors determine cultural production (of every kind) and, in the four films, that system’s omnipotence is signified by the ubiquity of computer-animated birds. There is an owl, a raven and a finch, but the hooded falcon perching on a vitrine in the museum has special relevance to ideas of institutional critique. For its connotations of dominion and supremacy, the artist Marcel Broodthaers employed the eagle – a bird similar to the falcon – as a symbol of the authority of museums. In 1968, he established a mock museum in Brussels in which every object bore the image of an eagle, signifying every art institution’s power not only to bestow value but also to impose equivalency over its collection. Both Broodthaers and Ní Bhriain represent birds as a stamp of cultural exchange value but, in Reports to an Academy, the suggestion is that this economy goes beyond the museum, including libraries, studios and even nature.

Ní Bhriain’s work has a deeper, more complex layer; it highlights the cultural economy and simultaneously places it in crisis. To get to the film installation in Domobaal, the visitor must pass through the foyer and go up the stairs where hang five photographic collages from a series of 11, called Inscriptions (2017). The works depict fragmented marble statues; sections of the images appear to peel away, deconstructing the photographic surface as well as representing the museum in a state of dilapidation. Likewise, in Reports to an Academy, a catastrophic, computer-generated flood devastates the four culturally prized locations. However, this moment of crisis also offers new possibility. As in Ní Bhriain’s 2004 film Immergence, where plumes of ink floating through water disrupt the film’s spatial cohesion, the water filling half the screen in Reports to an Academy provides a rippling reflection, presenting a second, more protean image. Indeed, water appears in every state: simulations of bubbles, clouds and miniature icebergs drift across the screens, destabilising the physical integrity of these highly constructed spaces, but also merging the real and virtual.

Any meaning and order these cultural institutions establish is dissolved by the constant ebb and flow of water. Moreover, the viewer’s perception of reality becomes increasingly protean while watching Reports to an Academy. On one wall, two monitors are set up adjacent to one another; the other two are installed in perpendicular on opposite sides of the room, such that the viewer’s vision is perpetually split between what presents itself in front and what appears at the peripheries. Flicking between screens, the viewer struggles to identify the gradual mutations in each image. It is as if the films resist fixity, as if the moment the eye diverts attention, the image changes; in much the same way that the instant a face appears in a cloud, it is then blown away or lost among other forms. In reality, cultural institutions are rigidly determined by economics and politics, but in the suspended fantasy realm of Reports to an Academy, Ní Bhriain conceives – literally and figuratively – a parallel, post-diluvian world in which the rules and order of such places dissolve away.

The exhibition was organised in collaboration with The Dock, Carrick-on-Shannon, Leitrim, Ireland. 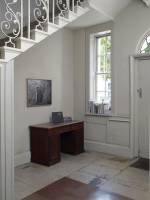 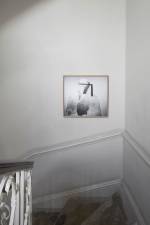