Abou Farman: ‘I want the tragic to become an acceptable space’

Abou Farman: ‘I want the tragic to become an acceptable space’

Abou Farman, who co-wrote Icaros: A Vision with Leonor Caraballo, talks about the film, which is based on Caraballo’s exploration of shamanism after she was diagnosed with cancer, and coming to terms with her death 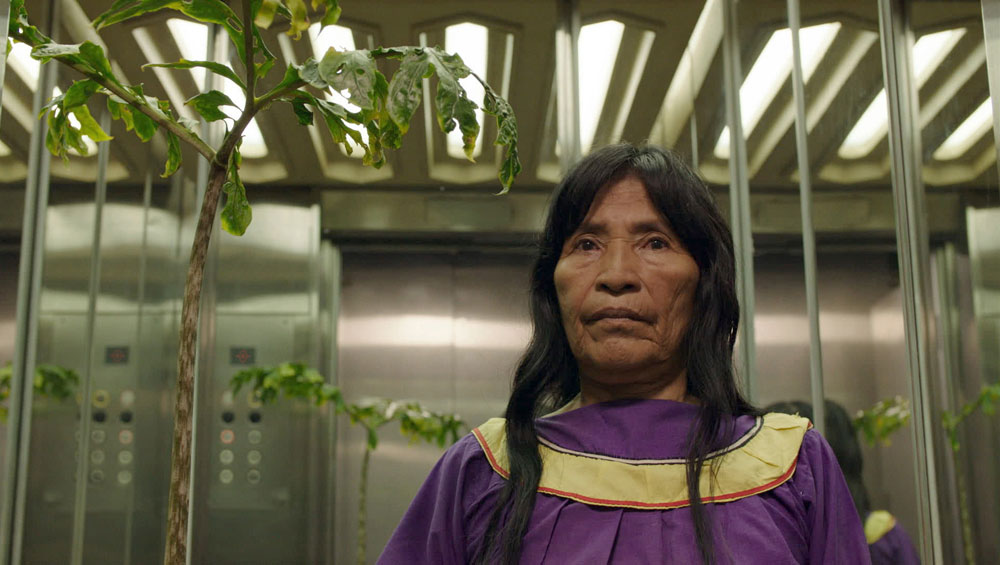 Lurdes Valles Vargas as mother with the plant or the plant with the mother in Icaros: A Vision, courtesy Conibo Productions © 2016.

The film Icaros: A Vision (2016), directed by Leonor Caraballo, is not a drama with a clear narrative thread nor is it a documentary, but something in between, a kind of existential meditation, an elliptical memoir, and a quest for meaning in the face of death. Its construction is fairly straightforward, at times even laconic, despite some striking hallucinatory scenes. Nonetheless, or perhaps because of that, it is also riveting as it quietly weaves its potent, idiosyncratic alchemy. Much of the storyline is based on the relationship between Angelina (Ana Cecilia Stieglitz) – who seems to be director Leonor Caraballo’s surrogate, suffering from an unspecified ailment – and Arturo (Arturo Izquierdo), a young shaman who is losing his eyesight. And not incidentally, the word icaro means magic, alchemy in South American indigenous vernacular. It also recalls Icarus, the son of the mythological Greek inventor Daedalus, who flew too close to the sun in the wax wings his father had devised for him and was killed, a fable usually associated with hubris but which might also be interpreted as aspirational, and all-too human.

The co-director was Matteo Norzi, and it was written by Caraballo and Norzi with Caraballo’s longtime collaborator and partner, Abou Farman. It takes place in Peru’s Amazonian jungle, at the real-life Anaconda Cosmica, a healing centre. After a diagnosis of cancer, Caraballo explored alternative medicines, eventually finding her way to the Amazon and to ayahuasca – an ancient Amazonian hallucinogenic brew – and its healing rituals. She died in 2015, before the film was finished. Completed by Norzi and Farman and shown at the 2016 Tribeca Film Festival, it is now on commercial release.

The following is an excerpted and edited conversation between Abou Farman and Lilly Wei.

Lilly Wei: Could you tell me a little about the origins of the film, Icaros?

Abou Farman:  Every time you tell an origin story, it changes; origins are always made up. This time around, I’ll start with the cancer project. That’s when we started branching out and working with shamans and shamanism. We did a series of prints where we took a 3D print in wire mesh and projected it on the wall. We asked a shaman to describe what she saw – what kind of animal figure – then we went back with that same wire mesh to the computer and saved it, then squeezed and stretched it into the animal the shaman described. That was our first artistic work in collaboration with shamans.

LW: Was it in part because of Leonor’s cancer?

AF: Well, in fact, all of it was because of Leo’s cancer. We began to explore alternatives to western medicine. The truth is that hospitals aren’t strictly staying within the confines of western medicine, bringing in all sorts of treatments; everybody in the cancer wards explores beyond chemotherapy and radiation. For Leo and me, it was taking control and not just being passive recipients of either the disease or the medicine.

LW: Did Leo have a problem with the usual treatment?

AF: No, the initial stages seemed very clean and everyone said it was out, nothing to worry about. But no one really knows. All cancer diagnoses are based on probabilities. They say nothing about your particular body, just a collective body.

LW: I’m always sceptical when I hear the word “cure” when referring to cancer. It seems to me the best outcome is that it will stay in remission for a long, long time.

AF: I don’t know that anyone used the word cure to Leo, but after the surgery, everything seemed fine. She took her pills; she was working. But it was in there, waiting for an opportune moment. She had five years.

AF: It was always part of our life after that, even as the threat seemed to recede. But our consciousness was informed by it, our relationship, and our work. Every once in a while, we’d say we’re fed up with this work, let’s do something else.

LW: And when did it begin?

AF: The first diagnosis was in 2008. After we went through that harrowing period, we started almost immediately to work on the cancer series, showing them from 2010 through 2012, but the way we got into the cancer project was the realisation that the hospital-based treatment, while on an anaesthetic modality – the opposite of an aesthetic modality – would allow the aesthetic mode to burst into the clinical setting, into reality every once in awhile. That’s what happened when the radiologist was showing us the images of Leo’s cancer. She wanted to see them. Everything for Leo was aesthetic, including this. She needed to see them; the reports meant nothing to her. So the radiologist took us to the back room and there was an amazing screen. We got into it, the radiologist got into it, and at some point, as she was navigating the space of the breast, she said: “This is so beautiful.” Then she pulled back, and said: “I’m so sorry.” And Leo said: “No, it is beautiful” and that’s how the tumour project started.

LW: Then you went to shamans?

AF: Yes, and from there we started exploring ayahuasca as well. Leo went on a trip with Matteo [Norzi] to Peru, to the shaman she wanted to work with; that was in 2012. She immediately started working with the Shipibo-Conibo women, indigenous to the region. Several things happened on that trip. On one of the ayahuasca journeys, Leo said she saw her own death; this was before the cancer returned. And another was how close she became to the Shipibo women and their art and their healing chants. She wanted to do something with them, so she decided to make a film. When Leo and Matteo came back, they asked me to work with them on it. I had done films on other productions, so I said: “Yes, let’s do it together.” On the third trip to Peru, she felt some pain, and she knew right away that it was the cancer. When we came back, tests confirmed it. With breast cancer, when it metastasises, there is nothing you can do but buy time. It basically becomes about time. Time comes out of the body. Your body starts ticking with the sound of its own end.

LW: And the film project?

LW: You told me at one point that Leo was terrified. She was still so young, with so much ahead of her. Did she, did you both resolve that somewhat? Did making the film help?

AF: Yes, it was terrifying at the beginning and when the cancer metastasised, it was definitely terrifying. But Leo wasn’t someone who shied away from confrontation, or someone who remained terrified. I think getting over the terror was a long process and involved both the making of the film and her relationship with shamans, with ayahuasca. Part of it was trying out all these things, not as a way of finding a miraculous cure but as an exploration, of taking over. It was an artistic performance, this exploring of all the different spaces, all the different types she encountered. The attitude was, let’s try this, following a trail all over the city, and some of it was fascinating and not just as a cure, not just about feeling better or not. It became a creative act, an exploration and experimentation with the spaces of her body, with new forms of knowledge – it all became part of the experiment. It wasn’t for public consumption, but towards the end, we had an idea to bring together these 50 or 60 practitioners who knew Leo’s body and her cancer into one room. We started talking about how it could appear in the art space.

LW: You also said that, because of the arduousness of the project, it might have shortened her life. Was it worth it?

AF: It did, but I don’t know that you can do that kind of weighing; you can’t ask that question. You just keep going. We had already started on the film, started writing it, and were in pre-production, and the question always was, should we go ahead? Leo did think of turning back, but she didn’t. She didn’t want to just wait for death to take her; she wanted to do.

LW: And then it came back fast?

LW: You and Leo and been working together for a long time.

LW: What was your contribution to the creation of Icaros?

AF: It was a three-way collaboration. Leo and Matteo directed; I co-wrote it with them, but it’s hard to say who did what. I was deeply involved in the editing after Leo died. After the first rough cut, it took another eight months for us to get it finalised, and then it debuted at the Tribeca film festival last year. For me, there is always a sense that I’m continuing to work with Leo. I think a lot about what that means, in a literal sense, that somehow she is in my body and space, and much more of a presence then just a thought about what she might think.

LW: Could you give a brief synopsis of the film?

AF: It’s about a patient who, having exhausted her options here, goes to the Amazon, not knowing exactly why, looking for a miracle, perhaps, but also to explore shamanism. She encounters a young shaman who learns that he is going blind. The encounter between the two of them is developed through a sequence of hallucinations that tell her story, his story, the film’s story. She learns to locate and confront her fears and he learns to live with his eye affliction, to become more serious about shamanism, no longer only an apprentice at the end. All the hallucinations are of our older artwork, including the cancer visuals. It’s a dedication to a relationship.

LW: Some have considered the ending to be open-ended. Do you agree?

AF: Essentially, the question is: does she die or not? It might be open-ended to some, but I think it’s pretty clear. What’s really open-ended is the question of what is death? What elements remain? That’s the question Matteo and I live with – after Leo’s physical death, what survives?

LW: And what do you think survives?

AF: I’m interested in practices based on reincarnation, ghosts, and other belief systems that do not use a scientific language, that are more metaphoric, and in taking those practices seriously in a space and with a language that is not saying it is metaphoric or delusional. I want to explore what it means for me, to find out what might survive. I want to take it seriously, not as some characteristic Christian delusion, but what it means to have an ongoing relationship with the dead that is ethical, rather than separating the living and the dead in which the living go forward in time and the dead do not. Can we think of the afterlife as this life, right here?

LW: What did you learn from making Icaros? Was that one of the things you learned?

AF: I learned that things can be very messy and unresolved and the film is not a kind of redemption. When the film came out, the truth is that I was very emotional because Leo was not here. It was a triumph and tragedy at the same time. They are deeply entangled and I can’t separate them so I’m learning to live with those two together. I want the tragic to become an acceptable space. 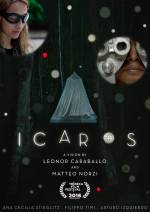