Anishinaabe expressionist artist George Morrison (1919-2000) was born on the Grand Portage Indian Reservation in Minnesota, but his quest as an artist took him far, both literally – he  studied in France, Italy and Spain and at the Art Students League of New York, painted on Cape Code and taught at the Rhode Island School of Design – and figuratively – he became friends with Jackson Pollock and Willem de Kooning and other prominent action painters and abstract expressionists. While his aesthetic drew on their modernist vision, he embraced nature as his religion, inspired by the rocks, trees, woods and wide horizon surrounding his birthplace as well as his people’s legends. Modern Spirit: The Art of George Morrison, a touring retrospective of his exquisite paintings, elemental totemic sculpture, and drawings and prints, highlights the romantic, spiritual dimensions of his art. 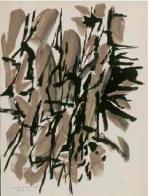