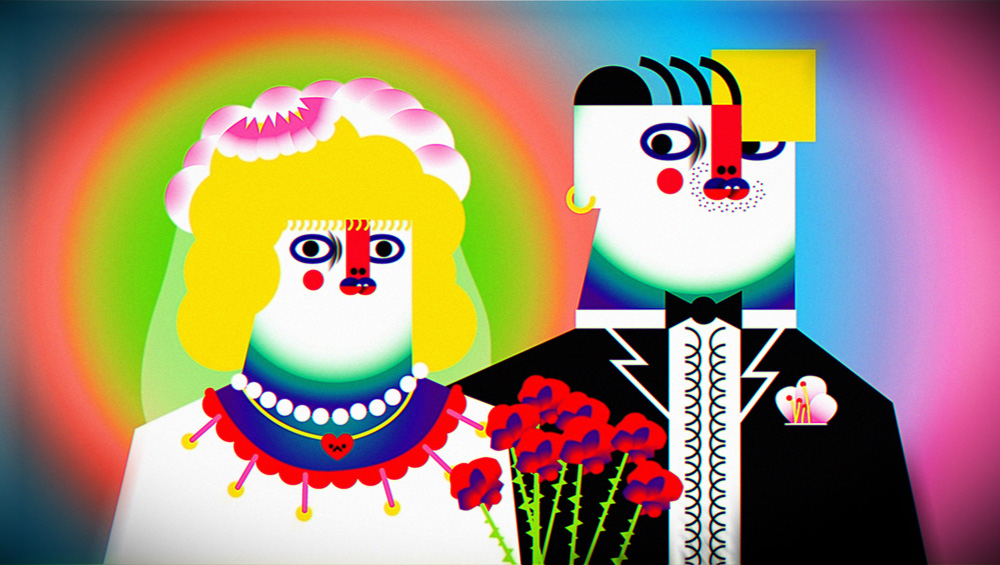 Blow-up installations, primary colours and bean bags at Wong Ping’s exhibition Golden Shower, at the Kunsthalle Basel, will lull you into a false sense of security. Red-lipped plastic mouths line the walls, an animation plays up ahead, while a couple of children careen through the gallery, hanging off benches and returning to their parents every few minutes.

Yet don’t be seduced. On approach, the red mouths have voyeuristic googly eyes and sinister-looking gold teeth; a central column in the space hosting several video screens is actually a massive penis wrapped in glitter; and the friendly crowd of Chinese “lucky cats” wave penises instead of paws. Within a few moments, you will realise that those animations with their bright colours and basic shapes tell stories of graphic sex, twisted violence and the vulgarity of contemporary society. 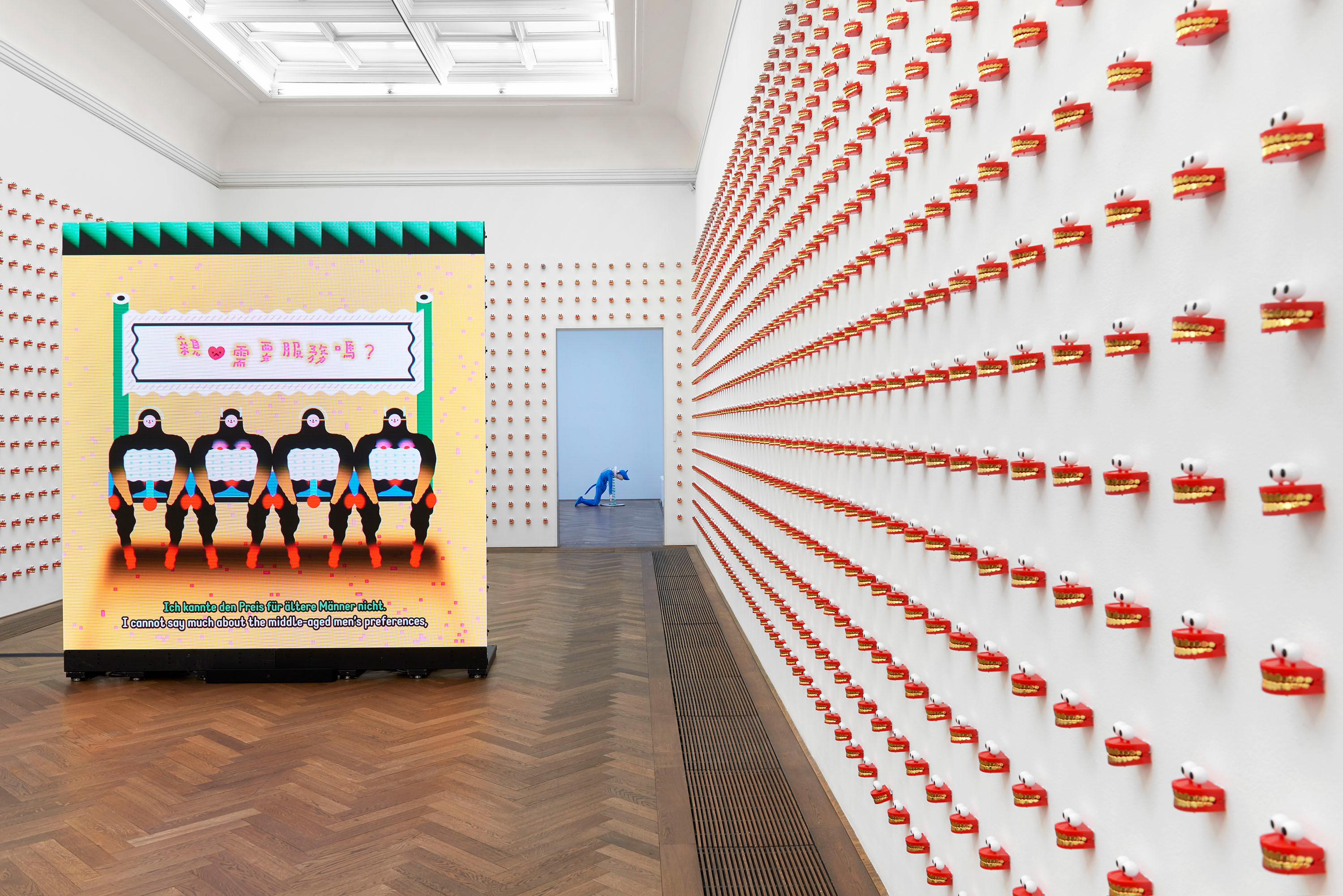 Fairly soon, you will feel as if you are trapped in a horrible arcade game where fun has gone wrong, and even just being there – walking across the fluffy carpet or sitting on one of the yellow bean bags – feels disgustingly participatory.

Welcome to the world of Wong Ping, the Hong Kong-born animator who plays with childlike aesthetics to throw you off into a sexually explicit adult world of misguided morals. Born in 1984, he is one of those mid-range millennials who grew up sheltered by the safety of analogue, and came of age as the internet took off. Soon social media followed, and society shifted off-kilter as contemporary plagues of loneliness, trolling, isolation, narcissism, depression and anxiety began to set in alongside the rise of technology. 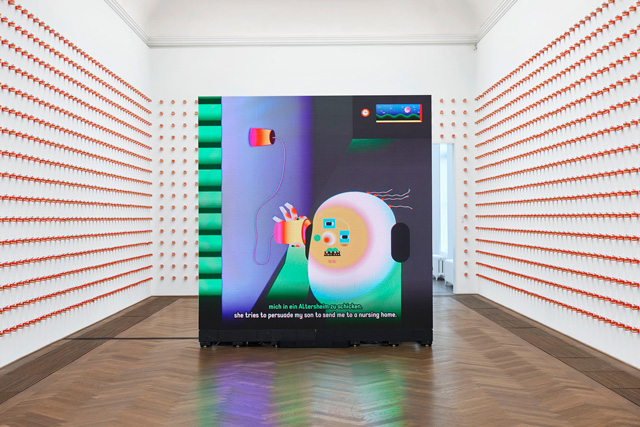 Wong’s characters are all caught here, attempting to swallow the shift, yet somehow drowning in the struggle of it. The main character in Dear, Can I Give You a Hand? (2018) is unhappy that his treasured porn videos are now digitised. He dislikes separating his rubbish for recycling; is perplexed by gender fluidity and overwhelmed by avocados available anywhere, all year around. The absurd story continues, and when the character dies, his family take him to an online cemetery to deposit him in a digital tomb. When the Qingming festival comes around, a day in China where people visit the graves of their ancestors, his son forgets the login and password cemetery – a contemporary malady if there ever was one. 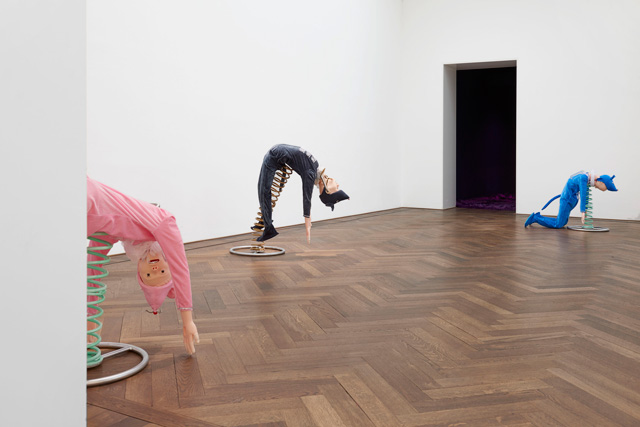 Originally trained as a designer, Wong began to work at a television studio while writing and experimenting with drawing and animation in the evenings. An animation for a friends’ band was his ticket to success and soon he became the darling of the Miami art world, with representation by the Edouard Malingue Gallery, Hong Kong/Shanghai, a slew of group shows and an exhibition in 2018 at Solomon R Guggenheim Museum in New York. Here at Kunsthalle Basel he presents a range of his previous works and a new work, a giant inflatable called Rabbit 3 in 1 (2019), commissioned by the institution for the show. 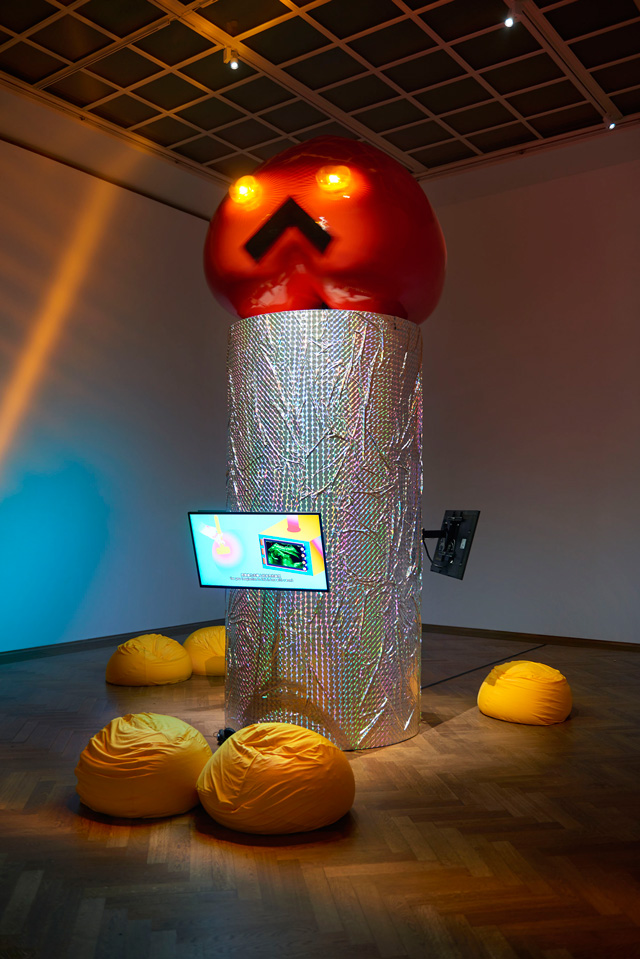 Wong is the king of his own animations, from concept and creation to his monotone Cantonese voiceover that puts the “dead” in deadpan, even though his productions are credited to the Wong Ping Animation Lab. Layered sounds echoing the audio effects of point scoring and failure employed by video games, on top of jerky movements and a patchwork of basic shapes, completes his 1980s-style flat-cartoon aesthetic. His language of “modern grotesque” is a cross between George Grosz and Niki de Saint Phalle in computer-animation form.

The animation’s aesthetic desensitises its mature subjects, allowing societal limits to be pushed further – rather as adult cartoons did, with the dark humour of The Simpsons in the 90s, or, more recently, the violence of Rick and Morty and the depression in BoJack Horseman. Yet, unlike these examples, Wong’s aesthetic is closer in comparison to Peppa Pig, making his work stranger and more confusing still when he rolls out the graphic sex scenes. 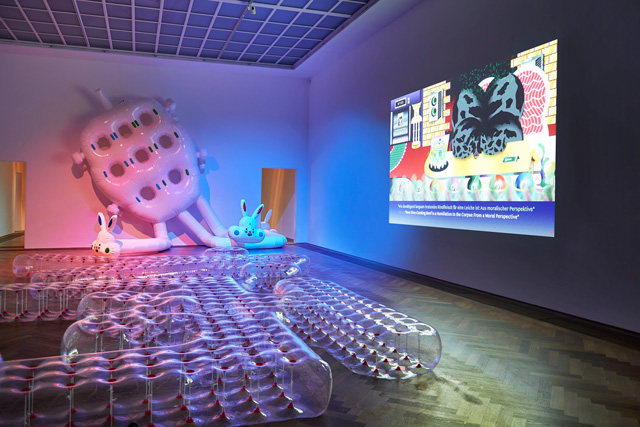 While the animations hinge on a total descent into perversion, there is always a moral story or a struggle, layered deep. In Jungle of Desire (2015), the protagonist wrestles with his masculinity in an age of modern female emancipation. When his wife desires to work and becomes a prostitute, the only person who can give her the perfect orgasm is a corrupt policeman. The story progresses, becoming unwatchable at the point when the protagonist describes his sexual revenge torture to the cop.

While the stories are bizarre, they also contain fantastically deadpan moments of dark humour. The Fables for the Modern Age are the start of a series of animations in which crazy animals tell didactic stories that critique Chinese culture, family values and the collapse of tradition. In Wong Ping’s Fables 2 (2019), the story is told by a female voice. She explores family relationships through the life of a group of triplets, who, in the quest for money, fame and success, compete and stab each other in the back, resulting in scandal and shame. 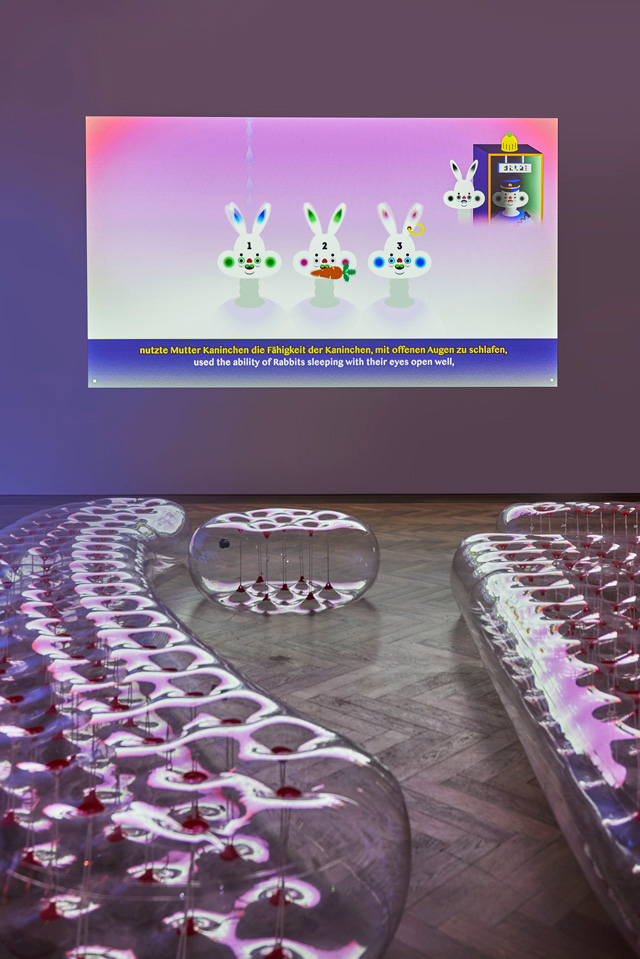 In every animation, fate is delivered in a matter of fact way – like a pixelated explosion and the words “game over”. We don’t feel much when the protagonist in Dear, Can I Give You a Hand? goes to hospital because ants enter his penis, he gets diabetes and has his legs amputated. And, if you are of a slightly delicate nature, it is very possible that you won’t make it to the end of any of these animations. These video works are grotesque and explicit in the most contemporary sense, yet Wong simply uses the tools that are accessible to him to express himself, and paired with this aesthetic, he somehow creates a mood, too – one of indifference. 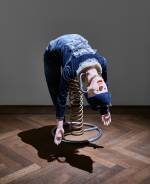