Vibha Galhotra: ‘I am a traveller, an observer of situations’

Vibha Galhotra: ‘I am a traveller, an observer of situations’

The New Delhi-based conceptual artist discusses the role of the environment in her practice, as well as the complex site-specific issues she chooses to explore

Vibha Galhotra’s work examines the state of urban development in India, particularly in relation to the city of New Delhi where she has lived for more than a decade.

Galhotra has been particularly sensitive to the impact of globalisation and growth on the natural environment, and her current exhibition at Jack Shainman Gallery in New York relates to the environmental catastrophes that have beset the Yamuna River – the longest tributary of the Ganges. With its tragicomic title, Absur-City-Pity-Dity offers the artist’s perspective on living so closely to such contamination through large-scale tapestries, ethereal resin-filled block sculptures and a short film, all of which are positioned around the central sculpture 365 days (2015). This work documents an extensive collection of water samples from the Yamuna amassed by the artist every day over the course of a year, accompanied by short texts written by her and local residents.

Galhotra (b1978) received her bachelor’s degree in graphics from the Government College of Arts, Chandigarh, in 1999, and her master’s from Kala-Bhavan, Santiniketan, in 2001.

Allie Biswas: The works in the exhibition draw attention to the ways in which the Yamuna River is treated. Can you explain how you initially became interested in this phenomenon, and how your interests evolved to form the foundation of the works?

Vibha Galhotra: I generally work on site-specific issues and situations in my practice. I was invited by an organisation called Khoj (International Artists’ Association) to collaborate on an initiative set up by an non-governmental organisation and a 24-hour news channel to clean the river. That was my first encounter visiting the holy river that crosses the city I live in. Seeing the poor state of the river really moved me to look into it more deeply. Just 1 or 2% of the river is where the actual course enters the city. To fully enter the city, though, the river gets merged with the city’s residential and industrial waste. It is misunderstood as a river: people still believe in the holy properties of the river and have their religious ceremonies around the riverbed. It is really more of a sewer rather a river, and this made me interested in this contradiction, or tension, between belief and reality.

AB: It must extremely frustrating to have to deal with such contradictory behaviour from those who use the river in this way. Have you ever witnessed such ceremonies taking place?

VG: I would like to recount a particular incident, which moved me in this direction of work: on a Sunday morning in winter, on my visit to the Yamuna, I was overwhelmed by the stench of sewage in the river. While I was engrossed with documenting the river, a couple began performing a ceremony for their ancestors at the banks of the river, which involved bathing in the “holy” river out of respect for their ancestors. I was shocked at their oblivion to the filth, as they stripped and submersed themselves in the water. But even more, I was filled with anger for their faith, and their complete irreverence towards something considered holy.

AB: What was the premise behind 365 days? It was a long-term project, as the title highlights, carried out over the course of one year.

VG: The work 365 days was a daily diary I maintained over the past year, of events, thoughts, behaviours, emotions, philosophies and actions that inspired me, made me happy, unhappy, angry, surprised, shocked, amused, frightened, confused, envious, overwhelmed, filled with wonder or acceptance, frustrated, depressed, ashamed, and so on … Each day that passed came with its own absurdities. Each work in this exhibition documents an actual event in a specific place at a specific point in time, determined from my own experience. This then became the ideological starting point. However, my attempt is not just to map my own reality, but, through it, the reality of urban life across the surface of the planet. I use materials we consume everyday, in order to re-evaluate our own behaviour. Similarly, the landscape, too, could be anywhere in the world. The work is not a comment on a particular landscape. I, through all this, am a traveller, an observer of situations that play out in a place I like to compare to the Theatre of the Absurd.

AB: A group of sculptures depicts residue or organic matter, such as vegetables and plants, taken from the river, which have been set in resin. Was this your way of documenting “evidence”?

VG: Yes, that’s correct. The vegetables inserted and placed within the gallery space create a surreal situation, as the innocence of the object makes the viewer question its presence in the gallery. According to the research data, these vegetables grown around the riverbank carry the most contaminated content for human consumption. But still they are consumed, as people are ignorant about the fact, and, also, there is no control over the production and sale of these vegetables in the market. So, in a way, humans consume the contamination, which reacts within their bodies in both visible and invisible ways. The actual violence does not lie in our seeing and grasping the direct, obvious, visibility of river slime. It lies elsewhere, in the under-layers of our bodies, as fruits and vegetables; we purchase, cook and digest produce that is infected by immense pollution. The dark slime is inside our guts, as the mutation of unimaginable viruses spawn within; there is internal evidence of our own crime.

AB: Destruction and loss form critical parts of this “crime”. Are you seeking to offer a specific perspective, perhaps one that is activist in its intention?

VG: I don’t wish to take that position of activist, as I am not. But I do wish to express my concerns through my practice. This current situation is that of my times, which needs great attention, and art gives me the liberty to talk about the subject in a more communicative way, with emotional and philosophical layering, rather than simply documentation. I like to play with the local in global specificity, as these issues need attention all around the world. Any country needs to pay attention to its ecological condition in order to save its economical, social and political situation.

AB: The tapestry works in the show are made entirely of ghungroos – small metal bells worn on women’s bodies in traditional Indian dance. You have been working with this medium for some time. What compelled you to start using it, and how have you developed its usage for these new works?

VG: The material is an inspired form of a seed. When I started using it, I was looking for a material to sprawl on my drawings in order to create a new surface, like algae or termites covering a surface or object. I wanted to change the appearance of a surface. The process of working with this material is very important for me as I am able to see the deconstruction of my real image of a situation, replaced by the reconstruction of the image with this new, glittery, gold material. Metaphorically, the material alludes to the vulgarity of our greedy times, and creates a tension between the image, material and viewer.

AB: And this vulgarity relates to all issues stemming from sustainability problems in general?

VG: It’s a condition taking place worldwide – to look at the issue of sustainability at this point in time in human existence. I am a city person, and feel that cities unite by bringing people together; but sometimes they divide for exactly the same reason. This force induces daily struggles and concerns.

I would like to conclude with part of a manifesto – Brouwntoys 4000 AD by the artist Stanley Brouwn –that helps to elucidate my thoughts further:

When science and art are entirely melted together to something new.
When the people will have lost their remembrance and thus will have no past, only future.

• Vibha Galhotra: Absur-City-Pity-Dity is at the Jack Shainman Gallery, New York, until 5 December 2015. 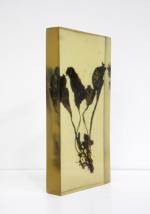 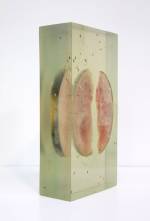 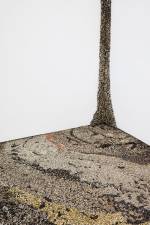 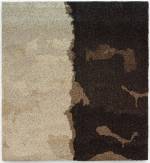 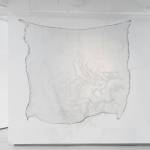