Some kind of magic in the King

Some kind of magic in the King’s Wood nights

Marcel Proust, in his text Swann’s Way, tells us how sound describes the shape and quality of an environment: “I could hear the whistling of trains, which now nearer and now further off, punctuating the distance like the note of a bird in a forest, showed me in perspective the deserted countryside …”1 And when the naturalist and transcendental poet Thoreau listened to the sound of a bell through the woods, he understood that as the soundwaves travelled through the wood, they became infused with the timbre of the trees and the undergrowth, and so it could be said that he was in fact listening “... to the voice of the wood”2 itself. A recent John Cage Night3 at The South Bank’s Queen Elizabeth Hall saw Cage’s pioneering sound works performed by the ensemble Apartment House.4

Often known as the “Father of American Experimental Composition, John Cage reinvented the very nature of what could be considered music”,5 changing the possibilities of sound art and musical composition forever. Amongst the evenings collection of well-known works Apartment House performed Child of Tree for Solo Percussion. One man stood behind a table, on which various natural objects were arranged; some beside microphones, others taped with pick up mikes, teasels, a cactus, sticks, seed pods, fir cones and flat stones. Gradually as though conducting a slow experiment, the performer played these objects, tapping, pinging, stroking, rubbing, clicking, shaking, popping, and from each object there came a startling unexpected sound.

More than sonic waves reflecting and refracting off materials they pass, and describing the space in which we inhabit, or the soundings from the surfaces of natural things, artist Lee Patterson following in Cages fascination in exploring the soundings of objects and using contact microphones actually delves into “... solid objects …”6 to listen to sounds embedded within.

Patterson’s residency commissioned by Stour Valley Arts “... was split between Ashford and King’s Wood. The Fold project was concerned with … attempting to rectify the problem of how to integrate or fold urban sounds from the south of Ashford into the sounds of King’s Wood in a coherent and interesting fashion”.6

Stour Valley Arts (SVA), initiated by director Sandra Drew,began commissioning work by artists in 1994. They invite artists to “spend long periods [in King’s Wood], as a consequence of their close and sympathetic involvement with the forest, [artists] often use natural materials found in the immediate area, and engage with seasonal and growing cycles”.7 SVA have now accumulated works by artists such as Chris Drury (Coppice Cloud Chamber, 1998), Rosie Leventon (Ring and B52 2004) and Jem Finer (Score for a Hole in the Ground, 2005). The majority of these works are constructed from natural materials – “visitors may see the ‘ghosts’ of previous sculptures now being reclaimed by nature”8 – andwalking the paths of King’s Wood to happen upon the remains of a sculptural mound, is likely to haunt the rural dreams of any city dweller for weeks.

Describing his sonic practice Patterson explains: “When using contact microphones and hydrophones, I tend to think of the act more as auscultation rather than microscopy, one is able to listen to the inside of things rather than see the surface.”9 This eavesdropping conjures into this author’s minds ear a rich and complex narrative. Two Peanuts Burn (available on line10); seems to begin with someone having difficulty tuning a radio, then a storm on a hill, a passing crowd of furious, some flaying electrical wires, a distressed animal, and finally as the two peanuts do at last burn, a sound like rain on a drum and popping corn. All that imagined from hearing the sounds of two peanuts cooking.

This extraordinary process might on the one hand be understood as a form of sonicology, (not the web-hacking type, but a correlation of biology and sound towards investigating the sonic presence within organic and or manmade forms), and on the other perhaps a magical conjuring that frees secret audio waves into the air. It was this conjuring that occurred on a September night in the rain, as a group of performance devotees sat on straw bales under large umbrellas in Stour Valley Arts’ King’s Wood, and listen to Paterson’s Fold. “I was interested in the sounds of the various tree species, insects, birdlife and the sounds of the elements (wind, rain! etc) and then how these compare with the sounds of the floodplain of south Ashford.”

And what a very English eccentric thing to do, to sit in the rain at night listening to the sounds of the wood, yet surely this was a positive sign; that even during times when so much focus is on financial worth, there are those who value listening together in the rain. The desire for collective contemplation must mean that despite ourselves we are still sane. And the inclement weather, the dripping branches, wet feet, the soft whistling, the hissing, the crackling and the wind, will stay with us.

“How or why none of the equipment failed or blew up is beyond me as is the fact that the rain stopped just as the performance did ...”11

My guess is that there’s some kind of magic in those King’s Wood nights, and as John Cage wrote in his Silence text “... the emotions of human beings are continually aroused by encounters with nature”.12

4. Apartment House was created by the cellist Anton Lukoszevieze in 1995. Under his Direction it has become a venerable exponent of avant-garde and experimental music from around the World. <http://www.apartmenthouse.co.uk/> [accessed 16 September 2011].

6. Lee Patterson in email conversation with the author 14 September 2011. 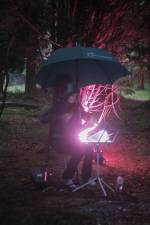