Through his devoted exploration of abstraction, Russian modernist Serge Poliakoff not only established himself as one of the most accomplished painters of his generation, but also as a master of his own style

The usual formula for a retrospective runs as follows: a range of interesting yet disappointing early sketches; a selection of lacklustre variations on a single theme; several years’ worth of accomplished, large-scale works and a series of late studies illustrating a longing for an unexplored theme. Perhaps this exact model is not too typical, but for many exhibitions attending to a wide time period, it is this idea of experimentation and development that often permeates. What is curious about the current exhibition of Serge Poliakoff’s work at Timothy Taylor Gallery, London, the first of its kind for more than 50 years and one that interlaces early and late works, is that it does not.

Poliakoff was born in Moscow in 1903 and enrolled in the Moscow School of Painting as a young man, but it was not within the capital’s walls that he cut his teeth. Fleeing the Russian Revolution in 1917, he moved through Constantinople, Sofia, Belgrade, Vienna and Berlin before settling in Paris in 1923. It was there that he spent the majority of his life, becoming a French national in 1962, but it was only after enrolling at the Slade School of Art in London that Poliakoff discovered abstract painting and the importance of layering. It was his appropriation of these concepts that, in future years, would solidify his status as an important member of the École de Paris, the European counterpart to American abstract expressionism that incorporated artists such as Jean Dubuffet, Hans Hartung and Jean Massagier. Poliakoff died in 1969.

In this latest exhibition, the gallery states: “Important late works are juxtaposed with a small selection of works from 1950 and 1951.” But while the dates may vary, the aesthetic appearance does not, with certain recurring similarities illustrating a ceaseless indebtedness to pure abstraction. With the influence of Wassily Kandinsky and Sonia and Robert Delaunay becoming instantly evident, the opening work of the exhibition, Composition abstraite (1967), is a two-tone canvas of vibrant blue and red. With brush marks left visible, the separation between the opposing shades cuts a jagged diagonal line across the face of the work. But it is not a line, not an outline at least. The colours are drawn together and meet each other directly, clashing as rivals for space. But this is not, in fact, a scene of conflict, for in this opposition they are balanced and therefore united. While the contrasting colours and the zigzagged divide that dissects the work may be unsettled and discordant, within this discord there is harmony. As the line bends away from the blue, the red gives, and as the red pushes back, the blue yields. An example of give and take, of cooperation.

This control of shape and colour is made more evident as the exhibition continues. Polyptyque (4 panneaux) (1966), Composition abstraite (1962) and Composition abstraite (1966) each feature a host of swirling, asymmetrical shapes compiled in a seemingly free composition, but as with the previous painting, no element of this is arbitrary. Each is worked to perfection. While colours may clash or merge, brushwork may be visible, and layering may be heavy, the works are undeniably complete. You could not imagine them in any other state.

Orange, jaune et vert (1964) and Composition abstraite (1969) are a testament to this measured approach. Regardless of the five years that separates their conception, the works appear to be related. Both are the same size and both are hectic canvases on which rough eye-shaped forms swerve and collide. The one difference is their opposing colour schemes: the first a wash of red, orange and ochre, the second a watered-down palette of faded yellow, navy and grey. But through this one calculated alteration, Poliakoff is able to entirely change the feel of the two works, leaving one as angry, volatile and charged, and the other as tired, aged and lackadaisical. The works pose a strong defence to any claims that Poliakoff’s abstraction – and all abstraction for that matter – is nothing but the visual reification of the random. Each canvas is perfectly weighted, judged and executed – far from simple, spontaneous or accidental.

And so what of the early works? Well, not much really. While they may be smaller in scale and slightly off balance in terms of their colouring, Bleu rouge (1951), Forme bleue sur fond rouge (1950) and the few other examples shown in the secondary gallery slip seamlessly into place as if the 15 years or so that separates them from the pack means nothing. This is not, however, to say that there is no visible progression in Poliakoff’s work, for the series of four canvases on the main wall, each titled Composition abstraite (1968) and each linked by a recurring claw-like shape, are undoubtedly the most accomplished of the show. This was something that the artist was aware of. Speaking of these late works, Poliakoff stated: “It is not necessary to explain these paintings, nor write about them – it is right to remain silent, your works should speak for themselves.”

If this were totally accurate, then my presence here would be much less noticeable, but there are elements of truth in the artist’s claim. These works do not allude to exterior concepts or draw inspiration from physical forms. Rather, they exist solely within their frames. There is nothing to grasp on to, no hints, no clues, and, as a result, the mind sets to work. Shapes are relegated, promoted, sidelined. Links are drawn only to slacken. Colours become bolder and fade to nothing. Akin to Kazimir Malevich’s much-lauded Black Square (1915), the works are ground zero. They provide absolutely nothing, and in doing so inspire the mind to jump into action. Before you know it, an hour has passed and the works have fully spoken for themselves.

Poliakoff is an artist who does not stray too far from his well-trodden path. He does not vary and he does not experiment, but in no way does this impede his facture. It may not be the most exciting process to follow, especially not for the viewer, but it is one that allows him to gain a comprehensive grasp of his layering, his palette and his shapes, and to draw them together in perfect balance. We may long for the dog-eared arrays of early colour samples and the questionable collections of introverted self-portraits that retrospectives have conditioned us to expect, but, unfortunately, this not how Poliakoff works. He sets his eye on a theme and thoroughly explores it, and it is due to this steadfast dedication to a singular discipline that he is able to sidestep the often-perilous stages of early trial and error and move towards something more akin to accomplished mastery. 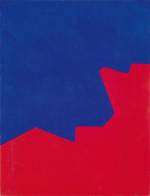 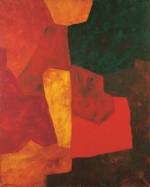 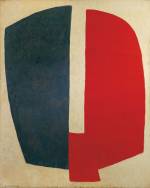 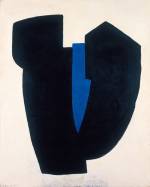