In this exhibition, the Portuguese painter Rui Macedo not only questions the historical place of modernism, but visually re-evaluates the history that came before it, playing with perspective, illusion and trompe l’oeil

Rui Macedo, who was born in the Portuguese city of Évora in 1975, started working as a painter at the end of the 1990s, in emotional and artistic kinship with graduate colleagues from Faculdade de Belas Artes in Lisbon, including José Batista Marques, Jorge Lancinha, José Lourenço and Manuel Caeiro. This group of young artists shared an interest in painting at a time when its practice was questioned by several important Portuguese critics.

Since then, Macedo’s activity as painter has veered into a territory where image and figure are used in a sort of exegesis of modernist painting, reinstating possibilities such as perspective, illusion and the mechanisms of trompe l’oeil, which modernists had gradually tried to banish. What has come to interest Macedo, however, is not some return to a pre-modern era of painting (before Matisse, Mondrian or Malevich), or any post-modern acrobatics that might catch shattered pieces of naturalism. Rather, he is seduced by the flux of theatrics surrounding painting – from the connections between its internal elements to the interaction of that structure with the external, tangible exhibition space.

His exhibition Memorabilia reflects his concerns, in that it not only questions once more the historical place of modernism, but visually re-evaluates the history that came before. Curated by Brazilian-born Caroline Menezes, the exhibition takes place at the Convento dos Capuchos on the south bank of the river Tejo, near the city of Almada. This 16th-century convent, which was originally used by Franciscan monks, has been restored and turned into a cultural centre.

Memorabilia, which is spread over different areas of the building, has three separate chapters, so it is fortunate that the space includes three distinct areas with clearly defined previous functions – a cloister, a church and a room normally used as exhibition space. Macedo was by no means indifferent to this when he conceived his interventions. In the cloister, for example, a place of religious meditation par excellence, Macedo limited his intervention to a textual fragment by French philosopher Jean-Luc Nancy that reflects on the three religions of the book placed at eye-level on the walls of the quadrilateral space. The text, the subject of the text and the conditions therein invested, however, work as an introductory essay announcing to visitors that the word, the image and the multiple theatres they build together will be decisive in what they will see next.

In the exhibition room, Macedo challenges the overly coded exhibition context, giving full primacy to what is already there – the display cases – and creating the illusion that behind them are hidden paintings which, in the end, exist no more than what you see. In this way, Macedo creates a ploy that mocks the exhibition space itself and its limitations, creating “shaped canvas” paintings that seem to hide behind it, or emptying the subject of the painting on canvases that represent frames only. The mechanism invoked here is trompe l’oeil, an optical game with several possible versions that arise in Macedo’s scenographic logic, proving that, in art, the way you say or show something is as important as what you say or show.

Trompe l’oeil, as a major device of painting and its relationship with architecture, was – especially in its golden period during the baroque age – a process of adaptation of a vision to a pre-existing religious discursive rhetoric that the relationship between scale and light poured into an immanent visual discourse. In the early-20th century, art promoted the self-referentiality of painting – that is, it turned it into a screen that could, in general, ignore the spatial environment in which it found itself. By contrast, much of the art made at the end of the 20th century and the beginning of the current one is witness to a reunion and a renewed commitment between art and its context. This is attested, for example, in the practice of minimalist artists, where the relationship between the work and the space were as important as the work itself (the “complexity” that Donald Judd spoke about) – or the movements that followed him, such as Land art or installation.

But if a metal cube necessarily relates to the space where it is exhibited, how does a painting relate – not an abstract painting, but a figurative one, with iconographic content? Macedo addresses that possibility, operating within the internal and virtual space of the painting, but conceiving it in close connection to an operation in the real and tangible space that will receive it. This is, therefore, the history – the inside and the outside – of an illusion in which we live permanently, in an indistinct manner with the body and mind, with things and images.

Inside the church, the challenge had an additional coordinate: the presence of the sacred, embodied in its specific architectural conditions and, above all, in the religious paintings of Franciscan subjects that inhabit the space and endow it with iconographic and narrative content. Instead of any kind of iconoclastic confrontation or anthropological critique of the original religious context of the place, Macedo opted for something less obvious, more productive and more difficult. If, in the three moments of exposure, the intervention of the Portuguese painter is a reflection on the nature of the connection between seeing and showing, in the church intervention it tries to approach the way that the pair (see and show) turns into rhetoric.

Look at the paintings, once again shaped canvas, that adapt to the corners of the room and are a commentary on the organisation of space, or look at their contents: in this a pomegranate, in that a piece of bread, in that other an orange, hazelnuts – actually, fruit and the bread of the Eucharist, and all, in each painting, illuminated by a Caravaggian point of light that dramatises and, paradoxically, seems to make them more real.

Instead of denying painting and its historical possibility at the present, Macedo unsettles it, puts it in crisis, relieving it of its statutory centrality. This unsettling involves and commits all the elements that make up the intervention: pre-existing architecture and signs dwelling in it; a religious functionality that is extinct or passed into the artistic field. Adding not so much a set of new contents, but more a new emphasis that changes the meaning of what already exists.

There is something viral in the conception of this work that, while refusing the narrative of visual retraction undertaken by modernist painting and later implied in all requiems for painting in the final decades of the 20th century, still incorporates all its consequences. Macedo returns to the illusion with the distance of someone who beholds a concept, to dissect it, to shatter the illusion of the end of an illusion. 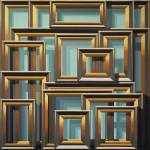 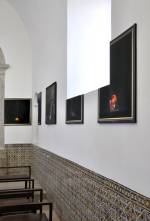